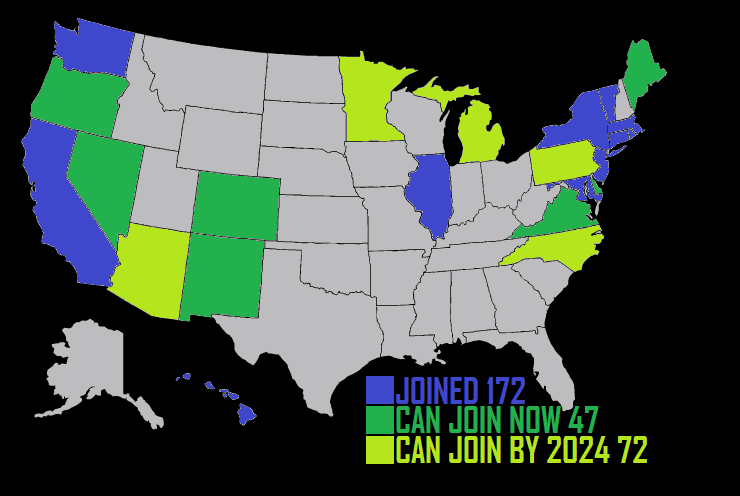 I was against this National Popular Vote Interstate Compact over the years after 2000 because I believed the conventional wisdom at the time: that such a result where the popular vote winner loses the Presidency is a rare event and an aberration, and that the electoral college more often than not favored Democrats than Republicans. That conventional wisdom has been turned on its head. Now this supposed aberration has happened twice in sixteen years, allowing the Republicans to have two Presidencies even though they have only won the popular vote once… ONCE… since the 1988 election. Thirty-one years!

So obviously, something must be done to reform the electoral college. But good luck amending the constitution. That could take years if not decades. You need a two-thirds majority vote of both houses of Congress to pass a proposed constitutional amendment. And that is just the first step. Then you need three-fourths of the states (38 states) to ratify the proposed amendment, either by their legislatures or special ratifying conventions. So yeah, good luck.

That brings us to the National Popular Vote Interstate Compact. This agreement would have every member state to the compact give its electoral votes to the national popular vote winner if enough states with a majority of electoral votes —270 in total—sign up. Once that threshold is reached, all presidential candidates would have to compete to win the national popular vote rather than the Electoral College vote, effectively ending the Electoral College without needing to amend the Constitution.

Colorado just passed the compact through their legislature this past work, and this was Senator Bryan Townsend’s reaction:

Delaware passed the compact through the House in 2011, but it never got through the Senate in that session. The House also had passed it in 2009, but again, the Senate was uninterested. But maybe Senator Townsend, the majority whip, can get them interested. And so maybe can the orange haired traitor in the White House.