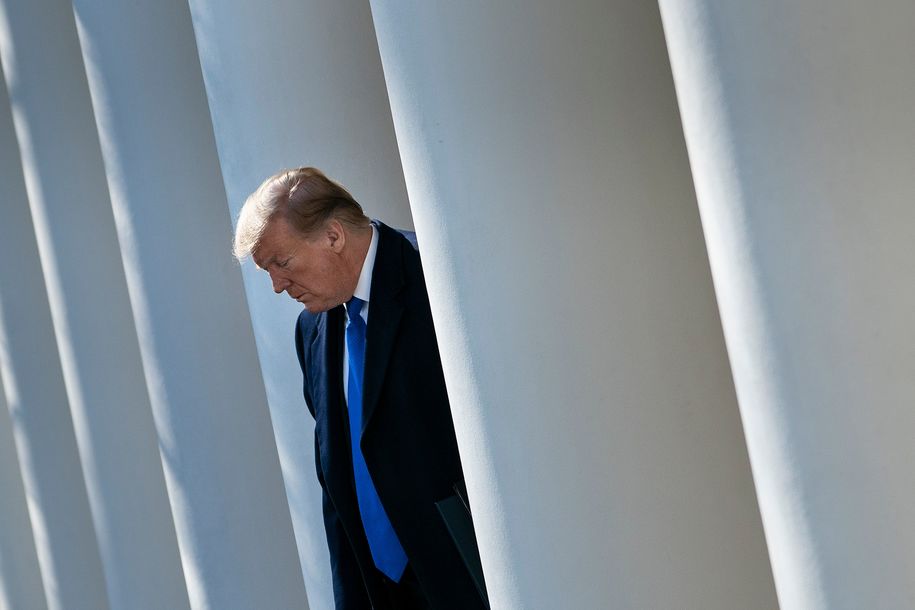 “Attorney General Bill Barr is preparing to announce as early as next week the completion of Robert Mueller’s Russia investigation, with plans for Barr to submit to Congress soon after a summary of Mueller’s confidential report,” CNN reports.

“The preparations are the clearest indication yet that Mueller is nearly done with his almost two-year investigation. The scope and contours of what Barr will send to Congress remain unclear. Also unclear is how long it will take Justice officials to prepare what will be submitted to lawmakers.”

Washington Post: “The special counsel’s investigation has consumed Washington since it began in May 2017, and it increasingly appears to be nearing its end, which would send fresh shock waves through the political system.”

“A U.S. Coast Guard lieutenant and self-identified white nationalist has been arrested after federal investigators uncovered a cache of weapons and ammunition in his Maryland home that authorities say he stockpiled to launch a massive domestic terror attack targeting politicians and journalists,” the Washington Post reports.

Christopher Paul Hasson called for “focused violence” to “establish a white homeland” and dreamed of ways to “kill almost every last person on earth.”

My attempt to make sense of this jaw-dropping Saudi nuclear scandal:https://t.co/xR5MYykdYr

“A Politico review of recent data extracted from Twitter and from other platforms, as well as interviews with data scientists and digital campaign strategists, suggests that the goal of the coordinated barrage appears to be undermining the nascent candidacies through the dissemination of memes, hashtags, misinformation, and distortions of their positions. But the divisive nature of many of the posts also hint at a broader effort to sow discord and chaos within the Democratic presidential primary.

“The cyber propaganda — which frequently picks at the rawest, most sensitive issues in public discourse — is being pushed across a variety of platforms and with a more insidious approach than in the 2016 presidential election … Over a recent 30-day period, between 2 and 15 percent of all Twitter mentions of the four candidates emanated in some way from within that cluster of [roughly 200] accounts.”

NowThis has obtained footage of Fox News host Tucker Carlson calling historian Rutger Bregman a “tiny brain moron” during an interview that the cable channel is now refusing to air.

Carlson added: “Why don’t you go fuck yourself.”

A new University of Massachusetts Amherst poll in New Hampshire finds Joe Biden leading the Democratic field with 28%, followed by Bernie Sanders at 20%, Kamala Harris at 14% and Elizabeth Warren at 9%.

Another 14% said they were “undecided” about what Democrat they would support in the hypothetical 2020 primary matchup.

Why the US Supreme Court’s new ruling on excessive fines is a big deal https://t.co/WE0IH4CtmA

Washington Post: “The court on Wednesday ruled in favor of Tyson Timbs of Marion, Ind., whose $42,000 Land Rover SUV was seized after his arrest for selling a couple hundred dollars’ worth of heroin. Timbs drew wide support from civil liberties organizations that want to limit civil forfeitures, which they say empower localities and law enforcement to seize property of someone suspected of a crime as a revenue stream.”

“After two weeks of efforts, Israeli Prime Minister Benjamin Netanyahu succeeded in forming a united ultra right-wing party that will run in the April 9 elections, paving the way for Jewish supremacists from the ‘Jewish Power’ party to make it into the next Knesset,” Axiosreports.

“This is an unprecedented development in Israel’s history and is equivalent to a U.S. president cutting a political deal with David Duke, the former KKK leader. The prime minister and the ruling Likud Party are legitimizing a racist, xenophobic and homophobic fringe party in hopes of bolstering a right-wing bloc after the elections.”

Israel has an apartheid government and it must be sanctioned.

Oregon lawmakers are pushing a bill that would amend the state’s constitution to lower the voting age in the state from 18 to 16, the Oregonian reports.

“Pressing issues affecting young people have brought the voting age down before. It used to be 21 before the 26th Amendment to the U.S. Constitution, ratified in 1971, lowered it to 18. The amendment was fueled in part by teenagers facing the draft for the Vietnam War, which had become increasingly unpopular.”

Like Bernie Sanders, Trump sees socialism as a political winner—only as a weapon against his opponents, writes @GrahamDavidA: https://t.co/GMEReMHtnZ

Washington Post: “[Chief Justice] Roberts was pointed in saying the Texas Court of Criminal Appeals has ‘misapplied’ a 2017 ruling that instructed that court to reconsider its analysis of whether death-row inmate Bobby James Moore was intellectually disabled, and thus ineligible for execution. Less than two weeks ago, Roberts joined the liberals in stopping a Louisiana abortion law that was nearly identical to a Texas law the court had struck down in 2016.”

“Roberts’s role in the abortion and death penalty cases were notable partly because he had been in dissent in the original decisions.”

Barack Obama is offering advice on how to approach Trump in the presidential election https://t.co/j6pfYzVqRi

Nick Ackerman: “The possibility of Manafort really cooperating after being hammered with a huge sentence has been hardly mentioned in the press. This failure to recognize what might happen next with Manafort is premised on the faulty assumption that Manafort’s long trail of lies and duplicitous dealings with the government nullifies his ability to be an effective witness. In my experience as a prosecutor, however, this is not necessarily the case.”

“Under the Federal Rules of Criminal Procedure, Manafort has up to one year after the date of his sentencing to ask the court for a reduction of sentence based on cooperation. Thus, under the law it is not too late for him to cooperate.”

More Virginia voters than not say Gov. Ralph Northam should stay in office despite revelations that he appeared in blackface years ago, according to a new poll from Quinnipiac University.

There’s similarly a 36 to 36 percent split among all voters over whether Lt. Gov. Justin Fairfax should resign. Fairfax has been accused by two women of sexual assault.

“Isgur joined the administration in 2017 after overcoming resistance from the president, who balked at bringing on a political operative who had trashed him on the campaign trail. As deputy campaign manager for Carly Fiorina’s presidential campaign, and in the months after Fiorina bowed out of the race, Isgur repeatedly laced into Trump… While it is common for departing administration officials to join cable news networks as analysts or contributors, it is less common for them to oversee news coverage. Isgur has no experience in news but a long history as a political operative.”

Margaret Sullivan: CNN’s hiring of a GOP operative as political editor is even worse than it looks.

“The feud between President Donald Trump and Beto O’Rourke over immigration resumed at a distance on Tuesday, driving the politics of a border wall further into the 2020 presidential campaign,” Politico reports.

“Tying his political identity to this heavily Hispanic, heavily Democratic region of the Southwest, the former Texas congressman has seized on Trump’s border politics to create an opening for himself in the Democratic primary.”

O’Rourke acknowledged he is considering runs for president and the Senate in 2020 and said he plans to decide on “what it is we do next” by the end of February, CNN reports.

Said O’Rourke: “I’m trying to figure out how I can best serve this country — where I can do the greatest good for the United States of America. So, yeah, I’m thinking through that and it, you know, may involve running for the presidency. It may involve something else.”

“With their second summit fast approaching, speculation is growing that President Donald Trump may try to persuade North Korean leader Kim Jong Un to commit to denuclearization by giving him something he wants more than almost anything else: an announcement of peace and an end to the Korean War,” the AP reports.

“Such an announcement could make history. It would be right in line with Trump’s opposition to ‘forever wars.’ And, coming more than six decades after the fighting essentially ended, it just seems like common sense. But, if not done carefully, it could open up a whole new set of problems for Washington.”

Meanwhile, Reuters reports that veteran North Korean diplomats “are being sidelined from nuclear talks ahead of a second summit with the United States as recent defections and allegations of spying undermine the trust of leader Kim Jong Un.”

“A trove of more than 800 pages of emails sheds new light on the working relationship between Transportation Secretary Elaine Chao and Senate Majority Leader Mitch McConnell, one of the most potent power couples in Washington — including their dealings with McConnell supporters from their home state of Kentucky,” Politico reports.

“Chao has met at least 10 times with politicians and business leaders from the state in response to requests from McConnell’s office… In some cases, those people later received what they were hoping for from Chao’s department, including infrastructure grants, the designation of an interstate highway and assistance in getting state funds for a highway project — although the documents don’t indicate the meetings led to those outcomes.”