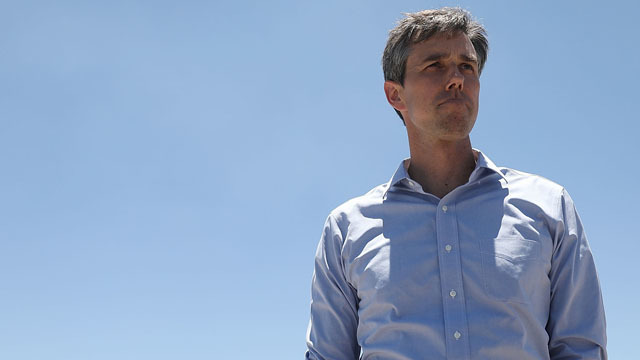 Two Democratic campaign strategists told Politico that they are in discussions with Beto O’Rourke and his team. One of the strategists described those conversations as moving to “an operational level” after weeks of discussing 2020 in more theoretical terms.

“O’Rourke’s advisers had been speaking with Democratic strategists for months about a potential campaign, but only at a relatively abstract level… But after a massive rally in his hometown of El Paso this week, O’Rourke is now becoming personally involved in discussions about the shape of a 2020 campaign, the strategists said.”

Special counsel prosecutors said for the first time that they have evidence of Roger Stone communicating with WikiLeaks, CNN reports.

During its investigation of the Russian hack of the Democrats, “the government obtained and executed dozens of search warrants on various accounts used to facilitate the transfer of stolen documents for release, as well as to discuss the timing and promotion of their release.”

“Investigators on Monday will begin revealing the breadth of an alleged ballot-tampering scheme in North Carolina, launching a potentially bitter and partisan battle over how to fill a congressional seat that has remained vacant since January,” the Washington Post reports.

“The election has been in limbo since November, when evidence surfaced that a political operative paid by Republican candidate Mark Harris had assembled a crew of election workers to collect mail-in ballots from voters, a felony in North Carolina. With Harris leading Democrat Dan McCready by just 905 votes, the board declined to certify the results and launched a wide-reaching investigation instead.”

Politico: “[Kamala Harris] has been activating her forces on the home front since launching her White House bid last month — cornering some of the state’s most prolific donors, locking down big endorsements and homing in on a statewide blueprint to rack up early delegates.”

“California’s Super Tuesday primary is foundational to Harris’ plans to win the nomination. Her home-state advantage is an enormous asset, holding the promise of a huge haul of delegates early in the nomination fight. At the same time, a poor performance there could end her bid.”

“Well aware there’s no guarantee of success, Harris and her team of longtime operatives there started working the state long before many of her 2020 Democratic rivals arrived for their first fundraisers and retail campaign stops.”

“President Trump on Friday pointed to nearly five dozen previous instances in which presidents of both parties have declared emergencies as justification for his invocation of extraordinary powers to build his border wall. But there is no precedent for what he has just done,” the New York Times reports.

“None of the times emergency powers have been invoked since 1976, the year Congress enacted the National Emergencies Act, involved a president making an end run around lawmakers to spend money on a project they had decided against funding.”

Washington Post: How Trump came to declare a national emergency to fund his border wall.

“President Trump’s decision to unilaterally attempt to build his promised wall at the Mexico border is pulling his party into a tailspin of drama and unease — a move that could help his own 2020 reelection effort even at the expense of fellow Republicans,” the Washington Post reports.

“Trump’s bid to circumvent Congress puts GOP lawmakers — including many vulnerable senators up for reelection in the next cycle — in the position of having to choose between their party’s leader and their self-described opposition to executive overreach.”

“If they back Trump’s emergency declaration, many lawmakers worry, they will be greenlighting a White House power grab that infringes on Congress’s constitutional power over spending. But if they oppose it, they risk attracting the wrath of Trump’s political base — and perhaps a primary challenge.”

New York Times: “The president’s move left Senate Republicans sharply divided, and it remains to be seen whether they will act collectively to try to stop Mr. Trump or how far into unchartered territory they are willing to follow a headstrong president operating with no road map beyond his own demands.”

“The Republican resistance to Mr. Trump’s emergency declaration was much more pronounced in the Senate than in the House, where a few Republicans — in the minority but more closely aligned to Mr. Trump — groused. But most of the conservative rank and file embraced it.”

Prosecutors for special counsel Robert Mueller said in a new court filing that President Trump’s former campaign manager Paul Manafort is facing a sentence of 19.5 to 24.5 years in prison for the financial crimes for which he was convicted in a Virginia court last August.

Vice President Pence got no reaction from U.S. allies when he mentioned President Trump to U.S. allies at a security conference in Munich. Said Pence: “I bring greetings from the 45th president of the United States of America, Donald Trump.” He was met with a lengthy silence.

John Cassidy: “Arguably, the most revealing exchange came when Peter Alexander, of NBC News, asked Trump to admit that the spending deal he was to sign later in the day gave him less money for his wall than he could have got before the government shutdown. Of course, Trump never admits anything. He insisted that he’d got ‘billions and billions of dollars for other things—port of entries, lots of different things’ from Congress. But, when it came to the wall, he went on, ‘they skimped.’ Then he added, ‘So I did—I was successful in that sense, but I want to do it faster. I could do the wall over a longer period of time. I didn’t need to do this, but I’d rather do it much faster.’”

“It will be interesting to see what the courts make of Trump’s admission that, when it came time to declare a national emergency, he didn’t ‘need to do this.’ At the least, it was good to get it on the record from his own lips. Inside the Reagan Administration there used to be a saying: ‘Let Reagan be Reagan.’ In the Trump Administration such a statement would be entirely redundant. The President lets it all hang out: the incoherence, the fabrications, the mendacity, the raging but delicate ego, the attention-deficit disorder, and, occasionally, the revealing shards of self-illumination. He just can’t help himself.”

“New Jersey’s attorney general has stepped into the investigation of President Trump’s $107 million presidential inaugural fund, issuing an administrative subpoena for the fund’s financial records, including any that document fund-raising in the state,” the New York Times reports.

“The New Jersey subpoena also demands records of any contributions made on behalf of foreigners, who are barred from contributing to inaugural funds, campaigns or political action committees in the United States.”

House Oversight Committee Chairman Elijah Cummings (D-MD) said that his panel received new documents showing that two attorneys for President Trump may have lied to government ethics officials about Michael Cohen’s payments to women alleging affairs with the president ahead of the 2016 election, Politico reports.

Said Cummings: “It now appears that President Trump’s other attorneys — at the White House and in private practice — may have provided false information about these payments to federal officials.”

Amy Walter: “There’s something of a consensus forming that the ‘easiest’ or least risky electoral path for the Democratic nominee in 2020 is to reconstruct the so-called Blue Wall in the industrial midwest. If the Democratic nominee wins every state Hillary Clinton carried in 2016, plus Wisconsin, Pennsylvania and Michigan, that Democrat would win 278 electoral votes — eight more than the 270 needed to win.”

“Just as important, it means that Democrats wouldn’t need to sweat Ohio or Florida. They can lose those big, electoral-vote-rich states, and still have enough to win the White House.”