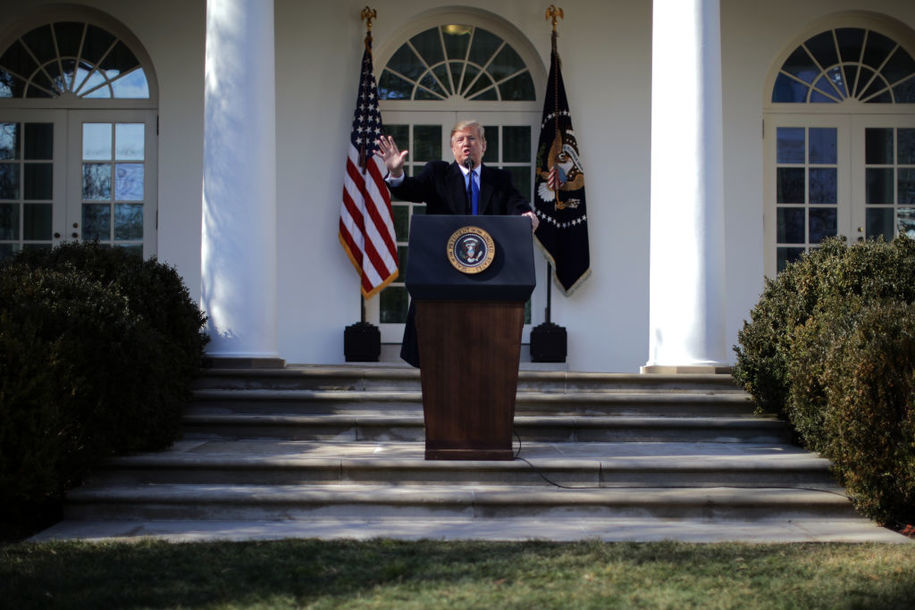 “President Trump formally declared a national emergency at the border on Friday to access billions of dollars to build a border wall that Congress refused to give him, transforming a highly charged policy dispute into a fundamental confrontation over separation of powers,” the New York Times reports.

“The president’s decision, previewed on Thursday, triggered instant condemnation from Democrats and some Republicans, who called it an abuse of power. House Democrats plan to introduce legislation to block the president’s move, which could pass both houses if it wins the votes of the half-dozen Republican senators who have criticized the declaration. That would put the president in the position of issuing the first veto of his presidency.”

“[O]ne thing is certain: There will be lawsuits. Lots of them. From California to Congress, the litigants will multiply,” the Washington Post reports.

“They will file suit in numerous jurisdictions — certainly within the U.S. Court of Appeals for the 9th Circuit on the West Coast, in U.S. District Court in Washington and maybe even in New York. That’s been the pattern in the hundreds of lawsuits, many of them successful, brought against the Trump administration, the idea being that some judge somewhere will block the wall.”

New York Times: “As a matter of legal reality, the proposal is likely to be bogged down in a court challenge, leaving any actual construction work based on emergency powers spending an uncertain and, at best, distant prospect.”

“After three weeks of pained negotiations to keep the federal government open, President Trump almost blew the whole thing up again on Thursday,” the Washington Post reports. “Headed for another defeat on his signature promise to make Mexico pay for a southern border wall, the president was frustrated after a briefing by Homeland Security Secretary Kirstjen Nielsen and others on details of the final deal to avoid a shutdown.”

“Trump threatened not to sign the legislation, the officials said, putting the government on the brink of another damaging shutdown. Senate Majority Leader Mitch McConnell (R-KY) was on the phone with Trump at least three times during the course of the nerve-racking day, pressing him to stay the course and asserting that Democrats had actually lost the spending fight.”

Jeff Greenfield: “It is now clear that, consciously or not, Trump was delivering a warning to the Republican Party about what he was going to do to it. Two years into his administration, Trump has recognized that the institutional power of the Republican Party has all the effectiveness of the Maginot Line. He can ignore its leaders, scorn them, or just smash through them with no lasting political damage.”

“Trump’s declaration of a national emergency along the U.S.-Mexico border is a high point, or low point, of a familiar pattern that is right out of Groundhog Day—or the Netflix series Russian Doll. Again and again, Trump embraces a policy, or reveals a character trait, that hits at the heart of what the Republican Party claims to stands for. In response, there is unhappiness, even anger, but never action.”

“If you think the Republicans in Congress are going to stand up to Trump’s fake national emergency in order to defend the party’s long-held principles, or to assert the constitutional authority of the legislative branch, you haven’t been paying attention for the past three years. Trump said he would win so much that you’d get tired of winning—the lone arena in which this is objectively true is how he has imposed his will on his fellow Republicans, who have surrendered abjectly to him.”

“The Supreme Court will decide whether the 2020 census can include a question about citizenship that could affect the allocation of seats in the House of Representatives and the distribution of billions of dollars in federal money,” the AP reports. “The justices agreed Friday to a speedy review of a lower court ruling that has so far blocked the Trump administration from adding the citizenship question to the census for the first time since 1950.”

Politico: “For Stone, the gag order was more a matter of when, and not if. The longtime GOP campaign operative and frequent TV commentator who hosts his own daily webcast has been on a media blitz since his indictment last month. He called into the conspiracy theory website InfoWars to give his first interview following his arrest.”

Tim Miller: “I do not offer this possibility lightly. I know that the Trump administration and its allies take very seriously false accusations of health problems. And I am aware that the president just recently received another glowing review from the plenipotentiary vice-minister of medical services in the White House and has in the past availed himself of the top-of-the-line medical advice that is afforded the wealthy in our free market system.”

“But even so, I feel compelled to abide by the DHS mantra of ‘see something, say something,’ so here it is.” “The president seems to be hallucinating about marauding Hispanic invaders. I think we should be concerned.”

“The Justice Department has warned the White House a national emergency declaration is nearly certain to be blocked by the courts on, at least, a temporary basis, preventing the immediate implementation of the president’s plan to circumvent Congress and build the wall using his executives powers,” ABC News reports.

Washington Post: “House Democrats are gearing up to pass a joint resolution disapproving President Trump’s emergency declaration to build his U.S.-Mexico border wall, a move that will force Senate Republicans to vote on a contentious issue that divides their party.”

Washington Post: “He didn’t read intelligence reports and mixed up classified material with what he had seen in newspaper clips. He seemed confused about the structure and purpose of organizations and became overwhelmed when meetings covered multiple subjects. He blamed immigrants for nearly every societal problem and uttered racist sentiments with shocking callousness. This isn’t how President Trump is depicted in a new book by former deputy FBI director Andrew McCabe.”

“Instead, it’s McCabe’s account of what it was like to work for then-Attorney General Jeff Sessions. The FBI was better off when ‘you all only hired Irishmen,’ Sessions said in one diatribe about the bureau’s workforce. ‘They were drunks but they could be trusted. Not like all those new people with nose rings and tattoos — who knows what they’re doing?’”

The U.S. commander who has been leading the war against ISIS told CNN that he disagreed with Donald Trump’s decision to pull troops out of Syria and warned that the terror group was far from defeated, in a stark public break with the President. Said Gen. Joseph Votel: “It would not have been my military advice at that particular time… I would not have made that suggestion, frankly.”

Votel said that he “was not consulted” before Trump’s controversial announcement late last year that the U.S. would rapidly withdraw its troops from the war-torn country.

President Trump “plans to use unilateral authority to spend more than $8 billion to construct physical barriers along the U.S.-Mexico border… a maneuver that risks provoking a lengthy legal battle over presidential powers,” Bloomberg reports.

“The president will invoke an emergency declaration to redirect $3.5 billion Congress approved for the Defense Department’s military construction budget, said another person familiar with the deliberations. Trump also will use his ordinary executive authority to reprogram $2.5 billion from the Defense Department’s drug interdiction efforts and $600 million from the Treasury department’s drug forfeiture program, said the person, who asked not to be identified to discuss plans ahead of announcement.”

Former Rep. Beto O’Rourke (D) said he would “absolutely” take down the border wall in El Paso, Texas, arguing that the structure has not made the city demonstrably safer, The Hill reports.

O’Rourke “is coming to the University of Wisconsin-Madison campus Friday for a meet and greet with students and faculty, a closely guarded event that will be the former Texas congressman’s first visit to a key state in the battleground, industrial Midwest,” the AP reports.

“In the early months of the Trump administration, with the president no longer running his family business, his eldest sons embarked on a plan to roll out two new hotel lines in dozens of American cities,” the New York Times reports.

“Now, in a striking reversal, the Trump Organization is no longer pursuing the signature initiative… Plans for the two hotel chains, Scion and American Idea, are to be shelved indefinitely, most likely for the remainder of the presidency.”

“Texas Republicans have long coasted to re-election while ignoring their Democratic opponents. Not anymore,” the Fort Worth Star-Telegramreports.

“For 2020, GOP incumbents in what has historically been one of the most solidly red states in the union are plotting offense-driven campaigns they hope will insulate them even if the party brand takes a nosedive.”

“Strategists and party operatives interviewed by the Star-Telegram say the approach comes after a number of long-serving Republicans notched closer-than-expected victories in 2018, while their party lost ground in the suburbs. Even popular lawmakers aren’t safe if Texas voters continue to move away from the GOP in the Donald Trump era, the strategists said. So they are aiming to more aggressively drive attention to their opponents instead.”