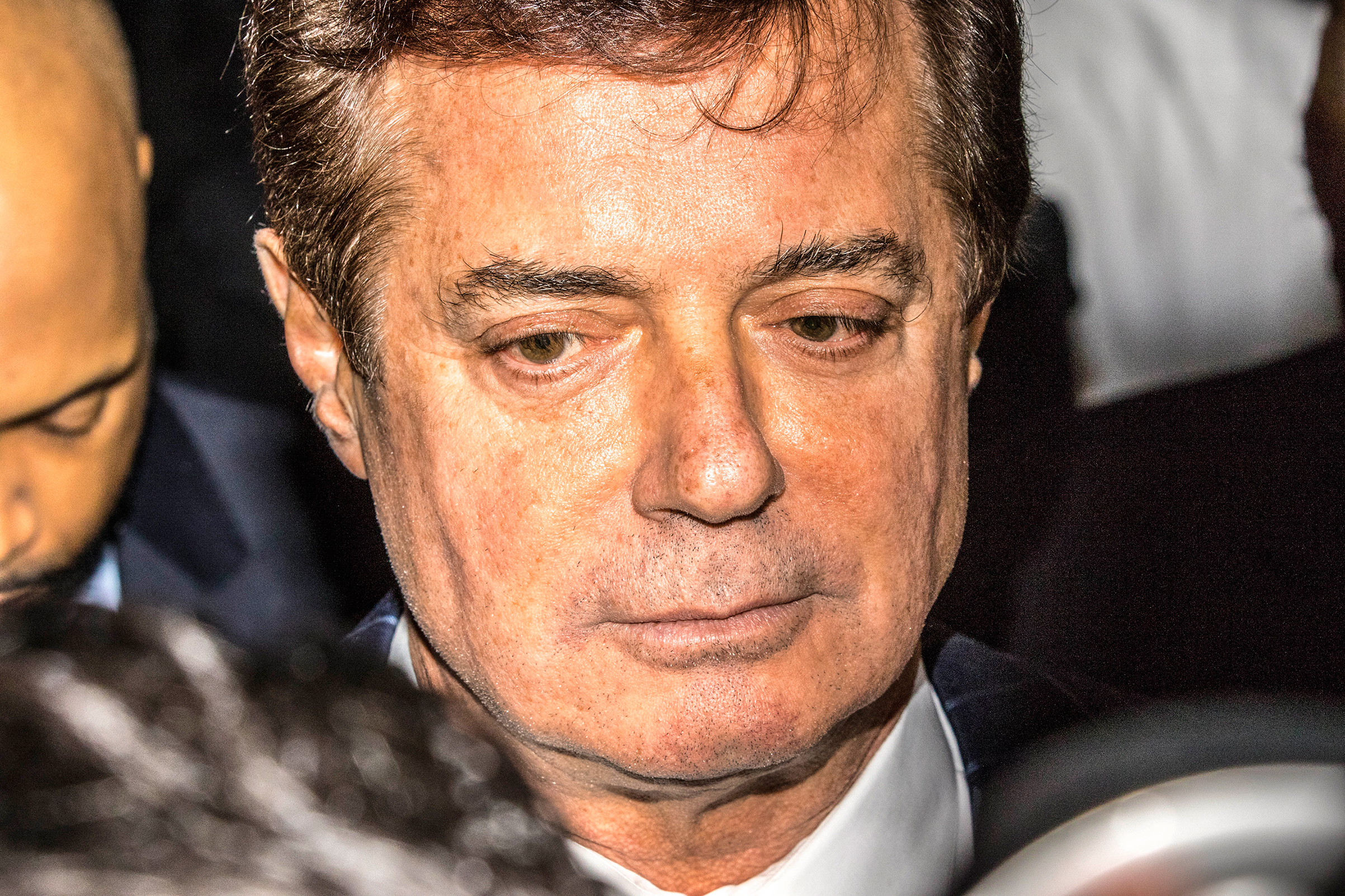 A federal judge ruled that Paul Manafort lied to prosecutors with special counsel Robert Mueller “about matters close to the heart of their investigation into Russian interference in the 2016 election,” the Washington Post reports. “The judge’s finding that Manafort, 69, breached his cooperation deal with prosecutors by lying after his guilty plea could add years to his prison sentence.”

“Manafort had denied intentionally lying after his plea deal, but U.S. District Judge Amy Berman Jackson of the District found he lied in three of five areas alleged by prosecutors. She said she would factor in his deception on other topics at sentencing March 13.”

“A super PAC closely linked to Paul Manafort is facing questions about why it failed to report a $1 million contribution received just before the 2016 presidential election,” TPM reports.

“In a Tuesday letter, the Federal Election Commission asked the Rebuilding America Now PAC for more information about the contribution, which the PAC first disclosed in an amended report in November 2018—some two years after the fact. The FEC letter raises new questions about the murky financial operations of the PAC, which was operated by two Manafort deputies.”

“Special counsel Robert Mueller is reportedly investigating whether Rebuilding America Now illegally received foreign funds and was connected to a scheme that Manafort allegedly lied about while purportedly cooperating with Mueller.”

Rep. Ilhan Omar (D-MN) grilled President Trump’s Venezuela envoy Elliott Abrams during a House Foreign Affairs hearing, arguing that she doesn’t understand why anyone should believe Abrams since he pleaded guilty to lying to Congress in the 1980s about the Iran-Contra affair, Axios reports.

“The House voted on Wednesday to end American military assistance for Saudi Arabia’s war in Yemen, a defiant and rare move to curtail presidential war powers that underscored anger with President Trump’s unflagging support for Saudi Arabia even after the killing of a Washington Post columnist, Jamal Khashoggi,” the New York Times reports.

“The 248-177 vote, condemning a nearly four-year conflict in Yemen that has killed thousands of civilians and inflicted a devastating famine, will pressure the Republican-controlled Senate to respond.”

Rep. Ilhan Omar (D-MN) responded to President Trump’s call for her resignation by accusing him of having “trafficked in hate your whole life” and questioning when he would learn from his experiences, as Omar said she has, the Washington Post reports. Said Omar: “I learned from people impacted by my words. When will you?”

“Top Republican leaders in the House said Wednesday morning that they’re not yet ready to endorse a border security funding deal reached by negotiators that would prevent another partial government shutdown,” NBC News reports. House Minority Leader Kevin McCarthy (R-CA) “said he would support the agreement if the final legislative text — which has not yet been released — reflects the overarching framework.”

Playbook: “The president told reporters this afternoon that he doesn’t want another shutdown but he would review the deal for ‘land mines.’”

“Speaker Nancy Pelosi urged her House Democratic troops to fall in line behind a border-security agreement that deprived President Trump of a win on his long-promised wall but gave more money for border fencing and detention beds than the left wing of her party wanted,” the New York Times reports. Said Pelosi: “As with all compromises, I say to people, support the bill for what is in it. Don’t judge it for what is not in it. We have other days to pass other legislation.”

James Hohmann: “Politics doesn’t have to be a zero-sum game. In this era of brinkmanship and braggadocio, when official Washington lurches from crisis to crisis, with shutdowns and smash-mouth politics, policymakers sometimes forget that one person does not need to lose for another person to win.”

“The Senate’s 92-to-8 vote last night to advance the biggest public lands bill in a decade, maybe even a generation, amid divided government is a case study for how lawmaking is supposed to work. There were compromises that delivered a little something for everyone across the ideological spectrum, even if no one really got everything they wanted. Unlike so much legislation that gets drafted at the last minute and passed in the middle of the night, this circulated and percolated for years. There were hearings, markups and good-faith negotiations. When a handful of holdouts tried to insert poison pills during the amendment process to torpedo the bill, Republicans and Democrats stuck together. It was old-school and harked back to a time when Congress worked.”

Nate Silver thinks Beto O’Rourke has the best shot at being someone’s running mate on the 2020 Democratic ticket. “Here’s why: 1) There’s about a 55 percent chance (per Betfair) that the nominee will not be a white dude. 2) If the nominee is not a white dude, the VP probably will be a white dude. 3) The other white dudes are too old (Joe Biden, Bernie Sanders) or would cost Democrats a Senate seat (Sherrod Brown). Hence, Beto.”

The problem with that though is that if Beto is not on his way to becoming the nominee himself, I’d imagine he will run for Senate in Texas. And to that end, Senate Minority Leader Chuck Schumer (D-NY) met with O’Rourke last week to discuss a possible 2020 Senate campaign against Sen. John Cornyn (R-TX) in 2020, Politico reports.

“President Trump has installed a room-sized ‘golf simulator’ game at the White House, which allows him to play virtual rounds at courses all over the world by hitting a ball into a large video screen,” the Washington Post reports.

“That system replaced an older, less sophisticated golf simulator that had been installed under President Obama… Trump’s system cost about $50,000, and was put in during the last few weeks in a room in his personal quarters.”

Michael Cohen’s lawyer told CNBC that his client will testify before three congressional committees before he enters prison on March 6. “Those panels include the House Oversight and Government Reform Committee, where Cohen’s testimony will be public. Cohen had previously indefinitely postponed his appearance at that committee due to fears for his family’s safety.” “Cohen’s testimony to the Senate Select Committee on Intelligence and the House Intelligence Committee will be closed.”

Former Vermont Gov. Howard Dean “is set to return to prominence as head of a new operation that Democrats hope puts them back on par with Republicans in the never-ending race to use voter data to drive Americans to the polls,” the AP reports.

“Dean confirmed that he’s signed on to lead a planned data exchange hammered out by DNC officials, state party leaders and Democratic consultants. The agreement still requires the expected approval from state party leaders gathering Wednesday in Washington, but it would end more than 18 months of internal party wrangling that has dogged DNC Chairman Tom Perez amid fights over money and control.”

“The arrangement would allow the national party, state parties and independent political action groups on the left to share voter data in real time during campaigns.”

“The Iowa Democratic Party laid out a proposal Monday that would add a major change to its presidential caucuses, allowing for absentee voting by phone on six different days through virtual caucuses,” Politico reports.

“The proposed change… would allow Democrats to phone in absentee votes, rating their presidential preferences in a ranked choice style. Previously, only those who physically attended the Iowa caucuses could register their votes.”

“Chuck Schumer is actively recruiting a celebrated fighter pilot to take on Mitch McConnell in 2020 — a calculated act of aggression against a leading Democratic foe,” Politico reports. “Schumer met with Amy McGrath, a Marine veteran-turned 2018 congressional candidate, at Democratic Party headquarters last month to pitch her on running against McConnell. McGrath listened and didn’t rule it out.”

“The U.S.’s financial burden is growing despite a strong economy,” Bloomberg reports. “Total public debt climbed to more than $22 trillion as of Feb. 11, according to a Treasury Department report Tuesday.”

USA Today: “The national debt has been rising at a faster rate following the passage of President Trump’s $1.5 trillion tax-cut package a little more than a year ago and as the result of congressional efforts to increase spending on domestic and military programs. The nation has added more than $1 trillion in debt in the last 11 months alone.”