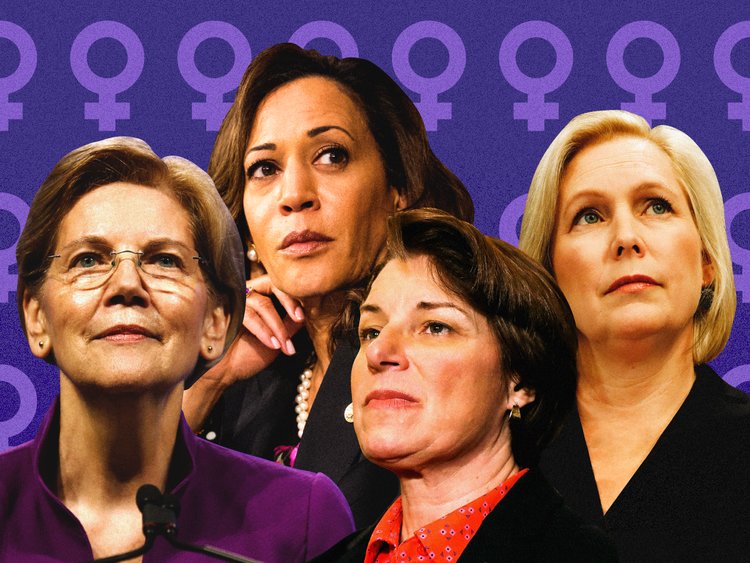 Let’s take this by candidate:

Senator Amy Klobuchar: Reports are that she’s “difficult”, “demeaning” and “cruel” to her staff. Words rarely applied to a male politician, many of whom get labeled as strong leaders with strong standards for behaving exactly the same way.

Brace yourself for the predictable tropes of mean girl and unlikable, along with the standard of not being nurturing or motherly.

Senator Kamala Harris: “Within 24 hours of Ms. Harris’s campaign kickoff, some critics were bringing up her onetime relationship with a powerful California politician, Willie Brown — a common tactic faced by women that sexualizes them and reduces their successes to a relationship with a man.”

Why this matters is beyond me, but it’s a common tactic to link women’s accomplishments to men. Which is a no-win game for women, since men have controlled the power levers for eternity and there’s no way a woman can rise in her career without interacting with men. And let’s not pretend that sex is the issue – women are always accused of sleeping their way to the top. If the bar is set for no relationships (romantic, friendships, mentoring) with men who can help your career, then may I suggest that golfing with your boss be considered disqualify.

Brace yourself for the predictable tropes of opportunist and power-hungry. Unlikable.

Senator Elizabeth Warren: Senator Warren has been putting out bold policy positions, but you’ll be forgiven for not knowing much about them due to the media’s incessant fixation on her heritage. Do I think she could have handle this better? Yes. Do I think this topic is worth the endless ink spewed on it? No. All this feels very familiar, no?

Trump and Republicans spew racist, bigoted and sexist trash every damn day and the press tsk tsks and then moves on. They even deem them worthy of commenting on other’s bad behavior, while ignoring their past (and present) racist, bigoted and sexist comments. It’s like getting a condemning quote from a KKK Imperial Wizard on the Northam situation.

You’d think they don’t have anything else to cover about Warren. They choose to cover this – they love it because it’s easy and lazy. But we knew from the start that they would when this question was posed: how she could “avoid a Clinton redux — written off as too unlikable before her campaign gets off the ground.”

She faced the same thing when she ran for senate:

If indeed any changes were made now, wouldn’t Warren be accused of being inauthentic?

I’m asking her to be more authentic. I want her to just sound like a human being, not read the script that makes her sound like some angry, hectoring school marm. But I hate to say it, about politics, but we live in a celebrity-based society, so a candidate for high office is considered a celebrity as well as a political figure. And so you’re judged as a celebrity is judged: by the way you present yourself.

Male or female celebrity? There’s a difference in how they’re treated, you know.

Brace yourself for the predictable tropes of unlikable, inauthentic and shrill.

What does “unlikable” mean when it comes to women in politics? Here’s a good answer: “The claim that a woman candidate is not “likable” is a code for saying she defies our shared cultural understanding that power and authority are implicitly male, and that women who claim them are illegitimate, threatening or breaking the rules. If it were possible for Warren to be “likable”, under this rubric, it would only be if she were able to adhere to prevailing ideas of what is appropriate behavior for her sex – that is, if she were not seeking public office at all.”

Kirsten Gillibrand: It’s not surprising that the very first question of her campaign was about her likeability: “A lot of people see you as pretty likable,” a reporter told her. Did she consider that a “selling point”?

You can set your watch by this nonsense. And male candidates are never asked this question. In fact, a lot of times a man being viewed as unlikable is portrayed as strength, toughness and leadership – and, of course, ruled by logic instead of emotion.

I’m not saying that voters don’t vote on likeability. I’m saying that the press needs to stop defining women candidates on this trait, thereby implanting and emphasizing the idea (over and over again) until voters think the candidate is “unlikeable” but can’t explain why. We know why.

I’m not getting into the fried chicken nonsense and how it suddenly made her inauthentic. I’ll just point out that the same behavior made Trump authentic:

I don’t even remember this happening. Guess we didn’t have a thousands of articles or endless televised conversations about this.

Amanda Marcotte sums it up best:

There’s no way for female politicians, in particular, to “win” the stupid food tests. Hillary Clinton was asked about hot sauce, which she actually knows a lot about, and was accused of “pandering”. You don’t know something, you’re a bimbo. You do, and you’re a fake.

Brace yourself for the predictable tropes on unlikeable, elitist and out of touch.

I’m just asking that we not do this again. Because this crap isn’t limited to one side of the aisle. I’m sure that makes me unlikable, but, as a women blogger, I’m use to that moniker. 😉

21 comments on “The Media’s Double Standard For Women Candidates”