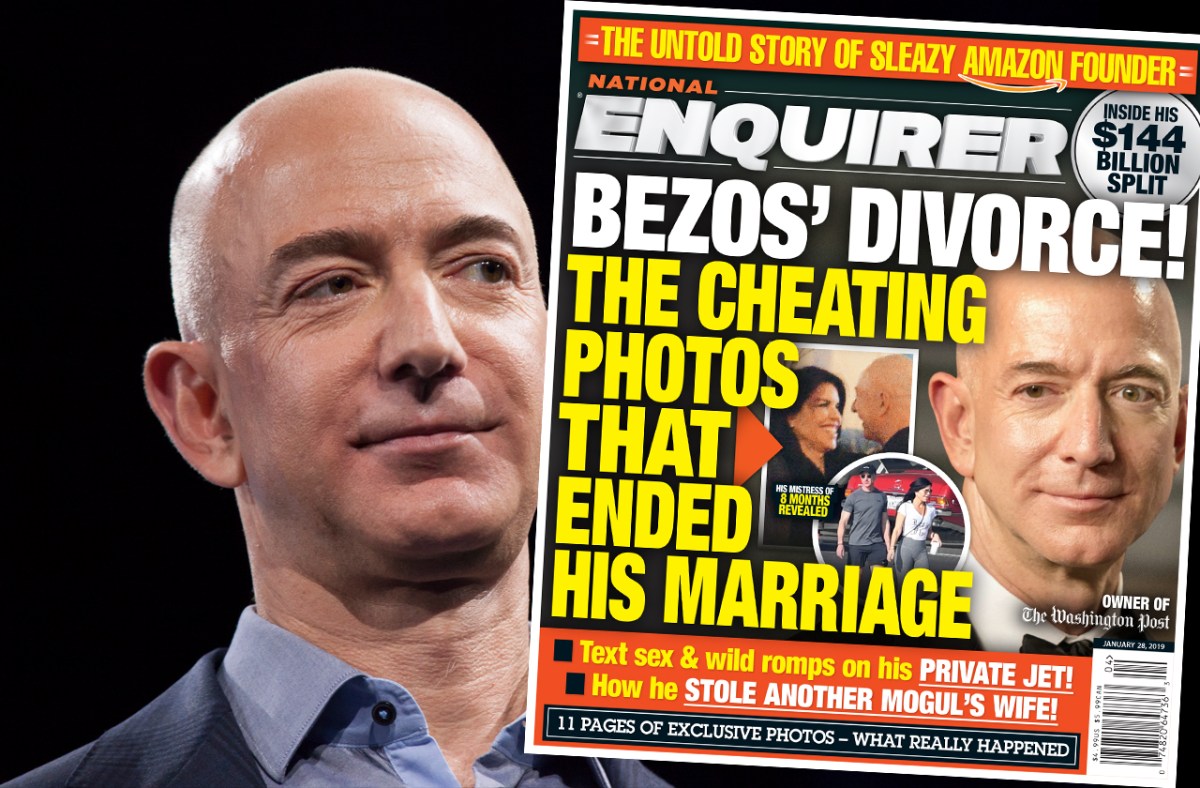 BEZOS BOMBS THE NATIONAL ENQUIRER. “Federal prosecutors are reviewing the National Enquirer’s handling of its story about Jeff Bezos’ extramarital affair to determine if the company violated an earlier cooperation deal with prosecutors,” Bloomberg reports.

“Prosecutors in the Manhattan U.S. attorney’s office were provided with information about key exchanges concerning Bezos, the founder of Amazon.com Inc., who went public in a jaw-dropping public blog postThursday night.” According to CNBC, the cooperation agreement required the company to agree to “commit no crimes whatsoever.”

A reporter at the Washington Post says that an investigator hired by Amazon CEO Jeff Bezos believes that text messages leaked to the National Enquirer between Bezos and his girlfriend may have been sent to the magazine by someone in government, The Hill reports.

Said Manuel Roig-Franzia: “They have begun to believe, the Bezos camp, that this publication by the National Enquirer might have been politically motivated. Gavin de Becker told us that he does not believe that Jeff Bezos’s phone was hacked, he thinks it’s possible that a government entity might have gotten hold of his text messages.”

Journalist Ronan Farrow claimed that while reporting on stories about the National Enquirer’s arrangement with Donald Trump, he and another journalist fielded “blackmail efforts” from the publication to “stop digging or we’ll ruin you.”

“A spokesman confirmed that the nonprofit 58th Presidential Inaugural Committee paid the Trump International Hotel a rate of $175,000 per day for event space — in spite of internal objections at the time that the rate was far too high. If the committee is deemed by auditors or prosecutors to have paid an above-market rate, that could violate tax laws prohibiting self-dealing.”

“Tax law prohibits nonprofits from paying inflated prices to entities that are owned by people who also control or influence the nonprofit’s activities.”

VIRGINIA. “A Virginia Military Institute yearbook overseen by future state Senate Majority Leader Tommy Norment (R) in 1968 features a host of racist photos and slurs, including blackface,” the Virginian Pilot reports. “The revelation about one of Virginia’s most powerful Republicans comes as the state’s Democratic governor and attorney general are facing calls to resign over their own admissions they wore blackface as young men.”

A second woman has come forward accusing Virginia Lt. Gov. Justin Fairfax (D) of sexual assault, WTKR reports.“Lawyers for Meredith Watson released a statement Friday saying that she was raped by Fairfax while they were both Duke University students in 2000, and called for Fairfax’s resignation.”

Virginia Gov. Ralph Northam (D) “is now tightly focused on coming up with plans to survive,” BuzzFeed News reports. “His office has begun to explore how it might recalibrate Northam’s legislative agenda to focus closely on race and equity… The move would mark a brazen attempt to hang onto his office by shifting the conversation away from Northam’s admission… Northam’s policy team is looking at crafting a set of proposals based on the premise that the governor’s mistakes have rendered him keenly aware of inequity and the lack of justice faced by black Virginians 400 years after the first African people arrived in the Commonwealth, at Point Comfort, in 1619.”

The AP reports Northam “has told his top staff that he does not plan to resign.”

The Washington Post “spoke with 16 men and women from Costa Rica and other Latin American countries, who said they were employed at the Trump National Golf Club Bedminster. All of them said they worked for Trump without legal status — and that their managers knew.”

“The former employees who still live in New Jersey provided pay slips documenting their work at the Bedminster club. They identified friends and relatives in Costa Rica who also were employed at the course. In Costa Rica, The Post located former workers in two regions who provided detailed accounts of their time at the Bedminster property and shared memorabilia they had kept, such as Trump-branded golf tees, as well as photos of themselves at the club.”

ROBERTS IS THE NEW KENNEDY. “The Supreme Court on Thursday blocked a Louisiana law that its opponents say could have left the state with only one doctor in a single clinic authorized to provide abortions,” the New York Times reports. “The vote was 5 to 4, with Chief Justice John Roberts joining the court’s four-member liberal wing.”

MANAFORT CONTINUED WORKING FOR THE OLIGARCHS. “Prosecutors allege that Paul Manafort was working on Ukrainian political matters in 2018, after his indictment in the special counsel’s investigation, and also revealed that a former business associate of his who was assessed by the FBI to have ties to Russian intelligence attended President Trump’s inaugural,” the Washington Post reports.

“At the hearing, attorneys discussed whether Manafort may have been motivated to lie in one unspecified instance ‘to at least augment his chances for a pardon,’ the transcript states, suggesting prosecutors’ suspicion that Manafort might be trying to deceive them even now, after his guilty plea in September in Washington, in the hope of winning a reprieve from the president.”

Rep. Alexandria Ocasio-Cortez (D-NY) “exposed some of the biggest flaws and loopholes in campaign finance laws this week,” the HuffPostreports.

“During a hearing, the freshman lawmaker created a game in which she pretended to be ‘a really, really bad guy’ who wants to abuse the system as much as possible. Then, in a series of questions, she exposed the world of payoffs, dark money, PACs and more. She even revealed how it was perfectly legal for a lawmaker to invest in an industry, then write laws to benefit that industry and increase the value of the investment.”

“But the liberal megadonor isn’t stopping there: He will soon turn his attention to rank-and-file members seated on the committees that would be involved in impeachment proceedings, including freshmen.” He would be better served blasting the shit out of Republican Senators in Colorado, Maine, North Carolina, South Carolina, Texas, Pennsylvania and any other blue state that has a red Senator.

A GIANT HAS PASSED. Former Rep. John Dingell Jr. (D-MI), “the longest-serving member of Congress in American history who helped write most of the nation’s major environmental and energy laws, died Thursday,” the Detroit News reports. He was 92.

Politico: “Dingell’s power came from his chairmanship of the Energy and Commerce Committee, the panel he controlled from 1981 until 1995, and then again from 2007 to 2009, when he was knocked off by California Rep. Henry Waxman, whose candidacy was tacitly backed by Nancy Pelosi, a longtime Dingell foe.” “So vast was Dingell’s jurisdiction atop ‘E & C’ that the entire planet came under his purview.”

NO SHUTDOWN SEQUEL. Rep. Chuck Fleischmann (R-TN) said the chances of another government shutdown were “nil, or next to nil,” Politico reports. Said Fleischmann: “In this situation there is no appetite on either side of the aisle and I think in either chamber for another partial government shutdown.” I hope Fleischmann and all Republicans in Congress realize that they can avoid a shutdown but overturning the President’s veto, should he actually veto a CR or Budget without a wall.

“Faced with limited options and a looming deadline to prevent another government shutdown, President Trump is showing new flexibility on a border-security deal that would fall well short of his once-firm demand for $5.7 billion in funds for a wall at the southwestern frontier,” the New York Times reports.

“On Capitol Hill, House and Senate conferees were nearing an agreement that could offer the president around $2 billion in funding for physical barriers, a number, still subject to change, that could result in a deal as early as Monday.”

Former Deputy FBI Director Andrew McCabe “writes in a new book that Rosenstein, who has publicly defended the memo, lamented that the president had directed him to rationalize Comey’s dismissal, which is now the subject of inquiries into whether Trump obstructed justice.”

“According to people familiar with the recordings, some of the taped conversations dealt directly with the inauguration. In them, Wolkoff detailed her own contemporaneous concerns with the inauguration—about how money was being spent, the general chaos of the process, and the involvement of Trump’s adult children. During these conversations, Wolkoff also raised her issues with the two men in charge of the committee: Rick Gates and Tom Barrack. These recordings, in part, led the Southern District of New York to launch a criminal investigation into how the inaugural committee spent its record $107 million.”

THE IMPORTANCE OF THE MIDWEST. First Read: “People often forget this about Barack Obama’s 2008 campaign: One of his strengths – in both the primaries and general election – was geography.”

“And part of the potential that Klobuchar brings to the 2020 Democratic field is the ability to replicate this Obama strength from 2008. Minnesota, after all, borders Iowa (whose caucuses could be more important than ever this cycle), as well as Wisconsin (which could be 2020’s all-important battleground state in the general election).”

BIDEN WITHOUT THE BAGGAGE. Former Vice President Joe Biden and Sen. Sherrod Brown “are on an early collision course in the initial days of the 2020 presidential race,” Politico reports. “They’re chasing the same potential supporters, touting the same themes and even using some of the same language to go after President Trump. And Brown, kicking off a pre-campaign tour of key presidential voting states last week, made clear that if he gets into the race he intends to run, essentially, as Biden without the baggage.”

ANOTHER GEORGIA SWING DISTRICT UP FOR GRABS. Rep. Rob Woodall (R-GA), “who narrowly won the closest congressional race in the nation last fall, will not seek reelection next year, all but ensuring his rapidly-diversifying suburban House district will become one of the country’s fiercest political battlegrounds in 2020,” the Atlanta Journal Constitution reports.