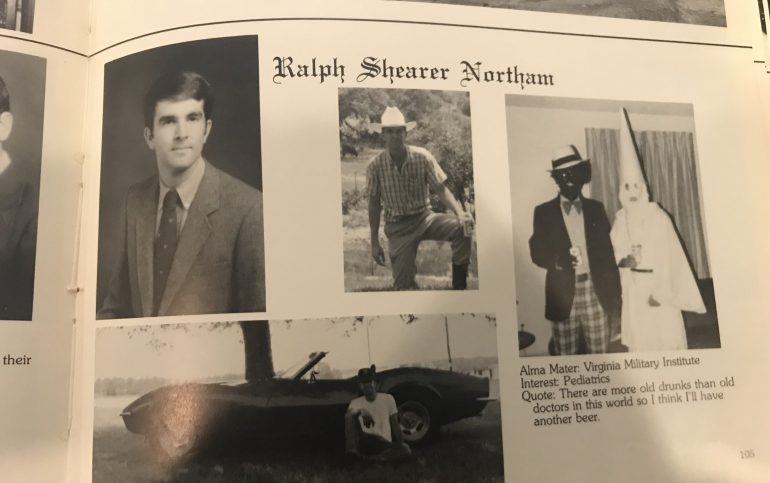 Virginia Gov. Ralph Northam (D) “said he is neither of the people in the racist photo that surfaced Friday from a 1984 yearbook from Eastern Virginia Medical School,” the Richmond Times Dispatch reports.

“Northam said he saw the photo, now more than 30 years old, for the first time Friday. After admitting it was him in the photo and apologizing Friday night, Northam said after reflection with his family and talking to former classmates, he now says it was not him in the photo.”

Despite overwhelming pressure from within his own party, Northam won’t resign, according to the Washington Post, but said “if he felt he wasn’t able to function efficiently as governor, he would re-visit the matter.”

New York Times: “But he may have made his effort to remain in office more difficult by revealing that he had darkened his face with shoe polish in the 1980s at a Michael Jackson-inspired dance party in Texas when he was a young Army officer.”

Virginia Governor Ralph Northam refuses to resign, now says he is NOT in racist photo https://t.co/ZgsTId7eOM

Former Virginia Gov. Terry McAuliffe (D) called on his successor Ralph Northam (D) to resign late Friday, The Hill reports.  Said McAuliffe: “This has been a heartbreaking day. Ralph Northam is my friend and he served well as my Lt. Governor and as Governor. His actions on display in this photo were racist, unacceptable and inexcusable at any age and any time.”  He added: “The situation that he has put himself and the Commonwealth of Virginia in is untenable. It’s time for Ralph to step down, and for the Commonwealth to move forward.”

The Richmond Times Dispatch called for Virginia Gov. Ralph Northam (D) to resign after the revelation of a photo from his medical school yearbook page, showing a man in blackface standing next to someone dressed in Ku Klux Klan robes.

The Democratic Governor’s Association called for Virginia Gov. Ralph Northam to resign over a racist yearbook photo minutes before he was gave a press conference refusing to step down over the controversy.

“The photo of Ralph Northam’s yearbook that surfaced yesterday is both racist and inexcusable,” Gov. Gina Raimondo (D-RI) and DGA Chair Elect Gov. Phil Murphy (D-NJ) said in a statement. “It is time for Gov. Northam to step aside and allow Virginia to move forward.”

Politico: “It was no easy feat. But on Saturday, Ralph Northam staked a claim in the annals of most surreal political press conferences, presiding over a 40-minute extravaganza that would do Mark Sanford and Jim McGreevey proud. Or something like that.”

“In a bid to salvage his job, the Democratic governor of Virginia denied he was one of the men dressed up as a Klansman and in blackface in a picture on his medical school yearbook page — after admitting the night before he was, in fact, in the photo.”

“But that was just the start.“

Aaron Blake: “Northam may not know it yet, but in all likelihood he is done.”

“Senate Majority Leader Mitch McConnell cautioned President Trump privately this week about the consequences of declaring a national emergency to build his border wall, telling him the move could trigger political blowback and divide the GOP,” the Washington Post reports.

“McConnell told Trump that Congress might end up passing a resolution disapproving the emergency declaration, the people said — which would force the president to contemplate issuing his first veto ever, in the face of opposition from his own party.”

If Senators actually intend to push for reforms, they need to offer realistic plans for doing so.https://t.co/iAey2E2FwM

A new Change Research (D) survey finds former Starbucks CEO Howard Schultz is less known to the electorate than other declared and potential presidential candidates  with 56% having never heard of him or don’t have an opinion. Among those who have an opinion, just 4% view him favorably compared to 40% unfavorably — a 10:1 unfavorable to favorable ratio, far higher than any other candidate tested.

In hypothetical matchups, with and without Schultz in the race, of Donald Trump running against different Democrats — Joe Biden, Kamala Harris, Elizabeth Warren, Beto O’Rourke, and Bernie Sanders — Schultz takes an average of four points away from what the Democratic candidate receives in a two-way race, while taking just 1% away from Trump.

“The Russian propaganda machine that tried to influence the 2016 U.S. election is now promoting the presidential aspirations of a controversial Hawaii Democrat who earlier this month declared her intention to run for president in 2020,” NBC News reports.

“An NBC News analysis of the main English-language news sites employed by Russia in its 2016 election meddling shows Rep. Tulsi Gabbard of Hawaii, who is set to make her formal announcement Saturday, has become a favorite of the sites Moscow used when it interfered in 2016.”

The Democratic Party should expel her immediately.

The NY Times' publisher challenged Trump for attacking the press. Trump pretended to care. Nothing will change.https://t.co/zELn8tfnr1

“Small as it is, this pledge to reject corporate PAC money has become a cornerstone of the Democrats’ primary contest. It helped Harris to raise $1.5 million online from small donors in the 24 hours after she announced. Warren’s campaign didn’t release a total for the post-announcement surge, but she said she got contributions from all 50 states, the District of Columbia and Puerto Rico.”

“Michael Bloomberg and former Virginia Gov. Terry McAuliffe, each of whom were virtual locks to run, are having serious second thoughts after watching Democrats embrace ‘Medicare for All,’ big tax increases and the Green New Deal. Joe Biden, who still wants to run, is being advised to delay any plans to see how this lurch to the left plays out. If Biden runs, look for Bloomberg and McAuliffe to bow out, the sources tell us.”

The real reason Republicans are freaked out by the Democrats' move to the left: https://t.co/nA1KFN561i

New York Times about a heretofore undisclosed 2016 Trump application to Deutsche Bank for a loan: “Mr. Trump’s loan request, which has not been previously reported, set off a fight that reached the top of the German bank, according to three people familiar with the request. In the end, Deutsche Bank did something unexpected. It said no.”

“Senior officials at the bank, including its future chief executive, believed that Mr. Trump’s divisive candidacy made such a loan too risky, the people said. Among their concerns was that if Mr. Trump won the election and then defaulted, Deutsche Bank would have to choose between not collecting on the debt or seizing the assets of the president of the United States.”

“Two sources with direct knowledge of his plans told Yahoo News that Sanders, an independent and self-described ‘democratic socialist,’ plans to announce his presidential bid imminently. While Sanders has been considering a bid for months, one of the sources said he was emboldened by early polls of the race that have consistently showed him as one of the top candidates in a crowded Democratic primary field.”

“In particular, the source said Sanders was heartened to see numbers indicating he is one of the leading candidates among African American and Latino voters, two groups he was perceived as struggling with in 2016.”

“The source also alluded to a spate of recent polls that show Sanders as the most popular politician in the country. They attributed Sanders’ strength in the polls to the base and name recognition he built with the prior presidential bid.”

Tough but fair assessment of @CoryBooker's launch and his strengths and weaknesses as a candidate, from @paulwaldman1:https://t.co/LMu3OJzuOw

Playbook: “Our sources tell us Milwaukee is the odds-on favorite for the 2020 Democratic National Convention. (John Bresnahan’s sources tell him this too.) Houston and Miami are also still in the hunt, and all three cities have been asked to move forward with a master contract. Officials are pushing ahead to secure convention hotel rates, and representatives from all three cities were in D.C. last week delivering their final pitches.”

“Democrats need to win Wisconsin in 2020. The city has a new arena that has a lot of open space around it that could add some flexibility for planning and events.”

David Axelrod tells the New Yorker that it will be very hard for President Trump to win re-election.

Said Axelrod: “He drew an inside straight in the last election and squeaked through in the upper Midwest, which showed real resistance to him in the midterm elections. If he were to lose Wisconsin, Michigan, and Pennsylvania, all of which had strong Democratic showings in 2018, he would lose the Presidency, and there’s not one state I can think of that Trump could add.”

He added: “That said, he should not be underestimated. He has a kind of feral genius for manipulating the media environment. We know there’s nothing that he wouldn’t do to win, so he will be working day and night to destroy whoever the nominee is, and he’s got a great talent for that. Trump did speak to a fundamental sense of jaundice out there about Washington politics as usual. And, to the degree that the nominee can be depicted as a representation of that, his chances improve. All that said, if you were betting today, you would not bet on Donald Trump.”

“In the wake of President Trump’s renewed attacks on the U.S. intelligence community this week, senior intelligence briefers are breaking two years of silence to warn that the President is endangering American security with what they say is a stubborn disregard for their assessments,” Time reports.

“Citing multiple in-person episodes, these intelligence officials say Trump displays what one called ‘willful ignorance’ when presented with analyses generated by America’s $81 billion-a-year intelligence services. The officials, who include analysts who prepare Trump’s briefs and the briefers themselves, describe futile attempts to keep his attention by using visual aids, confining some briefing points to two or three sentences, and repeating his name and title as frequently as possible.”

“What is most troubling, say these officials and others in government and on Capitol Hill who have been briefed on the episodes, are Trump’s angry reactions when he is given information that contradicts positions he has taken or beliefs he holds. Two intelligence officers even reported that they have been warned to avoid giving the President intelligence assessments that contradict stances he has taken in public.”

“Russian President Vladimir Putin, in a decision that was widely expected, suspended his country’s observance of a key nuclear arms control pact on Saturday in response to a similar move by the United States a day before,” the New York Times reports.

“But adding to a sense that the broader architecture of nuclear disarmament has started to unravel, Mr. Putin also said that Russia would build weapons previously banned under the treaty and would no longer initiate talks with the United States on any matters related to nuclear arms control.”

"So it’s very ironic and makes zero sense that now somehow a Latino would be told, 'You’re not good enough because you don’t speak Spanish.'" https://t.co/MJGZjlGotF

Sen. Elizabeth Warren (D-MA) “is preparing a robust, official launch to her presidential campaign in her home state of Massachusetts next week, followed by a six-state, cross country tour that will take her to four early presidential states, key southern states and to delegate-rich California, where an early primary is becoming an increasingly critical calculation to 2020 Democratic aspirants,” Politico reports.

“Warren’s live launch announcement will take place in Lawrence, Massachusetts from the steps of Everett Mills, the site of the 1912 ‘Bread and Roses Strike’ where thousands of women walked off their factory jobs protesting working conditions and low wages.”