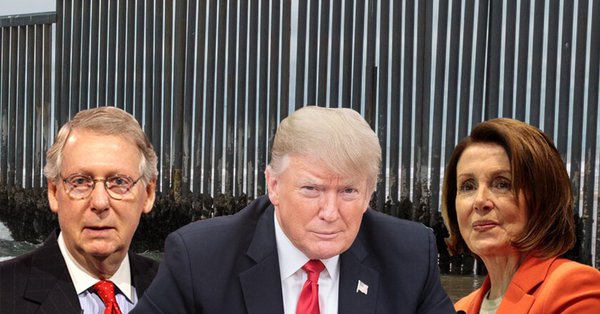 President Trump said he “might declare a national emergency to obtain funding to build a wall along the U.S. border with Mexico because it did not appear Democrats were moving toward a deal that would provide the money,” Reuters reports.

Said Trump: “We’re not getting anywhere with them… I think there’s a good chance that we’ll have to do that.”

Ann Coulter told Yahoo News that President Trump is “lazy and incompetent” and warned that he might face a challenger for the Republican presidential nomination if he doesn’t build a wall on the Mexican border.  Said Coulter: “We put this lunatic in the White House for one reason.”

“The California Democrat, under a seldom-used statute, could put a binding ‘resolution of disapproval’ on the House floor to counter Trump should he claim constitutional powers to unilaterally build a border wall.”

Key takeaway: “The resolution would almost assuredly pass the Democratic House. Then, in a quirk of the law — the Congressional Review Act — Senate Majority Leader Mitch McConnell (R-KY) would essentially be forced to hold a floor vote, with only a simple majority required for passage rather than the customary 60 votes.”

Trump and the publisher of the NYT had an extraordinary exchange about Trump's attacks on the free press.

The results were startling, particularly when Trump was told that his attacks are inspiring "dictators and tyrants."

A defiant President Trump told the New York Times that he “has all but given up on negotiations with Congress over his border wall and will proceed without lawmakers even as he dismissed any suggestions of wrongdoing in the investigations that have ensnared his associates.”

“Addressing a wide range of subjects, Mr. Trump brushed off the investigations that have consumed so much of his presidency, saying that his lawyers have been reassured by the outgoing deputy attorney general, Rod Rosenstein, that the president himself was not a target. Mr. Trump said he never spoke with Roger Stone, his longtime associate who was indicted last week, about WikiLeaks and the stolen Democratic emails it posted during the 2016 election, nor did he direct anyone to do so.”

I’m running for president. Join me on this journey. https://t.co/fEDqOVIfwh pic.twitter.com/h1FTPUYRzo

This is a good first ad.

Sen. Cory Booker (D-NJ), who rose to prominence as Newark’s charismatic and ambitious mayor, announced Friday that he is running for president, CNN reports.

“Booker chose the first day of Black History Month to launch his campaign, timing that nods to Booker’s own heritage and suggests he will put it at the center of his pitch to voters.”

Washington Post: “His decision did not come as a surprise. Booker has been traveling to early-voting states for months, teasing his eventual entrance.”

Susan Glasser: “It’s hardly surprising that, in the days since his shutdown humiliation, Trump has retreated into the virtual seclusion of Twitter, holed up watching cable news and tweeting his alternative reality as America struggles with an actual deep freeze. For Trump, the fake world is much better than the real one. There is no extreme weather in his White House; in fact, climate change does not exist inside its walls. Trump’s policy has decreed it.”

“He’s avoiding more than just the frigid air outside; in the cocoon of the Oval Office, there are only invited guests and staff who, while they may be secretly leaking unflattering accounts, at least have the good sense to be nice to Trump’s face. In recent days, the Democratic Speaker of the House, Nancy Pelosi, has compared Trump to a petulant toddler and openly wondered what Russia has on him. Why would Trump want to spend his time negotiating with her?”

“Much better, from Trump’s point of view, to simply announce, as he did to reporters on Thursday, that ‘Nancy Pelosi will be begging for a wall,’ and spend the day with his own press secretary, Sarah Huckabee Sanders, who this week told an interviewer that God ‘wanted Donald Trump to become President.’”

Simply put, this is a big deal: https://t.co/qfXGHU8WQ6

“The United States is suspending one of the last major nuclear arms control treaties with Russia after heated conversations between the two powers recently failed to resolve a long-running accusation that Moscow is violating the Reagan-era treaty,” the New York Times reports.

“Secretary of State Mike Pompeo announced the decision on Friday as the Trump administration maintained that the Russian government has been unwilling to admit that a missile it has deployed near European borders violates the terms of the 1987 Intermediate-Range Nuclear Forces Treaty. Mr. Pompeo and his deputies have insisted that Moscow destroy the missile.”

Sen. Elizabeth Warren (D-MA) “has apologized to the Cherokee Nation for her decision to take a DNA test to prove her Native American ancestry, a move that had angered some tribal leaders and ignited a significant political backlash,” the New York Times reports.

“The apology comes as Ms. Warren is set to formally kick off her presidential run this month after recent visits to early nominating states like Iowa, New Hampshire, and South Carolina. It also comes after repeated calls for her to apologize from tribal leaders, political operatives, and her own advisers, who said her October decision to take the DNA test gave undue credence to the controversial claim that race could be determined by blood — and politically, played into President Trump’s hands.”

Howard Schultz is annoying, but his presidential bid is an opportunity for Democrats to finally bury Clintonism https://t.co/1rrMAsqqWV

“The intense nature of the criticism stunned Schultz,” Fox Businessreports.

“While he expected some carping, he did not foresee the ferocity of some of the vitriol, particularly from the party’s top officials and operatives… What people who have spoken with Schultz agree on is that he is now readjusting his message about the likelihood of an independent presidential campaign.”

A senior adviser says “Schultz’s decision is far from final—and he won’t make up his mind until at least the summer.”

Australian diplomats have reportedly visited Julian Assange in Ecuador’s embassy in London to hear firsthand about his health, the Sydney Morning Herald Reports.

Assange’s attorney “said he and his colleagues will now directly appeal to Foreign Minister Marise Payne to petition the UK government to let Assange leave the embassy for urgent medical care without being arrested.”

Trump spikes the football because Donald Jr.'s phone call was not to him.

But look who who Junior did call. https://t.co/08f9RmshIg

Tom Moran on Cory Booker: “He’s a rich target in crazy times like this, because he’s not a normal guy. He’s a vegan and a Rhodes Scholar, and he never touches alcohol or tobacco. He meditates daily, and Tweets quotes from Jewish scholars and Buddhist priests. He once supported vouchers for private schools, and he attends prayer meetings with a Republican senator who thinks climate change is a hoax. I like all that, myself. We’ll see how it goes over with factory workers in Toledo.”

“But put that aside. The core criticism of Booker is that he is a showboat with a silver tongue, a man whose real talent is promoting himself, not getting stuff done.”

“That last part — about not getting stuff done — is wildly unfair. He may be famous for that silver tongue, but he carries an iron hammer to work… Showboat? The man likes a camera, granted. But there’s a lot more to him than that.”

The Labor Department said that 304,000 jobs were added last month, as compared to an estimate by economists of about 172,000, the New York Times reports.  The unemployment rate rose to 4.0 percent.

“January’s growth means that American employers have added jobs for 100 consecutive months, extending a record run. The unemployment rate is near a multidecade low, and wages — long a weak point — are rising.”

“President Trump’s campaign and affiliated committees raised more than $21 million in the final three months of 2018, entering the presidential election cycle with a massive head start just as a wide-open Democratic field begins to take shape,” the Washington Post reports.

“The latest fundraising disclosures bring the total haul for Trump’s reelection effort to more than $129 million, a record amount for a sitting president at this point in the election cycle. The campaign had more than $19.2 million in cash on hand by the end of 2018, according to new Federal Election Commission filings made public Thursday night.”

How Cory Booker could win the 2020 Democratic primary —> https://t.co/61zt6HwXbO

“President Trump is telling conservative allies he wants to incorporate firm anti-abortion language into his State of the Union address next Tuesday, and potentially include an anti-abortion figure among his list of invitees,” Politico reports.

“Trump sees an opening to energize his evangelical supporters and capture moderate voters who administration officials believe may be turned off by widespread coverage of New York’s newest abortion law, which allows for termination of some pregnancies after the 24-week mark for health reasons.”

“An undocumented worker who was fired from the Trump National Golf Club in Bedminster, N.J., after she publicly disclosed her immigration status will attend President Trump’s State of the Union address next week,” the Washington Post reports.

“Victorina Morales, who was born in Guatemala, will be a guest of Rep. Bonnie Watson Coleman (D-NJ) when the president speaks to a joint session of Congress Tuesday night.”

Be wary of all prognostications for the 2020 election. New dynamics are emerging in American politics.https://t.co/Xztchz1MsN

A new study found that the steady loss of local newspapers and journalists across the country contributes to the nation’s political polarization, the AP reports.

“With fewer opportunities to find out about local politicians, citizens are more likely to turn to national sources like cable news and apply their feelings about national politics to people running for the town council or state legislature.”

“The result is much less ‘split ticket’ voting, or people whose ballot includes votes for people of different parties. In 1992, 37 percent of states with Senate races elected a senator from a different party than the presidential candidate the state supported. In 2016, for the first time in a century, no state did that, the study found.”

Said professor Johanna Dunaway: “The voting behavior was more polarized, less likely to include split ticket voting, if a newspaper had died in the community.”

Pew Research: “While demographic changes unfold slowly, it’s already clear that the 2020 electorate will be unique in several ways. Nonwhites will account for a third of eligible voters – their largest share ever – driven by long-term increases among certain groups, especially Hispanics.”

“At the same time, one-in-ten eligible voters will be members of Generation Z,  the Americans who will be between the ages 18 and 23 next year. That will occur as Millennials and all other older generations account for a smaller share of eligible voters than they did in 2016.”

“Democrats now in the majority on the Intelligence Committee had vowed that one of their first acts would be to authorize the release of more than 50 witness interview transcripts to Mueller to aid in his probe. At the least, members have said they had reason to believe some witnesses lied to the panel, something that has already led Mueller to bring charges against Trump allies.”

Politico: “The lack of action on picking the full slate of panel members had led some observers to question if Republicans were attempting to hamstring the committee.”