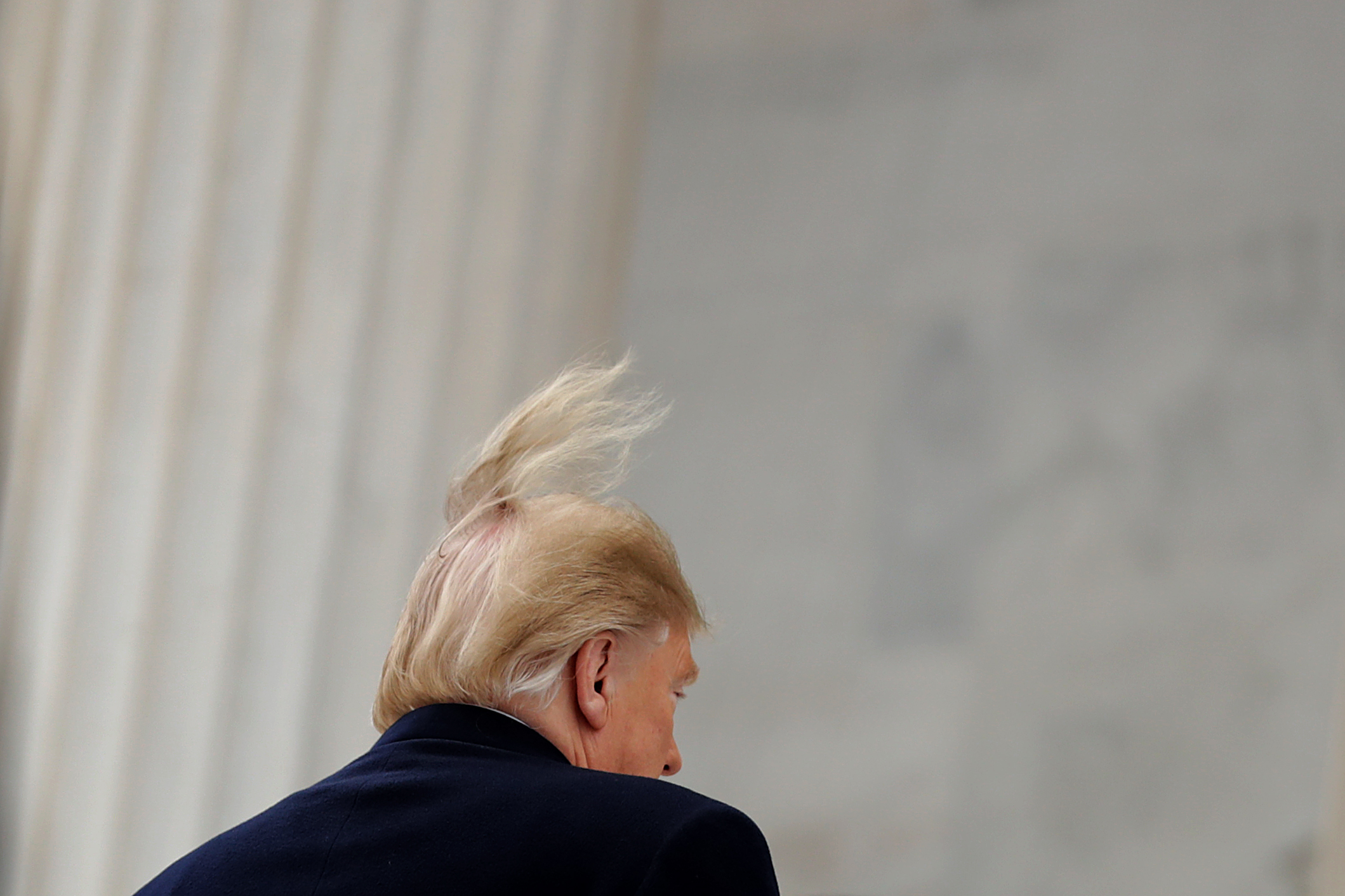 “Nancy Pelosi’s first showdown with President Trump began with him publicly questioning her political viability. It ended with the House speaker winning an unmitigated victory and reviving her reputation as a legislative savant,” the Washington Post reports.

“Trump’s capitulation — agreeing to reopen the federal government after a 35-day standoff without funding for a U.S.-Mexico border wall — generated rave reviews for Pelosi from fellow Democrats and grudging respect from Republicans who watched as she kept an unruly party caucus united in the face of GOP divide-and-conquer tactics.”

“Pelosi emerges from the shutdown as a stronger leader of her party — and more popular with the public, by early measures — as Democrats eye aggressive efforts to counter Trump’s agenda through ambitious legislation and tough oversight. That suggests the shutdown might have been a strategic misstep for Trump, in addition to a tactical error.”

According to a new Washington Post-ABC News poll, six in 10 Americans say the new Democratic majority in the House should make use of its authority to obtain and publicly release Donald Trump’s tax returns, while about as many support other Democratic-led investigations of the president.

“57 to 61 percent back House investigations into three topics tested in the national survey: possible collusion between Trump’s 2016 presidential campaign and Russia, Trump’s relationship and communications with Russian President Vladimir Putin and possible financial ties between Trump and foreign governments.”

Peter Zeidenberg: “This is as close to a slam-dunk case as a prosecutor will ever bring… Do not expect to see special counsel Robert Mueller make any attempt to flip Stone and have him cooperate. A defendant like Stone is far more trouble than he is worth to a prosecutor. Stone is too untrustworthy for a prosecutor to ever rely upon.”

“Mueller does not need Stone to get to someone else and, even if he did, he could not rely on whatever Stone told him. Stone has nothing to sell that Mueller would be interested in buying.”

“Stone is clearly enjoying being in the spotlight now. He should enjoy it while he can. His remaining years won’t be nearly as pleasant.”

“They lied to the public for months before Donald Trump was elected — and then repeatedly after he took office. They lied to Congress as lawmakers sought to investigate Russia’s attack on American democracy in 2016. And they lied to the FBI, even when they knew lying was a crime,” the Washington Post reports.

“In indictments and plea agreements unveiled over the last 20 months, special counsel Robert Mueller has shown over and over again that some of President Trump’s closest friends and advisers have lied about Russia and related issues.”

“The remaining question — for both Mueller’s team, as it works on a final investigative report, and for the American people — is why.”

Julian Sanchez: “For many, Friday’s arrest of Roger Stone, the veteran political trickster and longtime adviser to Donald Trump, was a sign that the special counsel investigation into Russian electoral interference is entering its final phase. Yet there were also several indications that the probe may not be as near its conclusion as many observers assume — and that the true target of Friday’s F.B.I. actions was not Mr. Stone himself, but his electronic devices.”

Newly-indicted Trump confidant Roger Stone indicated Sunday that he hadn’t shut the door on the idea of cooperating with special counsel Robert Mueller.

In an interview with ABC’s George Stephanopoulos, Stone maintained his innocence (aside from some professed “inconsequential” errors in prior congressional testimony, which the special counsel’s office has alleged were criminal lies), but expressed an openness to cooperating with Mueller.

“You know, that’s a question I have to determine after my attorneys have some discussion,” Stone replied. “If there’s wrongdoing by other people in the campaign that I know about, which I know of none, but if there is I would certainly testify honestly.”

A new NBC News/WSJ poll says six-in-10 Americans believe the country is headed in the wrong direction, and nearly 70 percent of them have negative opinions on the state of the nation today. s–

Charles Pierce on how Republicans ran an experiment, and got results they didn’t want. “The White House got rolled on Friday by Nancy Pelosi, to be sure. But it also got rolled by TSA agents, and air-traffic controllers, government employees standing at food co-ops and pantries, as well as thousands of inconvenienced ordinary Americans standing in line at airports. This is more important than the fact that the president got beaten again by the new-slash-old Speaker of the House.

I’m stressing the whole air-traffic business because that’s where the long slide toward Trumpism began. When Ronald Reagan broke the controllers’ union, he signaled that the federal government was a) open for business, and b) on the side of management, and therefore on the side of capital and not labor, and the Republican Party committed itself to that equation as a matter of faith. Simultaneously, it adopted supply-side economics as its only real policy in that area. And that’s where it’s been since 1981. Until, I suspect, maybe, now.”

Catherine Rampell says the GOP has become the Soviet party. “Once upon a time, Ayn Rand-reading, red-baiting Republicans denounced Soviet Russia as an evil superpower intent on destroying the American way of life. My, how things have changed.

The Grand Old Party has quietly become the pro-Russia party — and not only because the party’s standard-bearer seems peculiarly enamored of Russian President Vladimir Putin. Under Republican leadership, the United States is starting to look an awful lot like the failed Soviet system the party once stood unified against.

Supposedly middle-class workers — people who have government jobs that are supposed to be stable and secure — are waiting in bread lines. Thanks to government dysfunction and mismanagement, those employed in the private sector may also be going hungry, since 2,500 vendors nationwide are unable to participate in the food stamp program while the government is shuttered and unable to renew licenses for the Electronic Benefit Transfer debit card program.

Why? Because of the whims of a would-be autocrat who cares more about erecting an expensive monument to his own campaign rhetoric than about the pain and suffering of the little people he claims to champion. … The would-be autocrat surrounds himself with toadies who spend more time scheming against one another — sometimes to comic effect — than trying to offer their boss sound guidance or thoughtful policy solutions. In his presence, and perhaps especially when the cameras are on, they praise him relentlessly: his brains, his leadership, his “perfect genes.”

Michael Tomasky on Trump and his master negotiating skillz: “What a joke. What a fraud. As Bugs Bunny used to say, what a maroon. Art of the deal? Deal?!

Donald Trump is in this so far above his head he’s like Danny DeVito in the Lakers’ locker room. To extend the metaphor, Nancy Pelosi is LeBron, and Chuck Schumer is, uh, whoever their second-best player is these days. But the two of them, Pelosi in particular, have just made the president of the United States look like 1) a fool and 2) a moral eunuch, which you might say shouldn’t be hard, because he is obviously both of those things, but he is the president and he has the bully pulpit and all that, along with a propaganda network that every night tells millions of Americans that he farts roses, so actually it is kind of hard, what they did. There’s a lot riding on a government shutdown. I hope he learned that. I hope Wilbur Ross and Kevin Hassett and Lara Trump learned.

But what am I thinking? These people don’t learn. Wait, maybe that’s slightly wrong. Ann Coulter is mad, apparently. So what Trump et al. will probably learn is exactly the opposite of what a reasonable human being would learn. Sure enough, at the end of his Learseque Rose Garden soliloquy, he basically threatened another shutdown. Either that or he’ll invoke emergency powers to address the emergency that no expert thinks exists. That will be fun.”

Dana Milbank on the resurgent labor movement. “Something funny happened on the way to the labor movement’s funeral. When Justice Samuel A. Alito Jr. and his antilabor colleagues on the Supreme Court handed down the Janus v. AFSCME decision last June, unions braced for the worst. The American Federation of Teachers expected it might lose 30 percent of its revenue after the high court gave public-sector workers the right to be free riders, benefiting from union representation but paying nothing.

Instead, the 1.7 million-member union added 88,500 members since Janus — more than offsetting the 84,000 “agency-fee payers” it lost because of the Supreme Court ruling. And the union has had a burst of energy. There has been a surge of high-profile strikes by teachers’ unions in West Virginia, Oklahoma, Arizona, Los Angeles and elsewhere. Rallies, pickets and local campaigns mushroomed by the hundreds. The union has tallied 11 organizing wins since Janus, tripled its “member engagement” budget from 2014 and nearly doubled the number of voters it contacted in 2018.”