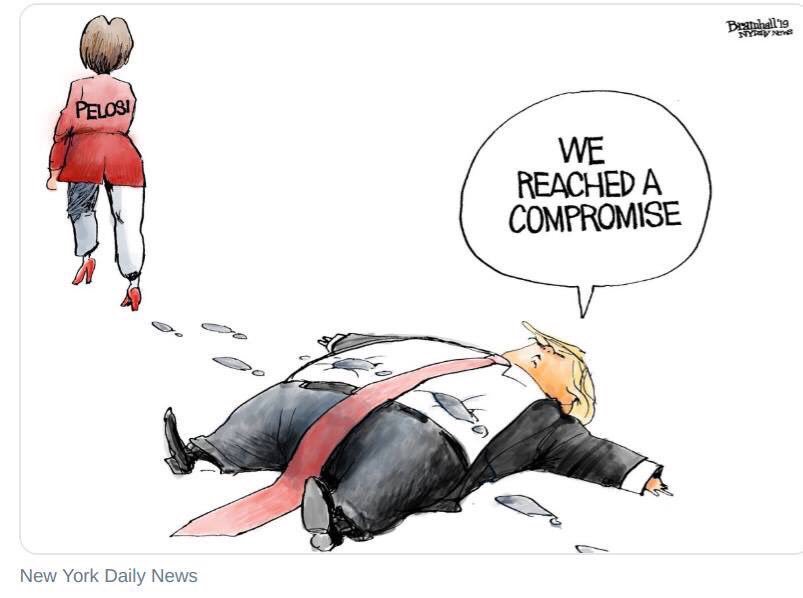 A former White House official tells Politico that President Trump’s core supporters and former aides are “furious” and “melting down.”

“Bewildered by his decision to accept a deal without funding for a wall on the southern border — not even the ‘down payment’ the White House had requested a day earlier — some of his most loyal supporters fretted that Trump was in danger of losing his fervent base that has fueled his presidency.” Said another former White House aide: “He allowed 35 days of chaos and hurt all for nothing.”

Meanwhile, the Washington Post reports Fox Business host Lou Dobbs, who described himself as an “an animated, energetic supporter of this president,” conceded that House Speaker Nancy Pelosi (D-CA) “has just whipped the president of the United States.”

Playbook: “Everyone we speak to in the administration and on Capitol Hill says that since Mick Mulvaney took over as chief of staff, the process in the White House has gone to hell. The shutdown became a Jared Kushner show, and the people whose job it is to deal with policy and politics were sidelined. Of course, Kushner is the president’s son in law, and his camp believes he was empowered to do this by the president.”

CNN: “Friday’s announcement was an extraordinary comedown that left many in the White House and those who support Trump marveling at the futility of the preceding four weeks of brinkmanship. In the eyes of some aides and outside advisers, an entire fruitless month has passed that cannot be recouped, a waste of the most valuable asset a White House has: the President’s attention and time.”

Washington Post: “The sudden firings — which were previously unreported — follow last year’s revelations of undocumented labor at a Trump club in New Jersey, where employees were subsequently dismissed. The firings show Trump’s business was relying on undocumented workers even as the president demanded a border wall to keep out such immigrants.”

“President Trump’s defeat in his border-wall standoff with Congress has clouded his already perilous path to a second term in 2020, undercutting Mr. Trump’s cherished image as a forceful leader and deft negotiator, and emboldening alike his Democratic challengers and Republican dissenters who hope to block his re-election,” the New York Times reports.

“The longest government shutdown in history inflicted severe political damage on the president, dragging down his poll numbers even among Republicans and stirring concern among party leaders about his ability to navigate the next two years of divided government. Mr. Trump, close associates acknowledge, appears without a plan for mounting a strong campaign in 2020, or for persuading the majority of Americans who view him negatively to give him another chance.”

Howard Schultz, the former Starbucks CEO, will say in a 60 Minutes interview already recorded, but airing on Sunday that he is thinking very seriously about an independent presidential run — but stop short of a full announcement, The Atlantic reports.

“Already, top Democratic operatives working for presidential candidates and beyond say they’re worried that the only thing he’ll accomplish is making sure Donald Trump gets re-elected. It’s more than just sniping at a prospective opponent—word that he might invest in an independent run has many of them clearly worried about how he’d split votes in a general election.”

“During the 2016 presidential campaign and transition, Donald Trump and at least 17 campaign officials and advisers had contacts with Russian nationals and WikiLeaks, or their intermediaries, a New York Times analysis has found. At least 10 other associates were told about interactions but did not have any themselves.”

“Among these contacts are more than 100 in-person meetings, phone calls, text messages, emails and private messages on Twitter. Mr. Trump and his campaign repeatedly denied having such contacts with Russians during the 2016 election.”

According to a Washington Post report, Trump had been operating under the belief that House Speaker Nancy Pelosi (D-CA) would be unable to keep her caucus in line as the shutdown progressed.

“Why are they always so loyal?” he reportedly complained in a staff meeting.

The United States economy lost at least $6 billion due to the lost work from furloughed workers and depressed economic activity from outside business,according to a Friday Reuters report.

“President Trump met last week with a delegation of hard-right activists led by Ginni Thomas, the wife of Justice Clarence Thomas, listening quietly as members of the group denounced transgender people and women serving in the military before accusing White House aides of blocking Trump supporters from getting jobs in the administration,” the New York Times reports.

“It is unusual for the wife of a sitting Supreme Court justice to have such a meeting with the president, and some close to Mr. Trump said it was inappropriate for Ms. Thomas to have asked for a meeting with the head of a different branch of government.”

“In doing so, Republicans from across the state on Saturday chose a more right-wing vision headed into the 2020 election cycle where Arizona is poised to reach battleground status.”

Looks like Arizona Republicans are reacting to the lose of a Senate seat to the Democrats in 2018 the same Virginia Republicans did to Obama winning the state in 2008: by going to the extreme far right and guaranteeing the state being a safe blue state for the next four generations.

The identity of whoever was allegedly directing Bannon and Stone to seek other damaging information about Clinton isn’t disclosed in the indictment. It was likely someone in the very upper reaches of the campaign – possibly a member of the Trump family or Trump himself. Regardless, the indictment’s 24 pages offer one of law enforcement’s most thorough descriptions to date of how intimately Trump’s closest advisors worked with WikiLeaks and Russian-sponsored hackers during the 2016 campaign. The indictment also draws a very full portrait – via testimony, public statements, email and other evidence – of just how readily and actively the Trump campaign colluded with foreign interests in its bid for the presidency.”

Ryan Cooper says Republican senators need to pull Trump into line. Good luck: “Part of wise political strategy is knowing when to fight and when to cut one’s losses and survive to fight another day. By far the best thing for the country and even the Republican Party would be for Senate Republicans to override Trump, reopen the government with a clean funding bill, and move on (no doubt another crisis is just around the corner).

There is also, you know, the whole “serving as the people’s democratic representative” thing. Ideas like honor and duty have become tarnished beyond recognition in today’s Republican Party, but it’s just possible that the damage this senseless shutdown is inflicting on the country is starting to sink in. For instance, the associations of air traffic controllers, pilots, and flight attendants recently released a joint statement about the shutdown which stated: “[W]e cannot even calculate the level of risk currently at play, nor predict the point at which the entire system will break. It is unprecedented.” It is entirely imaginable that Trump’s shutdown is going to result in the deaths of large numbers of Americans.”

Simon Rosenberg: “Critical to making sense of today’s Stone news is for all of us to get to a more accurate place about the impact Russia’s intervention had on the 2016 election. Many of the words used – hacking, meddled, interfere – are all far too benign to describe what happened.

On a Friday morning, hours after Trump became the nominee, delivering a speech which was wildly critical of America and its historic mission, Russia dropped a massive trove of emails designed to harm the Democratic Party and its Convention which was beginning in a few days.

But damage from direct Russian attack on an American political party and its leadership was much greater than a chaotic convention. Entire general election plan, operation wildly disrupted. Huge amounts of time devoted to mitigating damage sucked capacity from normal campaign.”