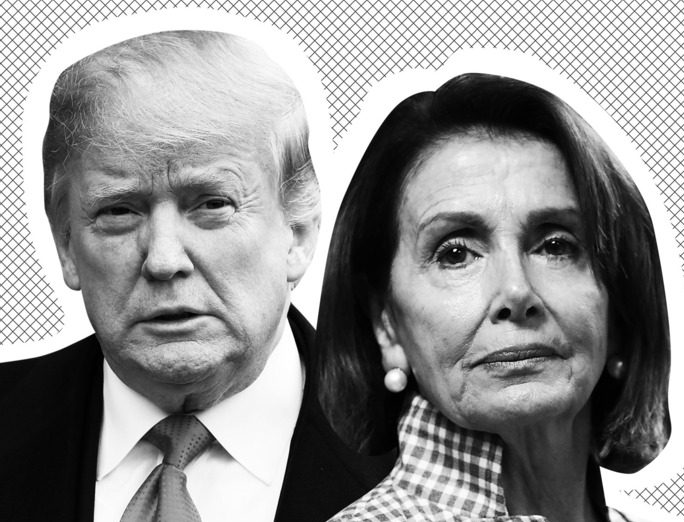 President Trump “announced a deal with congressional leaders to temporarily reopen the government while talks continue on his demand for border wall money, handing Democrats a major victory in the protracted standoff,” the Washington Post reports.

“The pact would reopen shuttered government departments for three weeks while leaving the issue of $5.7 billion for the U.S.-Mexico border wall to further talks.”

“If a ‘fair deal’ does not emerge by Feb. 15, Trump said, there could be another government shutdown or he could declare a national emergency, a move that could allow him to direct the military to build the wall without congressional consent. Such an action would likely face an immediate legal challenge.”

Pelosi is going to have to add Trump to her disclosure forms where it asks for a list of assets she owns.

David A. Graham: ” The announcement is a big win for Democrats, who had demanded that Trump reopen the government before they’d negotiate on border security. Trump did not sound especially optimistic that Democrats would give him the money he’s requested. […] In other words, Trump not only folded—sustaining all the political damage that he would have in December—but he did so only after a long, bruising shutdown that hurt his public approval and split off even some of his core supporters. This dubious strategy is in keeping with the president’s modus operandi. As I have written, Trump almost always folds. From tougher gun control to family separations at the border to negotiations with hostile actors (from Pyongyang to the Democratic caucus), the president talks a tough game and then generally gives in.

Trump’s desire for the wall is genuine. Hoping to make good on his central campaign promise, he has pursued the project with remarkable tenacity. Unfortunately for him, he has also pursued it with incompetence. After two years as president, Trump still evinces little understanding of how the government works. His vision of the presidency is entirely romantic and cinematic: The heroic chief executive uses the bully pulpit, and the rest of Washington gets in line. Trump is not the only president to underestimate the difficulty of getting things done, but it is surprising that after nearly two years in office he still doesn’t recognize that simply demanding things without any plan won’t work.”

Alex Wagner: “Trump has intersected with powerful women before—Hillary Clinton, most notably—and showed little hesitation to diminish and demean. But Pelosi, who once joked to me she eats nails for breakfast, is a ready warrior. She is happy to meet the demands of war, whereas Clinton was reluctant, semi-disgusted, and annoyed to be dragged to the depths that running against Trump demanded.”

“The speaker of the House is, technically, a coastal elite from San Francisco, but she was trained in the hurly burly of machine politics of Baltimore by her father, Mayor Thomas D’Alessandro. It is not a coincidence that Pelosi has managed, over and over, to vanquish her rivals in the challenges for Democratic leadership: she flocks to the fight, not just because she usually wins, but apparently, because she likes it.”

Speaker Nancy Pelosi said that just because the federal government is expected to fully reopen soon does not necessarily mean the State of the Union address will take place next week, CNN reports.

“Good news for George Herbert Walker Bush: As of today, he is no longer the biggest wimp ever to serve as President of the United States.” — Ann Coulter, on Twitter.

“Roger Stone, a longtime informal adviser to President Trump who has spent decades plying the dark arts of scandal-mongering and dirty tricks to help influence American political campaigns, was indicted Friday in the special counsel investigation,” the New York Times reports. “Mr. Stone was charged with seven counts, including obstruction of an official proceeding, making false statements and witness tampering.”

CNN: “The indictment’s wording does not say who on the campaign knew about Stone’s quest, but makes clear it was multiple people.”

Former CIA Director John Brennan predicted on MSNBC that there will be more indictments coming from special counsel Robert Mueller’s probe, including “a significant number of names that will be quite familiar to the average American.”

“Waiting for Mueller has always been a slow option. That slowness more and more appears a danger that the country cannot safely risk. It’s time for Congress to step in, not with a view to punishing the guilty, but with a view to protecting the security of the nation from the guilty, whether they are ever juridically punished or not.”

“Republican senators clashed with one another and confronted Vice President Pence inside a private luncheon on Thursday, as anger hit a boiling point over the longest government shutdown in history,” the Washington Post reports. “This is your fault,” Sen. Ron Johnson (R-WI) told Majority Leader Mitch McConnell (R-KY) at one point.

“Are you suggesting I’m enjoying this?” McConnell snapped back.

“The outbursts highlighted the toll the shutdown has taken on Republican lawmakers, who are dealing with growing concerns from constituents and blame from Democrats, all while facing pressure from conservatives to stand with Trump in his demand for money to build a wall on the border with Mexico.”

“U.S. officials at the southern border will begin sending some asylum applicants back to Mexico on Friday as the Trump administration implements new measures prohibiting migrants from waiting in the United States while their cases are processed,” the Washington Post reports.

“The plan, announced by the Department of Homeland Security on Thursday night, follows high-level talks between the two governments late last year as U.S. border officials struggled to handle a surge of Central Americans fleeing violence and poverty. It will be introduced in California, at the San Ysidro port of entry south of San Diego, and eventually expanded throughout the nearly 2,000-mile border.”

“Roger Stone’s indictment by the Mueller investigation reveals a series of alleged conversations between the Republican operative and Trump campaign officials regarding the timing and content of Wikileaks’ email dumps during the 2016 campaign — which Stone allegedly lied about under oath,” Axios reports.

“Multiple Trump campaign officials — although we don’t know who — were allegedly told by Stone ahead of time about WikiLeaks releases considered damaging to Hillary Clinton. One campaign official was even instructed to reach out to Stone about future releases following the DNC email release in July of 2016.”

First Read: “Why does Stone talking to the Trump campaign about WikiLeaks matter? Because Trump and his campaign seized on the WikiLeaks disclosures during the last month of the 2016 election, with Trump mentioning the word ‘WikiLeaks’ some 140 times in that final month, per NBC’s count.”

Bannon is the Trump campaign official who in October 2016 reached out to Stone “about the status of future releases by Organization 1,” which clearly refers to WikiLeaks and Julian Assange.

“Jared Kushner’s application for a top secret clearance was rejected by two career White House security specialists after an FBI background check raised concerns about potential foreign influence on him — but their supervisor overruled the recommendation and approved the clearance,” NBC Newsreports.

“The official, Carl Kline, is a former Pentagon employee who was installed as director of the personnel security office in the Executive Office of the President in May 2017. Kushner’s was one of at least 30 cases in which Kline overruled career security experts and approved a top secret clearance for incoming Trump officials despite unfavorable information, the two sources said. They said the number of rejections that were overruled was unprecedented — it had happened only once in the three years preceding Kline’s arrival.”

“The conservative Koch political network has told donors that it plans to once again stay out of the presidential race and will not work to help reelect President Trump in 2020, a move that sidelines a major player that has been pivotal in mobilizing voters on the right for more than a decade,” the Washington Post reports.

“The decision reflects a narrow path that the influential network led by billionaire industrialist Charles Koch has sought to walk in the Trump era: aligning with the president on some policy issues while withholding its electoral firepower on his behalf.”

A new Washington Post-ABC News poll finds public disapproval of President Trump has swelled five points to 58% over three months as a majority of Americans continue to hold him and congressional Republicans most responsible for the partial federal government shutdown.

Trump disapproval among independents is up 10 points in the last month to 63%.

Just 37% of the public currently approves of his job performance.

“But prosecutor Andrew Weissmann said his office isn’t planning to pursue additional charges based on Manafort’s alleged lies to federal investigators after he agreed to cooperate in the investigation into Russian election interference. Weissmann also said the special counsel does not intend to bring Manafort to trial in the charges that were a part of his plea agreement.”