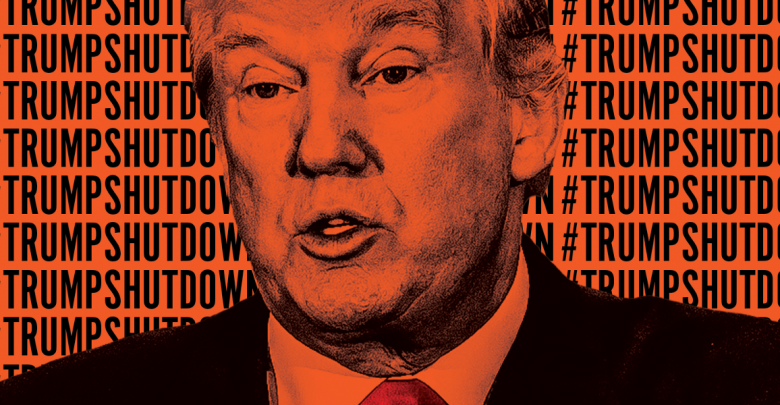 President Trump’s proposal, which included $5.7 billion in funding for a border wall, was rejected on a 50 to 47 vote, not meeting the 60-vote threshold required to move forward. Democrat Joe Manchin voted yes, but then Republicans Tom Cotton and Mike Lee voted no, because they hate all immigrants and thought Trump was being too lenient.

The Democratic proposal, which extends current government funding levels for two weeks but does not include border wall funding, was rejected on a 52 to 44 vote, also not meeting the 60-vote threshold. However, 6 GOP senators backed the measure (Collins, Gardner, Murkowski, Romney, Alexander and Isakson). So the Pelosi bill got more votes and more Republican votes than the Trump bill. That is a devastating and embarrassing blow to Trump.

Aaron Blake: “While the measure failed, the Republican crossovers are significant. Shutdowns are about both sides holding the line — and that’s especially the case on the GOP side. Trump is demanding $5.7 billion in border wall funding or he won’t reopen the government, but six GOP senators just served notice that they won’t hold that line with him.”

“They’ll emphasize that they all voted for both bills, including the one with Trump’s wall funding, and that they just want to see the government open again. But their votes can’t help but present a somewhat divided and irresolute Republican front — in contrast to a very united Democratic one. They’re all saying they won’t make the same demand Trump is making. And when it comes to past shutdowns, this is generally how things begin to head toward a conclusion.”

Chris Cillizza: “Those six senators openly defied the Republican President of the United States despite the fact — and this is important — they knew that the Democratic bill wasn’t going to get 60 votes.”

The White House is preparing a draft proclamation for President Donald Trump to declare a national emergency along the southern border and has identified more than $7 billion in potential funds for his signature border wall should he go that route, according to internal documents reviewed by CNN.

“Sen. Michael Bennet (D-CO), typically a mild-mannered, congenial guy, on Thursday unleashed all of his furor over the partial government shutdown on Sen. Ted Cruz (R-TX),” the Washington Post reports.

“In a fiery exchange that played out on the Senate floor shortly before votes on two competing bills to reopen the government, Bennet raised his voice and seemed to let loose six years of pent-up ire directed at Cruz for leading an earlier shutdown.”

“Emmanuel Saez and Gabriel Zucman, two left-leaning economists at the University of California, Berkeley, have been advising Warren on a proposal to levy a 2 percent wealth tax on Americans with assets above $50 million, as well as a 3 percent wealth tax on those who have more than $1 billion, according to Saez.”

Commerce Secretary Wilbur Ross “says he does not understand why federal employees who are furloughed or have been working without pay during the partial government shutdown would need assistance from food banks,” Roll Call reports. “Several credit unions serving workers at federal departments and agencies have been offering stopgap loans, as they have during previous shutdowns. But it’s not clear how those loans would even be sufficient as the shutdown enters its second month.” Said Ross: “I know they are, and I don’t really quite understand why. Because, as I mentioned before, the obligations that they would undertake, say borrowing from a bank or a credit union are in effect federally guaranteed.”

White House economic adviser Larry Kudlow told reporters that thousands of federal employees working without pay were “volunteering” because of “their love for the country and the office of the presidency and presumably their allegiance to President Trump.”

The Republicans are so fucking out of touch.

A new HuffPost/YouGov poll finds that 53% of Americans now believe the government shutdown is “very serious,” with 77% believing it’s at least somewhat serious. Those numbers have steadily increased over the past month. However, only about 1 in 4 Americans say that they’ve been personally affected by the shutdown or expect to be affected in the future.

A new Fox News poll finds that more voters say the federal shutdown is a bigger issue than the border: 75% consider the shutdown an emergency or major problem. That’s far more than the 59% who feel the same about the situation at the border.

Washington Post: “The president also asked Giuliani to clean up some of his misstatements publicly, complaining he created a weekend of news, including negative cable chyrons, at a time when Trump wanted public attention focused on Mueller disputing a BuzzFeed report that Trump had asked Cohen to lie to Congress.”

“The recent tensions between Trump and Giuliani highlight the unique role he plays for the president. Even though Trump has been frustrated with Giuliani’s performance several times since he became his lawyer in April, he continues to get a longer leash than most of the president’s aides and surrogates. That’s because Giuliani, whom he considers a friend, is doing what Trump wants — serving chiefly as his public defender rather than his pragmatic legal counsel — and because the president would struggle to replace him after being turned down by several high-profile attorneys reluctant to represent the mercurial Trump.”

“Cohen had been scheduled to speak with the House Oversight and Government Reform Committee in public on Feb. 7, and both the House and Senate Intelligence Committees were in discussions with Cohen’s legal team to set up closed-door briefings around the same time. But Cohen on Wednesday sought to pull out of the Oversight hearing, citing alleged threats President Trump and his lawyer Rudolph W. Giuliani had made toward Cohen’s family.”

James Hohmann: “Many conservative hard-liners inside and closely allied with the Trump administration, who have made careers out of bashing the federal bureaucracy, believed a partial shutdown would validate their view that government can function just fine without ‘nonessential’ employees. In fact, the past 33 days have done the opposite.”

“It turns out that just because workers have been categorized as ‘nonessential’ does not mean the work they do is not important. That’s why President Trump keeps calling back more and more furloughed workers to do things like process tax refunds, inspect food, approve loans and issue food stamps.”

“With no end in sight to the five-week-old impasse, the effects are poised to become both worse and more obvious to more people. One enduring result could be that Americans collectively come to appreciate the value government provides in their everyday lives to a greater degree.”

Key takeaway: “As on so many other issues, Trump and the neophytes he’s mostly surrounded himself with don’t appear to have thought through the second- and third-order consequences of their actions.”

Joshua Green: “There are two main reasons this shutdown has become a little scary—and together they should cause us to shift our appraisal of U.S. politics to something even more dire than it was before the showdown began. The first way this shutdown is distinct is that the president himself engineered it. Previous ones were always forced by the legislative branch to try to extract concessions—legal status for immigrants, reduced health-care spending—from a president of the opposing party. Such hostage-taking usually proved futile and ended in disappointment.”

“The second distinguishing feature of this shutdown is that it hasn’t produced the kind of immediate backlash that compels both sides to return to negotiations. A close look at public opinion surrounding the impasse and its central issue shows why: Post-midterm elections, the two parties have grown so polarized, and voters so tribal, that there’s no meaningful ‘center’ that Trump or Democrats risk losing.”

Five former Department of Homeland Security secretaries — including former White House chief of staff John Kelly — wrote a letter to Congress and President Trump urging them to restore funding to the agency to ensure that its “critical national security functions continue without compromise,” Axios reports.

Milwaukee Mayor Tom Barrett told the Milwaukee Journal Sentinel that organizers “have cleared the last major hurdle in the city’s quest to host the event by lining up a third-party line of credit.” Said Barrett: “I have secured a line of credit, which is guaranteed, that really meets the needs that have been brought to us. And I’m continuing to do more.”

“Civil penalties for polluters under the Trump administration plummeted during the past fiscal year to the lowest average level since 1994, according to a new analysis of Environmental Protection Agency data,” the Washington Post reports. “In the two decades before President Trump took office, EPA civil fines averaged more than $500 million a year, when adjusted for inflation. Last year’s $72 million in fines was 85% below that amount.”

“Fear that Kris Kobach will capture the Republican nomination for U.S. Senate is driving the effort to recruit Secretary of State Mike Pompeo into the race,” the Kansas City Star reports. Said GOP strategist David Kensinger: “No one wants to relive the disaster that was the Kobach campaign.” “Kensinger said attempts to entice Pompeo, who is fourth in line to the presidency as the nation’s top diplomat, to run to replace the retiring Roberts can absolutely be traced to concerns about a possible Senate run by Kobach, the party’s 2018 nominee for governor.”

Secretary of State Mike Pompeo “came close to shutting the door Wednesday on a possible U.S. Senate race, but left it open a crack,” McClatchy reports. “Pompeo did not explicitly rule out a run, but said his ‘singular focus’ was on his current post and that he plans to serve as long as President Trump wants.”