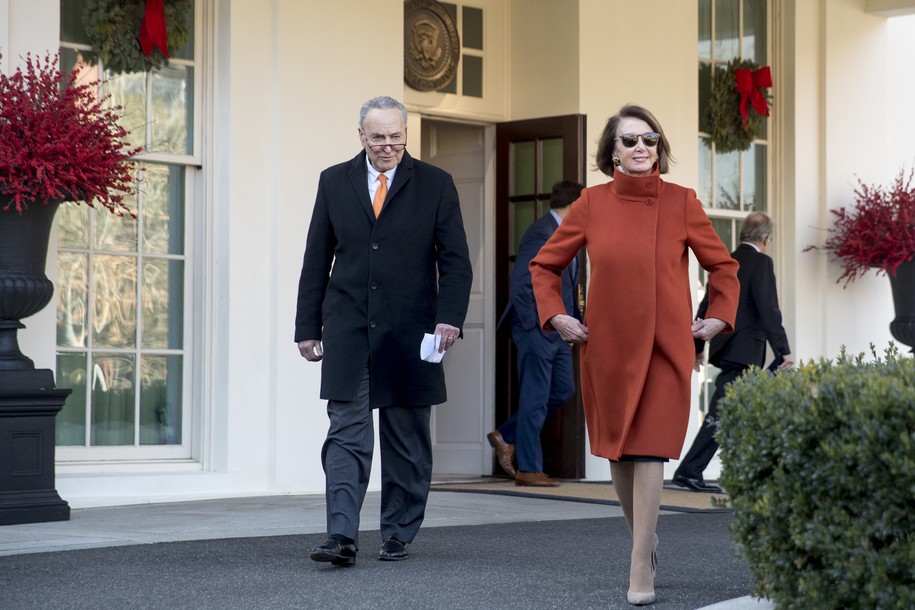 Speaker Nancy Pelosi (D-CA) said in a letter to President Trump that the House will not consider a concurrent resolution authorizing the president’s address in the House chamber until the government has opened, the Washington Post reports. “Pelosi’s response came shortly after President Trump said he would show up at the House for the prime-time speech on Tuesday.”

President Trump’s former lawyer Michael Cohen said that he will postpone his scheduled Feb. 7 testimony before the House Oversight Committee due to “threats against his family from President Trump and Mr. Giuliani,” as well as his cooperation in ongoing investigations, Axios reports. Said Cohen’s lawyer: “This is a time where Mr. Cohen had to put his family and their safety first.”

“History is not a good predictor of President Trump. He defies convention in nearly every way. He has flouted most political norms and lived to tell the tale. To apply the lessons of the past to the politics of today is largely a fool’s errand,” the Washington Post reports. “That said, there might be something to learn from the government shutdowns of 1995-96 and 2013.”

“Republicans are in almost the same position that forced them to cave those two times (if not worse). That doesn’t mean they will give in again, but it does suggest that a dire set of circumstances has forced their hand before. To the extent they stick it out, it will be because of one thing: Trump’s stubbornness. And it risks coming at the type of political cost they very clearly feared in the past.”

Greg Sargent: “All this comes as a new CBS News poll finds that 71% of Americans overall, including 71% of independents and even 43% of Republicans, say the wall is not worth shutting down the government over. Only 28% say it’s worth the shutdown. Trump’s approval is mired at 36%. Large majorities — again, including independents — say the border can be secured without the wall.”

“Trump’s public position is weakening. The restrictionist right wing he’s appeasing — the one that Trump and Miller played to by salting the ‘compromise’ with poison pills, the one that would revolt if Trump made actual concessions to Democrats — is increasingly isolated.”

A new AP/NORC poll finds just 34% of Americans approve of President Trump’s job performance. “That’s down from 42% a month earlier and nears the lowest mark of his two-year presidency. The president’s approval among Republicans remains close to 80%, but his standing with independents is among its lowest points of his time in office.”

A new CBS News poll finds President Trump’s overall approval rating has dipped three points from November to 36%. Fifty-nine percent of Americans now disapprove of the job he is doing – a high for his presidency.

A new Politico/Morning Consult poll finds that nearly 6-in-10 voters — 57% — disapprove of President Trump’s job performance, compared to the 40% that approve. In addition, 54% of voters blame Trump and Republicans on Capitol Hill for the government shutdown. Only 35% blame congressional Democrats. 57% of Americans believe it’s likely that Russia “has compromising information“ on President Trump while just 31% feel confident that Russia is not blackmailing the president.

New Gallup data finds the number of Americans without health insurance has increased by 7 million since President Trump took office. Sarah Kliff: “The country’s uninsured rate has steadily ticked upward since 2016, rising from a low of 10.9 percent in late 2016 to 13.7 percent — a four-year high.”

“The uninsured rate is still well below where it was in 2013, before the Affordable Care Act’s expansion of health insurance coverage began. But under the Trump administration, a trend of Americans gaining coverage through the private marketplaces and the Medicaid expansion appears to be reversing.”

Playbook: “On Thursday, the Senate will vote on two different bills: President Trump’s plan, to reopen government alongside a short-term DACA patch and other immigration changes, and a clean funding bill that would reopen government through Feb. 8.”

“Both of these bills are likely to fail. Neither is expected to reach 60 votes. What this does do is it gives senators a chance to vote on government funding — something Majority Leader Mitch McConnell’s Senate has not done in a few weeks.”

“There will be Republicans who vote for the clean stopgap bill — but, as of now, not enough to reopen the government. Ending this standoff doesn’t appear to be the purpose of this exercise at this point. This is a pressure-valve release, of sorts. This shows the president that neither option is workable, at the moment, and some dynamic has to change if government is going to reopen.”

Jonathan Swan: “A new immigration idea has been circulating over the past 24 hours at senior levels inside the White House and on Capitol Hill: Give a path to green cards to the 700,000 current DACA recipients.”

“Republican senators, including James Lankford of Oklahoma, have advocated for this idea. And Jared Kushner has relayed the idea to his colleagues in the White House as a possible way to break the congressional deadlock.”

Washington Post: “Buttigieg suffused his announcement with references to his youth and the generational exception he represents compared to most of the Democratic field. He turned 37 on Saturday, making him the youngest entrant so far in the presidential race.”

“Rudy Giuliani’s latest media blitz, which was filled with a dizzying array of misstatements and hurried clarifications, agitated President Donald Trump and some of his allies, who have raised the possibility that the outspoken presidential lawyer be at least temporarily sidelined from televised interviews,” the AP reports.

“The president told advisers that he felt his lawyer had obscured what he believed was a public relations victory: the special counsel’s rare public statement disputing portions of a BuzzFeed News story that Trump instructed his former attorney, Michael Cohen, to lie before Congress… The president told confidants that Giuliani had ‘changed the headlines’ for the worse and raised the possibility that Giuliani do fewer cable hits, at least for a while.”

Politico: “Trump was apoplectic after a pair of weekend media interviews by his personal lawyer, in which Giuliani said that the president had been involved in discussions to build a Trump Tower Moscow through the end of the 2016 campaign — a statement that enraged Trump because it contradicted his own public position.”

“Giuliani’s statement was the latest in a series of remarks over several months that have required walk-backs or reversals, and Trump spent much of Sunday and Monday fuming to aides and friends about his lawyer’s missteps. Most of those people share Trump’s frustration, noting that the former New York City mayor often appears to lack a mastery of the facts of Trump’s legal headaches.”

“Hundreds of Internal Revenue Service employees have received permission to skip work during the partial government shutdown due to financial hardship, and union leaders said Tuesday that they expected absences to surge as part of a coordinated protest that could hamper the government’s ability to process taxpayer refunds on time,” the Washington Post reports.

“The Trump administration last week ordered at least 30,000 IRS workers back to their offices, where they have been working to process refunds without pay… But IRS employees across the country — some in coordinated protest, others out of financial necessity — won’t be clocking in.”

New York Times: “The standoff has already forced Mr. Trump to cancel a trip to Europe to meet with global business leaders in Davos, Switzerland, at a time when the world economy faces a possible slowdown. The president has made no evident progress in filling a series of senior vacancies nor has he produced the tax-cutting plan he promised last year. He has done nothing in weeks to publicly promote priorities like fighting opioid abuse or bolstering the economy.”

Rep. Rodney Davis (R-IL) “had an uncomfortable run-in Tuesday when a fellow airplane passenger found him flying first class from Chicago to Washington, D.C.,” the HuffPost reports. Said the passenger: “Congressman, do you think it’s appropriate to fly first class while 57,000 TSA agents aren’t being paid?” Davis remained silent, prompting the person to say, “Taking that as a yes.”