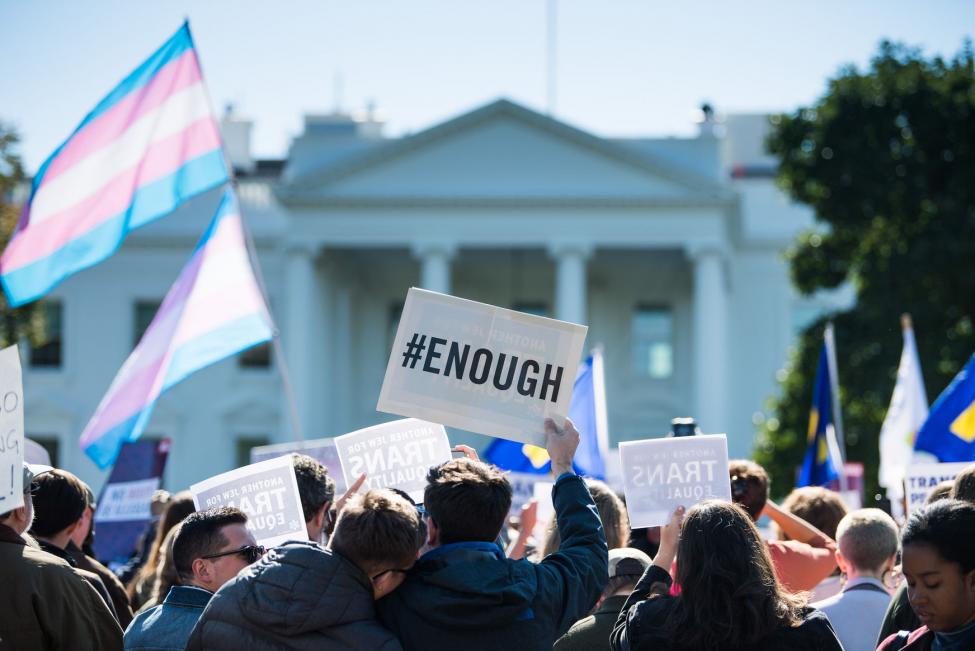 “The Supreme Court on Tuesday revived the Trump administration’s policy of barring most transgender people from serving in the military. In a brief, unsigned order, the justices temporarily stayed trial court decisions blocking the policy while litigation in the lower courts moves forward,” the New York Times reports. “The vote was 5 to 4. Justices Ruth Bader Ginsburg, Stephen G. Breyer, Sonia Sotomayor and Elena Kagan dissented.”

This is why everyone must always vote and always vote for the Democrat. If Hillary had won, there would be two new liberal justices on the court to replace Scalia and Kennedy, and possibly a replacement for RBG. There would have been a 6-3 liberal majority. Transgender rights would have been protected. But because some could not be bothered to vote because they did not like the candidate, transgender rights are set back for 30-40 years. Those who did not vote or who voted third party owe an apology to those who have lost their rights because of it.

“The Supreme Court is not likely to review during its current term the program that shields young undocumented immigrants brought to the United States as children, leaving in place the Obama-era initiative that the Trump administration has tried to end,” the Washington Post reports.

“The justices on Tuesday took no action on the administration’s request that it review the Deferred Action for Childhood Arrivals program, which has protected nearly 700,000 people brought to this country as children, commonly known as dreamers.”

“The Senate will vote Thursday on two separate bills that would bring an immediate end to the partial government shutdown: one backed by President Trump that includes $5.7 billion for his border wall and another that would simply extend funding for shuttered agencies through Feb. 8,” the New York Times reports.

“The plan, a compromise between Sen. Mitch McConnell, the majority leader, and Sen. Chuck Schumer, the Democratic leader, offers the first hint of a path out of the partial shutdown, which is now in its fifth week and has left 800,000 federal workers without pay.”

The Hill: “There is no guarantee that either bill can get the votes to pass and break the months-long stalemate that has closed roughly a quarter of the government. But the deal between McConnell and Schumer is the first glimmer of progress after weeks of entrenched back-and-forth.”

President Trump “attempted to move ahead with planning for a State of the Union speech to the U.S. Congress on Jan. 29 despite pressure from Democrats to delay it due to the government shutdown,” Reuters reports.

“An administration official said the White House sent a request to move forward with speech planning and requested approval of the House sergeant-at-arms for security officials to do a walkthrough of the venue. The request seemed likely to set up another clash between Trump and Pelosi, days after Trump abruptly refused to let her use a U.S. military plane to go on an overseas trip hours before she was to depart.”

ABC News: “Trump is preparing for two different State of the Union speeches – one a more traditional address delivered to Congress in the House chamber or some other location in D.C., the other prepared for a political rally at a location outside of Washington, D.C. that has yet to be determined.”

Washington Post: “Two years ago, Jeff Daudert was fed up with politics… and, frankly, he liked the idea of a disruptive president. But the 49-year-old retired Navy reservist has had some second thoughts.” Said Daudert: “What the fuck were we thinking? It’s silly. It’s destructive.” Daudert added that all he knows about 2020 is that he won’t be supporting President Trump: “I was certainly for the anti-status quo…. I’ll be more status quo next time.”

BuzzFeed News: “The president and his representatives have dismissed the project as little more than a notion — a rough plan led by Trump’s then-lawyer, Michael Cohen, and his associate Felix Sater, of which Trump and his family said they were only loosely aware as the election campaign gathered pace.”

“On Monday, his lawyer, Rudy Giuliani, said ‘the proposal was in the earliest stage,’ and he went on to tell the New Yorker that ‘no plans were ever made. There were no drafts. Nothing in the file.’”

“However hundreds of pages of business documents, emails, text messages, and architectural plans, obtained by BuzzFeed News over a year of reporting, tell a very different story. Trump Tower Moscow was a richly imagined vision of upscale splendor on the banks of the Moscow River.”

A judge ruled that North Carolina’s investigation into election fraud by the Mark Harris (R) congressional campaign will continue, the Charlotte Observer reports. “Harris is the Republican candidate who appeared to narrowly win an election for North Carolina’s 9th District seat in the U.S. House of Representatives in the 2018 elections. But the state has not officially certified his victory, due to an ongoing investigation into alleged fraud related to mail-in absentee ballots.”

Special counsel Robert Mueller’s team “has expressed interest in the Trump campaign’s relationship with the National Rifle Association during the 2016 campaign,” CNN reports.

Said former Trump campaign aide Sam Nunberg: “When I was interviewed by the special counsel’s office, I was asked about the Trump campaign and our dealings with the NRA.”

“The special counsel’s team was curious to learn more about how Donald Trump and his operatives first formed a relationship with the NRA and how Trump wound up speaking at the group’s annual meeting in 2015, just months before announcing his presidential bid.”

Said Trump: “The reason Sarah Sanders does not go to the ‘podium’ much anymore is that the press covers her so rudely & inaccurately, in particular certain members of the press. I told her not to bother, the word gets out anyway!”

“The U.S. Supreme Court on Tuesday let an unidentified foreign government-owned company appeal under seal a grand jury subpoena possibly related to Special Counsel Robert Mueller’s probe into Russia’s role in the 2016 election, and the firm said a ruling against it would ‘wreak havoc’ on American foreign policy,” Reuters reports.

“The Supreme Court on Tuesday said it will examine New York City’s ban on carrying a licensed and unloaded handgun outside the city limits, the first Second Amendment challenge it has accepted in nearly a decade,” the Washington Post reports.

“The decision to hear the case in the term that begins in October may signal that the reinforced conservative majority on the court is ready to consider more laws that restrict gun rights.”

“Bracing for record turnout and fearful of a repeat of the chaos that marred the 2016 caucuses, Iowa Democrats are racing to implement some of the most significant changes in the history of the first-in-the-nation event,” Politico.

“The party is shopping for larger facilities to fit expected overflow crowds, investing in new technology to stave off check-in and head counting snafus and pushing individual 2020 campaigns to create their own voter registration programs. And to abide by new rules set out by the national party, Iowa Democrats are even studying the possibility of what once would have been unthinkable: ‘Tele-caucusing,’ which would allow absentee voting by phone or possibly online for any Democrat who couldn’t make it on caucus day.

“It’s all an attempt to prepare for what’s expected to be the mother of all caucuses – a historic turnout next year in the Feb. 3 presidential caucuses, powered by a sprawling field of candidates and boiling hot anti-Trump sentiment.”

“The secret channel between the Central Intelligence Agency and spies from America’s bitter adversary included two missions to Pyongyang in 2012 during the Obama administration by Michael Morell, then deputy CIA director, and at least one by his successor, Avril Haines.”

“The channel appears to have gone dormant late in the Obama administration. Mike Pompeo re-energized it while CIA director, sending an agency officer to meet with North Korean counterparts in Singapore in August 2017.”

Rudy Giuliani told the New Yorker he knows the BuzzFeed story about President Trump telling Michael Cohen to lie to Congress is false.

When pressed again: “No tapes. Well, I have listened to tapes, but none of them concern this.”

Wall Street Journal: “The partial closure of the Securities and Exchange Commission is delaying the ability of companies to open the IPO market… The U.S. Food and Drug Administration has dramatically curtailed inspections of domestic facilities at food-processing companies during the shutdown, though unpaid inspectors have resumed work inspecting higher-risk products such as fresh fruits and vegetables, eggs, seafood and dairy products.”

“At the Internal Revenue Service, the shutdown has created delays in getting some employer identification numbers, holding up some routine business deals. … The Small Business Administration has stopped approving routine loans that the agency backs to ensure entrepreneurs have access to funds, halting their plans for expansion and repairs and forcing some owners to consider costlier sources of cash.”

“The FBI Agents Association warned Tuesday that the ongoing government shutdown is not only hurting individual FBI employees and their families, but hampering key operations,” CBS News reports.

“Some of those affected operations, according to a series of statements the association released Tuesday, include efforts to thwart the same criminal enterprises President Trump claims the shutdown is meant to defeat in the long run.”

Washington Post: “Fears are rising about the state of the world’s biggest economies, with China posting its worst annual growth in decades and the United States injecting more uncertainty with tariffs and a lengthy government shutdown.”

“China reported Monday that its economy expanded at 6.6 percent last year — a figure that would be good for many countries but represents the slowest growth for China in 28 years. Meanwhile, the International Monetary Fund downgraded its expectations for the global economy, highlighting sharp declines in Europe and warning that the risks of a major slowdown have increased.”