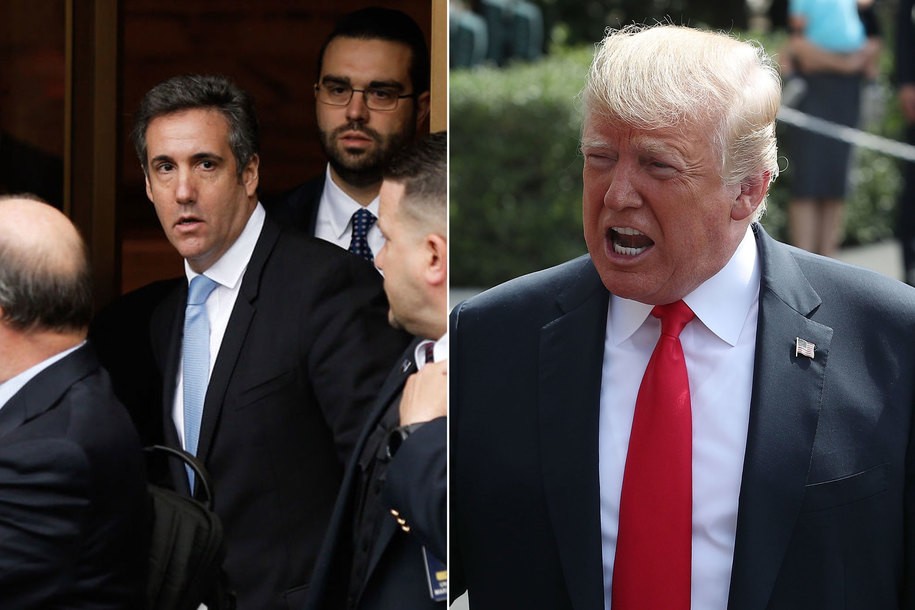 In an unusual move, the office of special counsel Robert Mueller has issued a statement disputing the Buzzfeed blockbuster that alleged President Trump directed Michale Cohen to lie to Congress. Here is the complete statement: “BuzzFeed’s description of specific statements to the Special Counsel’s Office, and characterization of documents and testimony obtained by this office, regarding Michael Cohen’s Congressional testimony are not accurate.”

It’s a very lawyerly statement designed to stop the freight train of Congressional Investigation while not fully and completely denying the story. “Description, characterization, accurate” are all terms of art. So we will see where this goes.

BuzzFeed News says “we are continuing to report and determine what the special counsel is disputing. We remain confident in the accuracy of our report.”

Although the cable news network has not corroborated last night’s bombshell report that President Trump instructed Michael Cohen to lie to Congress, CNN reports there are a handful of distinct areas where reporting from BuzzFeed News lines up perfectly with court records, including the charging documents against Michael Cohen, sentencing memos and hearings.

Jonathan Chait: “By telling this lie, Trump opened himself up to blackmail by Putin. Trump was publicly denying the contours of a business deal to which Russian intelligence was privy. Trump consistently takes enormous risks to protect his dealings with Russia from public exposure.”

“Building a tower in Moscow is not illegal. He could have admitted the project’s existence during the campaign. Or, having lied about it, he could have let Cohen admit it later. Trump has told so many lies, the news media has had to create new categories to describe their vastness.”

“So how harmful could it have been for Cohen to add one more admitted lie to a pile of lies so infinite it beggars the imagination? The lie would have been forgotten immediately. Maybe Trump decided to direct Cohen to lie for no good reason. But it may well be the case that he had to lie because confessing to the Trump Tower project would open up other questions about his dealings with Russia during the campaign. Needless to say, there is a lot there.”

Chris Cillizza: “Why, if there was nothing worrisome or untoward about Trump’s dealings with Russia, would he instruct Cohen to lie to about the depth and breadth of the conversations between the Trumps and the Russians regarding a potential construction project in Moscow? You don’t have to lie or cover up things that are no big deal, right?”

“The White House has a new, long-shot idea for getting President Trump’s border wall: persuading the Senate to take up the president’s wall request to force a deal with the Democrats, then reopen the government,” Politico reports.

“As the government shutdown enters its fifth week, the White House wants the Senate to take up legislation that would provide $5.7 billion for a barrier along the southern border, among other options that have been discussed with GOP leaders. Vice President Mike Pence and Trump son-in-law Jared Kushner met Thursday with Senate Majority Leader Mitch McConnell (R-KY), and one option batted around was for congressional committees to take up the border request and potentially amend it in committee, all while the government is shutdown, according to a person familiar with the talks.”

“But even Republicans on the Hill recognize the idea is a nonstarter.”

This seems to be what the President is planning to announce at 3 pm today. Perhaps he will deign to consult with the Democrats in the House and Senate, who will tell him to shove his wall where the sun doesn’t shine.

George Will: “Dislike of him should be tempered by this consideration: He is an almost inexpressibly sad specimen. It must be misery to awaken to another day of being Donald Trump. He seems to have as many friends as his pluperfect self-centeredness allows, and as he has earned in an entirely transactional life. His historical ignorance deprives him of the satisfaction of working in a house where much magnificent history has been made. His childlike ignorance — preserved by a lifetime of single-minded self-promotion — concerning governance and economics guarantees that whenever he must interact with experienced and accomplished people, he is as bewildered as a kindergartener at a seminar on string theory.”

“Which is why this fountain of self-refuting boasts (‘I have a very good brain’) lies so much. He does so less to deceive anyone than to reassure himself. And as balm for his base, which remains oblivious to his likely contempt for them as sheep who can be effortlessly gulled by preposterous fictions. The tungsten strength of his supporters’ loyalty is as impressive as his indifference to expanding their numbers.”

“Either the electorate, bored with a menu of faintly variant servings of boorishness, or the 22nd Amendment will end this, our shabbiest but not our first shabby presidency.”

“The announcement came after Mr. Trump met for 90 minutes in the Oval Office with Kim Yong-chol, the former North Korean intelligence chief who has acted as the chief nuclear negotiator for Mr. Kim.”

Garrett Graff: “The allegation, which Buzzfeed sourced to two federal law enforcement officials, simultaneously adds new information to both the ‘collusion’ and ‘obstruction’ sides of the Russia probe. The idea that the President of the United States directed his personal attorney to lie to Congress about his attempt to complete a multi-hundred-million-dollar deal with Vladimir Putin in the midst of the presidential campaign is, in short, as big as it gets.”

“While we’ll be unpacking the implications of the apparent revelation for days to come, there are six aspects of the new report which, if true, make clear the scale of the political peril facing the president as of Friday morning.”

“President Trump was startled Tuesday as he watched television coverage of his nominee for attorney general describing a warm relationship with the special counsel Robert Mueller in front of the Senate Judiciary Committee,” CNN reports.

“While Barr said during his hearing that Trump ‘was interested’ in hearing about the friendship, the details that emerged this week caught the President off guard, the three sources said. He bristled at Barr’s description of the close relationship, complaining to aides he didn’t realize how much their work overlapped or that they were so close.”

Ryan Goodman: “What makes the Cohen lies even worse—and yes, far worse than Watergate—is that it exposed any U.S. officials who were involved in orchestrating his false testimony to blackmail by Russia. As Barbara McQuade, former U.S. Attorney and professor at the University of Michigan Law School, wrote at Just Security, ‘in the context of counterintelligence investigations, lies can also compromise national security… A foreign adversary like Russia can use lies as leverage over government officials to coerce them into complying with its demands or else face exposure of the lies.’ As former acting Attorney General Sally Yates testified in the context of Flynn’s lying about Russian contacts, ‘To state the obvious, you don’t want your national security adviser compromised with the Russians.’”

“If Trump suborned false statements, the President would have exposed not only himself to Kremlin blackmail, but also other members of his team who, according to court documents and reporting, helped orchestrate his personal lawyer’s congressional testimony.”

McKay Coppins: “The basic theory—explained to me between weary sighs and defeated shrugs—goes like this: Washington is at an impasse that looks increasingly unbreakable. President Trump is dug in; so is Speaker Nancy Pelosi. Democrats have public opinion on their side, but the president is focused on his conservative base. For a deal to shake loose in this environment, it may require a failure of government so dramatic, so shocking, as to galvanize public outrage and force the two parties back to the negotiating table.”

“In these interviews, I heard an array of macabre hypotheticals—from airplane crashes to food-safety scares, TSA strikes to terrorist incidents. But the one theme that ran through every conversation was a sense that the current political dynamics won’t change until voters get a lot angrier.”

Lawfare notes an important item worth watching in the story about President Trump directing Michael Cohen to lie to Congress: “Trump may well have addressed this matter in his written submission to Mueller. In April, the New York Times reported that Mueller asked Trump to answer two questions: “What communication did you have with Michael D. Cohen, Felix Sater and others, including foreign nationals, about Russian real estate developments during the campaign?” and “What discussions did you have during the campaign regarding any meeting with Mr. Putin? Did you discuss it with others?”

Trump has since submitted written answers to at least some of Mueller’s questions. If he, in fact, directed Cohen to lie, as BuzzFeed News reports, did he tell Mueller the truth in this submission?”

“A day after President Trump canceled military flights for a planned congressional trip to Afghanistan, Speaker Nancy Pelosi abandoned her plans to travel instead on commercial flights due to security concerns,” the Washington Post reports.

Said Pelsoi spokesman Drew Hammill: “After President Trump revoked the use of military aircraft to travel to Afghanistan, the delegation was prepared to fly commercially to proceed with this vital trip to meet with our commanders and troops on the front lines.”

However, he added that a new State Department threat assessment indicated “that the President announcing this sensitive travel had significantly increased the danger to the delegation and to the troops, security, and other officials supporting the trip. . . . This morning, we learned that the Administration had leaked the commercial travel plans as well.”

Adam Serwer: “While evidence that the Trump campaign sought to assist the Russian effort to interfere in the 2016 election, and that the president then sought to hamper the federal investigation into that effort, has been in public view for some time, evidence that the president directed Cohen to lie to Congress would be something different entirely, a claim that the president conspired to commit a crime in pursuit of personal financial gain. Republicans have tried their best to set expectations so that only the clearest and most shocking of acts would qualify as criminal—and Trump’s reported actions not only meet but exceed them.”

“The report, if verified, provides a potentially simple narrative for a story that has often seemed complicated: Trump sought to profit from a real-estate deal in Moscow, and so defended Russia against accusations of interference, and then directed his personal attorney to commit perjury to cover up what he had done.”

A new Pew Research survey finds President Trump begins his third year with a 37% job approval rating while 59% disapprove of his performance.