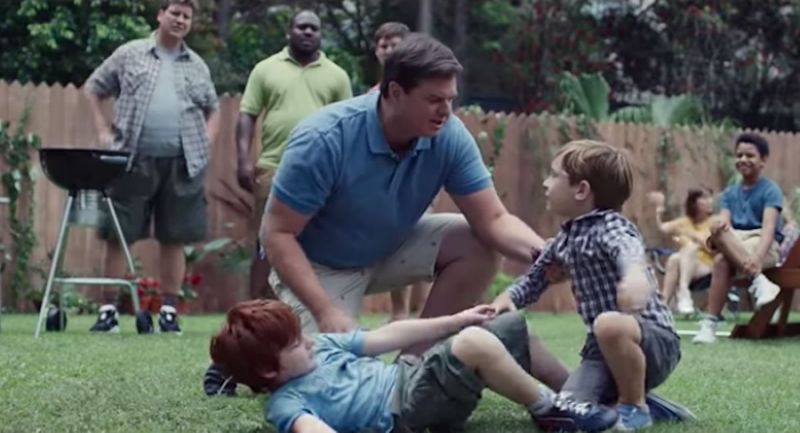 My daughter texted me yesterday asking if I had seen Gillette’s new ad. I hadn’t, so she sent me a link and I watched it.

As far as ads like this go, this one is pretty good. What I don’t understand is why some men have taken offense. One commenter summed it up: “I don’t get it. This ad valorizes men who act as moral guides, fatherly protectors, and, well, guardians of a civil society. How is that not real masculinity? Looks pretty damn traditionally masculine to me.”

I agree. And so does every superhero movie/comic ever made – which a lot of these outraged guys love. I really don’t understand why people are having such a fit over an ad depicting men stopping a child from being bullied, women being harassed and Terry Crews testimony. I don’t understand why an ad showing men doing the right thing, not caving in to peer pressure, being a hero threatens masculinity.

Actually, I do understand. If you have a problem with this ad, then I see you.

I’ve read several takes on this on this ad. Some praise it, while others bemoan it as the end of masculinity. I never thought masculinity was so fragile, but, then again, I don’t surround myself with men who have the vapors over a commercial.

One paragraph from this Vox article stood out to me. It said:

Still, this ad is a misfire, in that it is a blatant attempt to make money off a painful and ongoing collective action that has not even an indirect relationship to face razors. Is it likely that there were people at Gillette with good intentions and people at Grey who wanted to help realize them? Absolutely! However, it is inherently nonsensical to use feminism to sell men’s grooming products, or any products, as feminism is a political movement bent on dismantling current structures of power, which likely includes multibillion-dollar corporations like Procter & Gamble.

I’m having a problem with this line:

“it is inherently nonsensical to use feminism to sell men’s grooming products, or any products, as feminism is a political movement bent on dismantling current structures of power”

First, I don’t think the add is using feminism, because it doesn’t focus solely on women’s issues. Sure, that’s a part of it, but not all of it.

Second, we need to stop removing men’s behavior from misogyny, sexism and feminism. Women won’t move forward unless men change their behavior. I’ve said it a thousand times: Misogyny is a men’s issue, because it applies to men’s behavior. And that’s what this ad’s addressing – Men’s behavior.

*Do. Not. Even. Think. About. #NotAllMenning. Me. Mainly because it’s stupid and lazy, and also because the commercial goes out of its way to show good men. You know, #notallmen.

Ads for women: Be thin, be thick, love your body, your boobs look bigger in this, dye your hair, embrace your grays, these pants are slimming, be feminine, wear makeup, look natural, hide your age… Women: K.

Gillette: Men should be less shitty. Men: Don’t tell us what to do!

Fact: The only men offended by the Gillette ad are the men who need its advice the most.

One of the most common responses to this commercial is, “Stop trying to turn us into women.” Honestly, could there be a more ridiculous and revealing comment? I get that these men think there’s nothing worse than being compared to women or their body parts, but why are they defending bullying, harassing and being sheep. If we’re looking for leaders and strong men we can rule out those offended by an ad.

It’s also telling that the men so upset by this ad are the first ones to call other people snowflakes; the first ones to whine that women don’t like Nice Guys™ (which is shorthand for ‘women owe them sex’), and the ones who show strength by picking on those weaker than themselves.

Don’t be that guy.

In the end, it’s just a commercial designed to sell razors. If you have a problem with that, may I suggest looking in a mirror – because the problem isn’t the ad.