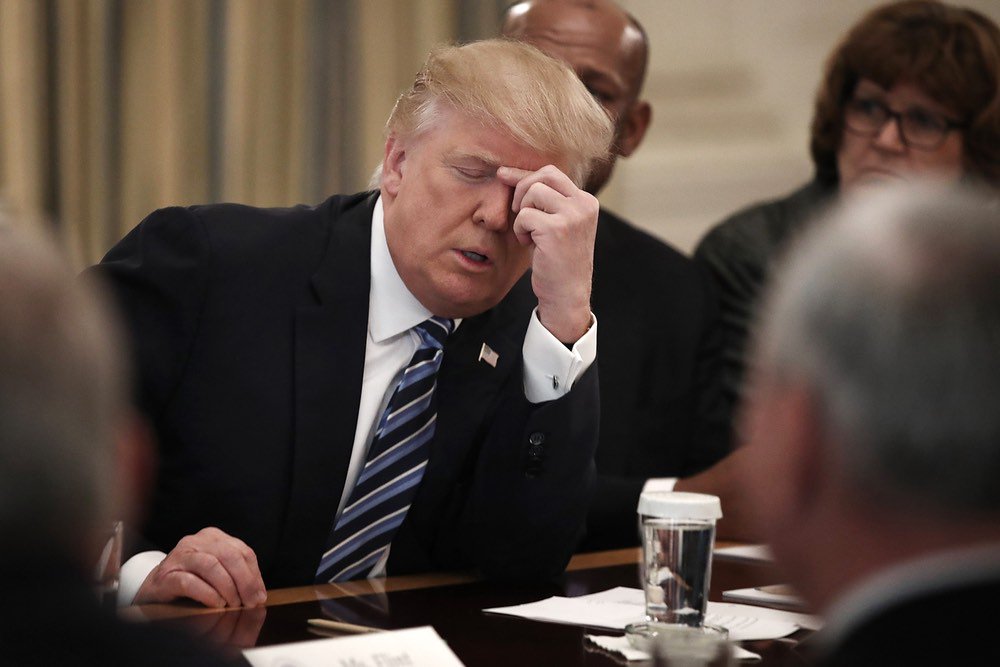 A new Quinnipiac poll finds American voters support a Democratic proposal to reopen parts of the government that do not involve border security while negotiating funding for a border wall, 63% to 30%. Every party, gender, education, age and racial group supports this idea except Republicans, who are opposed 52% to 38%.

The GOP is losing the battle as 56% of American voters say President Trump and Republicans in Congress are responsible for the shutdown, while just 36% say Democrats are responsible. Americans oppose Trump’s threat to declare a national emergency on the southern border 65% to 32%. 59% say the wall is not a good use of taxpayer dollars. Democrats actually lead Trump on the question of who voters trust more on border security by 49% to 44%, a number that stands in contrast to the GOP’s long-held lead on questions of border security.

Senate Majority Leader Mitch McConnell became the highest-ranking Republican to speak out against Rep. Steve King (R-IA) following his racially charged comments, saying that there is ‘no place in the Republican Party, the Congress or the country for an ideology of racial supremacy of any kind,” the Washington Post reports.

Said McConnell: “I have no tolerance for such positions and those who espouse these views are not supporters of American ideals and freedoms. Rep. King’s statements are unwelcome and unworthy of his elected position. If he doesn’t understand why ‘white supremacy’ is offensive, he should find another line of work.”

“A bipartisan group of rank-and-file senators are planning to hold discussions on how to end the weeks-long government shutdown, with talks between congressional leaders and the White House at a standstill,” the Washington Post reports.

“Prospects for achieving any results are uncertain as the group begins meeting this week or even fully launch. But the group’s creation is a sign senators of both parties are eager to end the shutdown, even if it means taking matters into their own hands amid an impasse between top Democrats and President Trump.”

“President Trump’s daughter, Ivanka, is overseeing the internal search for a nominee to lead the World Bank — but is not herself a candidate for the job, according to the White House,” Politico reports.

“The World Bank’s current president, Jim Yong Kim, announced last week that he will step down next month, touching off speculation about his replacement.”

The Financial Times reported that Ivanka Trump’s name was “floating around Washington” as one possibility.

Bloomberg : “Satellite-imagery analysis and leaked American intelligence suggest North Korea has churned out rockets and warheads as quickly as ever in the year since Kim halted weapons tests, a move that led to his June summit with Trump. The regime probably added several intercontinental ballistic missiles, nuclear proliferation analysts say, with one arms control group estimating that Kim gained enough fissile material for about six more nuclear bombs, bringing North Korea’s total to more than 20.”

Sen. Rand Paul (R-KY), “one of the fiercest political critics of socialized medicine, will travel to Canada later this month to get hernia surgery,” the Louisville Courier-Journal reports.

“Paul, an ophthalmologist, said the operation is related to an injury in 2017 when his neighbor, Rene Boucher, attacked him while Paul was mowing his lawn. The incident left Kentucky’s junior senator with six broken ribs and a bruised lung.”

President Trump’s nominee for attorney general will tell senators at his confirmation hearing “it is vitally important” that special counsel Robert Mueller be allowed to complete his Russia investigation, the AP reports.

Barr will say: “I believe it is in the best interest of everyone — the President, Congress, and, most importantly, the American people – that this matter be resolved by allowing the Special Counsel to complete his work.”

According to CNN, Barr will also say that Congress and the public should be “be informed of the results of the special counsel’s work.”

“In a sign that Republicans are increasingly concerned that the standoff over President Trump’s long-promised border wall is hurting their party politically, Sen. Lindsey O. Graham (S.C.) suggested temporarily reopening the government while continuing negotiations,” the Washington Postreports.

“If talks don’t bear fruit, Graham said Sunday, the president could consider following through on his threat to bypass Congress and build the wall along the U.S.-Mexico border by declaring a national emergency. … The maneuvering by a key Trump ally highlights the difficult balancing act Senate Republicans will probably face over the next two years, trapped between a mercurial GOP president and an emboldened new House Democratic majority.

“New revelations about Paul Manafort’s interactions with a Russian associate while he was leading President Trump’s campaign provide a window into how extensively the special counsel has mapped interactions between Trump associates and Russians in his 20-month-long investigation,” the Washington Post reports.

“When Manafort pleaded guilty in September to federal crimes related to his work advising Ukrainian politicians, Trump said the admissions by his former campaign chairman had ‘nothing to do’ with the special counsel’s main mission, which Trump described as ‘looking for Russians involved in our campaign.’”

“But new details inadvertently revealed in a court filing last week — including the fact that Manafort shared polling data about the 2016 race with an associate who allegedly has ties to Russian intelligence — indicate that special counsel Robert Mueller has also been scrutinizing interactions between Russians and Manafort while he helmed Trump’s presidential bid.”

“President Trump chastised his new chief of staff, Mick Mulvaney, over his handling of shutdown talks, creating an awkward scene in front of congressional leaders of both parties,” Axios reports. “Mulvaney inserted himself into the conversation and tried to negotiate a compromise sum of money… Mulvaney said ‘that if Dems weren’t OK with $5.7 [billion] and the president wasn’t OK with $1.3 [the Democratic offer] … he was trying to say we should find a middle ground,’ one of the sources said, paraphrasing Mulvaney’s remarks.”

Said the source: “Trump cut him off … ‘You just fucked it all up, Mick.’ It was kind of weird.”

President Trump “has exhibited more determination than calculation” and “offered no path to victory — other than brinkmanship,” the Washington Post reports. “Trump’s advisers are scrambling to build an exit ramp while also bracing for the shutdown to last weeks longer. Current and former aides said there is little strategy in the White House; people are frustrated and, in the words of one, ‘freaking. out.’”

“The Democratic chairmen of three House panels called on President Donald Trump to cease what they said are ‘efforts to discourage, intimidate, or otherwise pressure’ his former personal attorney and fixer, Michael Cohen, ‘not to provide testimony to Congress,’” ABC News reports.

“In the interview, Trump accused Cohen of agreeing to testify in front of Congress as part of an effort ‘to get his sentence reduced,’ and suggested without evidence that Cohen’s father-in-law might face legal exposure because ‘that’s the money in the family.’”

Wall Street Journal: “The partial federal government shutdown that became the longest on record Sunday is curtailing infrastructure projects, food-processing inspections and economic data used by Wall Street. But on a more micro level, it is showing signs of disrupting commerce as hundreds of thousands of federal workers missed out on their first payday of the closure late last week.”

“While the economic gashes aren’t enough to derail the recovery, now in its 10th year, they appear to be at least temporarily diminishing the vigor of an expansion that was already projected to slow in 2019. Output is now expected to grow at a 2.2% pace in the first quarter, less than an estimated 3.1% growth recorded in 2018.”