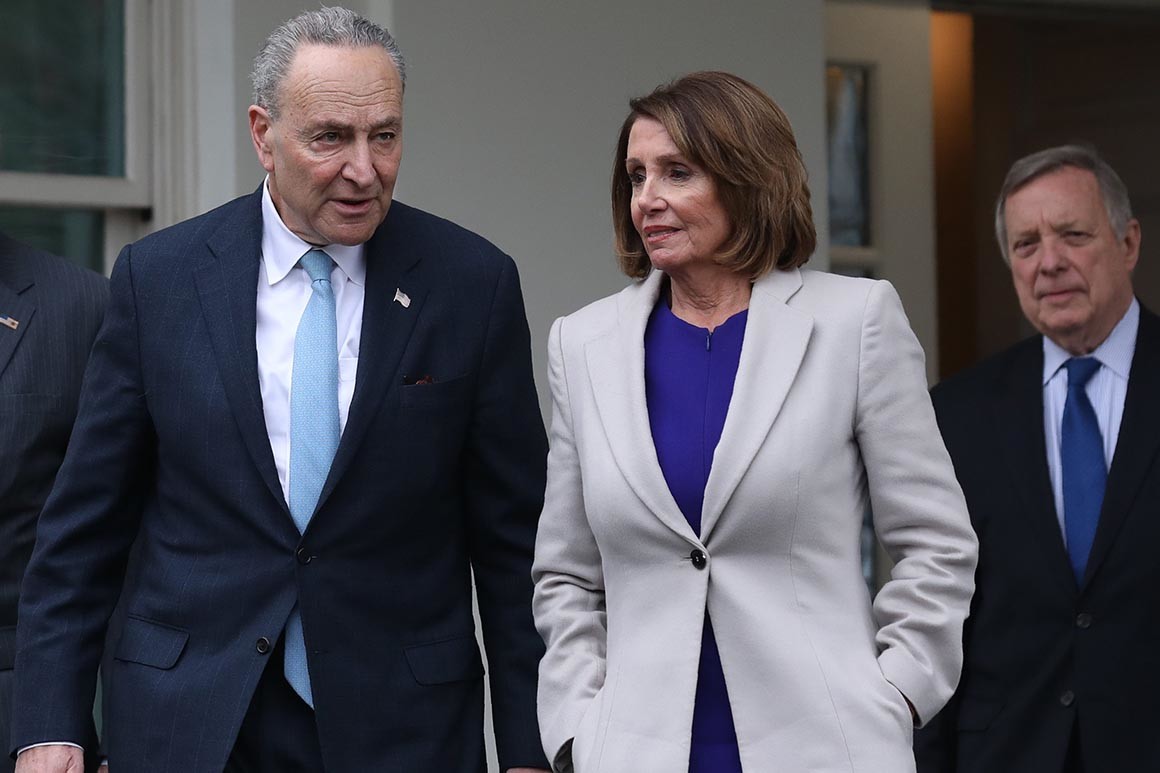 A White House meeting between President Trump and congressional leaders ended abruptly after Democrats again rejected the president’s demand for more than $5 billion to build a border wall. Trump tweeted that it was “a total waste of time.”

He added: “I asked what is going to happen in 30 days if I quickly open things up, are you going to approve Border Security which includes a Wall or Steel Barrier? Nancy said, NO. I said bye-bye, nothing else works!”

Sen. Lisa Murkowski (R-AK) joined calls today to reopen the rest of the federal government before the funding fight over the border wall is resolved, CNN reports. Said Murkowski: “I am one who is amendable to a process that would allow for those appropriations bills that have concluded some time ago that they be enacted into law — whether it’s the Department of Interior or the IRS. I’d like to see that.” That’s three Republicans (Gardner, Collins). Here’s four: Sen. Shelley Moore Capito (R-WV) also said that she could “live” with individual agency reopenings while the wall fight goes unresolved. “The pressure is going to build,” she told CNN.

A new HuffPost/YouGov poll finds that 71% of Americans now see the partial government shutdown as at least somewhat serious problem, a modest uptick from 62% last week and 61% at the beginning of the shutdown. The share who consider it very serious now stands at 42%, up from one-third last week.

A new Reuters/Ipsos poll finds a 51% majority said President Trump “deserves most of the blame” for the shutdown, up four percentage points from two weeks earlier. About a third, 32%, blame congressional Democrats.

The New York Times reports that Trump thought his Oval Office speech was pointless. “[P]rivately, Mr. Trump dismissed his own new strategy as pointless. In an off-the-record lunch with television anchors hours before the address, he made clear in blunt terms that he was not inclined to give the speech or go to Texas, but was talked into it by advisers.” Said Trump: “It’s not going to change a damn thing, but I’m still doing it.”

A source close to Trump tells Jonathan Swan that he thinks “a declaration of a national emergency at the border — which Trump stopped short of last night — remains the most likely ultimate option, because of the latitude it gives the president.” However, “conservatives, including sources in the conservative legal orbit surrounding Trump, don’t like what they view as an abuse of this authority.”

President Trump said “he may declare a national emergency to circumvent Congress and build a border wall if spending talks fail, raising the stakes for negotiations set to resume later in the day,” The Hill reports. Said Trump: “I think we might work a deal, and if we don’t we might go that route.” The president said he has the “absolute right” to declare an emergency, even though some legal scholars and Democratic lawmakers say he does not.

Playbook: “Crazy enough, this might be the only way out of this shutdown right now.”

Thanks Trump! Thanks for setting the precedent. You can credibly argue that gun massacres every week and climate change wiping out the East Coast are national emergencies. President O’Rourke will be declaring both in 2021.

Dan Balz: “Past presidents have used the Oval Office in prime time to announce military action, to lay out major initiatives or to calm the nation’s nerves in times of stress. President Trump chose the gravity of that venue for a far different reason Tuesday night — to try to create a sense of crisis in pursuit of an elusive campaign promise.”

“With the government in partial shutdown and talks with Democratic congressional leaders stalemated over funding for a border wall, the president used his address as a dramatic escalation in what has been an unsuccessful effort to sway opinion nationally and in Congress. As skillful as he is at dominating the national conversation, he has been singularly ineffective in this battle to change public minds or weaken the will of his Democratic opponents.”

Playbook: “This was not an address about a foreign conflict, but the president framed the situation at the southern border as a war.”

New York Times: “Democrats, transitioning into the House majority, have quietly sent dozens of letters in recent weeks seeking documents and testimony from President Trump’s businesses, his campaign and his administration, setting the table for investigations that could reach the center of his presidency.”

“Clear targets have emerged in the process, and some others appear to have fallen away, at least for now. Family separation and detention policies at the border have jumped to the forefront. So has the acting attorney general’s oversight of the special counsel, Robert S. Mueller III. But Democrats, after slamming House Republicans for their inadequate inquiry, do not plan to reopen a full-scale Russian interference investigation. They have also chosen to hold off on an immediate request for Mr. Trump’s tax returns.”

“Yet even restless Republicans on Capitol Hill remain wary of simply folding a losing hand. Their fear of a backlash from Trump stalwarts, and of emboldening Democrats, prods them to hold out a little longer.”

Deputy Attorney General Rod Rosenstein intends to stay in his post until special counsel Robert Mueller “submits a report to the Justice Department on the Russian meddling investigation,” NBC News reports. “The source said that would mean Rosenstein would remain until early March.”

“Several legal sources have said they expect the Mueller team to submit its report by mid-to-late February, although they said that timeline could change based on unforeseen investigative developments.”

“The White House nerve center spearheading the erratic response to the government shutdown is run by an interim director and longtime conservative firebrand whose confirmation last year was nearly derailed because of his inflammatory comments about Muslims,” the Washington Post reports.

“With limited governing experience under his belt, Russell T. Vought took the helm of the Office of Management and Budget a little more than a week ago, after agencies began closing their doors.”

“In just a few days, he has used his perch to make several controversial decisions aimed at blunting the impact of the partial government shutdown — moves meant to buy President Trump more time to drag out the closure, which is on the verge of becoming the longest in U.S. history.”

He added: “In short, I’m opposed to using defense dollars for non-defense purposes.”

First Read: “Declaring a state of emergency might have provided a way to break the stalemate, but now we’re wondering if Trump may not have the internal support from Republicans he’d need for it.”

“Long before accusations of absentee ballot fraud in a small North Carolina county cast doubt on the results of a heated 2018 congressional race, a state elections investigator spent weeks probing whether the man at the center of the current scandal was among a group buying votes,” the AP reports.

“That 2010 investigation was one of at least a half dozen instances over the last nine years that prosecutors and elections officials received complaints of serious elections irregularities in Bladen County, a rural locale of 35,000 people that has long had a statewide reputation for political chicanery by both Republicans and Democrats.”

Mark Harris, the Republican congressional candidate in North Carolina currently caught up in an investigation of alleged ballot fraud, isn’t keen to speak to the media. So much so, we saw Monday night, that he’s willing to set off a fire alarm to avoid it. Harris took an unusual route out of the Charlotte Mecklenburg Government Center on Monday after speaking to the Mecklenburg County Republicans, eventually setting off the building’s fire alarm in a sprint away from curious reporters.

Associated Press: “Over the weekend, some airports had long lines at checkpoints, apparently caused by a rising number of security officers calling in sick while they are not getting paid. Safety inspectors aren’t even on the job. A Federal Aviation Administration spokesman said Monday that inspectors are being called back to work on a case-by-case basis, with a priority put on inspecting airline fleets.”

Natalia Veselnitskaya, the Russian lawyer who in 2016 met with Trump campaign officials in Trump Tower, was charged in a separate case that showed her close ties to the Kremlin, the New York Times reports.

“Ms. Veselnitskaya was charged by federal prosecutors in New York with seeking to thwart a Justice Department civil fraud investigation into money laundering that involved an influential Russian businessman and his investment firm.”

“The case was not directly related to the Trump Tower meeting. But a federal indictment returned in Manhattan seemed to confirm that Ms. Veselnitskaya had deep ties to senior Russian government officials.”