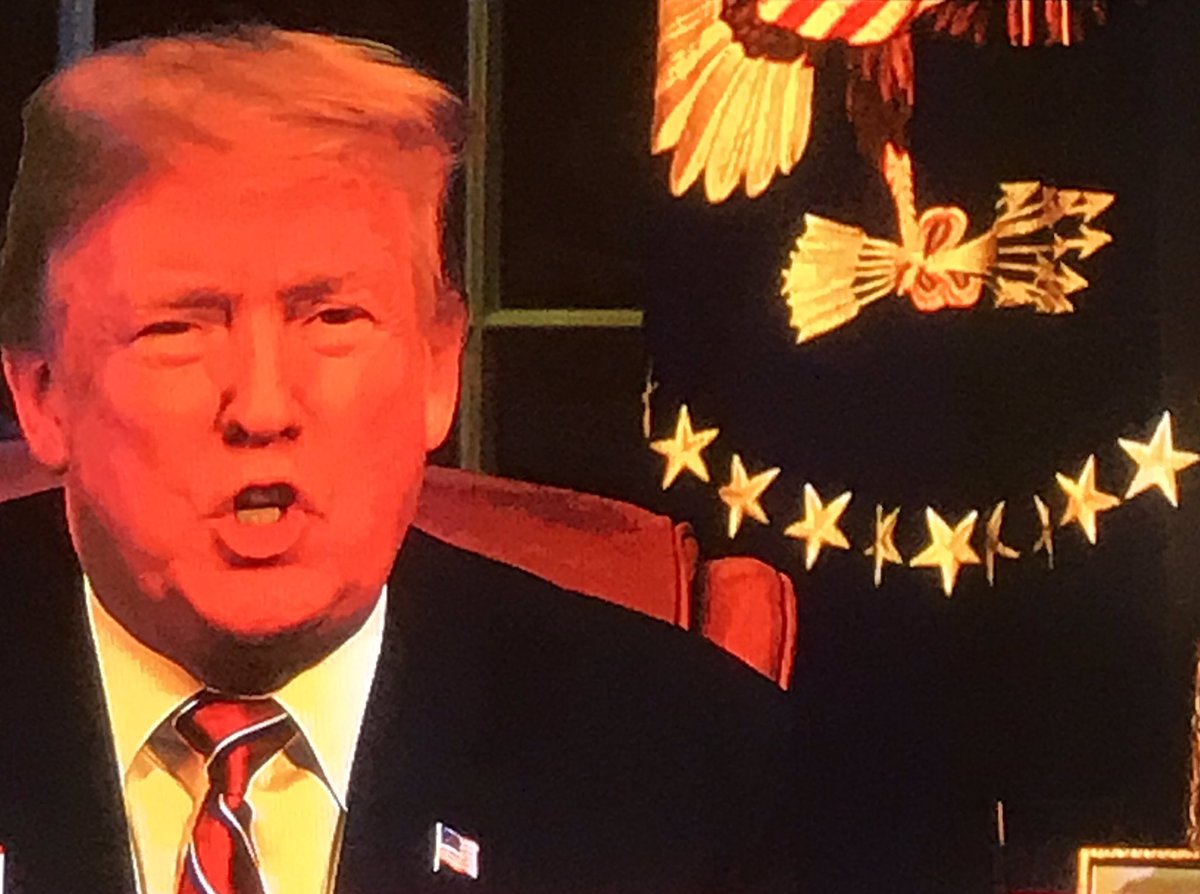 A new Reuters/Ipsos poll finds that only 35% of American adults support a congressional spending bill that includes funding for President Trump’s proposed border wall and only 25% support Trump’s decision to keep the government closed until Congress approves funding for the wall.

The big Trump speech tonight was pretty much a nothing burger. He lied about a crisis at our border, and told cherry picked stories of crime committed by illegal immigrants (ignoring the higher rates of crimes committed by American citizens). No national emergency declaration. No real news. Just lies. The networks got played and they should refuse to air any further addresses from the President going forward.

CBS News: “Eight congressional representatives serve the districts that line the 2,000-mile southern border. They are men, women, freshman politicians and Washington veterans. The Democrats among them span liberal ideologies, while one of them is a Republican.” “But they all have one thing in common: each is against President Trump’s border wall.”

First Read: “One big question about [last night’s] address: Why exactly is the president giving this address now? Immigration was Trump’s signature issue during the campaign, so why not try to make this case in his first year as president? Or at least at the start of the shutdown rather than 18 days into it? No part of this feels well timed, and — more than anything — it seems to be a tell that Republicans are getting squeamish about the political consequences of the current impasse.”

“Our other question, by the way: If Trump is really prepared to announce an emergency order to build the wall, then why is the government still shut down? If the White House has any hope of selling the border situation as a true crisis requiring an immediate emergency response, don’t they also have to reopen the government immediately? It’s hard to argue that it’s a true emergency but also not serious enough to need a federal government (including the Department of Homeland Security!) that’s operating at full strength.”

James Hohmann: “As he prepares to make the case for a wall during a televised speech from the Oval Office [last night] and with a trip to Texas on Thursday, President Trump has already made more false or misleading claims about immigration than any other subject.”

“Through the end of 2018, The Washington Post Fact Checker team documented 7,645 false or misleading claims made by Trump since taking office. Of those, 1,130 were about immigration. Claims about foreign policy and trade tied for second, with 822 claims, followed by claims about the economy (768).”

“The last week has brought a stream of additional falsehoods on the topic that’s defined his term as much as any other — and prompted a partial government shutdown now in its 18th day.”

First Read: “Being president may give you the right to ask networks for time for an Oval Office address. But on immigration — perhaps more than on any other issue — Trump is far from having earned the benefit of the doubt from the American people.”

“The alleged spy, Konstantin Kilimnik, is a former business associate of Manafort’s who is criminally charged with working with him to try to tamper with potential witnesses against Manafort before his scheduled federal criminal trials last summer.”

“Manafort’s lawyers meant for those accusations by Mueller to be sealed from public view. The sections containing the accusations are blacked out in an otherwise public document filed in federal court… But those sections are easily viewable when the sections are copied in a word processing file, and then pasted into a new document.”

Washington Post: “The apparently inadvertent revelation indicates a pathway by which the Russians could have had access to Trump campaign data.”

DEFENSE SECRETARY WANTED — President Trump is reportedly struggling to find a suitable person to replace Defense Secretary James Mattis after his hasty exit from the White House last month, Politico reported. Former Sen. Jon Kyl (R-AZ), who served three terms in the Senate before retiring and was appointed to fill Sen. John McCain’s senate seat after he passed away in August, turned down Trump’s offer to head the Pentagon. Kyl is the second person to rebuff the White House’s offer. Retried General Jack Keane also declined to take the position after Mattis left. As Politico notes, Keane also declined the job offer in 2016.

Mattis resigned in late December over Trump’s decision to pull U.S. troops out of Syria, which, as he wrote in a scathing resignation letter, Mattis thought was a grave mistake.

ONLY SIX SUSPECTED TERRORISTS CAUGHT AT THE BORDER — U.S. Customs and Border Protection encountered only six immigrants on the U.S-Mexico border in the first half of fiscal year 2018 whose names were on a federal government list of known or suspected terrorists, according to CBP data obtained by NBC News. The low number contradicts statements by Trump administration officials who said Friday that CBP stopped nearly 4,000 known or suspected terrorists from crossing the southern border in fiscal year 2018.

PELOSI CRANKS UP THE PRESSURE — “Speaker Nancy Pelosi (D-CA) and House Democrats are ramping up pressure on President Trump and Republicans to open the government amid a prolonged impasse over border wall funding that shows no signs of abating,” The Hill reports.

“Sensing a winning hand, Democrats this week will repackage a handful of uncontroversial bills funding a number of shuttered agencies — excluding Homeland Security, which covers the proposed wall — and send them off to the Senate one by one, forcing GOP leaders to explain their promised inaction on measures they supported just weeks ago.”

Playbook: “There is a growing fear that Republicans will begin getting frustrated with the White House’s position, and will vote with Democrats to open government. Pence said the administration is in touch with Republicans, and he’ll be on the Hill briefing people today.”

“White House officials are increasingly concerned that the impending real-world effects of the shutdown could swamp Republicans if they don’t find a way to make a deal fast,” according to Jonathan Swan.

“Trump’s prime-time address at 9:00 ET tonight, his first from the Oval Office, is part of an urgent P.R. strategy designed to make up for what some Republican officials feel was a languid use of the president’s bully pulpit over the holidays.” “Trump aides realize the situation could slip away from them politically as the impact is felt by taxpayers and federal workers across America.”

LEGALITY OF A NATIONAL EMERGENCY DECLARATION — President Trump “is eager to invoke a national emergency to bypass an unwilling Congress and build a border wall, according to two people familiar with his thinking, a dramatic move that would test the limits of presidential power,” Bloomberg reports.

“Whether he exercises emergency powers depends on whether his lawyers conclude it’s a legally defensible move. And that may hinge on the interpretation of an obscure legal provision allowing the Defense Department to shift military construction funds during a crisis.”

“Some White House insiders believe Trump may act even if the move is sure to face a legal challenge — raising the stakes in a partial federal government shutdown that is stretching into its 18th day.”

Lawfare looks at the legal justification for invoking emergency powers.

US CARBON EMISSIONS SURGED LAST YEAR. That’s what happens when you remove all carbon regulations. “America’s carbon dioxide emissions rose by 3.4 percent in 2018, the biggest increase in eight years,” the New York Times reports. “Strikingly, the sharp uptick in emissions occurred even as a near-record number of coal plants around the United States retired last year, illustrating how difficult it could be for the country to make further progress on climate change in the years to come, particularly as the Trump administration pushes to roll back federal regulations that limit greenhouse gas emissions.”

US SPENDS TWICE AS MUCH ON HEALTHCARE — “Americans spend more than twice as much on health care per person as their peers in developed nations, according to a new analysis from Johns Hopkins Bloomberg School of Public Health,” CNN reports.

“It’s not because people in the US use more medical services. Instead, it’s because drugs cost more, doctors and nurses are paid better, hospital administration is more expensive and many medical services have higher price tags, the study found.”

“The unknown firm had asked the high court to block a federal judge’s contempt order and financial penalties for refusing to comply with the subpoena, arguing that the company is immune from U.S. grand jury subpoenas.”

Washington Post: “The entity that is the subject of the cloaked legal battle — known in court papers simply as a ‘Corporation’ from ‘Country A’ — is a foreign financial institution that was issued a subpoena by a grand jury hearing evidence in the special counsel investigation.”

EX FELONS CAN NOW VOTE IN FLORIDA — “Tuesday is a historic day in Florida. Under an amendment passed by the voters in November, as many as 1.4 million former felons are regaining the right to vote. The referendum overturned a 150-year-old law that permanently disenfranchised people with felony convictions,” NPR reports.

“Before the change, people who served their time could apply for clemency to a board headed by the governor. But the cumbersome process and a multiyear backlog meant that only a small percentage applied.”

“As a result, more than 10 percent of Florida’s adult population was not eligible to vote.”

GOP DIGS FOR DIRT ON BETO — Because they fear him. “Republicans are feverishly digging into Beto O’Rourke’s past, a sign they view the former Texas congressman as a potential threat if he wins the Democratic presidential nomination,” The Hill reports. “GOP organizations and political action committees have spent recent weeks delving into multiple areas of O’Rourke’s life, from his voting record to a drunken driving arrest in 1998.”

BETO TO HIT THE ROAD, LEANS TOWARDS RUNNING — Former Rep. Beto O’Rourke (D-TX) “is asking aides to create an itinerary for him to take a solo road trip outside of Texas where he would ‘pop into places’ such as community college campuses, as he considers whether to enter the 2020 Democratic presidential primary,” the Wall Street Journal reports.“Mr. O’Rourke’s trip would begin from his El Paso home and keep him away from Iowa and other early-voting states.”

Beto “is leaning toward running for president, according to four people who have spoken with him or his advisers in recent days,” Politico reports. “But for a presidential contender, his radio silence is becoming increasingly awkward.” “In Iowa and New Hampshire — where Democrats are accustomed to being courted aggressively by presidential contenders — calls from Democratic Party organizers to O’Rourke’s advisers go unreturned. And a report in the Wall Street Journal on Monday that O’Rourke won’t make any decision before February and is preparing for a solo road trip — but avoiding early nominating states — bewildered even his supporters.”