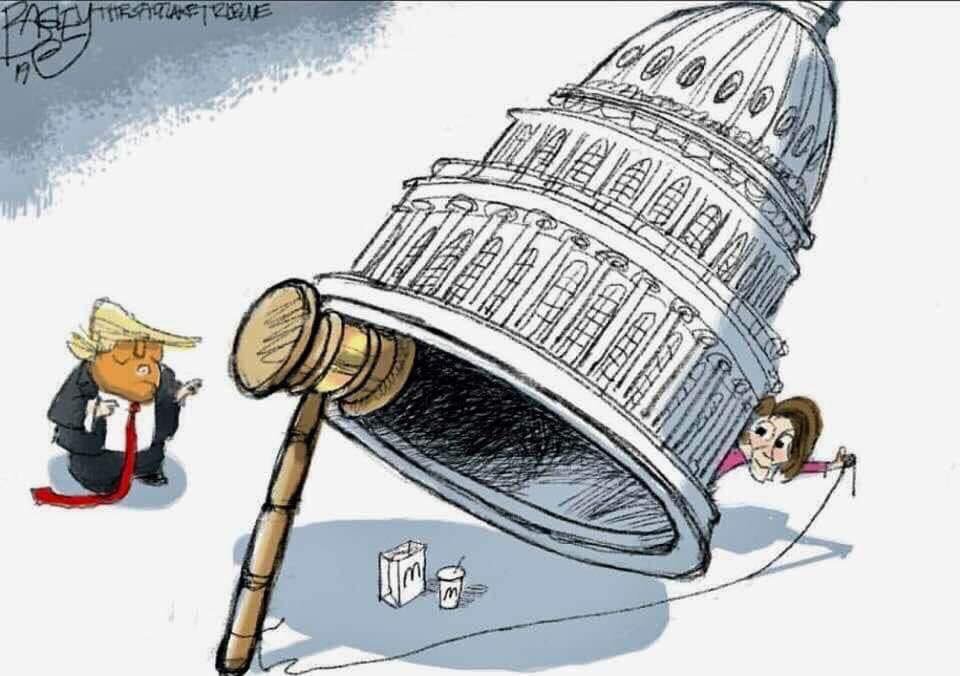 First Read: “And if you want to know why the shutdown pressure is on McConnell, just look at how Trump has unified House Democrats. The drama of whether or not Nancy Pelosi was going to get the votes she needed to be speaker ended the moment after last month’s Oval Office meeting with Trump.”

“And, of course, Pelosi got the votes she needed on Thursday.”

“Trump has done more to help Pelosi — and unify Democrats — than anyone out there.”

Perhaps the best thing that can be said of the Trump Administration is that its incompetence often undermines its malevolence.https://t.co/oZ1UoKSkEh

Acting Chief of Staff Mick Mulvaney told NBC News that President Trump is willing to “take a concrete wall off the table” in negotiations with Democratic leaders over the shutdown.

Said Mulvaney: “If he has to give up a concrete wall, replace it with a steel fence in order to do that so that Democrats can say, ‘See? He’s not building a wall anymore,’ that should help us move in the right direction.”

He added: “If that’s not evidence of the president’s desire to try and resolve this, I don’t know what is.”

Here's the video of Chris Wallace fact-checking Sarah Sanders on her false claim that terrorists are streaming over the border with Mexico.

"The state department says there hasn’t been any terrorists found coming across the southern border." Via Fox. pic.twitter.com/ByMaa9TK2S

“House Speaker Nancy Pelosi (D-CA) and other Democrats are set to unveil an outline of the legislation Friday in the Capitol. The Washington Post obtained an advance blueprint of the bill, which will move through several House committees over the coming weeks and is tentatively set for floor consideration early this year.”

“Under the blueprint, presidents, vice presidents and candidates for those offices would all be required to release 10 years of returns — a move prompted by Trump’s refusal to release any returns throughout the 2016 campaign up to the present day, breaking with the practice of bother Democratic and Republican presidents in recent decades.”

Washington Post: “Administration officials have acknowledged that they were not prepared for the potential consequences of an extended shutdown and Trump’s decision to demand wall funding. Democrats, meanwhile, are standing firm on offering no taxpayer money for the project, which Trump had long asserted would be funded by Mexico.”

“Pence was deputized by Trump to oversee Saturday’s talks, but he did not have the president’s blessing to float new or specific numbers… That meant few specifics were actually discussed.”

“Trump spent much of Saturday on the phone with allies, talking through his positioning on the shutdown… Two people regularly on his call list — Rep. Mark Meadows (R-NC) and Sen. Lindsey Graham (R-SC) — have encouraged Trump to hold fast and refuse to agree to reopen the government unless wall funding is secured.”

Putin and Trump met alone for two hours in Helsinki back in July. We still don't know the context of the conversation and the two interpreters present have been bound to silence https://t.co/OPkxtIKfSm

“Speaker Nancy Pelosi said Democrats would pass new legislation to try to reopen parts of the government next week after talks between the Trump administration and Democratic negotiators on Saturday failed to end a two-week partial government shutdown,” Reuters reports.

“Pelosi said House Democrats would seek to reopen government agencies next week through piecemeal appropriation bills, starting with the Treasury Department and the Internal Revenue Service.”

Said Pelosi: “This action is necessary so that the American people can receive their tax refunds on schedule.”

Josh Marshall: “It seems conceivable, though highly unlikely, that there’s an innocent explanation for the National Parks Service decision to keep a small site tied to President Trump’s hotel open while everything else is closed or unstaffed. Assuming it is what it looks like, another example of the federal government being harnessed to the personal finances of the President, it will be just a more minor example of what we’ll learn far more about in the years to come. There is so little transparency in this administration, so much corruption that has become commonplace, that I don’t think we can really even imagine just how deep it all runs.”

Taxing outrageous incomes is a great start. But we also need to tax outrageous wealth.https://t.co/yRgObCMp3A

“With the departure of White House chief of staff John Kelly, the misinformation emanating from President Trump has only escalated,” Axios reports.

“Alumni of this White House see a possible reason. Although Kelly was thwarted in many of his efforts to control the president, one place he made authentic inroads was clamping down on the paper flow to the Oval Office. ‘Anyone who circumvented that process was going to have a serious problem,’ said a former official who saw the transformation up close.”

Said one former Trump official: “It has devolved into anarchy.”

President Trump “is inclined to declare a national emergency to secure military funding for his long-promised southern border wall if talks between administration officials and top lawmakers from both parties continue to stall,” a White House official told CNN.

“While not the administration’s preferred plan, the use of emergency powers to fund the wall ‘provides a way out’ amid a series of contentious meetings and disagreements among Department of Homeland Security officials and Democratic lawmakers over basic facts related to border security.”

The Big Lie of Trump’s 2016 Campaign Crushed by Facts:

“The number of unauthorized immigrants living in the United States was lower in 2016 than at any time since 2004.” https://t.co/nIKkchxzPk

“Just two months ago, Sen. Elizabeth Warren risked political backlash here by opting to avoid a trip to Iowa during the critical midterm elections — the only major potential 2020 candidate to do so,” Politico reports.

“But less than a week into the new year, Warren already flipped that on its head, becoming the first major candidate to land on the ground in the first-in-the-nation presidential caucus state, lapping up media attention, locking down key staff and organizers, and capitalizing on pent-up 2020 Democratic excitement.”

“The Iowa caucuses remain 13 months away, but a pent-up demand for change in the White House is tangible among Democrats eager for the 2020 campaign to start in earnest. The throngs of voters bombarding events in Iowa are testament to something fearful for Republicans: The huge tide of Democratic voters who powered the party’s 2018 gains have not lost interest as attention turns to the 2020 presidential race.”

Federal Reserve Chairman Jerome Powell said Friday that he would not resign if President Trump were to ask him to, Politico reports.

“While Trump has repeatedly criticized Powell on Twitter for the central bank’s campaign of steady rate hikes, the Fed chairman said there has been no direct contact between him and the president in recent months. Still, he said he would be open to meeting with Trump.”

A quick note to you all.

Let us never, ever, ever give up. pic.twitter.com/DqIOXj2DUB

Playbook: “Speaker Nancy Pelosi won’t be changing her flying habits now that she has regained the speaker’s gavel. The California Democrat ‘intends to travel commercially,’ according to her deputy chief of staff Drew Hammill. The speaker can make use of an Air Force jet to travel around the country given she is second in line to the presidency.”

“Joe Rospars, who led former President Obama’s digital strategy in both 2008 and 2012, has joined Warren’s newly launched presidential exploratory committee in a senior capacity,” CNN reports. “He will oversee the senator’s grassroots mobilization, national operations and planning in the early states.”

Speaker Pelosi responds to the expletive used by Rep. Rashida Tlaib in calling for the impeachment of President Trump: "Let me just ask you this, if she were a man would they be making a fuss like that?" pic.twitter.com/aXgxBfiUve

Sen. Pat Roberts (R-KS), “an unapologetic Republican and champion of Midwest agriculture, said he wouldn’t seek a fifth term and intends to retire at close of a 40-year career representing Kansas in Washington, D.C., the Topeka Capital Journal reports.

Politico: “His retirement has already sparked interest in his seat from a number of other Kansas Republicans, heralding a potentially crowded 2020 primary — though Democrats hope they can make the race competitive after winning the governorship in 2018.”

“Senate Republican strategists are pushing Secretary of State Mike Pompeo as a failsafe candidate to keep retiring Sen. Pat Roberts’s (R-KS) seat in Republican hands in 2020, fearing the state could give Democrats an upset victory,” The Hill reports.

Said one GOP strategist: “We lost a governor’s race. We lost a key House race for a seat that was held by Republicans for several terms. We can’t afford to head into November of 2020 worried about whether a Republican can hang onto the Senate seat in a Republican state like Kansas.”

My question to the president, “Can you relate to the pain of federal workers who can’t pay their bills?” Pres. Trump:”I can relate…”. Watch: pic.twitter.com/WJCBHZQ15x

“The U.S. military plans to scale back its role in Somalia and curtail airstrikes against al-Shabab insurgents after having taken out many of the group’s senior operatives, two senior U.S. officials told NBC News, the latest signal the Trump administration is looking to cut the number of troops deployed around the world.”

“The move reflects an assessment by the administration that while the Shabab insurgency remains a threat to the Somali government and neighboring countries, it does not pose a direct danger to the U.S., current and former officials said. And it follows President Trump’s abrupt announcement last month that he had ordered U.S. forces out of Syria and asked for plans to be drawn up for a possible drawdown in Afghanistan.”