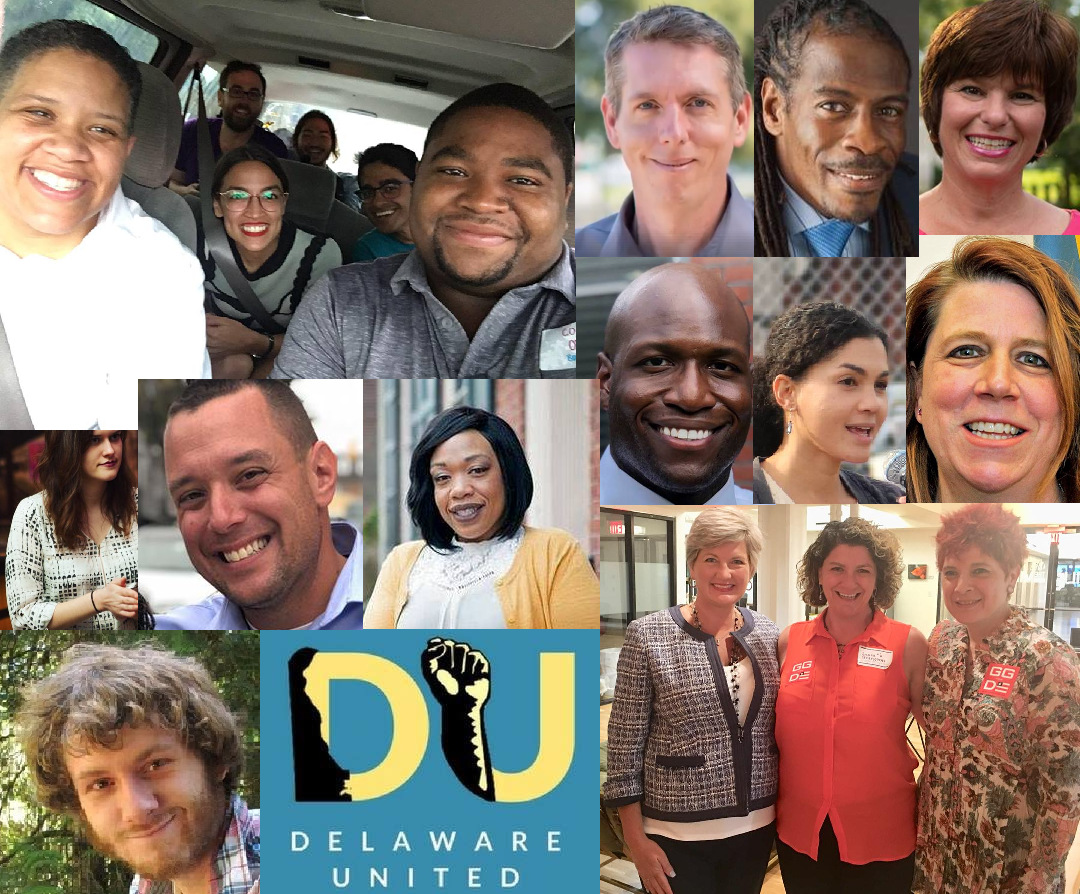 Last week we looked at the 18 people would like to leave behind in 2018.  Now we get to look at the positive and look at the 19 people (or groups of people) that we have to look forward to in 2019.

COBY OWENS — This man is a one man wrecking ball of an activist. He’s everywhere. National political actions on Capitol Hill. Local actions here at home in Delaware. He is the CEO of the Youth Caucus USA, the Chair of Network Delaware Action, Chair of Habitat for Humanity Young Professionals, a former Legislative Page for the Delaware House of Representatives, the National Constituency Coordinator for the Kerri Evelyn Harris campaign. He is a natural leader. If you haven’t seen him at a political event in the past couple of years, it’s because you didn’t leave the house. You want him on your side.

I’ve been an organizer for awhile but 2018 was extremely special to me. It was a year of personal growth and happiness. In 2018 I saw my organizing family expanded in ways I never could have imagined. Cheers to 2019, New Year same Coby pic.twitter.com/amblO0BttX

DELAWARE UNITED TRIO OF DUSTYN THOMPSON, REBECCA COTTO, AND ERIC MORRISON — I was involved in a progressive organization some years ago. I know how hard it is to make an impact, and to involve all the disparate factions in the progressive / liberal world into a seamless, unified and active movement. Dustyn Thompson, Becca Cotto and Eric Morrison are doing excellent work in making Delaware United the premiere and active progressive organization that it is today. It is a vital vehicle for progressive change in Delaware.

DREW SERRES AND LEFTWARD DELAWARE — So last night I attended a meeting of many different progressives concerning the formation of Leftward Delaware, which is either a new organization built out of the remnants of the Harris and Johnson campaigns from last year, or a purposeful partisan rebranding of Network Delaware, or both.   The meeting was spectacular and energizing.   A cold January night in an off year and here we had 50+ progressive activists gathering to organize.  In my experience that has never happened before.  I will be writing more about Leftward Delaware, but I think we will definitely be seeing and hearing more from them this year.   Regarding Drew Serres, is there a better campaign manager / trainer in Delaware at the moment? He managed the Eugene Young for Mayor campaign and then the Kerri Evelyn Harris for Senate campaign. He advises and trains other candidates, like Laura Sturgeon. If you see him managing a campaign in the next year, get on board quick.

SARAH GRACE FULTON — Sarah did an amazing job managing the Chris Johnson campaign for Attorney General.   She is also involved in the new Leftward Delaware. You may be wondering why I am highlighting campaign managers and staff of losing campaigns. Because rising and future stars in progressive politics, well, in any kind of politics, have to lose first. It is a rare thing to find a political operative with a 1.000 batting average. Losing begets lessons and refinement of strategy. So keep an eye on Sarah. She’ll be back.  In fact, she is already here.

GUILLERMINA GONZALEZ — She lost by 140 votes. She ran a great campaign in a district that will be even more competitive next time than it was in 2016. I expect her to run again and win.

DON ALLAN, JR. — How many years have we been begging for a progressive candidate downstate? Democrats tend to think that to win in red conservative districts you need to run a moderate or a conservative Democrat. That strategy may have worked decades ago when there were many more conservatives willing to vote Democratic. That’s not the way anymore. Now we must offer the Sussex voter a choice between conservative and progressive policies. Don did that, and ran a great campaign that generated lots of grassroots excitement. As with Gigi Gonzalez, he needs to run again. He promises to still be involved in progressive politics in the next year.

STEPHANIE BARRY — The last of the three first time candidates for the General Assembly that were not successful in their first run for office.  And that is nothing to be ashamed of.  In fact, most times, first time candidates who lose the first time win the second time.   I feel this will be the case for Stephanie Barry.   If for no other reason than because she got into the race late, did not have the resources of her opponent and still only lost by 409 votes.  Her opponent is an odious man whose myriad of scandals will only increase in his last term of office once the House Ethics Committee begins its investigation of his self dealing and abuses of power.  He is now the #1 target in 2020 for Democrats.

LAURA STURGEON — The Lavelle Killer. Pay attention anyone who wants to run for office against an entrenched incumbent: study the Laura Sturgeon campaign, which itself took cues from the 2012 Bryan Townsend campaign. She started early.  Canvassed every weekend herself.  Constantly putting in the work on the ground.  Her campaign likely benefited the campaign of Krista Griffith, whose 12th RD covers nearly the same ground as the 4th SD.   Her election increased the Democratic margin in the Senate, making the caucus more progressive.  She has potential to be a great leader in the Senate.

KRISTA GRIFFITH — Conversely, Krista is the Laura Sturgeon of House, also knocking off a long serving Republican in the Leadership with a campaign that started early, and basically knocked on every door in the district.  She knocked on mine.  Usually my neighborhood is ignored, since it is gerrymandered into the 12th RD.  But Krista had to compete in a contested Democratic primary, and then generate turnout for the general election from ignored yet Democratic neighborhoods like mine.   Krista Griffith ran a progressive themed campaign, but we will have to watch her to make sure she doesn’t become the female Byron Short, the Chamber’s favorite Democrat.

CHRIS JOHNSON — While he finished a disappointing third in the AG race, he has not stopped. His campaign for criminal justice reform was adopted in part by the eventual winner, Kathleen Jennings.  He plans to continue campaigning for criminal justice in the coming year, and hopefully he will be around to hold Jennings’ feet to the fire.  He was at the Leftward Delaware meeting last night.

KERRI EVELYN HARRIS — Want proof she will be around in 2019. Here are her priorities and projects she will be working on this year, as stated in an email to her supporters:

“1. Delaware Statewide Committees: Growing out of the campaign are Delaware statewide committees which will continue to build on the power of the people. All Delawareans are welcome to participate and help draft policy, lobby legislators for changes, participate in community outreach, and host education forums for communities.

The best part is all three counties will be involved in in every committee from the beginning, ensuring that we all have the ability to be heard.

These committees will focus on state and national issues. There will be committees for education, voting rights, criminal justice reform, healthcare, immigration, environmental justice, and economic justice.

If you would like to become a part of any of these committees please fill out the form attached to this link and a team member will contact you.

It will be a tough battle to win as we will have to fight against propaganda thrown at us by insurance companies looking out for their own best interests and legislators who are funded by those insurers. However, rest assured, I will not back down from a hard fight.

3. Anti-poverty: I am working with local and national organizations to fight poverty in Delaware and several other states to improve working people’s lives.

4. Green New Deal:  I am working to promote a Green New Deal that will help save our planet, rebuild the middle class by creating good-paying jobs, improve our infrastructure, make us energy independent, and improve our economy.”

NNAMDI CHUKWUOHA — The man who vanquished Charles Potter.  Here is hoping he brings a change to Wilmington politics.

MELISSA MINOR-BROWN — An upgrade on Michael Mulrooney, in that if an assault weapons ban hits the floor of the House, she will be voting yes.  Already before the session has begun,  she’s been involved in the Croda gas leak, pushing for public transparency into what happened and what needs to be done to prevent it.

RYSHEEMA DIXON — I was very impressed with her remarks at the Leftward Delaware meeting last night.  I confess I am ignorant as to Wilmington city politicians, something I am changing in 2019.   I am going to start by following her.

TIZZY LOCKMAN — The generational and ideological upgrade over former Senator Bob Marshall is hard to miss.  I am very excited to watch her maneuver in the new and more Progressive State Senate.

BRYAN TOWNSEND — Our new progressive Majority Whip.  Townsend has been such a prolific bill sponsor in the past that I wonder if he will continue even in the leadership or if new Senators Lockman or Sturgeon will pick up the slack.

DAN SELEKMAN — Former Lt. Dan of the Wilmington City Police Department.  A very popular officer in the community, but he retired last year.   He has been very involved in charity work.  He is now doing podcasts and radio shows now that is retired.  He has a social media presence.  I have no idea what his politics are, but I sense a political career in the making.