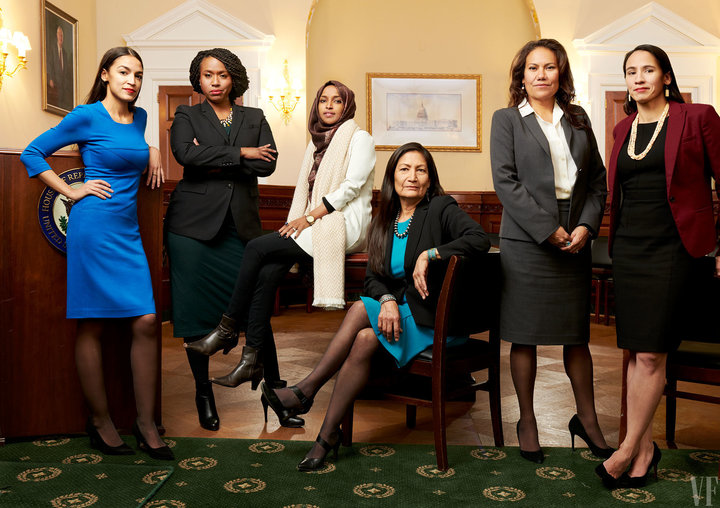 CNN: President Donald Trump told a group of lawmakers he can’t accept Democrats’ offer to re-open the government as the two sides negotiate border wall funding because he “would look foolish if I did that,” according to a person familiar with the exchange.  My dear Mr. President, looking foolish is your default position.

Playbook: “The House — which will be run by Nancy Pelosi as of tomorrow afternoon — will pass its stopgap spending bill by 7 p.m. tomorrow evening. It will fund most of the government through September, but kick DHS funding to February. Dems will make the argument that they’re governing while the White House is sowing chaos. Both of these items individually had support from the Senate.”

“The calculus by the president and many of his allies is that Pelosi is in a jam, and cannot sustain a no-money-for-a-border-wall position.”

“But Pelosi gains from this fight internally. The border security money in the stopgap — $1.3 billion — is plenty for most Democrats. Since most Democrats have ruled out a DACA-for-border-wall deal, we struggle to see what deal can be had at the moment.”

"Are you willing to come up and give him some of this money for the wall?" –@SavannahGuthrie
"No." –@NancyPelosi
"Because apparently that's the sticking point." -Guthrie
"No, no. Nothing for the wall." -Pelosi

Said Pelosi: “We can go through the back and forth. No. How many more times can we say no?”

Senate Majority Leader Mitch McConnell (R-KY) after a White House meeting with President Trump and other congressional leaders said Wednesday that the partial government shutdown could continue for days or even weeks, The Hill reports.

Said McConnell: “It was a civil discussion. We’re hopeful that somehow in the coming days and weeks we’ll be able to reach an agreement.”

Mitt Romney must have known his new op-ed would antagonize President Trump. @mckaycoppins explains why he chose to write it anyway: https://t.co/rytmMrlsMk

House Democrats are “absolutely” united behind presumed incoming Speaker Nancy Pelosi, Rep. Tim Ryan (D-OH) said, putting the caucus in line behind the longtime Democratic leader as she prepares to face off against President Trump on ending an ongoing government shutdown, Politico reports.

Said Ryan: “I don’t think anyone at any point questioned her ability to negotiate, for her to be in rooms like the one she’s going to be in today, like the one she was in last week, and be as effective as anybody else in our caucus or in our party.”

Nathaniel Rakich: “Ideologically, Warren is right where a Democratic primary candidate should want to be — it’s one of the strongest cards in her hand. According to FiveThirtyEight’s Trump Score, she votes with the president just 13.1 percent of the time, making her the third-most anti-Trump senator in the 115th Congress. Although she’s best known for her stands against income inequality and big banks, she is deeply liberal on both social and economic issues, according to an analysis of her votes and positions by OnTheIssues — although not quite as liberal as Sen. Bernie Sanders, one of Warren’s potential 2020 rivals.”

“Warren’s base is likely to overlap quite a bit with Sanders’s, the self-described democratic socialist who turned heads in the 2016 presidential primaries by winning 40 percent of Democratic delegates. Warren even seemed to make an explicit play for Sanders voters when she devoted a full minute (mid-personal bio, no less) of her four-and-a-half-minute announcement video to an economic-populist message.”

Warren is quickly assembling a robust and experienced team to lead a campaign in Iowa — an early signal of the outsized importance of a strong showing in the state, CNN reports.

23 years ago, from a refugee camp in Kenya, my father and I arrived at an airport in Washington DC.

Today, we return to that same airport on the eve of my swearing in as the first Somali-American in Congress. #Hope #Ilhan 🙏🏾 pic.twitter.com/jVeP3DOipN

Mike Allen: “After two months of behind-the-scenes jockeying since the midterms, the Democrats’ race for president is about to burst into the open with a series of candidacy announcements and staff hires, 2020 operatives tell me.”

“I’m told that ‘the Bs’ — Biden, Bernie, Beto and the billionaires, including Mike Bloomberg — can wait longer because they’ll be able to quickly raise money.”

Today Trump unleashed a flood of lies about immigration — a reminder there's no negotiating with him over this topic.

So a long-term plan to save the Dreamers is starting to take shape behind the scenes.

It's a long shot, but here's what it looks like:https://t.co/ElZDBYMivJ

Washington Gov. Jay Inslee told The Atlantic that he will for president in 2020 and outlined his single-minded focus: pulling the country back from the climate-change brink.

Said Inslee: “When you’ve been working on something for over a decade, and now seeing people awakening to that, it’s just really gratifying and heartening.”

He added there now appears to be “an appetite for someone who has credibility and a long track record and, most importantly, a vision statement. It’s changed to show an opening in a Democratic primary, I believe.”

Just over a month ago, we picked out our office, and today my family and I went in together for the first time! Check it out: pic.twitter.com/hCT7M4PVCU

“The Trump administration more than doubled the number of judges it confirmed to federal appeals courts in 2018, exceeding the pace of the last five presidents and stocking the courts with lifetime appointees who could have profound consequences for civil rights, the environment and government regulations,” NPR reports.

“A new analysis by Lambda Legal, which advocates for the LGBT community, reports that five of the country’s 12 circuit courts are now composed of more than 25 percent of Trump-appointed judges.”

A congressional source tells Mike Allen that a key provision tucked in House Dems’ 14-page opening-day rules package focuses on the federal judge in Texas who struck down the ACA (which remains in effect during appeals).

“The provision authorizes the House counsel to intervene in the lawsuit on behalf of the House of Representatives, to try to protect people with pre-existing conditions, a popular and consequential feature of the ACA.”

“Next week, Democrats will hold an additional vote on a stand-alone resolution on intervening to defend protections for people with pre-existing conditions.”

Democrats are fighting about whether deficits matter. @EricLevitz writes on why that’s good https://t.co/Xa0x2N0Y5W

Rep. Tom Reed (R-NY) said “he will vote for a set of House rule changes drafted by the incoming Democratic leadership — a rare move for what is typically a strict party-line vote and one, he said, could mean ‘consequences’ from the GOP leadership,” the Washington Post reports.

Reed said he “was compelled to support the new rules after incoming House speaker Nancy Pelosi (D-CA) and fellow Democratic leaders made good on promises to include process changes he had pushed as co-chairman of the bipartisan Problem Solvers Caucus. Those provisions were aimed at opening up the legislative process to bipartisan compromise and dissuading hostage-taking behavior by the ideological fringes of both parties.”

"The self-professed supreme dealmaker will use his presidency as a bargaining chip with federal and state authorities, agreeing to leave office in exchange for them not pursuing criminal charges against him, his children or the Trump Org." https://t.co/5QKH1MvqXm #TrumpResign

New York Times: “He has done so while building a network of nonprofits and academic centers that are staffed by his closest strategists and advisers, many making six figures while working on the issues most closely identified with him. It has effectively become a campaign-in-waiting, poised to metamorphose if the 76-year-old Mr. Biden announces his third bid for the presidency.”

“Mr. Biden is expected to reveal his plans early this year, after consulting with his family over the holidays. Having skipped the 2016 race after the grueling death of his elder son, Beau, from brain cancer, he would enter the coming Democratic contest as an early front-runner. With his political self-branding as ‘Middle-Class Joe,’ he is seen by Democratic strategists as well equipped to make inroads into President Trump’s base of blue-collar white voters.”