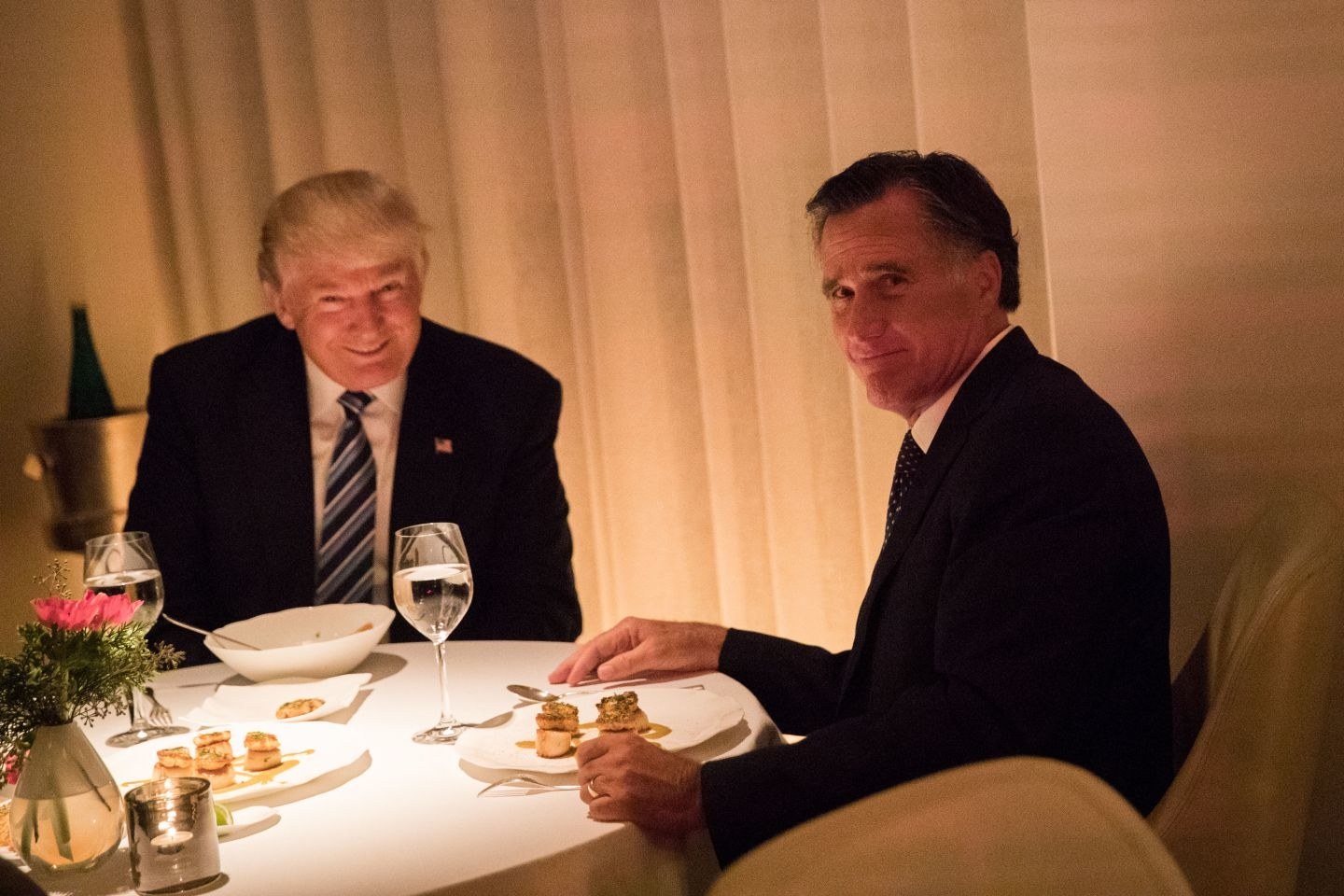 Mitt Romney, writing in the Washington Post:  “It is well known that Donald Trump was not my choice for the Republican presidential nomination. After he became the nominee, I hoped his campaign would refrain from resentment and name-calling. It did not. When he won the election, I hoped he would rise to the occasion. His early appointments of Rex Tillerson, Jeff Sessions, Nikki Haley, Gary Cohn, H.R. McMaster, Kelly and Mattis were encouraging. But, on balance, his conduct over the past two years, particularly his actions this month, is evidence that the president has not risen to the mantle of the office.”

Romney thing is just this: he’s ostentatiously shorting Trump, ie, betting he is impeached/convicted or forced to resign. And reminding party he would do all the usual stuff the donors and activists want without the drama. And figuring that’s how he wins nomination in ‘20.

“Democrats have settled on a strategy for attempting to reopen the government when they take control of the House on Thursday, aimed at ending the partial shutdown quickly — but denying President Trump the new money he wants for a border wall,” the Washington Post reports.

“Democrats plan to pass a stopgap spending bill to fund the Homeland Security Department through Feb. 8. The bill would extend the existing $1.3 billion spending level on border fencing and other security measures, far short of the $5 billion Trump has sought to build new walls along the U.S.-Mexico border.”

“But unless Trump retreats on his demands, Democrats’ legislation would not move Washington much closer to ending the partial shutdown, which has dragged on for more than a week and sent hundreds of thousands of federal workers home on furlough.”

Best Pelosi move: "We're happy to consider the Wall the moment you fulfill your campaign promise of getting Mexico to pay for it."

President Trump “signaled he would not sign an omnibus spending package House Democrats plan to bring to the floor later this week because it omits dollars for his proposed southern border barrier,” Roll Call reports.

“House Democrats plan to vote on a package that would fully fund all other currently shuttered agencies for the remainder of the fiscal year and re-open the Department of Homeland Security until early February — but with no new dollars for a border barrier.”

Stan Collender: “First, in spite of the polls showing that he’s being held responsible for the government shutdown and his pre-shutdown bragging that he would be proud to be blamed for it happening, Donald Trump apparently believes that he’s winning the shutdown fight. He currently has little incentive to do any differently than he’s currently doing.”

“Second, after taking their oaths of office, the new House Democratic majority’s immediate effort this week will be to pass legislation that, if enacted, will reopen the federal government. Therefore, House Democrats also have no reason to do anything differently.”

“Third, the reopen-the-government effort will then fall directly into Republican Majority Leader Mitch McConnell’s (R-KY) lap. With the House likely to pass something that almost certainly doesn’t have the votes to pass the Senate, it will be up to McConnell to negotiate some kind of deal with either Trump or House Democrats, take the heat for not being able to do either or cause his Republican majority to take more of the blame for not being able to resolve the situation.”

Her policy proposals will matter, but the way she manages her image will matter even more.https://t.co/fDOZUxuHZp

New York Times: “As the 2020 Democratic primary gets underway, the defining characteristic of this first stage of the race is the sheer uncertainty about who is even running. More than 30 Democrats are mulling presidential bids, but hardly any of them qualifies as an instant front-runner or a gifted, tested campaigner, and some of the biggest names could pass in the end.”

“Even beyond the field of specific candidates, this will be one of the most fluid nominating contests Democrats have had in recent decades.”

Dan Balz: “Anyone who has paid close attention to past Democratic presidential nominating campaigns should strike what they know from their memory bank. Old rules and previous assumptions aren’t likely to be worth much. What’s ahead for the Democrats will be unlike any nomination battle in recent years.”

President Trump jabbed at Sen. Elizabeth Warren (D-MA) in an interview with Fox News, saying you would have to “ask her psychiatrist” if Warren thinks she can beat him in 2020.

Trump also took a dig over Warren’s claims of Native American ancestry: “I think you have more than she does, and maybe I do too, and I have nothing. So, we’ll see how she does. I wish her well, I hope she does well, I’d love to run against her.”

With her 2020 bid, Elizabeth Warren is trying to reclaim her status as an outsider, writes @isaacdovere: https://t.co/CI6lPjymPB

President Trump took on retired four-star Army Gen. Stanley McChrystal today, saying he “got fired like a dog” and is known for his “big, dumb mouth” — comments that come on the heels of the general criticizing the president, ABC News reports.

Politico: “Many of the departments and agencies hit by the partial shutdown, which began Dec. 22, have reached a breaking point in their ability to go on with minimal disruption. They are running out of carryover cash and time to prep checks for the midmonth pay period. In a very visible sign of the growing impact of the shutdown showdown, 19 Smithsonian museums and the National Zoo will close to the public on Wednesday, their temporary funds exhausted.”

“While paychecks for federal employees went out Friday after a pay period ended on Dec. 22, workers are left wondering whether they will get their next check on Jan. 11. The pay period for that next check ends on Jan. 5. Pay processing varies from agency to agency.”

“MSNBC has something to crow about. Its news programming is sharp, energetic and relentless. Its anchors are prepared. Its correspondents are on the scene.” https://t.co/296fhYI1qd

President Trump’s pick for attorney general, William Barr, once questioned the value of a wall along the Mexican border similar to the one the president has advocated, the AP reports.

Said Barr in 1992: “I don’t think it’s necessary. I think that’s overkill to put a barrier from one side of the border to the other. In fact, the problem with illegal immigration across the border is really confined to major metropolitan areas. Illegal immigrants do not cross in the middle of the desert and walk hundreds of miles,” instead choosing more ‘certain specified routes.’”

Playbook: “Minimal windup, on the last day of the year? After her DNA test stumble this fall, it shows some wariness of a press-pundit-industrial complex that is ready to pounce on any perceived mistake. Her team clearly sees a need to make her come across as warm and accessible — hence the video kicking back with the beer.”

“Warren generates a lot of excitement on the left, obviously, but many top Democrats fear she won’t be strong enough to take on the president. Last month, Chicago Mayor Rahm Emanuel told us that in attacking Warren over the DNA stuff, Trump is ‘picking his opponent.’ We’ll see. If there’s one thing we know about politics after 2016, it’s that nobody knows anything. After all, many on Team Hillary wanted Trump as their opponent — and look how that turned out.”

“The anti-Elizabeth Warren narrative was written before the Massachusetts senator even announced she was exploring a presidential run… In interviews with Politico, advisers and allies project confidence that perceptions of her as cold or aloof will fade once people see her campaign.”

Previewing some of the scheduled 2019 elections that will feature serious competition and genuine suspense https://t.co/MT4KC5qvc5

A recent study offers new insights into the roadmap for Democrats in 2020, suggesting that independent voters are motivated by messaging related to Donald Trump’s destructive effect on democracy.  Political science and social psychology professors Christopher Sebastian Parker and Rafael Aguilera, respectively, designed an online study in which they recruited two separate groups of self-identified Democrats and independents and then tested different anti-Trump messages on them. They randomly asked participants to read from passages that emphasized either the threat of economic consolidation to the 1 percent by Trump, or Trump’s existential threat to American democracy. The first talked about concentrating wealth in “fewer and fewer hands” and economic policies that help “the rich get richer, while the middle class disappears and the poor get poorer.” The second warned that Trump’s “indifference to ethics, the rule of law, and the right to voice one’s concerns at the ballot box and in protests endanger the American way of life.”

The question they hoped to answer was which message worked better at spurring Democrats and independents to take political action. Democratic participants turned out to be responsive to both messages, but independents were a different story, the professors wrote in the Washington Post.

“Independents, however, were far more likely to say they planned to become politically involved and to vote after they read about the Trump administration threatening democracy and the rule of law. On a scale ranging from 0 to 100, independents who read about the threat to democracy were 10 points higher (in the Mechanical Turk study) and 11 points higher (in the Lucid study) to say they’d become politically active than those who received the economic threat. In fact, independents who read about Trump’s threat to democratic institutions were roughly as likely as Democrats to say they would take some political action.”

Warren cast the modern Republican Party as an outgrowth and a contributor of the self-dealing forces that elevated Trump to the presidency. https://t.co/MBQ4KW3Ijf pic.twitter.com/Kiy7TrQH7H

But that doesn’t mean that Democrats should ignore policy issues. On the contrary, the party should spend the next two years figuring out what, exactly, it will try to do if it gains policymaking power in 2021. Which brings me to the big policy slogan of the moment: the so-called Green New Deal. […]

Over all, however, Democrats can surely do for climate change what they did for health care: devise policies that hugely improve the situation while producing far more winners than losers. They can’t enact a Green New Deal right away — but they should start preparing now, and be ready to move in two years.”

CNN guest Jane Curtin: "My New Year's resolution is to make sure that the Republican Party dies." pic.twitter.com/fHmcpwaFgi