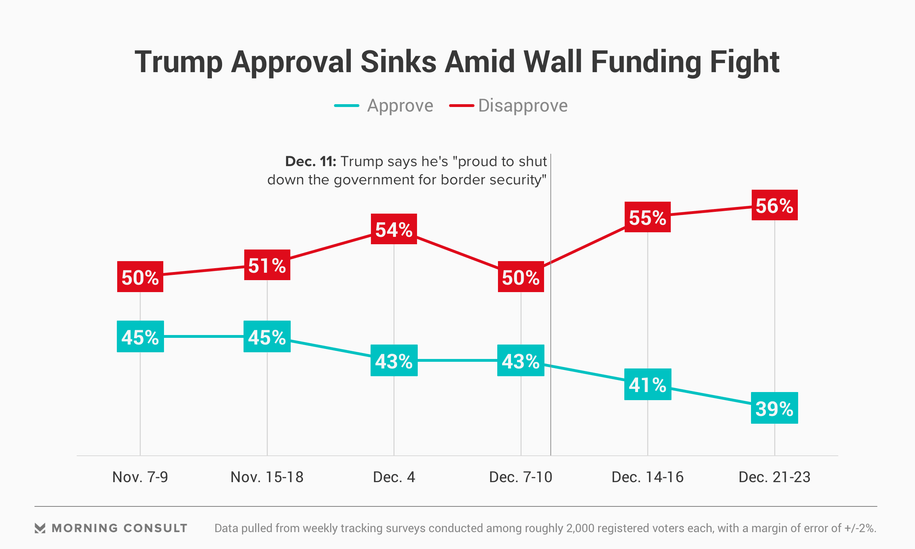 White House Chief of Staff John Kelly defended his tenure in an interview with the Los Angeles Times.

Most interesting: “Kelly said he made sure that Trump had access to multiple streams of detailed information before he made a decision — even if the president says he often relies on his gut, rather than U.S. intelligence.”

In this interview, Kelly echoes a lot of what Tillerson said, too: People try to feed Trump actual info when making key decisions, but he regularly just goes with his gut. https://t.co/AWvD2Wbj4D

Said Kelly: “It’s never been: The president just wants to make a decision based on no knowledge and ignorance. You may not like his decision, but at least he was fully informed on the impact.”

“Kelly admitted that spending nearly every waking minute of 15-hour days with a president seemingly inundated with one crisis after another has been a ‘bone-crushing hard job, but you do it.’”

The Guardian: “Kelly’s interview contained a number of statements likely to irk Trump.”

In Virginia's sixth district, no Democrat has mounted a midterm congressional campaign in twenty years. This year, four people ran in the primary.https://t.co/eqvafntpRJ

Said McChrystal: “I don’t think he tells the truth.”

When asked if Trump immoral, McChrystal said: “I think he is.”

He added: “If we want to be governed by someone we wouldn’t do a business deal with because their — their background is so shady, if we’re willing to do that, then that’s in conflict with who I think we are. And so I think it’s necessary at those times to take a stand.”

Saudi Arabia is reportedly outsourcing its war in Yemen to child soldiers https://t.co/ijFrlXsxLA

Walter Shapiro: “Democrats, unlike Republicans, have never firebombed each other with unlimited Super PAC money in presidential primaries. That Democratic record of restraint owes as much to a quirk of timing as it does to party-wide opposition to whatever-it-takes fundraising.”

“Barack Obama ran unopposed for the nomination in 2012, the first election cycle after the Citizens United decision. And in 2016, Hillary Clinton, a frontrunner with a shaky commitment to campaign reform, decided for strategic reasons not to attack the small-donor-powered Bernie Sanders.”

“But as more than a dozen serious Democratic candidates game out their potential 2020 presidential races over the holidays, thoughts turn to sugar plums and, sadly, to Super PACs. A recent front-page New York Times story, augmented by my own reporting, suggests that 2020 is likely to be the year when ambition leads some Democratic candidates to try to follow the Super PAC route to the nomination.”

“As President Trump raged against ‘angry Democrats’ in a tweet Saturday, he repeated a lie that 19,000 FBI texts had been deliberately deleted and were missing,” the HuffPost reports.

“More than 20,000 FBI agent texts lost in a technological glitch were recovered, which was clearly stated in a report early this month by the Office of the Inspector General in Trump’s own Justice Department.”

“Mar-a-Lago this year hiked ticket prices for its annual New Year’s Eve bash, with guests paying $1,000 per person for the chance to party with the President Trump at his private Palm Beach club,” the Palm Beach Postreports.

But Trump canceled plans to attend the event.

“It’s unclear whether Mar-a-Lago will let people wiggle out of their tickets at this late date. But evidently, some club members and guests have no interest in paying extra-high ticket prices if the president will not be in attendance.”

Everybody is going to be a healthcare voter in 2020, even Republicans https://t.co/JnV4AQ0hYs

“President Trump’s headstrong refusal to reopen the federal government without new border wall funding has set him on a risky and defiant path for 2019, relying on brazen brinkmanship to shore up his base support and protect him ahead of a challenging year for his administration,” the Washington Post reports.

“The latest overtures in the wake of the midterm elections, which brought about sweeping Democratic gains and the end of GOP control of Congress, stand in stark contrast to the historical behavior of modern presidents, who have moved at least briefly toward the political center after being humbled at the ballot box.”

“But Trump — counseled by a cadre of hard-line lawmakers and sensitive to criticism from his allies in the conservative media — has instead focused on reassuring his most ardent supporters of his commitment to the signature border pledge that electrified his followers during his 2016 presidential run even though it is opposed by a majority of voters.”

Russian President Vladimir Putin, in a New Year letter to President Trump, said on Sunday that Moscow was ready for dialogue on a “wide-ranging agenda,” Reuters reports.

Putin also sent New Year greetings to other world leaders including prime ministers Theresa May of Britain and Shinzo Abe of Japan, as well as Chinese President Xi Jinping.

At this point, Trump is basically howling into the void about his hallucinations.

And: Trump's package of immigration reforms got the *fewest* votes in the Senate of any package, b/c too few *Republicans* would support it. https://t.co/JUHHPvz2Yh

“President Trump blamed Democrats on Saturday for the deaths of two migrant children in detention at the southwest border this month, wielding the episodes as justification to fund a border wall,” the New York Timesreports.

“The comments came in twin posts on Twitter, where the president spent much of the day denouncing Democrats as the partial government shutdown approached its eighth day over his demand for funding for the wall.”

“The Democrats who captured the House by flipping 43 districts from red to blue received on average just over half of their large-dollar campaign funds from outside their states, another example of the nationalization of the November election that was a rebuke to President Donald Trump,” USA Todayreports.

“The defeated Republicans in those districts, by contrast, collected only about one-third of their itemized funds from outside their states.”

This is a great summary of the work the #Exvangelical movement is doing to expose evangelical authoritarianism in the U.S., written by @C_Stroop: https://t.co/7kT4y8e4tD

“A sprawling field of potential Democratic presidential candidates is simultaneously confronting the need to raise staggering sums of money — and to do so under demands from party activists to curb many of their traditional sources of campaign cash,” the Washington Post reports.

“Most of the candidates will probably run on a package of proposals to restrict money in politics and would support legislation to help overturn Citizens United v. Federal Election Commission, the 2010 Supreme Court decision that allowed unlimited spending by outside campaigns.”

“But several are going beyond that, responding to demands that they spurn outside assistance from independent groups or cease accepting donations from employees of specific companies, among other strictures. The fiercest battle so far has been over whether candidates should accept money from those employed in the oil and gas industry — one seen as acting contrary to the party’s position on climate change.”

“We must hold the older generations accountable for the mess they have created. … and say to them you cannot continue risking our future like this." Teen climate activist Greta Thunberg calls on young people to use their anger as activism. https://t.co/eB1UVf6Gmp pic.twitter.com/YTqCg5MRNy

Republicans could have run on some positive economic news (thanks, Obama!) in the 2018 midterms, but they made the decision to side with hate, spending more than $100 million to run almost 300,000 anti-immigrant ads. That decision ended up backfiring, costing the party votes, pollsters have continued to confirm.

“The combination of the immigration and the caravan issues dominated the GOP economic message voters heard by a 2:1 margin,” the Republican-led Winston Group writes in Roll Call. “That Republicans focused on that instead of the positive jobs report in the last days of the campaign gave Democrats a significant edge with late deciders.” Among voters “who heard an immigration message from GOP congressional candidates, the top issue heard, 35 percent were more favorable as a result, while 59 percent were less favorable.”

In Pennsylvania, gubernatorial candidate and face-stomper Scott Wagner hitched his wagon to Trumpism, releasing an ad on the so-called “caravan” that Donald Trump had been demonizing. The Immigration Hub and the Service Employees International Union (SEIU) found that 62 percent of moderate suburban female voters disapproved of the ad. Wagner’s bid for governor was what ended up getting stomped, losing to Democrat Tom Wolf by 17 points.

President Trump “issued an executive order freezing federal workers’ pay for 2019, following through on a proposal he announced earlier in the year,” CNN reports.

“The move, which nixes a 2.1% across-the-board pay raise that was set to take effect in January, comes as hundreds of thousands of federal employees are expecting to begin the new year furloughed or working without pay because of a partial government shutdown.”

This time a year ago, I was bartending while running a long-shot campaign for Congress.

That time felt so dark and yet so hopeful at the same time. Our odds were dismal + I was dismissed, but we felt that fighting hard for what’s right – even uphill – was worth it.

Michael Bloomberg told NBC News he’ll decide by February whether he plans to run for president in 2020.

Said Bloomberg: “Everybody wants to know what you’re going to do, and the bottom line is I’m not sure yet. I care about a bunch of issues. I care for my kids. I care for this country that’s been so good to me. And I want to see how I can help the best.”