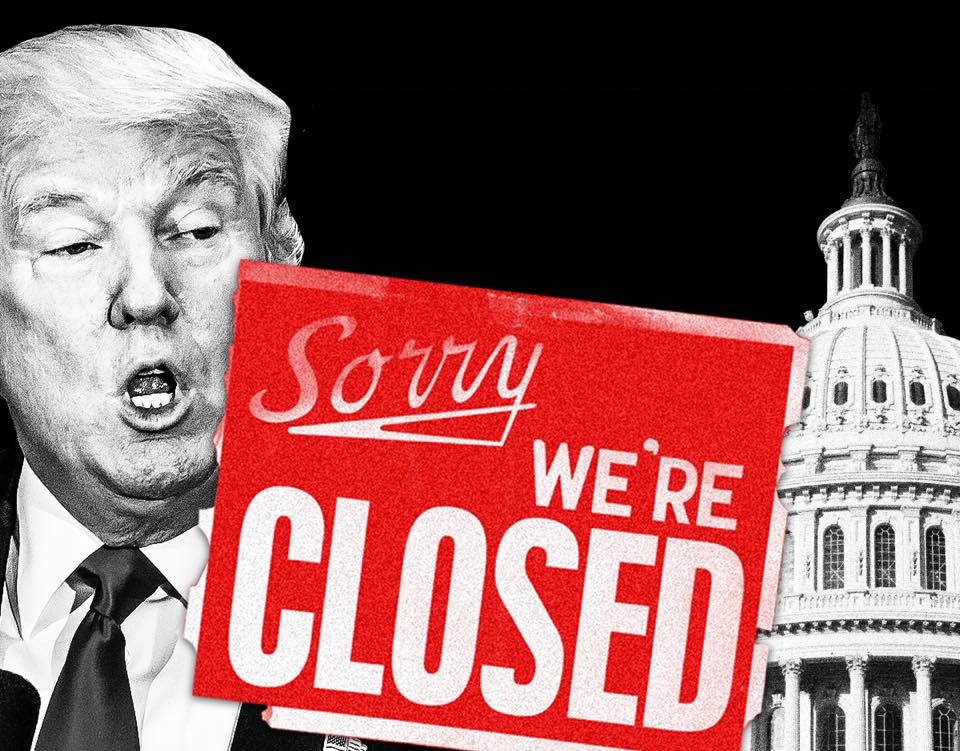 A little name change for this Open Thread column that we publish each day.  I think the new title captures all of our opinions on the news these days.

President Donald Trump and Democratic leaders are barely communicating. The shutdown’s end is nowhere in sight.  According to a Wednesday Politico report, congressional leaders worry that the current standoff points to a shutdown even longer than anticipated — possibly into mid-January.

House Minority Leader Nancy Pelosi (D-CA), once she becomes House speaker January 3, reportedly plans to force through a spending bill that omits Trump’s wall money, though Senate Majority Leader Mitch McConnell (R-KY) has not yet said whether he’d let such a bill to the floor for a vote.

President Trump “dug in his heels Wednesday as the partial government shutdown drags on, telling reporters during a trip to Iraq that he would do ‘whatever it takes’ to get a wall at the border with Mexico,” Politico reports.

Said Trump: “Whatever it takes. We need a wall. We need safety for our country.”   No votes in Congress are scheduled to break the impasse.

Five days into a partial government shutdown, 25% of the government is without funding.

That means about 400,000 federal employees are furloughed and another 400,000 are due to work without immediate pay. https://t.co/vV6IIXFsV3

Just 39% of registered voters — including 80% of Republicans — approve of the president’s job performance, while 56% — including 90% of Democrats and 57% of independents — disapprove.

Do presidential visits to combat zones offer leaders any insights, or boost morale for troops? @kcalamur takes a look: https://t.co/ps2rhZNQHY

President Trump visited American military forces in Iraq, “a surprise trip and the first visit to troops stationed abroad in a combat zone by a commander in chief who has made withdrawing the United States from foreign wars a signature issue,” the New York Times reports.

“The trip, shrouded in secrecy, came in the midst of a partial government shutdown and less than a week after Mr. Trump disrupted America’s military status quo and infuriated even some of his staunchest political allies by announcing plans to withdraw all troops from Syria and about half of those stationed in Afghanistan. The president’s decision on Syria, made over the objections of American military generals and civilian advisers, led to the resignation of Mr. Trump’s defense secretary, Jim Mattis, and fueled tensions within the national security establishment.”

This is a good article on Trump’s ties to Russia. It’s not about Russia collusion in the 2016 election. It’s about the backstory, things that happened as far back as the 1990s between Trump and the Russians.  A lot will be familiar, but Michael Hirsch has added some new reporting about the backstory and the what congressional investigators who get started next week are going to be interested in.

Some thoughts on Donald Trump's feet, draft dodging, and the legacy of the 1960s culture wars: https://t.co/8ktPndVSOp

New York Times: “For 50 years, the details of how the exemption came about, and who made the diagnosis, have remained a mystery, with Mr. Trump himself saying during the presidential campaign that he could not recall who had signed off on the medical documentation.”

“Now a possible explanation has emerged about the documentation. It involves a foot doctor in Queens who rented his office from Mr. Trump’s father, Fred C. Trump, and a suggestion that the diagnosis was granted as a courtesy to the elder Mr. Trump.”

President Trump said that he wants to visit the U.S.–Mexico border wall before he gives his State of the Union address next month, The Hill reports.

Trump, speaking with reporters during an unannounced trip to Iraq, said he planned on “going to the wall” for a “groundbreaking” event before his State of the Union address, which will be held in late January.

“I want to be clear and explicit that I am not likening Trump to Hitler, but the forces at play could lead to a future Hitler-like character if we don’t watch out. It must be remembered that another thing that Benjamin Franklin said was that he who trades his freedom for security, deserves neither. Indeed, how true.”

Acting Attorney General Matthew Whitaker claimed he earned “All-American” academic honors while at the University of Iowa on his resume and on government applications, but the Wall Street Journal found no record of it being true.

The president’s plan would grossly underfund state and local municipalities. With control of the House, the Dems are in a perfect position to offer an alternative.https://t.co/6s6uyIr16v

Playbook: “Put aside the obvious question — how are regular workers contacting the president? — it does not seem as if the president is getting itchy to end this. Remember: A vote is always at least 24 hours away, since members of Congress have to get back in town after a deal is cut. The Senate is not set to come back until tomorrow, and the House has announced no votes before tomorrow. Democrats feel as if their leverage increases with each passing day as they get closer to holding the House majority.”

Ivanka Trump and Jared Kushner are vacationing in Florida during the federal government shutdown, the Daily Mail reports.

“While 2018 was the year trade wars broke out, 2019 will be the year the global economy feels the pain. Bloomberg’s Global Trade Tracker is softening amid a fading rush to front-load export orders ahead of threatened tariffs. And volumes are tipped to slow further even as the U.S. and China seek to resolve their trade spat, with companies warning of ongoing disruption. Already there are casualties.”

“Recent data underscore concerns that trade will be a drag on American growth next year. U.S. consumers are feeling the least optimistic about the future economy in a year, while small business optimism about economic improvement fell to a two-year low and companies expect smaller profit gains in 2019.”

Washington Post: “A global economy that until recently was humming has broken down, a sharp contrast to the picture just a year ago when the world was experiencing its best growth since 2010 and seemed poised to do even better.”

Could a Black Democrat Be Best Positioned to Win in 2020? https://t.co/NyulhVgHfD

New York Times: “The first votes of the Democratic presidential primary remain more than a year away, but black voters are keenly aware of the prominent role they will play in choosing the next nominee. In 2016, Mr. Sanders’s ‘political revolution’ flamed out with black voters, and Hillary Clinton fell short of the robust black turnout she needed to defeat Donald Trump.”

“This time around, Democrats are weighing how to reach out to the black community in the primary without losing the ability to appeal to the suburban and working class whites who propelled Mr. Trump to victory. As the party searches for a candidate who can combine those messages — from a field likely to include several racial minorities — many black voters want to be engaged in a manner that reflects their electoral power, and not passed over in favor of a strategy that prioritizes Mr. Trump’s heavily white coalition.”

Sen. Sherrod Brown (D-OH) “hasn’t decided whether he’s running for president — but he’s checking off a lot of the boxes that come along the way,” Politico reports.

“The Ohio Democrat is reaching out to fellow senators and party officials in early primary and caucus states. His team is collecting résumés for potential campaign workers in those states.”

“He is airing a broad campaign theme with a concise slogan — ‘the dignity of work’ — in a rising number of press interviews and TV appearances, and he wants to road-test the theme in speeches or town hall-style events.”

New York Times: “In an interview, Mr. Brown said those who characterize him as a politician for the ‘white working class’ are missing the point, because his message on the ‘dignity of work’ — which is inspired by a speech from Martin Luther King Jr. — specifically acknowledges the existence of discrimination and has support throughout Ohio’s minority communities.”

The source said that Mnuchin “could be in ‘serious jeopardy’ with Trump, who regularly rages at Cabinet members he feels have made mistakes, before he cools off.”

“Trump nevertheless vouched for Mnuchin publicly, shifting blame for the market volatility to the Federal Reserve instead.”

It’s a shame that an idea as sensible as SCOTUS term limits has so little chance of gaining traction. FWIW, I think it would greatly improve things and could be implemented without a constitutional amendment. https://t.co/z3uvGvt6PD

Associated Press: “Wednesday brings the first full business day after several government departments and agencies closed up over the weekend due to a budgetary stalemate between President Donald Trump and Congress. And there is no end in sight.”

“So far, the public and federal workers have largely been spared inconvenience and hardship because government is closed on weekends and federal employees were excused from work on Christmas Eve and Christmas, a federal holiday.”

New York Times: “The first votes of the Democratic presidential primary remain more than a year away, but black voters are keenly aware of the prominent role they will play in choosing the next nominee. In 2016, Mr. Sanders’s ‘political revolution’ flamed out with black voters, and Hillary Clinton fell short of the robust black turnout she needed to defeat Donald Trump.”

“This time around, Democrats are weighing how to reach out to the black community in the primary without losing the ability to appeal to the suburban and working class whites who propelled Mr. Trump to victory. As the party searches for a candidate who can combine those messages — from a field likely to include several racial minorities — many black voters want to be engaged in a manner that reflects their electoral power, and not passed over in favor of a strategy that prioritizes Mr. Trump’s heavily white coalition.”