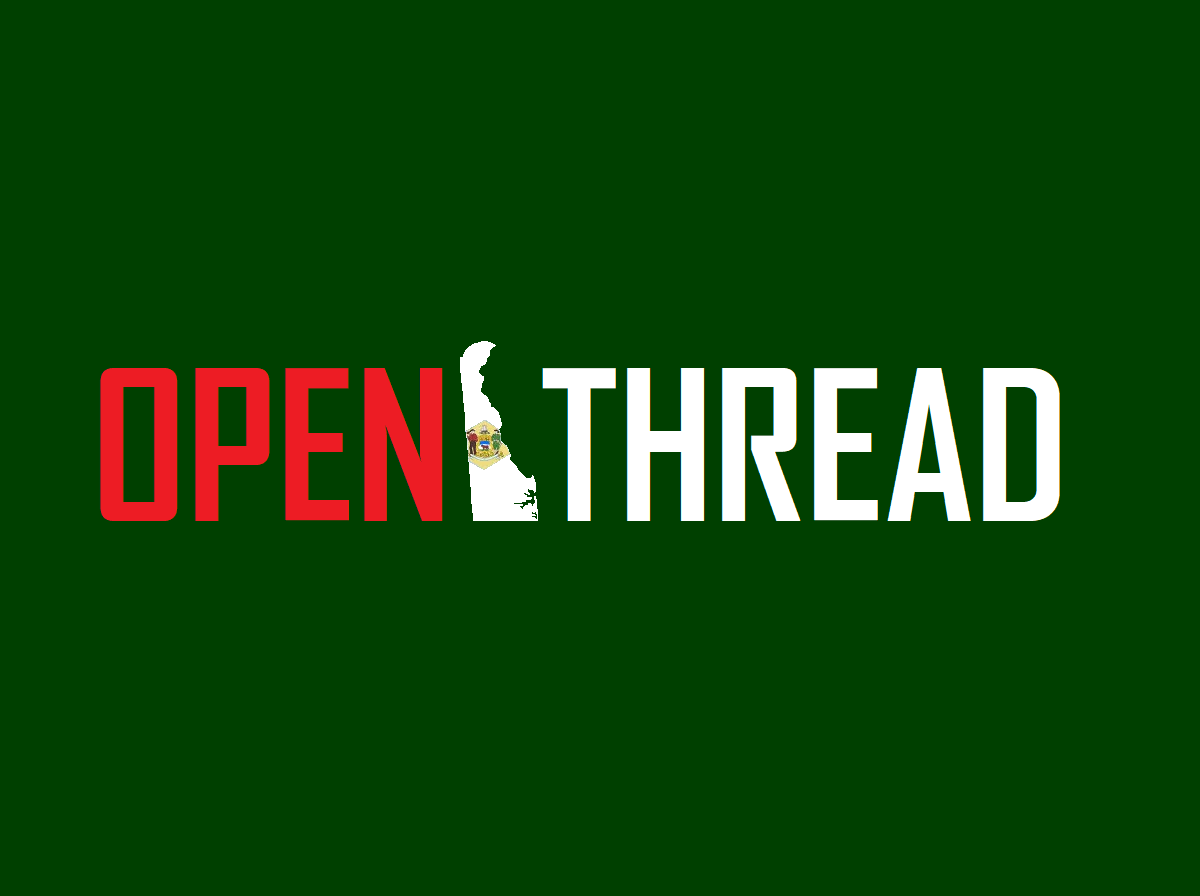 Merry Christmas and Happy Holidays from everyone at Blue Delaware.  We hope you have a wonderful, relaxing holiday with friends and family.

“The Justice Department is one of several government entities that would be affected by a partial government shutdown, but not everyone is expected to pack their bags and go home,” CNN reports.

“While the Justice Department oversees special counsel Robert Mueller’s investigation into Russian interference in the 2016 election, Mueller’s office will be able to continue working even if there is a partial government shutdown.”

The secret weapon of @Ocasio2018 is progressive authenticity, down-to-earth honesty and a refusal to play by the tired old rules everybody says you have to. https://t.co/2jagH0GeRo

“The Supreme Court appeal comes after a federal appeals court ruling that ordered the company to comply with the subpoena, which required it to turn over ‘information’ about its commercial activity in a criminal investigation. The appeals court also said the company could face fines for every day of noncompliance.”

As the earlier report notes, firing Powell “could have potentially devastating ripple effects across financial markets.”

“In a precautionary move, Treasury Secretary Steven Mnuchin spent Sunday on the phone speaking with the chief executives of six of the country’s largest banks to avoid yet another market whiplash when Wall Street opens Monday,” CNN reports.

“The secretary… tried to get ahead of further market jitters following reports that President Trump was consulting advisers about whether he had the legal authority to fire Federal Reserve Chairman Jerome Powell.”

Axios: “It’s unclear Trump would have the legal authority to take such action. Such a move would also undermine international faith in the Fed.”

"Is it not bizarrely unaware to salute yourself for an accomplishment that you manifestly failed to accomplish?" @DavidFrum on Paul Ryan's self-congratulatory tweetstorm: https://t.co/wMe6O9r2cU

“For two years, they tried to tutor and confine him. They taught him history, explained nuances and gamed out reverberations. They urged careful deliberation, counseled restraint and prepared talking points to try to sell mainstream actions to a restive conservative base hungry for disruption. But in the end, they failed,” the Washington Post reports.

“Trump will enter his third year as president unbound — at war with his perceived enemies, determined to follow through on the hard-line promises of his insurgent campaign and fearful of any cleavage in his political coalition.”

“So far, the result has been disarray. The federal government is shut down. Stock markets are in free fall. Foreign allies are voicing alarm. Hostile powers such as Russia are cheering. And Republican lawmakers once afraid of crossing this president are now openly critical.”

Foreign Policy: “As late as 2003, Trump was in such desperate financial trouble that at a meeting with his siblings following his father’s death he pressed them to hurriedly sell his father’s estate off, against the late Fred Trump’s wishes, the New York Times reported in an investigation of Trump family finances in October. And his businesses kept failing: In 2004, Trump Hotels and Casino Resorts filed for bankruptcy with $1.8 billion dollars of debt.”

“But Trump eventually made a comeback, and according to several sources with knowledge of Trump’s business, foreign money played a large role in reviving his fortunes, in particular investment by wealthy people from Russia and the former Soviet republics. This conclusion is buttressed by a growing body of evidence amassed by news organizations, as well as what is reportedly being investigated by Special Counsel Robert Mueller and the Southern District of New York.”

The Hill: “When a district judge in Texas ruled Obamacare unconstitutional last week in a case brought by Republican states, it gave Democrats another opportunity to box in GOP lawmakers on protections for people with pre-existing conditions — a line of attack that Democrats credit with helping them win back the House.”

“With an appeal of the decision certain, and a possibility it will reach the Supreme Court, the case could haunt Republicans defending their seats in 2020, when Democrats hope to take back the Senate and the White House.”

Michael Bloomberg: “With the first two years of Donald Trump’s presidency drawing to a close, the past week all too perfectly exemplified its destructive effect on competent government in Washington — and it should give all Americans, in all parties, cause for concern.”

“On Thursday, one of the last remaining seasoned and respected professionals at the top of the administration announced his resignation, for reasons he explained in a letter that was as courteous as it was devastating. On Saturday, government services were (yet again) shut down because of the quarrel between Congress and the White House over the president’s obsession with a border wall that won’t work but will waste billions of taxpayer money. And in between, the stock market dove to its worst week since 2011, as investors concerned about Trump’s taste for trade wars delivered a vote of no-confidence.”

“Each of these mistakes has a common denominator: Trump’s recklessly emotional and senselessly chaotic approach to the job. At the halfway mark of this terrible presidency, one has to wonder how much more the country can take.”

“Mick Mulvaney has not officially started as the new White House acting chief of staff, but already some important players on Team Trump are worried he isn’t up to the job,” CNN reports.

“Members of the President’s campaign and political team are pushing the idea of a new White House position: counselor to the President and chief strategist. The idea is that a Democratic House will only increase the investigative burden on the White House at a time it is essential to keep the White House in sync with the re-election campaign.”

“Some of these advisers don’t believe Mulvaney has the skillset for the coming challenge. He is a former House member who now serves as the President’s budget chief. Others see the need for another senior person regardless of whether Mulvaney transitions smoothly into the new role.”

American workers lose when compared to the rest of the world. https://t.co/xSV0QfnTSi

Said Schiff: “I’m prepared to make sure we do everything possible so that the public has the advantage of as much of the information as it can.”

Paul Ryan blames politics for thwarting his vision. Politics is what saved us from it. https://t.co/TxWBshZT9M

“Mississippi’s Republican governor is considering Medicaid expansion, the first sign that long-held GOP opposition could be wilting in the Deep South after an election that was a big winner for the Obamacare program,” Politico reports.

“Republican Gov. Phil Bryant, entering his final year in office, has been engaged in quiet talks about adopting expansion after resisting for years.”

“Forces loyal to Vermont Sen. Bernie Sanders are waging an increasingly public war against Texas Rep. Beto O’Rourke, the new darling of Democratic activists, as the two men weigh whether to seek the party’s presidential nomination in 2020,” NBC News reports.

“The main line of attack against O’Rourke is that he isn’t progressive enough — that he’s been too close to Republicans in Congress, too close to corporate donors and not willing enough to use his star power to help fellow Democrats — and it is being pushed almost exclusively by Sanders supporters online and in print.”

“It’s been the first flashpoint in what promises to be a politically bloody primary — one that has drawn responses from foot soldiers in the Obama and Clinton wings of the party — as Democrats begin to focus on who has the best chance to deny President Trump a second term in the Oval Office.”

What do the suburbs want?https://t.co/YSD8n0iE7D

“His meeting with Barack Obama went over schedule. He and Beto O’Rourke have spoken. Not long ago, he thrilled 300 well-heeled political donors hungry to win in 2020. But no one seems to know, except for Andrew Gillum, if he’s actually thinking about running for president,” BuzzFeed News reports.

“The door is open for Gillum to explore a run for the presidency, strategists familiar with the rigors of organizing presidential campaigns said. Gillum has not ruled it out. But according to interviews with nearly a dozen friends, former aides, or associates for this story, he is on his own schedule. He intends to do what’s most effective for Democrats to beat President Donald Trump in 2020 and is said to be unfazed by the people pushing him to run for the Democratic nomination.”