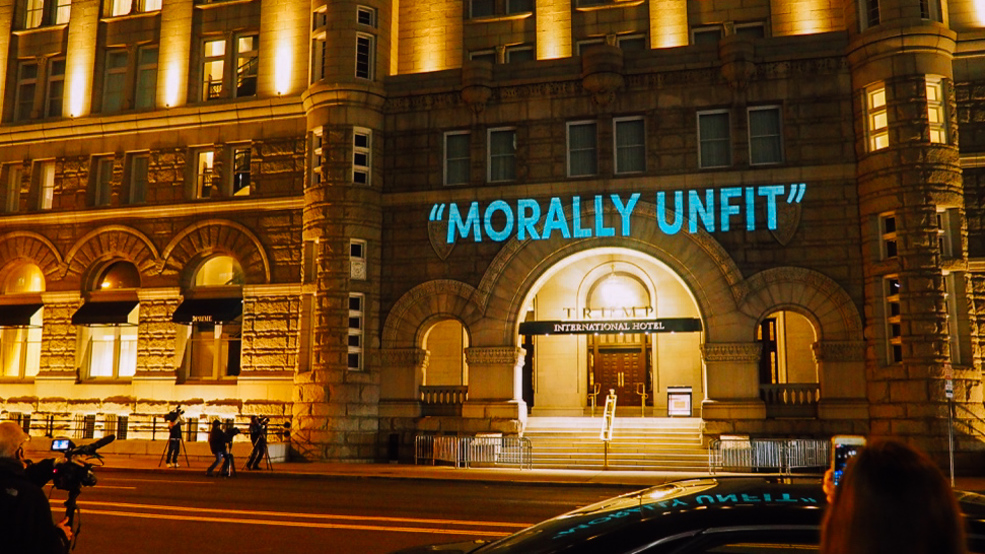 “When it came out this year that President Trump’s inaugural committee raised and spent unprecedented amounts, people wondered where all that money went,” ProPublica reports.

“It turns out one beneficiary was Trump himself.”

“The inauguration paid the Trump Organization for rooms, meals and event space at the company’s Washington hotel… During the planning, Ivanka Trump, the president-elect’s eldest daughter and a senior executive with the Trump Organization, was involved in negotiating the price the hotel charged the 58th Presidential Inaugural Committee for venue rentals.”

President Trump on Friday tweeted that he has named Mick Mulvaney as acting White House chief of staff. Mulvaney serves as director of the Office of Management and Budget and the Consumer Financial Protection Bureau already.  So the question is whether he will be leaving those jobs in favor of an Acting role?  Or will be doing all three?  And if he is doing all three, even in an acting basis, that really means that there is no Chief of Staff.  This is just a cover.

Further, I presume the designation of “Acting” means Trump is still in search of a permanent Chief of Staff.   To that end, former Gov. Chris Christie told the New York Times that he told President Trump he doesn’t want to be considered to replace John Kelly as White House chief of staff.  Said Christie: “It’s an honor to have the president consider me as he looks to choose a new White House chief-of-staff. However, I’ve told the president that now is not the right time for me or my family to undertake this serious assignment. As a result, I have asked not to be considered for this post.”

President Trump’s advisers are pushing him to consider Johnny DeStefano, a young, lesser known, but well-liked aide to replace John Kelly as chief of staff when he exits at the end of the year, according to the Los Angeles Times.

According to two people familiar with the matter who spoke to the Times, several of Trump’s closest advisers think DeStefano is a good choice. The 39-year-old previously served as an aide to former House Speaker John Boehner and has been working as Trump’s director of personnel. DeStefano was also heavily involved in election efforts during the midterms, while juggling overseeing the Office of Public Liaison, according to the Times.

It’s gonna be Jared or Bossie.

Millions of Americans are blindly devoted to Trump, their Dear Leader. What will it take for them to snap out of it? https://t.co/jv852W3aTm pic.twitter.com/64pQSMGCgi

Outgoing Wisconsin Gov. Scott Walker (R) “signed lame-duck legislation Friday that will scale back the authority of his Democratic successor — approving the entire legislation after saying he was inclined to veto parts of it,” the Milwaukee Journal Sentinel reports.

“The move came a day after Walker announced a $28 million incentive package for Kimberly-Clark Corp. using powers the legislation strips from incoming Democratic Gov. Tony Evers. If Walker had signed the legislation earlier, he wouldn’t have been able to cut the deal with Kimberly-Clark without permission from lawmakers.”

I took a detailed look at the Republican Party's relationship with black voters now, compared to the Bush years. With some thoughts from @DrTedJ, @leedrutman and @theseventhstate. https://t.co/NSWBd7G2y6

A new CNN poll finds Joe Biden leading the Democratic presidential field with 30%, followed by Bernie Sanders at 14%, Beto O’Rourke at 9% and Cory Booker at 5%.  They are followed by John Kerry at 4%, Kamala Harris at 4% and Elizabeth Warren at 3%.

The steady erection of a system of minority rule that Republicans are implementing is not as dramatic as a populist putsch.

But it’s actually happening before our eyes, writes @mattyglesias. https://t.co/y8IkDHgSYZ

Lawfare: “The Mueller investigation has clearly produced public records that confirm pieces of the dossier. And even where the details are not exact, the general thrust of Steele’s reporting seems credible in light of what we now know about extensive contacts between numerous individuals associated with the Trump campaign and Russian government officials.”

“However, there is also a good deal in the dossier that has not been corroborated in the official record and perhaps never will be—whether because it’s untrue, unimportant or too sensitive. As a raw intelligence document, the Steele dossier, we believe, holds up well so far. But surely there is more to come from Mueller’s team. We will return to it as the public record develops.”

If you want Medicare for all, you'd better prepare for a long and bloody fight: https://t.co/pQDIgfr5h1

First Read: “Any one of these investigations or inquiries would be enough to create a crisis for a presidency. But for Trump, there are at least six of them, and we’re not counting all of the probes into cabinet and administration officials.”

“But at some point, does the weight of these different investigations and scandals become too much?”

North Carolina House candidate Mark Harris personally directed the hiring of a campaign aide who is now at the center of an investigation of election fraud, according to the Washington Post.

Harris sought out the local strategist, Leslie McCrae Dowless, after narrowly losing his 2016 primary to Rep. Robert Pittenger (R-NC), per the Post. Harris was gearing up for a rematch, and Dowless had helped a third candidate in that race achieve lopsided results in early voting — numbers that Dowless replicated for Harris’s campaign in both the primary and general election in 2018. How he got those numbers is now under investigation, with multiple people saying Dowless illegally took unsealed ballots from voters and alleging that he didn’t send in ballots from Democratic voters.

At this point, Harris should be disqualified from the election and the House should just seat the Democrat McCready.

Yesterday, @DailyKos launched our initial 2020 House target list to help Democrats expand their new majority. Today, @dwbeard explains why we chose each of the seats we did https://t.co/0Jln71dVcg pic.twitter.com/d4kCgiofQS

Michael Cohen told ABC News that Donald Trump directed him to arrange hush-money payments with two women because then-candidate Trump “was very concerned about how this would affect the election” if their allegations of affairs became public.

Said Cohen: “I knew what I was doing was wrong. I stood up before the world and I accepted the responsibility for my actions.”

When asked if the president also knew it was wrong to make the payments, Cohen replied: “Of course,” adding that the purpose was to “help him and his campaign.”

How A Benefit For The Working Poor Was Turned Against Them https://t.co/qaKIhgXEIn via @TPM

Daily Beast: “Shortly after the 2016 presidential election, Donald Trump’s son-in-law Jared Kushner was handed a task considered critical to the president’s operations. In addition to serving as a senior adviser in the White House, he would also be playing the role of the main conduit between Trump and his friend David Pecker, the National Enquirer publisher and chief executive of AMI, which prosecutors said on Wednesday admitted to making a $150,000 hush-money payment ‘in concert with’ the Trump campaign.”

“During the early months of the Trump era, Kushner performed the task admirably, discussing with Pecker various issues over the phone, including everything from international relations to media gossip… Pecker, for his part, bragged to people that he was speaking to the president’s son-in-law and, more generally, about the level of access he had to the upper echelons of the West Wing.”

What unites Donald Trump and his ideological cousins around the world is a desire to roll back the feminist gains of the past several decades, argues @PeterBeinart https://t.co/9PAaImzdid

Susan Glasser: “In other words, the criminality of key figures in the President’s inner circle is now established, by their own admissions, as they start to implicate the President himself. And this is even before Mueller issues findings or criminal charges related to the central subject of his inquiry into whether Trump or his campaign colluded with the Russians in 2016. Additional damning evidence against Trump is increasingly likely to emerge from outside of the Mueller investigation, as in the case of Cohen, or as a consequence of aggressive investigations and oversight by the new Democratic House. For example, on Thursday, the de-facto incoming Speaker of the House, Nancy Pelosi, said that the Ways and Means Committee will use its subpoena powers to demand Trump’s tax returns, which, given the extensive reporting in the Times about his family’s decades-long tax dodges, could produce an untold wealth of damaging information.”

“Largely overlooked in the daily flood of Trump-era news, a week ago, his former Secretary of State, Rex Tillerson, said in an interview that Trump had repeatedly pressed him to violate the law… The coverage of Tillerson’s interview with the journalist Bob Schieffer focussed more on Trump’s outraged response than on the underlying revelation… But Tillerson’s allegation was more than just another bout of Trump-era name-calling between a former Secretary of State who once called his boss a “fucking moron” and the President who fired him by tweet. Imagine Tillerson before Congress come January, testifying under oath and live on television, about which laws Trump told him to break.”

Elizabeth Warren’s Accountable Capitalism Act now has House cosponsors include the head of the Progressive Causes and one of the top leaders in the next generation of House Democrats. https://t.co/ApUC9HhjcG

George Packer: “The corruption I mean has less to do with individual perfidy than institutional depravity. It isn’t an occasional failure to uphold norms, but a consistent repudiation of them. It isn’t about dirty money so much as the pursuit and abuse of power—power as an end in itself, justifying almost any means. Political corruption usually trails financial scandals in its wake—the foam is scummy with self-dealing—but it’s far more dangerous than graft. There are legal remedies for Duncan Hunter, the defeated representative from California, who will stand trial next year for using campaign funds to pay for family luxuries. But there’s no obvious remedy for what the state legislatures of Wisconsin and Michigan, following the example of North Carolina in 2016, are now doing.”