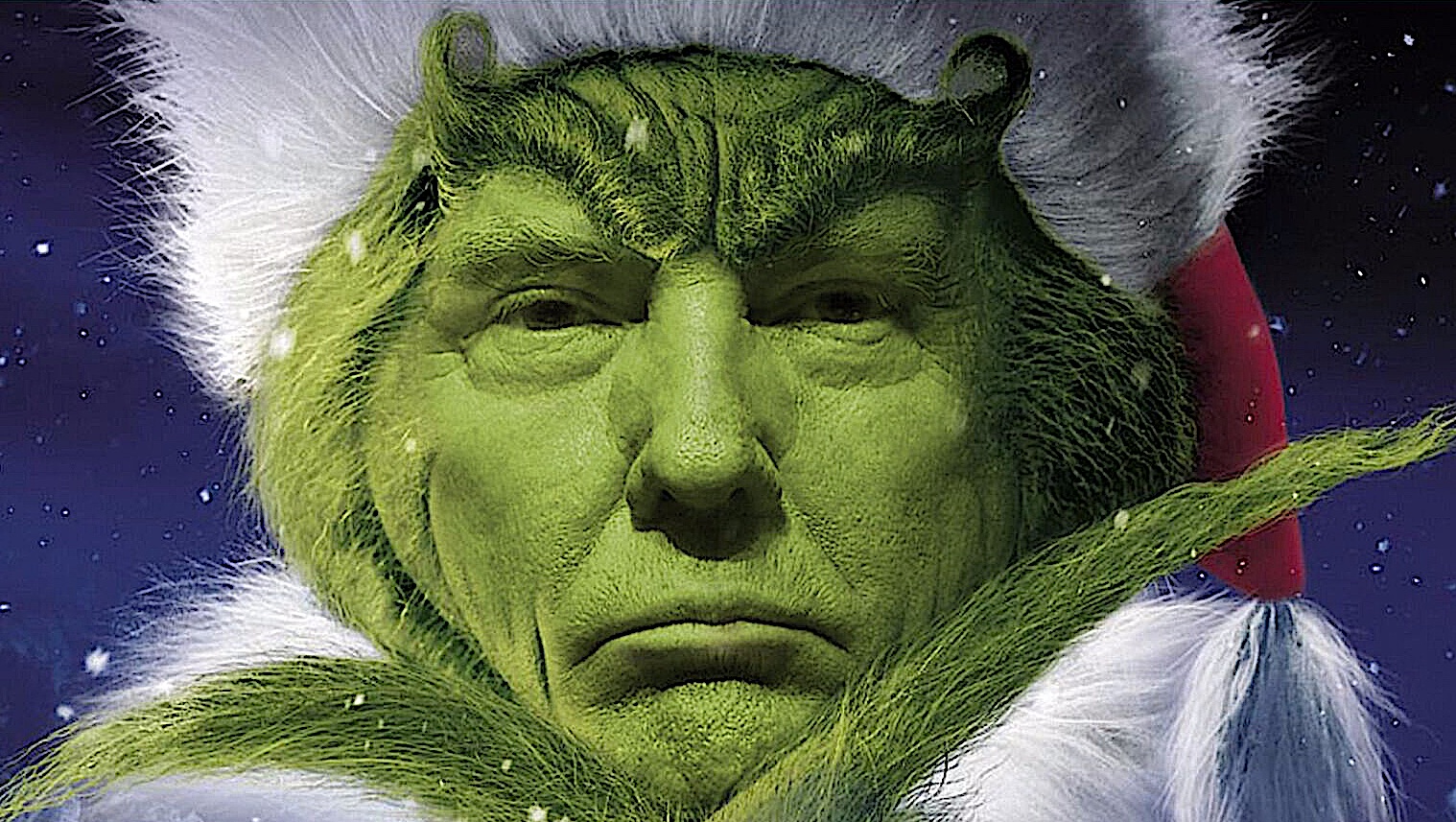 BRIBERY AND EXTORTION BEING INVESTIGATED IN TRUMP’S INAUGURAL COMMITTEE.  “Federal prosecutors in Manhattan are investigating whether President Trump’s 2017 inaugural committee misspent some of the record $107 million it raised from donations,” the Wall Street Journal reports.

The Journal, citing people familiar with the matter, says the investigation arose in part from the slew of materials seized in April raids on Trump’s former personal lawyer, Michael Cohen, by federal prosecutors.

The criminal probe is also looking into whether some of the committee’s top spenders traded money for access to the incoming Trump administration, as well as “policy concessions or to influence official administration positions.”

Yet another criminal investigation for Trump https://t.co/123w3EXaoL

Jonathan Chait: “Trump’s inauguration looked fishy from before it even took place.”

TRUMP WAS IN THE ROOM.  Donald Trump was the third person in the room in August 2015 when his lawyer Michael Cohen and National Enquirer publisher David Pecker discussed ways Pecker could help counter negative stories about Trump’s relationships with women, NBC News has confirmed.

Trump was first identified as attending the meeting by the Wall Street Journal.

“Whether Trump’s actions violated the law is an open question. His tweets were meant to argue that he didn’t specifically direct his former longtime personal attorney Cohen to do anything illegal, even if he did direct the payments.”

“But that valid legal question aside, it’s worth emphasizing just how horrendous of a coverup this whole episode has proved to be. Regardless of legal culpability, Trump and his team have spent the last 11 months engaging in a very public and irreconcilable effort to obscure all of this. And as the days pass, their statements look worse and worse.”

THE BUTINA GUILTY PLEA.  “A Russian gun rights activist pleaded guilty Thursday to conspiring with a senior Russian official to infiltrate the conservative movement in the United States as an agent for the Kremlin from 2015 until her arrest in July,” the Washington Post reports.

“Maria Butina, 30, became the first Russian national convicted of seeking to influence U.S. policy in the run-up and through the 2016 election as a foreign agent, agreeing to cooperate in a plea deal with U.S. investigators in exchange for less prison time.”

HE WENT TO JARED.  “Having run through his first choices for his chief of staff vacancy without any luck, President Trump is considering his own son-in-law for the job,” the HuffPost reports.  “Jared Kushner, the husband of Trump’s daughter Ivanka and already an official White House adviser, met with Trump Wednesday about the job.”

OR DOES THE BOSS WANT BOSSIE?  Gabriel Sherman: “Trump is scheduled to interview Citizens United president Dave Bossie at the White House on Friday. (Bossie declined to comment.) Bossie, who served as deputy campaign manager of Trump’s 2016 campaign, is known as a political street fighter and is a close confidant of Corey Lewandowski and Steve Bannon. With House Democrats poised to launch investigations of Trump in January, Bossie’s experience in political trench warfare is viewed by Trump as a plus.”  Said one Republican: “Trump is all over how Bossie knows investigations.”

The mainstay Republicans have already gotten what they’ve wanted from this president – what can he offer them now?https://t.co/dwKmkIX3Ii

ELIZABETH AND BERNIE MEET.  Sen. Elizabeth Warren (D-MA) and Sen. Bernie Sanders (I-VT) “met Wednesday night at her condominium in Washington to discuss their political intentions but did not reach any accord about coordinating their dueling presidential ambitions,” the New York Times reports.

“Only the two senators were present and they stated what has become abundantly clear: that they are both seriously considering seeking the Democratic nomination in 2020. But neither Ms. Warren nor Mr. Sanders sought support from the other or tried to dissuade the other from running.”

“The U.S. ran the largest deficit in six years in fiscal 2018, the first full year of Donald Trump’s presidency when his Republican party enacted a tax-cut package and raised federal spending for the military and other priorities. The measures have added to the growing federal deficit, which is forecast to push past $1 trillion by 2020 when the U.S. next holds presidential elections.”

How Nancy Pelosi put down a rebellion and allowed everyone to win: https://t.co/O7RkHFIjpj

Who's the master of the art of the deal here?

SENATE REBUKES TRUMP AND THE SAUDIS.  The U.S. Senate rebuked Saudi Arabia and President Trump over the death of journalist Jamal Khashoggi with a vote to end U.S. military involvement in Yemen, the Washington Post reports.

Thursday’s action is largely symbolic, as the resolution is dead on arrival in the House, where lawmakers blocked such a measure from being voted on this year.

TRUMP IS WORRIED ABOUT IMPEACHMENT.  He should also worry about Indictment.   “Despite President Trump’s public declaration that he isn’t concerned about impeachment, he has told people close to him in recent days that he is alarmed by the prospect,” NBC News reports.

“Trump’s fear about the possibility has escalated as the consequences of federal investigations involving his associates and Democratic control of the House sink in, the sources said, and his allies believe maintaining the support of establishment Republicans he bucked to win election is now critical to saving his presidency.”

CBD is trendy, but now it’s really about to be everywhere, thanks in part to Congress https://t.co/1xwFjfYZUi

MUELLER IS ALSO LOOKING AT MIDDLE EASTERN COLLUSION.  “Over the past year, the indictments, convictions, and guilty pleas have largely been connected, in one way or another, to Russia. But now, Special Counsel Robert Mueller’s office is preparing to reveal to the public a different side of his investigation. In court filings that are set to drop in early 2019, prosecutors will begin to unveil Middle Eastern countries’ attempts to influence American politics,” three sources familiar with this side of the probe told the Daily Beast.

“In other words, the so-called ‘Russia investigation’ is set to go global.”

“While one part of the Mueller team has indicted Russian spies and troll-masters, another cadre has been spending its time focusing on how Middle Eastern countries pushed cash to Washington politicos in an attempt to sway policy under President Trump’s  administration.”

SNAP OUT OF IT.  First Read: “If you turn on your TV news, scroll through your newspapers and thumb through your tweets, this might seem like just another normal week in the Trump Era. The president’s former lawyer/fixer was sentenced to three years in jail; Trump got rid of his chief of staff but has no replacement lined up; and the government appears hurtling toward a possible partial government shutdown. Boring. Ho-hum. Same old, same old.”

“And it’s a HUGE deal that the president of the United States has been identified as Individual-1 in prosecutors’ legal filings.”

“We get the temptation of how these stories can become numbing – to the public, to the journalists covering them, and to Washington at large. But remember, any of these stories this week would be a five-alarm political fire for any other presidency.”

.@dylanlscott and I read the 8 Democratic plans for universal health care. Here’s what we learned. https://t.co/jJPcob0JKo

RANKED CHOICE SUIT IN MAINE THROWN OUT.  “A federal judge is tossing a lawsuit by a Republican incumbent congressman from Maine who lost the nation’s first congressional election held by a candidate-ranking system,” the AP reports.

BAI DOES HAVE A POINT.  I HIGHLIGHT IT FOR YOU.  Matt Bai: “What that televised confrontation really showed is that Trump understands exactly what keeps his listing presidency afloat, even if you don’t.”

“First of all, Trump knows that immigration — legal, illegal, extraterrestrial, whatever — is the single resonant issue of his political life, and has been since he rode down that escalator and straight into our nightmares. He may run afoul of Republicans and independents when it comes to Russia or Saudi Arabia or trade, but he can always come home again to the issue that got him here in the first place.”

“Trump could have had the Secret Service handcuff Pelosi and Schumer right there and force-fed them his remaining inventory of Trump steaks, and as long as he said he was doing it to keep undocumented, nonwhite people out of the country, his core voters would applaud.”

“And Trump the entertainer understands, in a way his critics still don’t, that most Americans are bone-tired of all the phony stagecraft. What we in Washington consider dignified behavior worthy of the office strikes an awful lot of voters as something else — namely, a condescending put-on.”

Young Evangelicals are leaving the church. Can the GOP survive? https://t.co/IY7fvRlcm7 pic.twitter.com/qPT2J1wqp6

TRUMP THE GRINCH.  “President Trump has canceled the White House holiday party for the media, making the decades-old tradition a victim of his increasingly contentious relationship with major news organizations,” Fox News reports.

“The annual Christmas-season gathering was a significant perk for those covering the White House, as well as other Washington reporters, anchors and commentators, and New York media executives would regularly fly in for the occasion.”

THE GOP HAS NO PLAN.  Politico: “The House is now poised to leave town Thursday for five days without offering a clue to how it would avoid a crippling funding lapse for roughly a dozen agencies.”

“Majority Leader Kevin McCarthy (R-CA) has cautioned members that they may need to come back Monday and Tuesday for a last-minute session on funding bills. But even Rep. Rodney Frelinghuysen of New Jersey, the House GOP‘s spending chief, said Wednesday he was in the dark.”

For a detailed look at the behind the scenes action, read below: