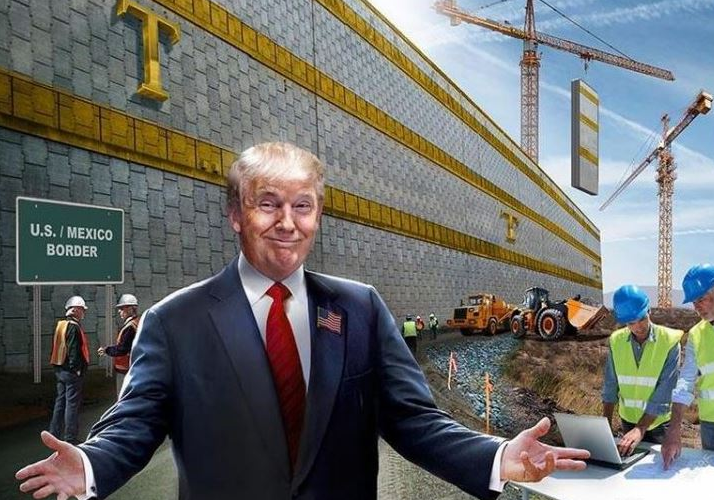 Donald Trump loves his Wall.   The metaphorical wall that exists only in his mind.  As Ezra Klein points out, he actually doesn’t want to build it.  He just wants to fight about it, to keep his racist base riled up.  But that begins to become a problem for him on two levels, as we will see below.  But first, Klein:

The $5 billion in funding Trump is demanding isn’t actually enough to build the wall. Estimates of the total cost range from about $20 billion to $70 billion. Securing funding at either level would require a much bigger deal, with much more significant concessions from Trump.

But Trump isn’t offering a deal, and he isn’t constructing the kind of process where anyone might offer him a deal. Instead, he’s looking for a photo op. He’s looking for a clip of himself he can see played, and praised, on Fox & Friends.

He just wants the fight.   Probably because he sees polling like what a new
Democracy Corps survey has found.  The issue of Immigration, and specifically the conservative framing that Democrats are for open borders and sanctuary cities, works really well in motivating the racist Republican base.   It was the top reason, by a landslide, among the base as a reason to vote against Democrats this past election.   Trump’s divisive rhetoric and hostility to immigrants pushed up Trump’s “strong approval” with all types of Republicans.

But, the intense focus on these immigration issues also made the party smaller, pushing away key segments of the Republican Party, either into the arms of the Democrats or onto their couches at home.

Democracy Corps found that nationally, a noticeable 12 percent of Conservative Catholics and Secular Conservatives did not vote. The Moderates are one-quarter of the GOP and just 69 percent of them voted Republican, 12 percent defected to the Democrats, and 19 percent stayed home.  The “persuadable GOP” — a group of targetable Republicans developed by Democracy Corps— were 40 percent larger than the Moderates and may have played an even bigger role in the election: one-quarter voted for Democrats and 14 percent stayed home.

Those Republicans who considered voting for the Democrat said they were motivated “to make the economy work for everyone, not just the rich and corporations,” (48 percent), to “send a message that we need decency and honesty in government,” (48 percent), and to have a “check on Donald Trump” (38 percent).

So the focus on the wall has one immense problem for Trump: it has made his party smaller.   The second problem is that, with all this intense focus on the wall, the wall that Trump doesn’t care enough about to actually make deals to build, the longer the wall doesn’t get built, the more Donald looks like a failure.  How long is the patience of the Trump supporter?

9 comments on “The Wall Fight Shrinks the GOP”