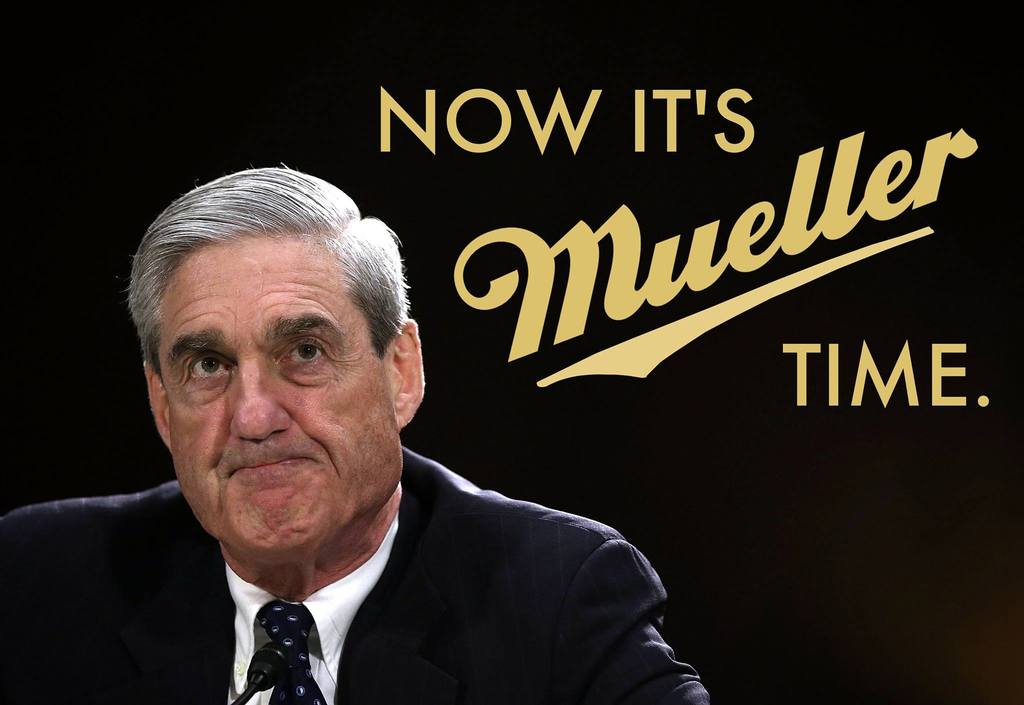 Even though this coming week will be dominated with coverage of the funeral of former President George H.W. Bush, Special Counsel Robert Mueller will have a busy week.  He will be releasing a Sentencing Memo on Michael Flynn on Tuesday.   A sentencing Memo from both Mueller and the Southern District of New York on Michael Cohen is due on Wednesday.  Both of these memos could be incredibly revealing.   Then Mueller will release a memo outlining Manafort’s lies on Friday.  And there could be indictments accompanying each memo.

Meanwhile, Rep. Jerry Nadler (D-NY), the incoming chairman of the House Judiciary Committee, told NBC News that new revelations from Michael Cohen amount to proof that Russia had “leverage” over Donald Trump during the 2016 presidential campaign.

He added: “One question we have now is, does the Kremlin still have a hold over him because of other lies that they know about?”

Rep. Adam Schiff (D-CA), the incoming chairman of the House Intelligence Committee, told ABC News the same thing: “There is now testimony, there is now a witness, who confirms that in the same way Michael Flynn was compromised, that the president and his business are compromised.”

Republicans in North Carolina appear to have engaged in the biggest voter fraud operation I've ever heard of. And there's absolutely nothing the state's Voter ID law would have done to prevent it. https://t.co/p1nOJ0cQne

President Trump said that he “intends to formally notify Canada and Mexico of his intention to withdraw from the nearly 25-year-old North American Free Trade Agreement in six months. The move would put pressure on Congress to approve his new trade deal with the two U.S. neighbors,” Politico reports.

Said Trump: “I’ll be terminating it within a relatively short period of time. We get rid of NAFTA. It’s been a disaster for the United States.”

Joshua Alvarez says Dems should just vote to ratify this updated NAFTA agreement, because that is what it is: “The USMCA, as has been widely reported, is almost exactly the same as NAFTA. Some notable exceptions involve automobile manufacturing, access to dairy markets in Canada and the U.S., and modernized intellectual property protections for internet and tech-based innovations.

How the temporary tariff ceasefire and the USMCA came about share similar story arcs: Trump digs hole; Trump refills hole (mostly); Trump declares beautiful victory for filling very big hole that nobody knew would be so hard to fill.  […]

[It] seems to me that the dumbest thing House Democrats could do is the thing they appear to be thinking about doing: begin their term in the majority by staging some melodramatic opposition to the USMCA on the grounds that it doesn’t do enough for American workers. It would be smarter to quickly approve it, insist on calling it “an updated NAFTA,” and rely on that most reliable of things: Trump’s ability to harm himself in spectacularly public ways and bury this “victory” beneath the headlines. In any case, it will be up to the Democrats’ 2020 candidate, not House members, to lay out what a truly worker-friendly trade agreement would look like.”

The GOP has changed dramatically since it nominated Bush for the presidency in 1988 — a fact reflected in the late ex-president’s strained relationship with the GOP’s new standard-bearer, President Trump. https://t.co/aH4tNht8ij

“Congressional negotiators and White House officials are discussing a one-week budget bill that would delay a partial government shutdown while Washington prepares for the state funeral of former president George H.W. Bush, according to several people briefed on the talks,” the Washington Post reports.

“A final decision has not been made but could come as soon as Sunday, when President Trump returns to Washington. It’s also possible that lawmakers could pursue a 10-day or two-week spending bill, depending upon how talks proceed.”

Stan Collender: “Bush’s death and the events that have been scheduled this week to commemorate his life almost certainly will be a cover story rather than the actual reason this Friday’s shutdown showdown may be delayed.”

“The real reason will be that neither the White House nor Senate Republicans have the votes they need. If they did, the debate and vote would have taken place this week ‘in President George H.W. Bush’s memory and honor.’”

“This is one of the most basic truisms of legislating in Washington: You stop talking and take the vote as soon as possible when you’ve got enough to win. When you don’t, you figure out a way to delay.”

Politico: Trump said he would back a two-week delay of a government shutdown.

Opinion: Democrats should consider what would happen if Trump doesn’t run in 2020 https://t.co/RG0ZHCSPwD

“The United States and China called a truce in their trade war on Saturday after President Trump agreed to hold off on new tariffs and President Xi Jinping pledged to increase Chinese purchases of American products,” the New York Times reports.

“The compromise, struck over a steak dinner at the Group of 20 meeting here and announced in a White House statement, was less a breakthrough than a breakdown averted. The two leaders remain far apart on basic issues of market access and trade policy, and there was no sign that either planned to back down on those.”

Washington Post: “The temporary cease-fire in the U.S.-China trade war left the toughest issues to future bargaining sessions, which will attempt to succeed where earlier efforts failed — and under an ambitious 90-day deadline.”

The most prophetic 2 minutes and 44 seconds in American history is:@HillaryClinton warning us about @realDonaldTrump’s ties to Russia…

“Michael Avenatti’s cable TV bookings have dwindled. He was uninvited from one prominent Democratic event and skipped out on another. Now his highest-profile client is bringing new allegations against him,” Politico reports.

“In just a matter of weeks, Avenatti’s fortunes have taken a nosedive, rapidly downshifting from 2020 presidential prospect to political pariah.”

The Fight for 15 movement to raise minimum wages directly led to a collective $68 billion raise for 22 million low-wage workers in both the public and private sectors https://t.co/YQ0ftYO6L3

“Saudi Crown Prince Mohammed bin Salman sent at least 11 messages to his closest adviser, who oversaw the team that killed journalist Jamal Khashoggi, in the hours before and after the journalist’s death in October, according to a highly classified CIA assessment,” the Wall Street Journal reports.

“The Saudi leader also in August 2017 had told associates that if his efforts to persuade Mr. Khashoggi to return to Saudi Arabia weren’t successful, ‘we could possibly lure him outside Saudi Arabia and make arrangements.’”

Politico: World leaders shy away from confrontation over Khashoggi killing.

Total GOP Control in Washington Is About to End. What Did They Get Out of It? https://t.co/29PNmgMopA

“Britain’s opposition Labour Party is ramping up the pressure on Prime Minister Theresa May, saying it will call a no-confidence vote in the Conservative leader if Parliament rejects her Brexit deal on Dec. 11,” the AP reports.

“May is battling to persuade skeptical British lawmakers to back the deal agreed between her government and the European Union last month. Rejecting it would leave the U.K. facing a messy, economically damaging ‘no-deal’ Brexit on March 29.”

Warner: "We've made a number of referrals" pic.twitter.com/J8Cxh4EPbL

Sen. Mark Warner (D-VA), the top Democrat on the Senate Intelligence Committee, told CBS News that his committee has made “a number of referrals” to special counsel Robert Mueller’s office for prosecution, and vowed to do the same for anyone who lies to congressional investigators probing Russian interference in the 2016 election.

Said Warner: “If you lie to Congress, we’re going to go after you. We’re going to make sure that gets referred.”

“Israeli police on Sunday recommended indicting Israeli Prime Minister Benjamin Netanyahu on charges of bribery and corruption in a third case — this time on suspicion that the leader eased business regulations for the country’s largest telecommunications company in exchange for favorable coverage for him and his wife on a popular news website owned by the firm,” the Washington Post reports.

Assured that he can release transcript, Comey agrees to closed-door testimony https://t.co/POBFZWXLdN pic.twitter.com/irwLmYEYTM

“Aides to the former president and the man himself say O’Rourke’s campaign against Sen. Ted Cruz (R-TX) gave them flashbacks to Obama’s precocious political rise and has positioned the young white congressman as an early if unlikely heir to the first black president’s ‘hope and change’ mantle.”

“Obama said as much at an event in Chicago last week and some of his former political lieutenants have been publicly encouraging O’Rourke to consider a 2020 presidential bid, while privately counseling him on what to expect should he jump in.”

I am so incredibly excited about this. The very first bill of @NancyPelosi's Democratic House will be a bold package of proposals to save American democracy. h/t @OsitaNwanevu https://t.co/5re6vT5FBq

Sen. Kamala Harris (D-CA) told NBC News that she will make a decision on running for president over the holidays.  Said Harris: “It will ultimately be a family decision… And over the holiday, I will make that decision with my family.”