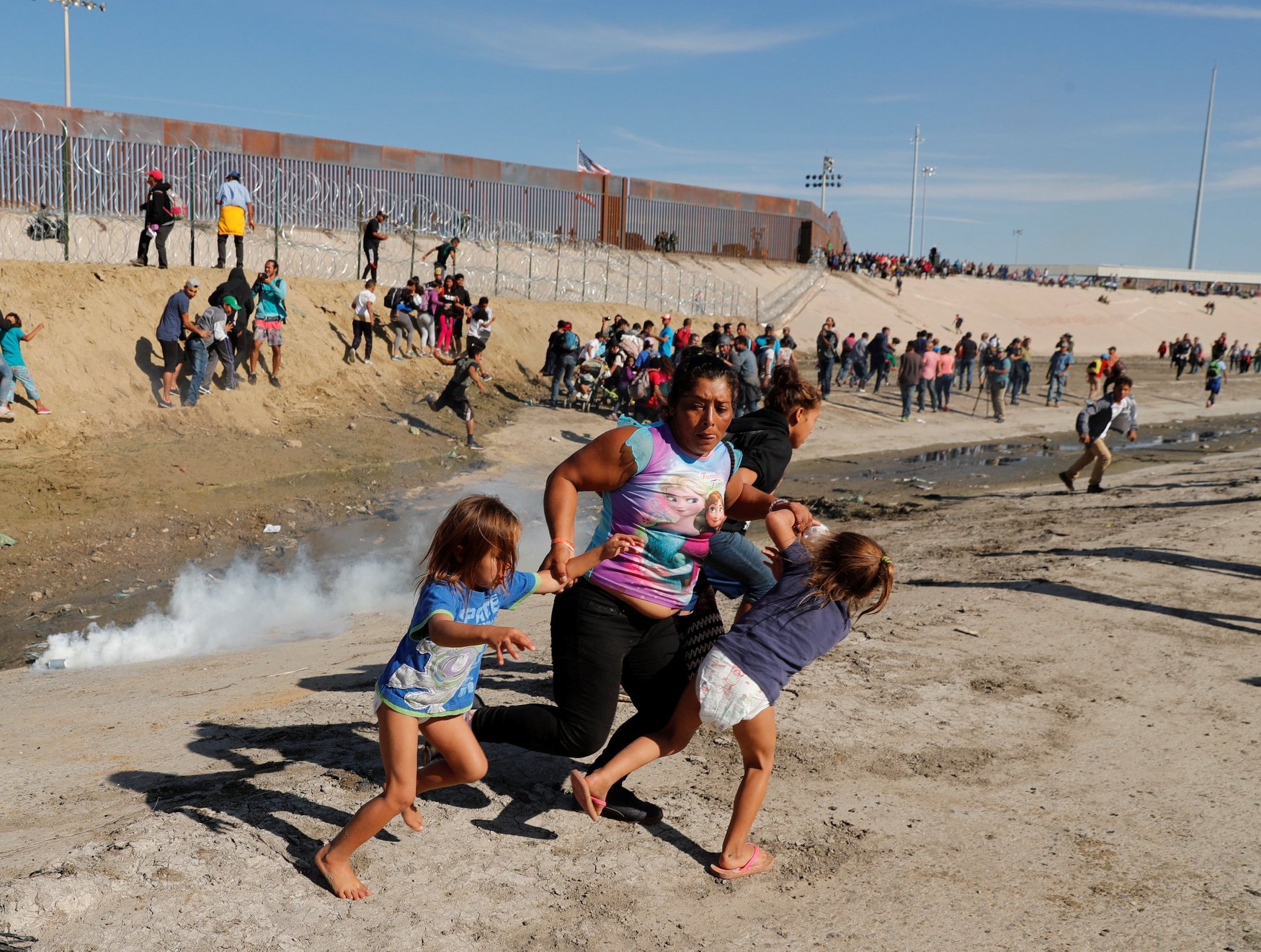 “Migrants approaching the U.S. border from Mexico were enveloped with tear gas Sunday after a few tried to breach the fence separating the two countries,” Politico reports.  “U.S. agents shot the gas… Children were screaming and coughing in the mayhem.”

US suspends crossings at key port of entry as some migrants approach fence https://t.co/7NBx2iGleG pic.twitter.com/Fj1Q78WHBr

New York Times: “A peaceful march by Central American migrants waiting at the southwestern United States border veered out of control on Sunday afternoon, as hundreds of people tried to evade a Mexican police blockade and run toward a giant border crossing into California.”

Mexico’s incoming interior minister said on Saturday there was “no agreement of any type between the future government of Mexico and the United States” that will require asylum seekers to wait in Mexico while their claims move through U.S. courts, Reuters reports.

Washington Post: “Chief of Staff John Kelly has told others about watching television with Trump and asking the president how much the chairman of the Joint Chiefs of Staff earns. Trump guessed $5 million, according to people who were told the story by Kelly, startling the chief of staff. Kelly responded that he made less than $200,000. The president suggested he get a large raise and noted the number of stars on his uniform.”

"She didn’t have to convince either moderates or progressives that she was their ideal choice. She only had to convince each group of would-be rebels that the other was worse." @PeterBeinart on Nancy Pelosi's likely win: https://t.co/MGBzyH655E

Said Davids: “Kansans didn’t elect me to go to Washington to play political games and take symbolic protest votes. They elected me to get things done. The best way to move forward as we face unprecedented threats to our healthcare access and to our democracy is to unite behind the person who is clearly going to become the next speaker, and who, whatever differences we may have, will stand up to those threats.”

“Davids was one of several incoming Democratic lawmakers who had remained undecided or expressed skepticism at reelecting Pelosi as the Democratic caucus’ longtime leader following an election many argued reflected a desire for change.”

“Another Democrat who has threatened to vote on the House floor against Nancy Pelosi for speaker seemed to soften that stance on Sunday, giving the California Democrat the appearance of momentum before a key test vote on Wednesday,” Politico reports.

“Rep. Stephen Lynch (D-MA), one of 16 lawmakers or members-elect who had signed a letter promising to vote against Pelosi on the floor, said on Sunday he would back her over a Republican during the critical Jan. 3 vote.”

Sen. Cindy Hyde-Smith (R-MS) “once promoted a measure that praised a Confederate soldier’s effort to ‘defend his homeland’ and pushed a revisionist view of the Civil War,” CNN reports.

“Hyde-Smith, a Republican, faces Mike Espy, a Democratic former congressman and agriculture secretary, in Tuesday’s runoff in Mississippi — the final Senate race to be decided in 2018. The measure… is the latest in a series of issues that have surfaced during her campaign, many of which have evoked Mississippi’s dark history of racism and slavery.”

NEW – “Going out there and being able to articulate a progressive vision and not being able to beat Trump is not good enough,” says Jeff Weaver, Sanders’ 2016 campaign manager and eager for him to run now, and
thinks he might be the one to beat Trump.https://t.co/tbwKjxJ08B

I’m not one of them.

NBC News: “Both parties are still sifting through mountains of data and it will take time to determine how many converts Democrats won versus how much their base’s enthusiasm carried the day.”

“But strategists, pollsters, and nonpartisan analysts who spoke to NBC News say the early data points to a serious problem for the GOP with voters they once counted on, especially suburban woman, even as they’ve made gains with ex-Democrats in rural areas and small towns.”

Getting the E.U.’s approval for a deal was a major hurdle for the U.K., but it is by no means the final or biggest one https://t.co/Ad2Cybflgj

“More than four decades after Britain tied itself to its Continental neighbors, Prime Minister Theresa May obtained the approval of the other 27 European Union members on a formal divorce pact from the bloc, Donald Tusk, the president of the European Council, said on Sunday,” the New York Times reports.

“It is a consequential step intended to take the country on a new, if unclear, path.”

“The journey has been long and tortuous for both sides, and the drama is hardly over. Mrs. May must still get approval for the deal — a dense, legally binding divorce settlement and a set of political promises for Britain’s future relationship with the bloc — from an outspokenly unhappy British Parliament.”

Bloomberg: “European leaders gave Theresa May her Brexit deal but warned that the U.K. Parliament must vote for the plan as it stands because negotiations will not be reopened if British politicians reject it.”

“President Trump is demanding top advisers craft a plan to reduce the country’s ballooning budget deficits, but the president has flummoxed his own aides by repeatedly seeking new spending while ruling out measures needed to address the country’s unbalanced budget,” the Washington Post reports.

“Trump’s deficit-reduction directive came last month, after the White House reported a large increase in the deficit for the previous 12 months. The announcement unnerved Republicans and investors, helping fuel a big sell-off in the stock market. Two days after the deficit report, Trump floated a surprise demand to his Cabinet secretaries, asking them to identify steep cuts in their agencies.”

“A federal judge on Sunday ruled that George Papadopoulos must report to prison as scheduled on Monday, rejecting a bid from the former Trump campaign adviser to delay the start of his prison sentence while a constitutional challenge to the special counsel investigation remains unresolved,” the Washington Post reports.

The @nytimes has an important story today about how Hungary's near-dictator, Orban, and his cronies are wiping out the free press. https://t.co/Nxh7pjUqry But the Times dodges around the most important lesson in this situation: the combination of telecom and media. 1/

Fresh off her re-election win, Sen. Amy Klobuchar (D-MN) told ABC News that she’s still considering a presidential bid in 2020.  Said Klobuchar :”People are talking to me about this, I think in part because I’ve worked really hard to go not just where it’s comfortable, but where it’s uncomfortable and did well in a number of those places where Donald Trump won. I’m also someone, for those that are exhausted with politics, that likes to get stuff done.”

This suggestion from ⁦@pkcapitol⁩ makes a whole lotta sense. Among other things, the turnover in underpaid positions leads to a constant brain drain on the Hill. https://t.co/BJNZQEv5x5

“President Trump twice raised to the Iraqi prime minister the idea of repaying America for its wars with Iraqi oil, a highly controversial ask that runs afoul of international norms and logic,” Axios reports.

“Trump appears to have finally given up on this idea, but until now it hasn’t been revealed that as president he’s raised the concept twice with Iraq’s prime minister and brought it up separately in the Situation Room with his national security team.”

“Top national security figures from both parties condemned Trump’s idea, calling it outrageous and unworkable — a violation of international law that would fuel the propaganda of America’s foes.”

New York Times: “The Democrats are already laying out lines of inquiry that could quickly lead not just to Mr. Trump and his White House aides, but also to his immediate family. And Republicans returning to Capitol Hill next year may be forced by the changed political climate to take a harder line toward the Trump family.”

“Likely Democratic targets include not only the president’s personal finances and those of the Trump Organization, but also the actions taken by his sons Donald Jr. and Eric and his son-in-law, Jared Kushner, during the 2016 campaign and its aftermath.”

The Guardian: “Parliament has used its legal powers to seize internal Facebook documents in an extraordinary attempt to hold the US social media giant to account after chief executive Mark Zuckerberg repeatedly refused to answer MPs’ questions.”

“The cache of documents is alleged to contain significant revelations about Facebook decisions on data and privacy controls that led to the Cambridge Analytica scandal. It is claimed they include confidential emails between senior executives, and correspondence with Zuckerberg.”

Noting that “all of my friends appear to be running” for president, Sen. Brian Schatz (D-HI) took to Twitter and predicted that a progressive would ultimately win the Democratic Party’s presidential nomination in 2020 but that it would not signify a battle with centrists.

Said Schatz: “The progressive we nominate should also be capable of getting votes from moderates and even Republicans. That wouldn’t make them less progressive, that would make them better.”

He added: “We had a successful formula in 2018 which was to run on policy (mostly healthcare) and against corruption. We should do that again.”