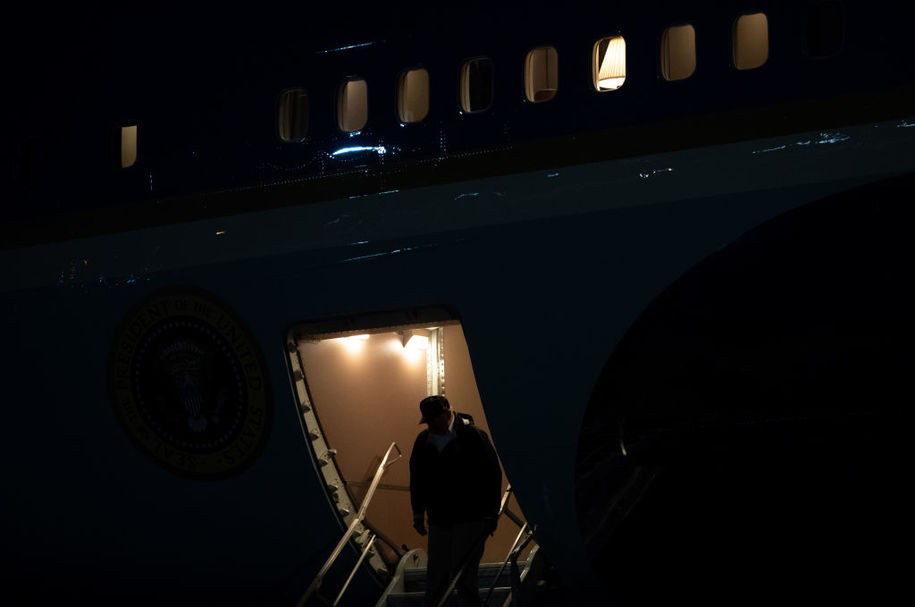 TRUMP GOES PROFANE IN NAME CALLING.  President Trump attacked Rep. Adam Schiff (D-CA), labeling him as “little Adam Schitt” after the congressman suggested the appointment of Acting Attorney General Matthew Whitaker was unconstitutional, The Hill reports.  Trump then revealed himself to be an idiot when he said “yeah, but Mueller wasn’t Senate confirmed either.”   Little Donnie boy, a Special Counsel is not required to be Senate confirmed.  The DOJ has regulations and procedures that lay out when a Special Counsel can be appointed.  But a constitutional officer like the Attorney General must be.  Go back to school little boy.  You failed today’s exam.

OUTGOING REPUBLICANS TRY TO WEAKEN THEIR DEMOCRATIC REPLACEMENTS.  “With their grip on power set to loosen come January, Republicans in several states are considering last-ditch laws that would weaken existing or incoming Democratic governors and advance their own conservative agendas,” PBS reports.

“In Michigan, where the GOP has held the levers of power for nearly eight years, Republican legislators want to water down a minimum wage law they approved before the election so that it would not go to voters and would now be easier to amend.”

“Republicans in neighboring Wisconsin are discussing ways to dilute Democrat Tony Evers’ power before he takes over for GOP Gov. Scott Walker. And in North Carolina, Republicans may try to hash out the requirements of a new voter ID constitutional amendment before they lose their legislative supermajorities and their ability to unilaterally override vetoes by Democratic Gov. Roy Cooper.”

TRUMP LIED ABOUT HIS “RAKING LEAVES” CONVERSATION WITH THE FINNISH PRESIDENT.   The leader of Finland denied that he’d ever told President Trump that the small Nordic nation relies upon “raking” its forests to prevent wildfires — even though Trump promoted the dubious conservation method during a visit to flame-ravaged California over the weekend, Politico reports.

MISSISSIPPI SENATE RUNOFF IS SUDDENLY COMPETITIVE.   “A U.S. Senate runoff that was supposed to provide an easy Republican win has turned into an unexpectedly competitive contest, driving Republicans and Democrats to pour in resources and prompting a planned visit by President Trump to boost his party’s faltering candidate,” the Washington Post reports.

“Republican Sen. Cindy Hyde-Smith stumbled recently when, in praise of a supporter, she spoke of her willingness to sit with him in the front row of a public hanging — words that, in the South, evoked images of lynchings. She has struggled to grapple with the fallout, baffling members of her party and causing even faithful Republicans to consider voting for her opponent, former congressman Mike Espy.”

“That Espy is attempting to become the state’s first black senator since shortly after the Civil War made her remarks all the more glaring.”

GILLUM AND NELSON CONCEDE IN FLORIDA.   “Andrew Gillum conceded Florida’s governor’s race on Saturday as a recount of ballots neared its end, and the Democrat congratulated Republican former Rep. Ron DeSantis on becoming the state’s next governor,” Reuters reports.

Incumbent Sen. Bill Nelson (D-FL) conceded the race to represent Florida in the U.S. Senate to Gov. Rick Scott (R) after a hand recount showed Scott’s victory was final.  “I was not victorious in this race, but I still wish to strongly reaffirm he cause for which we fought: A public office is a public trust,” Nelson said in a video posted to his campaign’s Twitter account.

DEMOCRATS PLOT IMMIGRATION RESPONSE.  Washington Post: “Some Democrats are pushing the idea of a new comprehensive immigration plan akin to bipartisan legislation that foundered five years ago. Others want to focus attention on the narrower goal of granting legal status to undocumented immigrants known as ‘dreamers,’ who have lived in the country illegally since they were children and whose cause is broadly popular with the public.”

“But the boldest, and most controversial, Democratic rebuttal to Trump’s bumper-sticker sloganeering has come from progressive newcomers, most prominently Rep.-elect Alexandria Ocasio-Cortez, who swept to victory behind calls to “abolish ICE” — the Immigration and Customs Enforcement agency, with 20,000 employees — over perceived abuses.”

YEAR OF THE WOMAN, BUT NOT REPUBLICAN KIND. Washington Post: “Just 13 GOP women have won election so far to serve in the next Congress, down from 23 this year. With a half dozen races yet to be resolved, the House GOP — the minority party next year — is all but certain to have the lowest number of women in its ranks since 1994.”

“That drop off came amid a national political climate that saw female voters sharply break from Republicans. Women favored Democrats over Republicans for Congress, 59 percent to 40 percent, according to exit polls.”

“It’s set off an internal debate within the Republican Party about how to address this crisis, both in terms of appealing to female voters and then recruiting and retaining women in Congress.”

The Democratic wins in Michigan might be a blueprint for the party in 2020, writes @isaacdovere https://t.co/I7gRfkGcka

TRUMP THREATENS SHUT DOWN AGAIN.  Please proceed, Governor.   President Trump suggested he was prepared to shut down the federal government next month if Congress fails to give him the money he wants to build a wall along the U.S. border with Mexico, the Washington Post reports.

TRUMP OFFICIAL IN CHARGE OF ENFORCING SAUDI SANCTIONS RESIGNS.   “A top White House official responsible for American policy toward Saudi Arabia resigned on Friday evening, a move that may suggest fractures inside the Trump administration over the response to the brutal killing of the dissident Jamal Khashoggi,” the New York Times reports.

“The official, Kirsten Fontenrose, had pushed for tough measures against the Saudi government, and had been in Riyadh to discuss a raft of sanctions that the American government imposed in recent days against those identified as responsible for the killing.”

Stacey Abrams: "I do indeed intend to run for office again, I'm not sure for what and I am not exactly certain when. I need to take a nap, but once I do, I'm planning to get back into the ring." (via CNN) pic.twitter.com/qK5ypZE3LF

SPEAKER RACE GOES NATIONAL.   Washington Post: “While congressional leadership fights have historically revolved around insular matters such as committee assignments and rules changes, the battle over who will lead the newly empowered House Democrats has exploded into a national political campaign.”

“At stake is not merely the House speakership, a job second in line to the presidency, but who will emerge as the country’s most high-profile counterpoint to President Trump — who will set the strategy for investigating him, who will lead the opposition to his agenda, and who will be the face of the Democratic Party ahead of the 2020 campaign.”

“The country’s biggest unions, arguing that Pelosi is the best equipped to take on Trump, have lobbied Democrats to back her. Top donors have placed calls to lean on undecided members. Celebrities have weighed in as well, and prominent liberal activists have openly discussed fomenting primary challenges in the next campaign against the leaders of the anti-Pelosi opposition.“

FINALLY, BIG LIBERAL DONORS SEE BENEFIT OF FIRING UP THE BASE RATHER THAN GOING TO THE MIDDLE.  New York Times: “As the debate rages among Democrats about how best to position the party to defeat President Trump in 2020, many big donors are signaling early support for expanding and firing up the party’s liberal base rather than backing centrist appeals targeting the Rust Belt.”

“Even though middle-of-the-road Democrats helped propel the party to broad gains in the House in the midterm elections this month, especially in coastal suburbs, influential donors signaled in postelection meetings that their priority would be to back progressive appeals in Sun Belt states.”

ARIZONA AND GEORGIA ARE NEW SWING STATES, REPLACING COLORADO AND OHIO.  NBC News: “Even in a year where Democrats picked up more than 35 seats in the House, Republicans still won white voters by a solid 10 percentage points.”

“But Democrats won college-educated voters by an even more substantial 20 points (continuing a trend that’s been underway for some years). And Hispanic/Latino voters went to Democrats by a massive 40 points, an even bigger edge than the party usually has with that group of voters.”

These trends — combined with the demographics of several traditional battlegrounds and the results of the midterm elections — suggest Ohio and Colorado may no longer be swing states, but Arizona and Georgia may have taken their place.

Donna Edwards on why Nancy Pelosi must be the next Speaker: “I remember when I was sent to Congress in a special election in 2008, having beaten an eight-term incumbent for whom then-Speaker Nancy Pelosi had campaigned. I was the progressive champion. I brought to the table a 20-year career as a nonprofit lawyer, advocate for women and progressive philanthropist. I was in no mood to support Pelosi and the “corporate Democrats” she represented. I was wrong. As soon as I was sworn in by the first female speaker, I began to appreciate the power of that role and her understanding of it. Once the election was over, it was over; I was her member. First, she wanted to know my aspirations and how she could help me achieve them.”