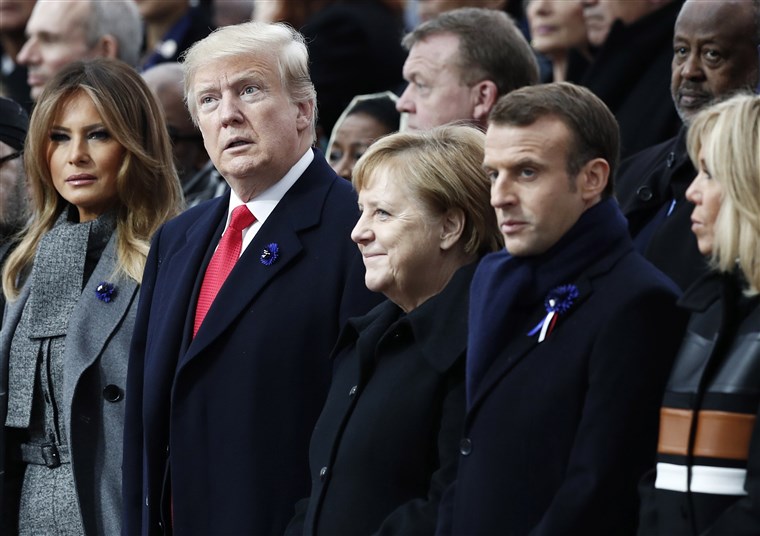 “Leaders from around the world gathered at the Arc de Triomphe on Sunday to commemorate the 100th anniversary of the armistice that ended World War I even as the international bonds that were forged in that moment of peace have again come under strain,” the New York Times reports.

“President Emmanuel Macron of France, who hosted the ceremony on a dreary, rain-soaked day, used the occasion to implicitly rebuke the ‘America First’ assault on globalism and international institutions by President Trump, who sat nearby stone-faced and unmoved.”

Said Macron: “Patriotism is the exact opposite of nationalism. Nationalism is a betrayal of patriotism. By saying, ‘Our interests first, who cares about the others,’ we erase what a nation holds dearest, what gives it life, what gives it grace and what is essential: its moral values.”

“Mr. Trump, listening to a translation through an earpiece, appeared grim during the speech and clapped unenthusiastically afterward.”

“President Donald Trump’s decision to cancel his visit to an American military cemetery outside of Paris threatened to overshadow his trip here, as government officials, historians, and fellow Republicans hammered him for more than 24 hours for that move,” Politico reports.   Said GOP operative Tucker Martin: “If Dems can’t figure out how to make hay for days out of Trump not visiting military cemetery on anniversary of conclusion of WWI because of a little rain…while other leaders attend…they really don’t deserve to win in 2020.”

Why Michelle Obama’s revelation that she had a miscarriage and did IVF matters https://t.co/3bCrtVGGic

NBC News: “Two members of congress, a cabinet official, a presidential confidant and a frequent guest on Fox News are among those being considered by President Trump to be the next attorney general… Rep. John Ratcliffe (R-TX) and retiring Rep. Trey Gowdy (R-SC) have also joined the list of those in the running.”

Beyond Ben Jealous, Stacey Abrams and Andrew Gillum, a new generation of young black politicians was elected this week: three new LGs, four new AGs, seven new House members — most of them the first African-American pol to hold those jobs. My story: https://t.co/o6S25d978p

“Campaigns and PACs spent at least $3.2 million at Trump-owned and branded properties throughout the two-year midterm election cycle, a CNN analysis of Federal Election Commission filings shows. And the total could rise after post-election financial reports are published by the commission.”   “No single group spent more than the Republican National Committee, which spent at least $1.2 million at the properties since the start of 2017.”

Alabama and West Virginia moved one step closer to banning abortion for all residents on Tuesday. https://t.co/OtwfYN17LI

Rep. Jerrold Nadler (D-NY), who is poised to take control of the House Judiciary Committee in January, said that he plans to call acting attorney general Matthew Whitaker as his first witness, the Washington Post reports.  The hearing would focus on Whitaker’s “expressed hostility” to special counsel Robert Mueller’s Russia investigation, which Nadler called “a real threat to the integrity of that investigation.”  Nadler added that he is prepared to subpoena Whitaker if necessary.

The Weekly Standardposted audio of Rep. Steve King (R-IA) using derogatory language to apparently refer to Mexican immigrants at a campaign event after King and his campaign denied the comments were made.

On the audio, King says that if he wants to grow spicy jalapenos, he’ll have to import dirt from Mexico. When King laughs at his comment, an attendee interjects, saying the dirt from Mexico is already “on the way.” King agrees, saying, “there’s plenty of dirt” coming from Mexico, the West Coast and other places, too. “This is the most dirt we’ve ever seen.”

"All this might well be a one-off. But if it turns out to be part of even a weak trend line, it’s not sustainable for the Republican Party here," writes Texas-native @cd_hooks: https://t.co/qxUg710Kj3

Texas Tribune: “As political operatives processed election returns, the central question on their minds was this: Will Democrats build on this success, or was O’Rourke, the political landscape and the unique vulnerabilities of Cruz the equivalent of lightning in a bottle that won’t be replicated any time soon?”

“Fired FBI chief James Comey used his private Gmail account hundreds of times to conduct government business — and at least seven of those messages were deemed so sensitive by the Justice Department that they declined to release them,” the New York Post reports.

“The former top G-man repeatedly claimed he only used his private account for ‘incidental’ purposes and never for anything that was classified — and that appears to be true.”

“But Justice acknowledged in response to a Freedom of Information request that Comey and his chief of staff discussed government business on about 1,200 pages of messages, 156 of which were obtained by The Post.”

Everyone used and uses personal email addresses for government work, which is why the Hillary email thing was so hypocritical and disingenuous.

Washington Post: “Day by day, the outlook for Democrats in the House has improved. At the offices of the Democratic Congressional Campaign Committee, already high spirits have been rising all week as more races fell into the party’s column. One joke that has been making the rounds there goes like this: “This is actually turning out to be more of a Hanukkah than a Christmas election,” meaning day after day of gifts, rather than just one.”

“This was always an election that would test the strength of the economy, which favored the president’s party, vs. the president’s low approval ratings, which, along with the record of past midterm elections, pointed to Democratic gains. In the end, history and presidential approval combined to give Democrats control of the House by what appears to be a comfortable margin.”

In California, “a Democrat has all but officially won what’s considered one of the most important local races this election, as Republican Rob Poythress on Saturday conceded to Democrat Anna Caballero in the race for the Senate District 12 seat,” the Fresno Bee reports.

“Once her victory is sealed, Caballero would give Democrats in the state Legislature a supermajority in both houses, just as the state also elected Democrat Gavin Newsom as governor.“

"If he invited me to a public hanging, I'd be on the front row"- Sen. Cindy Hyde-Smith says in Tupelo, MS after Colin Hutchinson, cattle rancher, praises her.

Hyde-Smith is in a runoff on Nov 27th against Mike Espy. pic.twitter.com/0a9jOEjokr

Sen. Cindy Hyde-Smith (R-MS), who is currently campaigning in a run-off election for that seat against Democratic challenger Mike Espy, joked in a video published Sunday that if a cattle rancher she was campaigning with “invited me to a public hanging, I’d be on the front row.”

Hyde-Smith has been a senator since April; she was appointed to the seat after incumbent Sen. Thad Cochran (R-MS) resigned due to health concerns. The current race between her and Espy will determine who serves the rest of Cochran’s term, through January 2021. The run-off Senate election — the result of neither Hyde-Smith nor Espy earning more than 50 percent of the vote on Election Day — will take place on Nov. 27.

Hyde-Smith’s comment immediately drew harsh criticism, given Mississippi’s (and many other states’) long and brutal history of lynchings and public executions of African American citizens.

This is fantastic news. The @nytimes editorial board just came out in support of @fairvote's Fair Representation Act, which would usher in a distinctly American form of proportional representation. https://t.co/P6rcWoLWyI

Sinema’s lead grew to 29,832 votes and gave her a 1.4 percentage point advantage.

While McSally’s vote deficit grew, Republicans took aim at the election process. In a statement Saturday, the National Republican Senatorial Committee attacked Maricopa County Recorder Adrian Fontes, a Democrat, saying he “has been using his position to cook the books for Kyrsten Sinema.”

Pete Davidson appeared on the “Weekend Update” segment of Saturday Night Live to apologize to veteran and congressman-elect Dan Crenshaw (R-TX), and this time he brought Crenshaw with him.

Said Davidson: “The man is a war hero and he deserves all of the respect in the world. And if any good came of this, maybe it was that for one day the left and the right finally came together to agree on something — that I’m a dick.”

“White House officials have identified Interior Secretary Ryan Zinke as the Cabinet member most vulnerable to a congressional probe under a Democratic majority in January, putting the colorful secretary closer into the president’s crosshairs,” the Washington Post reports.

“The new assessment comes as President Trump is weighing whether to dismiss Zinke… Trump has told aides he will make a decision next week after he returns from Paris.