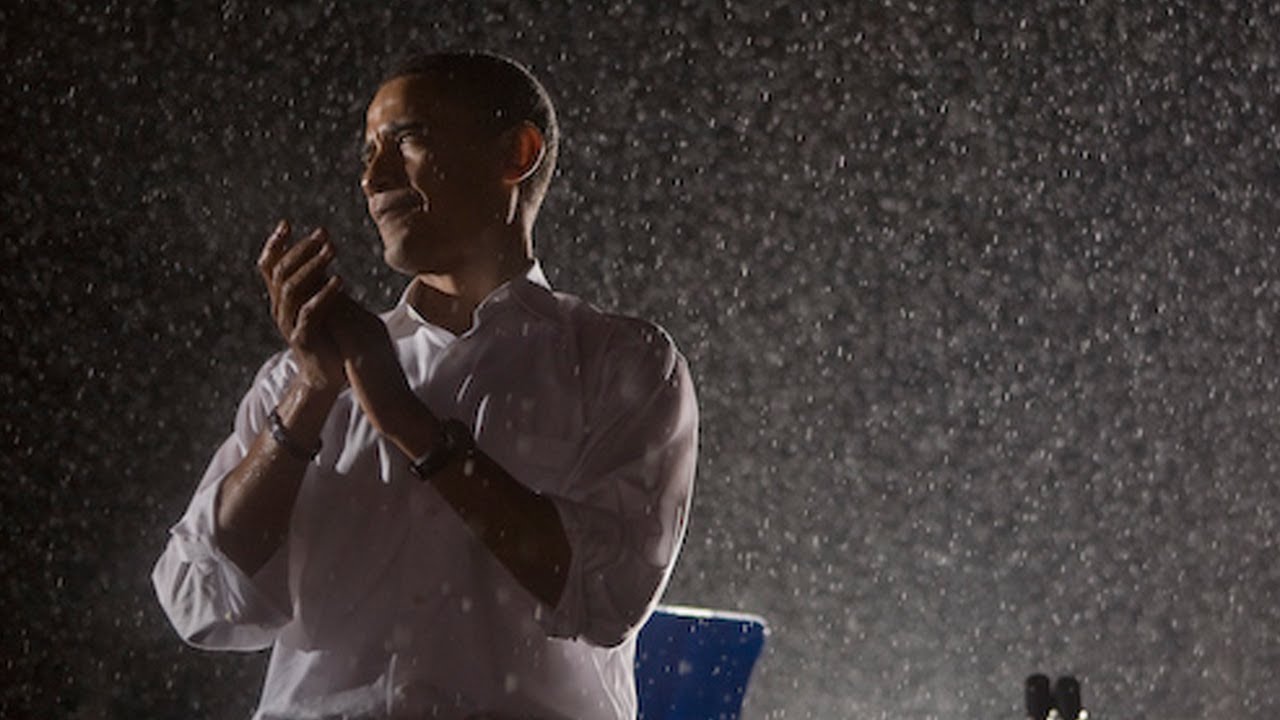 A REAL MAN STANDS IN THE RAIN TO HONOR THE TROOPS.  Washington Post: “Early Saturday, the White House announced Trump and the first lady had scuttled plans, due to bad weather, for their first stop in the weekend’s remembrance activities — a visit to the solemn Aisne Marne American Cemetery, marking the ferocious Battle of Belleau Wood.”

The incomprehensible reason given by the White House was that Marine One was grounded due to the rain, and there was no Plan B, like driving the 50 minutes from Paris to the memorial site like all the other world leaders did.   Further, helicopters work in rain, as do other Presidents who were much better men than Trump.

“But the sight of dignitaries arriving at other sites outside Paris, including Canadian Prime Minister Justin Trudeau, German Chancellor Angela Merkel and French President Emmanuel Macron, led some foreign policy analysts to speculate the U.S. commander in chief just wasn’t up for it.”   Fucking outrageous.  Resign already, Trump.  If you can’t do the job, and sometimes the job requires you to stand in the rain, then resign.

“I’m certainly guilty of bluffing and posturing and punking the Democrats. Unless they’ve passed some law against bullshit and I missed it, I’m engaging in tradecraft. It’s politics.” — Roger Stone, in an interview with the Washington Post.   They did.  There is a law against lying under oath.  There are laws against fraud.  There are many laws against the type of dirty trucks Stone practices.  But most importantly, there is a law against conspiring with a foreign government against the United States.

Playbook: “Patriot Majority, a non-profit group aligned with House Democrats, is running a six-figure, nationwide television campaign framing the House Democrats’ agenda before the new Congress. The 30-second spot will start airing on Sunday shows this week, and run through Thanksgiving. It’s worth watching, if only to understand a bit more about what Democrats plan to do in 2019 and 2020.”

From the ad: “We’ve been counted out. Frozen out. And forgotten. By a White House and Washington mired in special interest politics. But we can take our country back with a Democratic agenda for the people. That means lowering health-care costs. Increasing pay through rebuilding America. And cleaning up corruption. And it means having the strength to stand up for our values. It’s time to make Washington work for the people again.”

Andrew Gillum (D) withdrew his concession to Ron DeSantis (R) in the Florida governor’s race on Saturday, hours after the secretary of state announced a recount of their race and two others, CNN reports.  Said Gillum: “I am replacing my words of concession with an uncompromised and unapologetic call we count every single vote.”

“Florida officials said vote tallies from counties… show the races are close enough to trigger a recount,” the Washington Post reports.  “A machine recount and possibly a hand recount will be necessary to learn the outcomes of the races between Sen. Bill Nelson (D) and Gov. Rick Scott (R), who is seeking to unseat him, and between former congressman Ron DeSantis (R) and Tallahassee Mayor Andrew Gillum (D), who are vying for governor.”

Said Trump: “There is no reason for these massive, deadly and costly forest fires in California except that forest management is so poor. Billions of dollars are given each year, with so many lives lost, all because of gross mismanagement of the forests. Remedy now, or no more Fed payments!”

He is such a piece of shit.  Always blaming the victim.  No empathy.  First, he and his Republican Congress cut funding for forest management on federal lands, which, by the way, account for all but 2% of California’s open land.  So if the President is looking for someone to blame for a forest fire, look in the fucking mirror.   Second, these wildfires are caused by dry conditions and wind, which are both exasperated by climate change.  So I am not sure what forest management would work to alleviate those conditions.  Does he think that California should be constantly watering all vegetation in the state?

“President Trump is set to award the Presidential Medal of Freedom — the nation’s highest civilian honor — to the wife of one of the Republican Party’s most prominent patrons,” Politico reports.

“Miriam Adelson will receive the medal along with six other ‘distinguished individuals’ at a ceremony on Friday… She is married to billionaire Las Vegas casino magnate and GOP megadonor Sheldon Adelson, who joined Trump for a watch party at the White House residence on Tuesday evening to monitor the incoming returns from the 2018 midterm elections.”

Democrats now control the House. How will they approach foreign policy? With a more investigative stance toward Trump, @UriLF writes: https://t.co/KgXkuM9lTq

Matthew Whitaker, the nation’s new acting attorney general, “repeatedly chided presidential candidate Hillary Clinton in public statements during 2016 while he was speaking for a group that is barred by its tax-exempt status from supporting or opposing political candidates during a campaign,” the AP reports.

“Before coming to the Justice Department in 2017, Whitaker was president and executive of the Foundation for Accountability and Civic Trust, a charitable organization that styles itself as nonpartisan government watchdog promoting ethics and transparency. The tax-exempt group — known by its initials, FACT — is supposed to serve the public interest under Section 501c3 of the U.S. tax code, without directly or even indirectly supporting or opposing specific candidates for office.”

“Matthew Whitaker, the new acting attorney general, has said that states have the right to nullify federal law, but that they need the political courage to do so,” CNN reports.

Whitaker made the comments during a failed 2014 run for the Republican Senate nomination in Iowa.”

Said Whitaker: “As a principle, it has been turned down by the courts and our federal government has not recognized it. Now we need to remember that the states set up the federal government and not vice versa. And so the question is, do we have the political courage in the state of Iowa or some other state to nullify Obamacare and pay the consequences for that?”

"Elected officials in the Republican Party should have no doubt that Donald Trump will force them to choose in coming days, weeks, and months between loyalty to him and loyalty to the rule of law," writes @conor64: https://t.co/rIkwCz4z9w

“In the three days after the Democrats captured the House, President Trump fired his attorney general and replaced him with a loyalist critical of both the courts and the Russia investigation. He banned a CNN correspondent from the White House, while threatening he would do the same to other journalists. And he accused election officials in Florida and Arizona of rigging the vote against candidates he had campaigned for,” the New York Times reports.

“It was a remarkable assault on the nation’s institutions, even by a president who has gleefully taken a hammer to the press, to judges and prosecutors he does not like, and to an electoral process he has denounced as fraudulent since the day he took office.”

“Mr. Trump’s actions suggested a president lashing out after a midterm election loss that he had initially cast as a victory.”

After campaigning in defense of Obamacare, a bill to stabilize the Obamacare insurance markets would be the obvious first item for the new Democratic majority’s agenda. https://t.co/DVNwohQ2eI

“An audio recording that Turkish officials say captures the dying moments of journalist Jamal Khashoggi as he is killed in the Saudi Consulate in Istanbul has been shared with Saudi Arabia, Britain, France and Germany in addition to the United States,” the Washington Post reports.

Said Turkish President Recep Tayyip Erdogan: “We gave it to Saudi Arabia. We gave it to America. To the Germans, French, English, we gave it to all of them.”

“Turkey has not said how it has a recording from inside the consulate.”

"America doesn’t have a 'tribalism' problem. It has a racism problem. And the parties are not equally responsible," argues @AdamSerwer: https://t.co/iBL0FO0Qqv

“Over the final two weeks of the midterm elections, according to closed-captioning data compiled by the Internet Archive, Fox News and Fox Business Channel each mentioned the word caravan in an average of a little over 3 percent of 15-second segments over the course of a day. In other words, the caravan was mentioned an average of almost eight times an hour. On CNN and MSNBC, the mentions were more modest, but not nonexistent,” the Washington Post reports.

“On Monday, both CNN and Fox News mentioned the caravan more than 80 times. On Tuesday, more than 40. On Wednesday and Thursday, the subject was raised fewer than 80 times across CNN, MSNBC, Fox News and Fox Business combined.”

President Trump “is telling people he wants to replace Commerce Secretary Wilbur Ross by the end of the year,” CNBC reports.  “Trump favors Linda McMahon to replace Ross in the role, said these people… He is also considering Ray Washburne, whom Trump appointed as president and CEO of Overseas Private Investment Corporation last year.”

Los Angeles Times: “McCarthy spent the months since Paul Ryan announced his retirement quietly shoring up his support for a bid for speaker among the Republican conference and acting as a top campaign surrogate by raising money and support for colleagues across the country.”

“But some had questioned if McCarthy had done enough to court the most conservative members of the conference. … But the calculus is different for a minority leader race compared with a speaker’s race, which should make it easier for McCarthy to lock it down.”  Why?  Because he only has to win a majority of his caucus.  In a Speaker election, he would need to win the majority of the House and the Freedom Caucus and the Democrats would have denied him.

Washington Post: “It was a major defeat for President Trump, who attacked the Obama administration for failing to move ahead in the face of protests based largely on environmental concerns. Trump signed an executive order two days into his presidency setting in motion a course reversal on the Keystone XL pipeline and the Dakota Access pipeline.”

“The decision, issued by Judge Brian Morris of the U.S. District Court for the District of Montana, does not permanently block a permit but requires the administration to conduct a more complete review of potential adverse impacts related to climate change, cultural resources and endangered species. It basically ordered a do-over.”