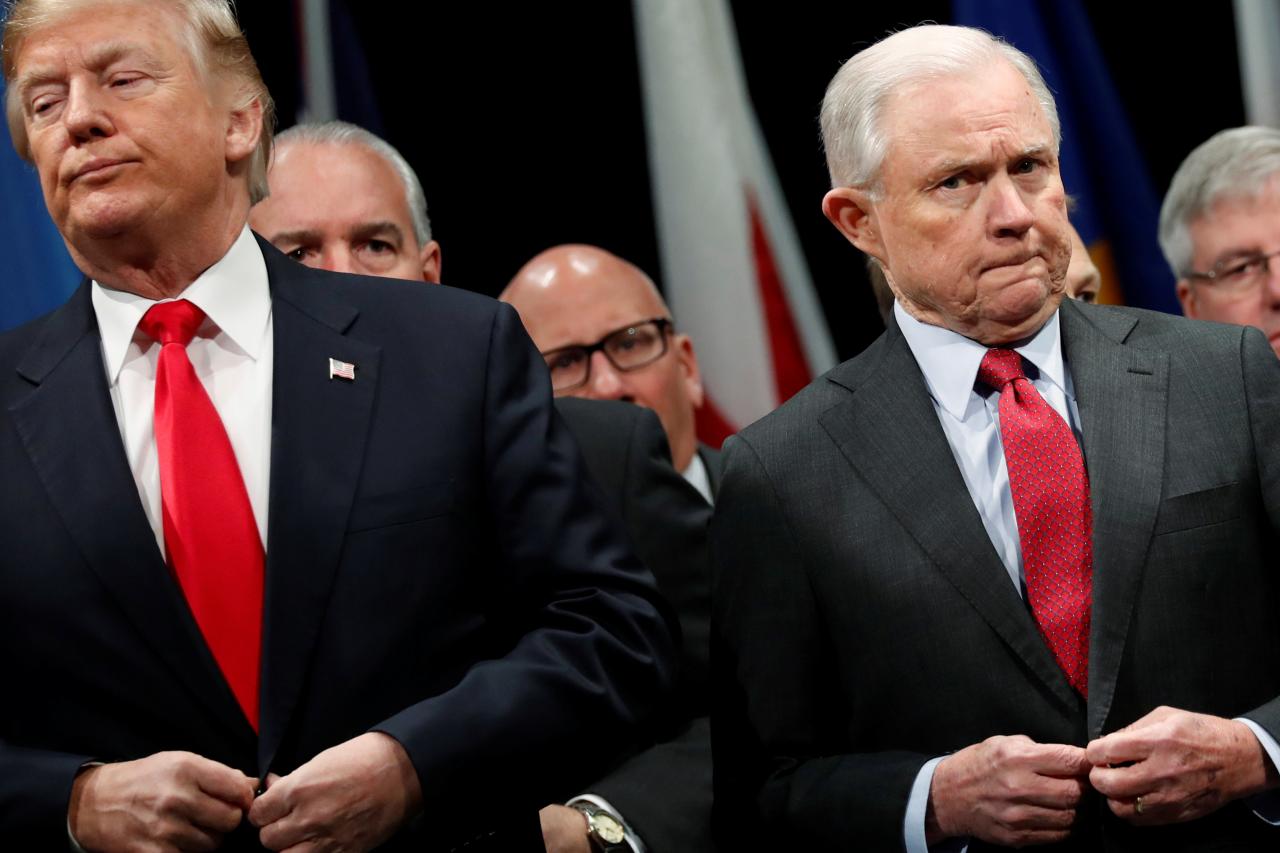 Said Schumer: “I’d say this, protecting Mueller and his investigation is paramount. It would create a constitutional crisis if this were a prelude to ending or greatly limiting the Mueller investigation.”

I want to thank Jeff Sessions for his service to our country as Attorney General. Under Acting Attorney General Matthew Whitaker, it is imperative that the important work of the Justice Department continues, and that the Mueller investigation proceeds to its conclusion unimpeded.

Sen. Susan Collins (R-ME) warned the Trump administration against interfering with special counsel Robert Mueller’s Russia investigation, saying he “must be allowed” to finish it, The Hill reports.  Said Collins: “It is imperative that the Administration not impede the Mueller investigation. I’m concerned Rod Rosenstein will no longer be overseeing the probe.”

My statement on the resignation of Attorney General Jeff Sessions. pic.twitter.com/DGYve0oLu1

Jonathan Chait: “Before the forced resignation of Jeff Sessions as Attorney General, it was possible, however optimistically, to dismiss his authoritarianism as mere rhetoric and affect. It is not possible any longer. Sessions’s departure, and his replacement with Mark Whitaker, is Trump’s plan to corrupt the Department of Justice. It is the most dire threat to the republic since Trump’s election itself.”

“If you study literature of democratic backsliding, the frightening conclusion is that nobody has devised a system of laws comprehensive enough to guarantee the survival of a democratic government. Because there is always wiggle room in the execution and enforcement of the law, democracies rely on informal norms. One of those norms is the independence of federal law enforcement, without which, the ruling party could use the law as a weapon against its enemies while shielding itself.”

“There is simply no doubt that Trump’s entire rationale for firing Sessions is his refusal to quash the Russia investigation, because he has not even bothered to conceal his motive.”

Vanity Fair: “Trump’s move against Sessions today arrives at a moment when Trump allies are increasingly concerned about Donald Trump Jr.’s legal exposure. In recent days, according to three sources, Don Jr. has been telling friends he is worried about being indicted as early as this week.”

“One person close to Don Jr. speculated that Mueller could indict him for making false statements to Congress and the F.B.I. about whether he had told his father about the June 2016 Trump Tower meeting with Russians to gather ‘dirt’ on Hillary Clinton. This source had heard that the case could revolve around Trump’s former deputy campaign chairman, Rick Gates, who’s cooperating with Mueller and who was deeply involved in the campaign at the time of the meeting. Trump, this person continued, is ‘very upset’ about the risks Don Jr. faces.”

Said the source: “The president is very depressed.”

Less than a day after the Democratic House takeover might have tempted you to relax a bit, Trump immediately reminded us that he's still a dangerous authoritarian who emboldens white nationalists and is prepared to burn it all down to save himself:https://t.co/XW5mULlAZ3

John Harwood: “His words of self-celebration signal one thing, his actions another: that President Trump knows he is in big trouble.”

“After American voters hit the brakes on his administration by flipping the House to Democratic control, Trump called a White House news conference to insist he had won ‘almost a complete victory.’ That referred to GOP gains in the Senate, which remains in his party’s control thanks to victories in conservative states he had won handily in 2016.”

“And then he made plain he understands viscerally what he has lost.”

Voter suppression really may have made the difference for Republicans in Georgia https://t.co/Yr4Iad9k8J

“Voters in Idaho, Nebraska and Utah on Tuesday were on track to approve what their Republican-led legislatures repeatedly would not: free or low-cost health coverage for most poor adults through an expansion of their Medicaid programs,” the New York Times reports.

“The three deep-red states are now poised to join 33 others that have already expanded Medicaid, an option under the Affordable Care Act since 2014.”

50 Things That Went Very Well on Election Day https://t.co/Cmx7C6sjys Share with your friends.

A recount will be conducted in Florida’s hard-fought U.S. Senate race after challenger Rick Scott’s (R) lead over Sen. Bill Nelson (D-FL) fell below the threshold of half of one percent, the Gainesville Sun reports.  Said Nelson: “We are proceeding to a recount.”

President Trump “said he would fight fire with fire if Democrats follow through on their vows to use the subpoena power that will come with the House majority to demand the release of his tax returns and reopen the chamber’s investigation into any interactions between Mr. Trump’s campaign and Russia during the 2016 campaign,” the New York Times reports.

He said he would adopt a “warlike posture” and get the Senate Republicans to investigate the Democrats.

Said Trump: “They can play that game, but we can play better because we have a thing called the United States Senate and a lot of questionable things were done between leaks of classified information and many other elements that should not have taken place.”

He added: “I could see it being extremely good for me politically because I think I’m better at that game than they are, actually, but we’ll find out.”

"The election amounted to a simultaneous repudiation and reaffirmation of Trump from two very different Americas, and underscored the fundamental demographic, cultural, and economic changes reshaping America and its politics." My take on Tuesday. https://t.co/QrVKCc2fyf

Walter Shapiro: “The new Democratic House majority — and the almost certain return of Nancy Pelosi as speaker — represents a triumph over gerrymandering. Not too long ago political orthodoxy decreed that the Republicans would control the House until after the 2020 Census because the district lines were so artfully drawn by the GOP after the Democratic wipeout in the 2010 elections.”

“Instead, the 2018 House elections were a belated vindication of Hillary Clinton’s failed 2016 strategy of pitching herself to college-educated suburban Republican women. These women were Clinton’s target audience when she maladroitly described half of Trump supporters as ‘a basket of deplorables’ because of their ‘racist, sexist, homophobic, xenophobic’ views.”

“As Trump in the White House fulfills every dire prophecy about his vitriolic fear mongering, affluent suburbs are increasingly becoming part of the permanent Democratic coalition.”

After the initial coverage indicated otherwise, @nate_cohn observes, correctly, that "2018 looks like a wave election, like the ones that last flipped the House in 2010 and 2006." https://t.co/rMN2wsUXeT

“Arizona’s former Green Party Senate candidate Angela Green is defending herself against accusations that she has spoiled the Democrat’s chances of winning the race,” the Washington Post reports.

“While the race is still too close to call, Republican nominee Martha McSally currently leads Democratic nominee Kyrsten Sinema by 15,908 votes (with 99.3 percent of precincts reporting). Green got more than twice that amount, 38,597 votes, despite dropping out of the race less than a week before Election Day — too late for her name to be removed from the ballot.”

Fuck the Green Party and all its voters.  Ralph Nader.  Jill Stein.  And now this.

“Stacey Abrams, the Democratic nominee for governor of Georgia, continued Wednesday to hold out hope for a runoff with Republican Brian Kemp, who saw his lead shrink a bit overnight, but was still ahead with more than 50 percent of the vote,” the Washington Post reports.

“Kemp was just over 15,000 votes above the threshold to avoid a runoff, said Lauren Groh-Wargo, Abrams’s campaign manager, who estimates there are at least that many outstanding mail-in ballots that have yet to be counted in Democratic-leaning counties.”

Senate Majority Leader Mitch McConnell (R-KY) called for “working on a bipartisan basis to address shortcomings in the Affordable Care Act as Democrats prepare to take control of the House,” the Washington Post reports.

“His comments marked a sharp departure from Republican efforts during the past two years to repeal former president Barack Obama’s signature health-care law while the party controlled both chambers of Congress and held the presidency.”

"With Sessions gone, Trump will be looking for a replacement who sees the law the way he does: a set of rules that applies to his enemies but not to himself or the charmed circle that surrounds him," argues @AdamSerwer: https://t.co/PhACVOXmyh