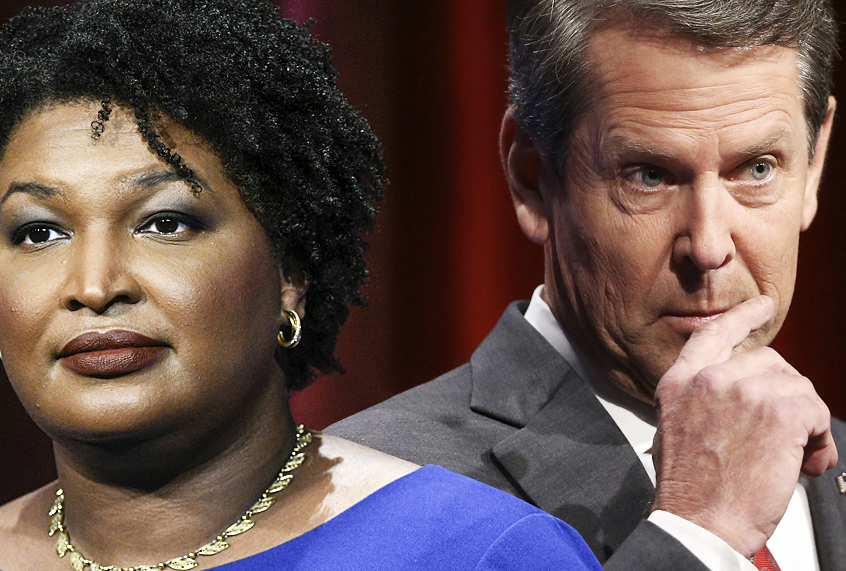 Without providing or citing to any evidence and without offering any specific details, the Republican Brian Kemp, the incumbent Secretary of State responsible for the conduct of state elections, abused his office by initiating a blatantly political and frivolous “investigation Sunday into the Democratic Party after an alleged attempt to hack the state’s voter registration system,” the Atlanta Journal Constitution reports.

“The Democratic Party of Georgia called the allegation  ‘100 percent false’ and ‘an abuse of power’ by Kemp’s office.”

Here is what is really going on: “When Georgia Democrats were alerted to what they believe to be major vulnerabilities in the state’s voter registration system Saturday, they contacted computer security experts who verified the problems. They then notified Secretary of State Brian Kemp’s lawyers and national intelligence officials in the hope of getting the problems fixed.  Instead of addressing the security issues, Kemp’s office put out a statement Sunday saying he had opened an investigation that targets the Democrats for hacking.”

Rick Hasen: “In perhaps the most outrageous example of election administration partisanship in the modern era, Georgia Secretary of State Brian Kemp, who is running for governor while simultaneously in charge of the state’s elections, has accused the Democratic Party without evidence of hacking into the state’s voter database. He plastered a headline about it on the Secretary of State’s website, which thousands of voters use to get information about voting on election day.”

“It’s just the latest in a series of partisan moves by Kemp, who has held up more than 50,000 voter registrations for inconsistencies as small as a missing hyphen, fought rules to give voters a chance to prove their identity when their absentee ballot applications are rejected for a lack of a signature match, and been aggressive in prosecuting those who have done nothing more than try to help those in need of assistance in casting ballots.”

“But the latest appalling move by Kemp to publicly accuse the Democrats of hacking without evidence is even worse than that: Kemp has been one of the few state election officials to refuse help from the federal Department of Homeland Security to deter foreign and domestic hacking of voter registration databases.”

Boston Globe: “Democrats woke up in November 2016 to the cold reality that the Blue Wall of reliable votes in upper Midwestern states that they counted on for years had crumbled, clearing a path for Donald Trump to take the White House.”

“Two years later, the party is aiming in Tuesday’s midterm elections to patch up that barrier, and Democrats appear on track to make gains in House and governor races in Michigan, Wisconsin, and Pennsylvania, three once-blue states that Hillary Clinton lost.”

“But there’s an open question hanging over the vote: Is this a temporary trend, fueled by reaction to Trump? Or are Democrats refashioning a coalition that will hold?”

“It’s sad in a way for me to contemplate this. Heller is genuinely one of the nicest people I have met in politics. That incandescent smile, that buoyant demeanor, that carefree mien. But he has surrounded himself with a confederacy of jerks who have not served him well, and he has traveled far from the days when he was a maverick secretary of state who really seemed to believe in things 25 years ago.”

“He is now willing to sacrifice his self-respect to embrace – nay, fawn over – a man he would ordinarily disdain (and did just two years ago) to clutch onto a job he does not like and is not very good at. Heller’s Velcroing himself to Trump is a pathetic act of political opportunism and so out of (what I thought was) his character.”

This happens too often for it to be innocent.

Los Angeles Times: “Swamped by a tidal wave of Democratic cash, Republicans entered the final 72 hours of the midterm campaign scrambling to preserve their slim Senate majority as a bulwark against the increasing prospect of a Democrat-run House.”

“Needing to gain 23 House seats for control, Democrats were burrowing deep into once-safe Republican territory, from the suburbs of Philadelphia, Minneapolis and Houston to California’s historically conservative bastions of Orange County and the Central Valley. The most optimistic GOP scenarios had the party hanging on to its majority in the 435-member chamber by a whisper-thin margin.”

Capt. Sully Sullenberger, the pilot who landed U.S. Airways Flight 1549 in the Hudson River off Manhattan after both engines were disabled by a bird strike, told NBC News that “everyone, everywhere must vote” against Republicans to save our democracy from a president who is not willing or able to change.

Said Sullenberger, a lifelong Republican: “It is my duty… I could not let my silence or civility connote acquiescence.”

Aaron Blake: “There are very obvious downsides to Republicans losing the House for Trump. Chief among them is that Democrats could leverage their newfound subpoena power to investigate his administration. They could possibly even obtain those tax returns that Trump clearly does not want us to see and expose what the New York Times has said are fraudulent tax schemes.”

”He would also be losing the ability to pass legislation without Democratic votes, a setup that gave him a signature tax-cut bill and at least a shot at other victories — a chance that could vanish the moment Democrats control the agenda in half of Congress.”

“But if you are looking at this purely from the vantage point of Trump’s self-interest — particularly as it relates to winning reelection in 2020 — there is a compelling case to be made that a Democratic House might be a good thing for the president.”

North Carolina congressional candidate Mark Harris (R), a former Baptist pastor in Charlotte, said in 2011 that there would be no peace in Israel unless Jews and Muslims converted to Christianity, The Forward reports.

Said Harris: “You cannot be in that land, as powerful and as moving as it is, without realizing the incredible tension that is constantly in that land between the Palestinians and the Jews. There will never be peace in Jerusalem until the day comes that every knee shall bow, every tongue shall confess that Jesus Christ is Lord.”

“It’s a signal that Donald Trump has been a disaster as president, that he’s a failure as president and the people of the Midwest are rising up in a big blue wave against him. That’s going to be disaster for his reelection,” said @JBPritzker https://t.co/IylYcRI9Km

New York Times: “Top officials on both sides agree that Republicans are likely to defeat Senator Heidi Heitkamp, Democrat of North Dakota, who is roughly 10 points down in the polls. But every other Senate Democrat is still seen as viable. That itself is rather extraordinary given that Democrats are defending 10 seats in states that President Trump carried.”

“If Democrats manage to lose just the Heitkamp seat, they have a (remote) chance of winning the Senate. They would have to win three of these four Republican-held seats: Texas, Arizona, Nevada and Tennessee.”

“Of the four, officials in both parties think Democrats are best positioned to win in Arizona and Nevada, where Mr. Trump’s incendiary language on immigration has infuriated Hispanic voters.”

Far right terrorism is rapidly increasing even as hateful white men are at the top of their political power.

What happens when they actually lose power?https://t.co/Lg8Skj3OF4

A new Journal of American College Health study finds that one quarter of college students experienced “clinically significant” symptoms of trauma from the 2016 election results.

Politico: “Haunted by memories of 2016, liberals around the country are riven with anxiety in the campaign’s home stretch. They’re suspicious of favorable polls and making election night contingency plans in case their worst fears come true. Some report literal nightmares about a Democratic wipeout.”

I can attest to all of this.

“The Republican Party has aired eight times as many ads focused on crime and public safety as it did during the last midterm election, according to a HuffPost analysis, a reflection of President Trump’s strategy of trying to fire up the GOP’s base with fear.”

“During the last midterm elections, in 2014, Republicans running for House and Senate seats aired ads about public safety more than 12,000 times… That number spiked to nearly 107,000 for the 2018 election, an increase of more than 800 percent.”

"…Dignity for all human beings, equality under the law, respect for dissent, love of truth. These are the things we are losing under this president, and no policy is worth that price." – @BariWeiss #RealTime pic.twitter.com/YGTUPYCgOL

Washington Post: “Gun-carrying civilian groups and border vigilantes have heard a call to arms in President Trump’s warnings about threats to American security posed by caravans of Central American migrants moving through Mexico. They’re packing coolers and tents, oiling rifles and tuning up aerial drones, with plans to form caravans of their own and trail American troops to the border.”