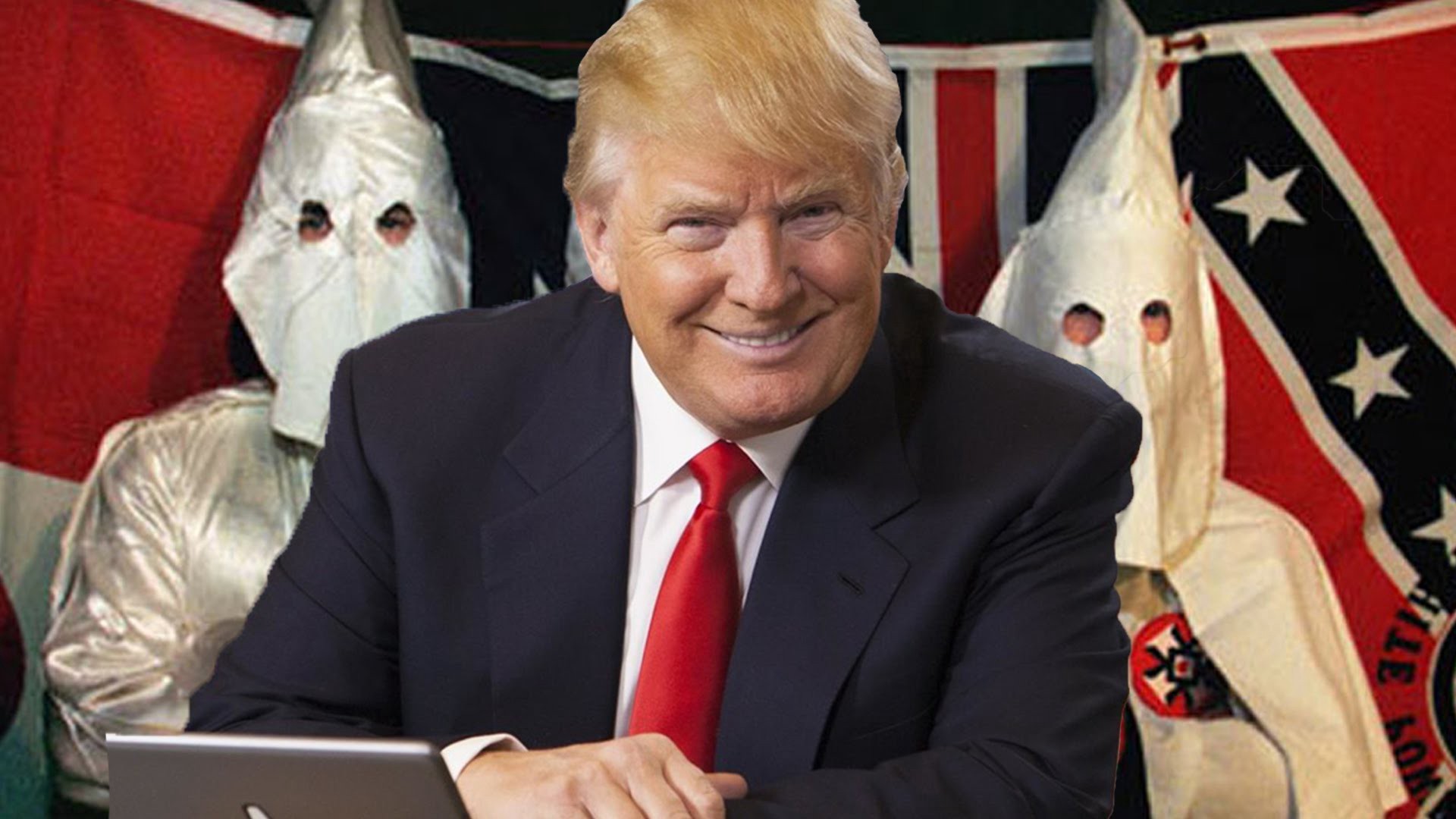 Congregants near the Tree of Life Synagogue in the Squirrel Hill neighborhood of Pittsburgh were ambushed on Saturday morning by a man who opened fire with multiple weapons. According to on-scene reports, the shooter shouted “All Jews must die” as he was firing into those present.  Those present where a family celebrating a bris of their newborn son.  11 are dead.  More are injured, including 4 police officers.  The White Supremacist currently serving as President blamed the deaths on the victims themselves, for if the Jews had been armed with guns during a bris then maybe they would be alive today, NBC News reports.

Said Trump: “They had a maniac walk in and they didn’t have any protection and that is so sad to see. If you take a look at it, if they had protection inside the results would have been far better.”  This President is a monster.

He added: “It’s a terrible, terrible thing what’s going on with hate in our country, frankly, and all over the world. It’s a violent world. You think when you’re over it, it just goes away but then it comes back in the form of a madman, a wacko.”

The Pittsburgh synagogue shooting is the latest in a years-long rise in anti-Semitism https://t.co/DvGi7bWJHH

Rick Wilson: “Cesar Sayoc isn’t just some loner gone wrong. He isn’t merely a one-in-a-million Unabomber with a cabin in the woods, a crazed manifesto, and too much black powder. Sayoc is the future. Donald Trump’s famously loyal base has been radicalized, and while only the tiniest fraction will resort to political violence, neither the president nor the hollow shell of the GOP will do anything to stop it.”

“This is a president with obvious mental and moral deficits who will say and do anything to retain power. He’s backed by a runaway ‘conservative’ media feeding his rabid base a daily dose of conspiratorial lunacy. There is no mechanism to stop Trump’s division, radicalization, and calls to arms against his enemies.”

“America was lucky this week; none of the weapons exploded, and the FBI and state law enforcement moved with amazing speed to apprehend the bomber. We might not always be so lucky, particularly if this president continues to give what future Sayocs see as their marching orders.”

David Remnick: “The midterm elections are being held in an atmosphere of immense national stress. It could only be so when the singular actor in the drama is Donald Trump, who thrives on the idea that American life is a daily cliffhanger, in which the hero bravely sets out to deepen the divide between his supporters and everyone else, to dismantle international agreements and alliances, and to protect corporate interests over the interests of working people and the natural world.”

“There are, unquestionably, countless local and regional issues being debated, but, above all, this election is a referendum on Trump, a contest between his base and those who feel that it is in the national interest to establish at least some brake—a new majority in the House of Representatives, a new crop of governors and state legislators—to slow his disintegration of American life and his despoilment of the national spirit. Two years ago, the prospect of a Trump Presidency represented an emergency. Tens of millions of voters found a reason to stay home. This year, the polls are tight. The stakes cannot be overstated.”

"Since the beginning of his presidential campaign," argues @AdamSerwer, "Donald Trump has weaponized his insincerity and the bad faith of his supporters in order to deny his own accountability for the things he does and believes." https://t.co/x6anGn17QV

“Donald Trump is living a personal nightmare. Just days before a critical election, he finds himself unable to influence what the political press is covering,” the Daily Beast reports.

“The president has spent the last week attempting to gin up media coverage of a caravan of migrants making their way from Honduras to the Mexico-U.S. border. He’s heralded his signing of a major bill to combat the opioid epidemic. He’s touted additional—though currently nonexistent—legislation to further slash middle-class taxes.”

“But a series of real-world events—primarily the dispatch of explosive devices to numerous top Democratic officials by what appears to be an obsessive Trump fan— have overwhelmed that storyline. And it’s left Trump notably churlish.”

Michelle Golberg’s excellent piece in The New York Times debunking the “both sides” argument when it comes to political violence:  “[T]here is no serious comparison between left-wing and right-wing violence in this country, either in the scale of the phenomenon or the degree to which it is encouraged by political leaders.

According to a report by the Anti-Defamation League, white supremacists were responsible for 18 of 34 “extremist-related murders” in the United States in 2017. Over the last decade, the report says, people on the far right were responsible for 71 percent of extremist killings. (Radical Islamists committed most of the rest.)

The violent part of the right is integrated into the Republican Party in a way that has no analogue on the left. A few months before the Unite the Right white nationalist rally in Charlottesville, Va., that devolved into a deadly riot, Corey Stewart, now the Republican candidate for Senate in that state, appeared at an event sponsored by one of Unite the Right’s organizers, Jason Kessler. (He’s since disavowed both Kessler and Paul Nehlen, a white nationalist he once described as a “personal hero.”) One rallygoer, James Allsup, had been president of the Washington State University College Republicans. He stepped down amid the ensuing controversy, but was later elected a precinct committee officer by his local party organization. (The Republican National Committee has denounced him.)”

The important thing is for people who are tracking these polls to be aware of their flaws, experts say. https://t.co/a1j9L3EkAk

Spencer Ackerman at The Daily Beast spoke to counterterrorism experts who said Donald Trump’s inflammatory rhetoric is precisely the kind that motivates people to violent acts: “By publicly demonizing his perceived adversaries at rallies and social media, Trump essentially painted a target on their backs,” said Daryl Johnson, a former Department of Homeland Security analyst of far-right extremism. “We’ve seen this same technique used by extremist spokespersons and leaders to incite others toward violent action.” […]

“When you allow this kind of permissive attitude of anger and hatred toward the media or your political opponents, that can be dangerous,” said Nada Bakos, a retired CIA counterterrorism officer. “You’re walking a fine line. You hold an office that has tremendous reach internationally and domestically.”

Adam Serwer takes a deep dive into Trump’s base at The Atlantic, explaining that the entire Trump premise is based on white identity politics:  “[T]he entire closing argument of the Republican Party in the 2018 midterm elections is a naked appeal to identity politics—a politics based in appeals to the loathing of, or membership in, a particular group. The GOP’s plan to slash the welfare state in order to make room for more high-income tax cuts is unpopular among the public at large. In order to preserve their congressional majority, Republicans have taken to misleading voters by insisting that they oppose cuts or changes to popular social insurance programs, while stoking fears about Latino immigrants, Muslim terrorists, and black criminality. In truth, without that deception, identity politics is all the Trump-era Republican Party has.”

The Atlantic: “A few hours before he went on stage, the Department of Justice announced the arrest of Cesar Sayoc in connection with a series of bombs sent to prominent critics of the president, including Barack Obama, Hillary Clinton, Maxine Waters, and George Soros. Trump has spent the last three days cycling rapidly through perspectives on the bombing, from a somber vow to catch the perpetrator to blaming the media to suggesting that the attack was a ‘false flag’ designed to hurt the Republican Party.”

“Trump started out measured in Charlotte, and tried to strike a measured tone. The only problem was that someone kept tripping him up: himself.”

“In literally the next breath he began a lengthy rhetorical barrage against the press, as though it was the mainstream media and not he that had celebrated and incited violence.”

Not only is Trump personally incapable of consoling the nation after a tragedy, his desperation to avoid post-midterm investigations of his criminal behavior makes it impossible for him.

“The U.S. economy expanded at a 3.5 percent pace in the third quarter as consumers opened their wallets, businesses restocked inventories and governments boosted spending, marking the strongest back-to-back quarters of growth since 2014,” Bloomberg reports.

“The data indicate a robust job market and lower taxes continued to propel demand among consumers and companies, giving President Donald Trump an opportunity to showcase his policies heading into the midterm congressional elections. At the same time, tariff-related bottlenecks and the trade war with China are headwinds for the nation’s second-longest economic expansion on record.”

Our new video on the endless stream of fearmongering in this cycle's political ads is up. Starring @paulwaldman1:https://t.co/HHcB1hwfAK

Reuters: “Democratic candidates for the U.S. Congress are closing out the campaign season with an ominous warning: telling voters millions of Americans could lose their health insurance or be forced to pay significantly more if Republicans win.“

New York Times: “Republicans, in defending a 23-seat majority, are likely to lose a handful of open or Democratic-tilting seats as well as another dozen suburban districts that Hillary Clinton carried in 2016, according to political strategists in both parties. But now Republican officials are increasingly concerned about Democratic incursions in some of the remaining 30 competitive districts on the House map where the G.O.P. candidates thought they had an edge.”

“For the final two weeks of the election, Democratic campaigns and outside groups are on track to substantially outspend Republicans, strategists on both sides say. Democrats are set to spend $143 million on television advertising in House races, compared with $86 million for the G.O.P.”

“Democratic super PACs and other outside groups are poised to outspend their Republican counterparts by a wide margin, erasing an advantage the G.O.P. planned on having.”

Josh Marshall: “As a friend pointed out yesterday, 2016 can be seen as a fluke. A series of perfect storm factors coming together to make Donald Trump president with a minority of the popular vote and razor thin margins in three critical states. 2018, if it’s a winning election for the Republicans, will be a choice. A ratification of everything we’ve seen over the last two years. That will be a reality we’ll all have to contend with for what it says about the state of the country. It will send a signal abroad that this is now the American political reality and unquestionably accelerate all the geo-political processes Trump has spurred or which drove him to the White House in the first place.”

“Domestically the impact will be worse. The political message will be simple: you can do all this stuff and suffer no political consequences.”

Joe Scarborough: “Is it any wonder that Trump Republicans are so desperate to change the subject from health care? After all, how do you face voters knowing that your primary political goal in Washington has been to wipe out health-care guarantees so multinational corporations and Mar-a-Lago billionaires can fatten their bank accounts and pour even more money into their children’s trust funds?”

“That platform won’t even play well in Palm Beach.”

“Despite Republicans opposing, denigrating and repeatedly trying to repeal Obamacare, a growing number of scared conservatives are now paying lip service to the preposterous idea that the law’s provision protecting coverage for those with preexisting conditions can remain intact even if the rest of the law is gutted.”