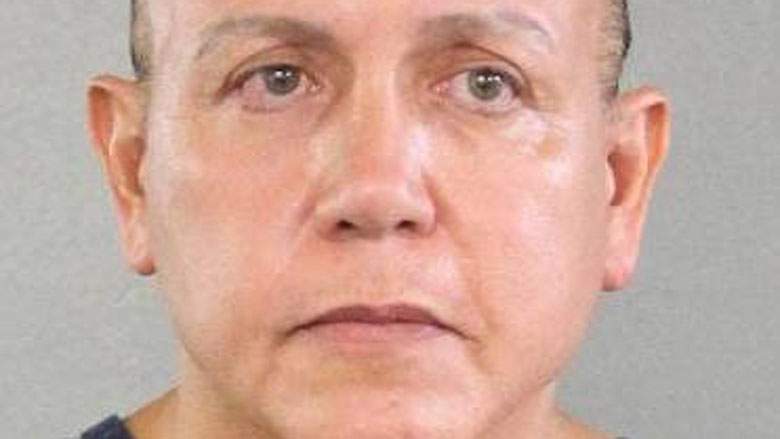 Numerous social media accounts that appear to belong to the Florida man reportedly suspected of carrying out a string of mail bomb attacks this week are overflowing with far-right conspiracies and pro-Trump propaganda.

Reuters, CNN and MSNBC have reported that Cesar Sayoc, Jr. was arrested Friday and taken into custody on suspicion of having sent crude mail bombs to CNN’s New York headquarters and prominent Democratic figures including Barack Obama and Hillary Clinton. Sayoc is a 56-year-old Hollywood, Florida resident, CNN reported.

The accounts are packed with a steady stream of images of President Trump and Vice President Pence giving the thumbs up, of memes about the incoming “red tsunami” in the midterm elections, and of Democrats engaging in “bribery” and “corruption.”

President Trump lamented that a series of apparent mail bombs sent to prominent Democrats is halting Republican “momentum” ahead of the midterm elections, The Hill reports.

Said Trump: “Republicans are doing so well in early voting, and at the polls, and now this ‘Bomb’ stuff happens and the momentum greatly slows – news not talking politics. Very unfortunate, what is going on. Republicans, go out and vote!”

“President Trump is weighing a plan to ban entry of migrants at southern border and deny them asylum,” the Washington Post reports.

“With the president’s attention fixed on the migrant caravan moving north through Mexico, the White House is considering whether to shut the border to Central Americans and deny them the opportunity to seek asylum in the United States, asserting similar emergency powers used during the administration’s controversial travel ban in early 2017.”

New York Times: “It would also be the most drastic in a series of steps Mr. Trump has taken or threatened to take in recent days — including preparations on Thursday to send as many as 1,000 active-duty Army troops to help secure the southern border — as he works to stoke fears of what he has called an ‘onslaught’ of immigrants only days before the midterm elections.”

Reuters: “Democratic candidates for the U.S. Congress are closing out the campaign season with an ominous warning: telling voters millions of Americans could lose their health insurance or be forced to pay significantly more if Republicans win.“

“The White House is planning a political rescue mission in Florida, fearing a wipeout in a key swing state next month that could damage President Trump’s reelection hopes,” Politico reports.

“Trump is expected to visit the state at least twice, according to two people familiar with the plans. Visits from several Cabinet members are likely, as well. Presidential text messages are being sent to Floridians who still haven’t cast their absentee ballots. And discussions are underway about blanketing the state with robocalls from Trump.”

Some Republicans told Politico a DeSantis loss would be akin to a rejection of Trump.

“Bolton and Mira Ricardel, the deputy national security advisor, who has repeatedly clashed with Mattis over Defense Department personnel appointments, believe the defense secretary is ‘not ideologically aligned’ with President Donald Trump’s administration.”

The caravan is still weeks from the US border — and it’s already shrinking https://t.co/8KZ9KGmQ8T

Associated Press: “Investigators have been searching coast-to-coast for the culprit and motives behind the bizarre mail-bomb plot aimed at critics of the president, analyzing the innards of the crude devices to reveal whether they were intended to detonate or simply sow fear two weeks before Election Day.”

“Law enforcement officials told The Associated Press that the devices,containing timers and batteries, were not rigged like booby-trapped package bombs that would explode upon opening. But they were still uncertain whether the devices were poorly designed or never intended to cause physical harm.”

At least, that’s what White House officials are telling themselves. https://t.co/zM6N1IsZVF

Associated Press: “The final stretch of the midterm campaign is increasingly dominated by debate over one of the most sensitive issues in American culture: race.”

“From New York to Florida, dog-whistle politics are showing up in ads and attacks from outside groups and, in some cases, GOP candidates. It’s playing out against the backdrop of President Donald Trump, who has tapped into racial anxiety with warnings of rampant violence in urban areas, voter fraud, a caravan of migrants and unknown ‘Middle Easterners’ threatening the U.S. southern border.”

At The Week, Damon Linker puts things in context:   “If the pipe bombs sent through the mail this week to two former presidents, a former presidential nominee, a former vice president, a former attorney general, a former CIA director, a sitting member of Congress, an outspoken actor, and a wealthy philanthropist and activist — all of them Democrats and/or staunch critics of President Trump — had exploded, killing or maiming their targets, this would have been hands-down the single most audacious act of domestic political terrorism, and potentially the single most ambitious act of political assassination, in our nation’s history.

Thankfully, none of the bombs exploded. No one was maimed or killed. And so the entire incident has become just the latest in an endless series of polarizing but merely performative political gestures that will most likely disappear down the memory hole a week or a month from now, succeeded by the next outrage and provocation, and then the next, and then the one after that.”

The DNC “is undergoing a series of internal and external discussions on how to handle primary debates during the 2020 presidential election,” The Hill reports.

“The sources say the discussions — which have been taking place for several months and are being led by interim DNC CEO Mary Beth Cahill and a small group of party officials — include how early in the cycle the debates should begin as well as how many debates the party should have, two main sticking points from the 2016 cycle.”

“DNC officials are also faced with how to handle the number of expected candidates and their criteria for being included in the debates. Some believe as many as 30 Democrats may run for president in 2020.”

“Kansas election officials are reviewing text messages claiming to be from President Donald Trump and telling residents that their early votes hadn’t been recorded, as Democratic leaders were quick Thursday to worry that they were part of efforts to ‘steal’ a close governor’s race,” the AP reports.

“State Elections Director Bryan Caskey said the Kansas secretary of state’s office received 50 or 60 calls about the texts Wednesday, mostly from the northeastern part of the state. Caskey said the office is trying to determine whether the texts broke a law before determining what to do next.”

A new FEC filing finds that Sen. Heidi Heitkamp (D-ND) raised $12.4 million in the first 17 days of October, including $7.5 million in small donor donations.  The donations all came in the days after she voted against Brett Kavanaugh’s nomination to the Supreme Court.

“Democrats outraised Republicans in about 90 percent of the most competitive House districts in the country between October 1 — October 17,” NBC News reports.

“Out of 107 House races rated as Toss Ups, Lean or Likely contests by the nonpartisan Cook Political Report, 97 saw the Democrat outraising their GOP competitor. In 70 of those races, the Democratic candidate will enter the final weeks of the election with more cash on hand.

Whatever Trump does at the federal level, Democrats still have a fighting chance in the state courts. https://t.co/xOKZjcsQfZ pic.twitter.com/awDnDKX58e