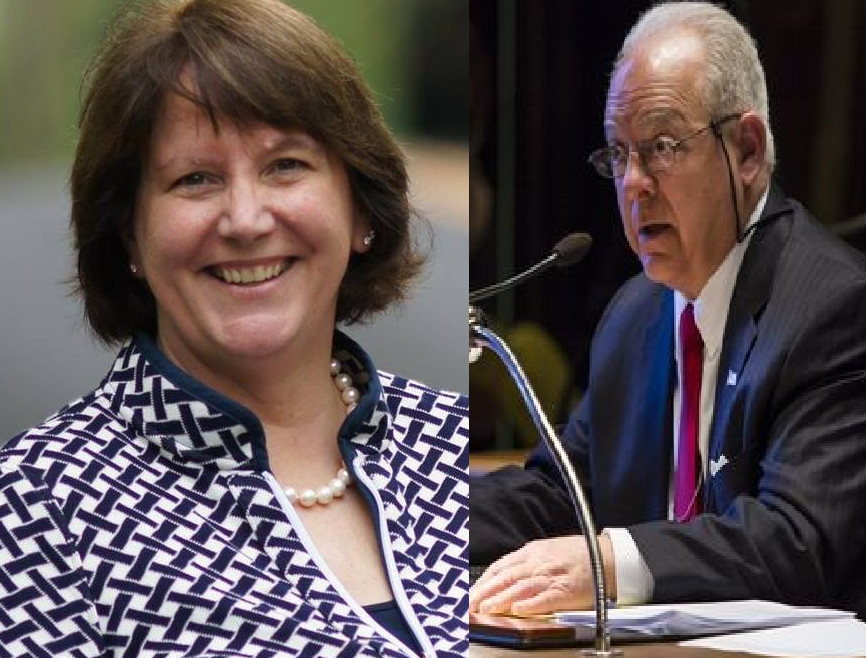 This is the first of two posts by Ken Hemphill, the founder of the Beaver Valley Preservation Alliance.   The second post will be published tomorrow morning at the same time.

The fate of the taxpayer-subsidized wildlife refuge in Beaver Valley rests with politicians who can stop Woodlawn from liquidating their remaining acres. While all officials can help, one seat is especially important: County Council 2nd District which includes Beaver Valley. So which candidate for the 2nd deserves your support? Dee Durham who’s volunteered in the conservation world her entire life, holding leadership roles for S.A.V.E. in Chester County, Preservation Delaware, as well as the French and Pickering Creek Trust? Or incumbent Bob Weiner who has consistently supported expansive rezoning projects in New Castle County like Brandywine CC, Cavaliers CC, and who cast the deciding vote to rezone Barley Mill Plaza?”  Would you want someone like Dee who has a long and unpaid record of working to protect our community, or someone like Bob Weiner who’s missed 27% of County Council meetings?

Dee doesn’t just talk about conservation, she puts her money where her mouth is. She worked for years as a volunteer in various organizations to protect us from overdevelopment, safeguard our environment, and protect our historic resources. Dee and her husband even donated the development rights to four acres of her property so that it could never be developed. This donated conservation easement came at considerable personal expense, but she felt strongly that her property – which borders Brandywine Creek State Park – should be off limits to development. Dee’s complete record of preservation work is too long to list here, but it’s worth noting that developers have recognized the threat she poses to their profits as she would bring her conservation principles and ideas for ethical government to County Council. It’s why she was pressured by members of her own party not to run against Bob Weiner, more evidence that the problems New Castle County faces have been caused by both parties. These problems can only be fixed with new blood and Dee is the transfusion New Castle County needs.

Weiner, on the other hand, has been a reliable friend to developers who, for their own personal profit, have greatly increased density and congestion in New Castle County, impairing your quality of life, inundating roads with choking traffic, and marring the character of the county. Weiner has claimed that he doesn’t take money from developers, but in just one recent campaign finance report we examined, he took money not just from a developer – Peter Carlino of the Carlino Development group – but from the developer’s entire team. Carlino’s lawyer, the lawyer’s wife, the developer’s law firm, the developer’s engineers, and others gave thousands in total to Weiner’s campaign war chest. There were other developer’s law firms listed, too, as were other construction outfits. When confronted with this evidence, Weiner pivoted, saying the money these developers (and their associates) gave “wasn’t that much.” In a small budget County Council race, a few thousand dollars can make all the difference in a campaign, and his coziness with developers is one of the reasons why he’s held his seat for two decades.

Those campaign donations have paid off in spades for the developers. Weiner enthusiastically supported the rezoning of the Cavaliers Country Club for Carlino, pushing for a massive handout of more than 700+ housing units instead of the 200 homes existing zoning allowed. Not surprisingly, he didn’t actually vote for the rezoning the night it was approved because he was on vacation again in the Caribbean. That absence, it turns out, is far from unusual. It’s just one of the 77 other absences Weiner’s logged in the last two years (putting him third from last in attendance on Council). Keep in mind, too, that County Council members are PAID. If you were Bob’s boss, would you let him keep his job with an absentee rate of 27%? But you are his boss.

The Cavaliers Country Club is not the only supermassive rezoning project Weiner has supported. He was an early advocate for rezoning the bankrupt 111 acre Brandywine Country Club on Shipley Road. Zoned for 150 houses, Weiner nevertheless went on WDEL in 2015 to advocate for hundreds of apartments and 150 houses. This increase in density represents quite a windfall for the developer, Louis Capano. Under the “by right” zoning density, a conservative margin of $50,000 per house would yield a profit of $7.5 million. However, under the rezoning plan of 360 apartments, 138 houses, and 10,000 square feet of commercial space Weiner supports, Capano’s profits would more than double, maybe triple, with commercial leasing revenue providing large, permanent returns. As if this enormous increase in scale were not enough, Weiner also supports building a road to connect Shipley to Route 202! You can understand why the taxpayers in that area are outraged. They formed the group CarZ to oppose this insanity and they’re one of the reasons Weiner has walked back some of his statements about this project.

Of course, the negative effects of adding such ill advised density to North Wilmington is not acknowledged by Weiner, nor has he ever voiced support for preserving Brandywine CC or Cavaliers CC as open space which has been done repeatedly in New Jersey. There is simply no other reason for rezoning this land but to increase profits for the developer, and Bob Weiner with his elaborate rationales for why he supports adding so much density has been instrumental in that regard for Capano (as well as Carlino). But his deciding vote and weak rationale for rezoning the Barley Mill Plaza was truly audacious and it piqued the ire of the judge in that Barley Mill Plaza lawsuit who had some very strong words for Weiner in the Memorandum Opinion:

“I find that Councilman Weiner’s vote was made in the absence of substantial facts, and it was therefore arbitrary and capricious…[The Delaware] Supreme Court in Tate v. Miles held that the County Council has the obligation to create a record establishing the Council’s reasons for effecting a rezoning so that a reviewing court can understand whether the stated rationales of the County [Council] Members who voted in favor of the rezoning show that the decision was not arbitrary and capricious…[T]he problem for the County Council is that the record reflects that at least one Councilman’s justification for his vote, since clearly uninformed114, was not reasonably related to the County’s health, safety, and welfare.” (emphasis added)

Footnote #114 at the end of the Memorandum Opinion:

#114: “Weiner’s failure to consider material, reasonably available information in the form of a traffic study violates his obligation, as a member of the County Council, to act in a manner reasonably related to the health, safety, and welfare of New Castle County.”

If you can believe it, Bob Weiner has actually revised (or forgotten) this written history, tooting his own horn to boot. In July of 2018 he made the following incredible statement: “I used my legal skill to obtain a reversal of the Stoltz Barley Mill Plaza rezoning in the Delaware Supreme Court. It was my testimony alone, upon which the Delaware Supreme Court based its reversal of the Stoltz Barley Mill Plaza rezoning.” Over the past six years of fighting for Beaver Valley, we’ve heard many misrepresentations and distortions of the truth, but for Weiner to actually say that he obtained the rezoning reversal at the DE Supreme Court confounds the senses since he cast the deciding vote to approve it! It wasn’t Weiner but an outraged group of citizens organized under the banner of Save Our County that spearheaded the grassroots resistance and legal action that secured the reversal. If it hadn’t been for Save Our County, the Barley Mill Plaza monstrosity would have been built.

It’s important to point out here that when Save Our County appealed County Council’s rezoning, Council didn’t have to defend theirt decision in court. They could have theoretically reversed their earlier vote. Instead, the majority (along with Weiner) on the Council fought the appeal in Chancery Court, and when they lost, they appealed to the Delaware Supreme Court where they lost again. When Weiner says that his legal skill and his testimony were the cause of the reversal, there’s actually a kernel of truth to the latter part of that, but not in the sense he means! As the deciding vote to approve Barley Mill Plaza, and then as part of the majority that appealed the Chancery Court’s decision, he (and the others) WERE the reason the Supreme Court reversed their approval because they had acted capriciously and arbitrarily.

While Weiner was casting votes to greatly increase traffic and population density in New Castle County, Dee Durham was working in Chester County to stop the vast commercial expansion along the Route 41 corridor, something that would have opened the door to cancerous growth in the White Clay Creek watershed, crushing new traffic volume, and a diminishment of southern Chester County’s charm. Dee has long understood something that Weiner seems not to: we live in a terrarium. It’s a big terrarium and we can’t see its walls, but it’s finite nonetheless. We can’t continue to promote unrestrained growth in a finite space without triggering negative economic consequences, excessive traffic and housing density, increased pollution, and a loss of historic and scenic landscapes. And higher density leads to higher taxes. More densely populated
communities/towns/counties pay higher total taxes as a rule, and taxpayers invariably pay to clean up pollution, widen roads, etc.

We expect Weiner will respond that he cares about preservation, and he’ll point to the red barn that’s shoehorned between the new Wilmington University building and the new Super Wawa as evidence of his concern. It’s true that Weiner did ask WU to make cosmetic repairs to that barn, yet Weiner enthusiastically supported the development of those 41 acres in the first place! Part of a taxpayer-subsidized wildlife refuge and owned by the Woodlawn Trustees, those 41 acres were purchased when Woodlawn was a 501(c)(3). They also enrolled the land in Delaware’s Agricultural Preservation Program, saddling them with an oppressive tax bill in 2014 of… wait for it…$91. Ninety one dollars for 41 acres. Who made up the difference in lost tax revenue? You did, and instead of supporting your rights as taxpayers, Weiner supported Woodlawn’s sale of this piece of open space.

Instead of fighting for this public gateway to a state and national park and pushing for, say, a visitors center, he instead fought for three monstrous buildings on land we all helped pay for twice (once when Woodlawn purchased it as a tax exempt entity and then again in the DE Ag Pres Program). Then he allowed WU to have a significant building height variance and then permitted WU to skip required road and intersection modifications even though several thousand new daily vehicle trips would come in and out of that campus. All this was done for a university which had the highest paid college president in America, Jack Varsalona at $5 million per year. It also had one of the highest rates of underpaid adjunct professors and only a 38% graduation rate. In other words, they have the money to make road modifications.

We think your choice this November is easy. If you care about your quality of life, open space protection, heading off more traffic, excessive housing density, real stewardship of our environment, and someone who will actually show up for work, then pull the lever for Dee Durham. If you want the opposite of this, vote for Bob Weiner.

If you want to learn more about Dee, see: https://www.friendsfordeedurham.us/about/

8 comments on “It’s Time for Councilman Bob Weiner to Go.”