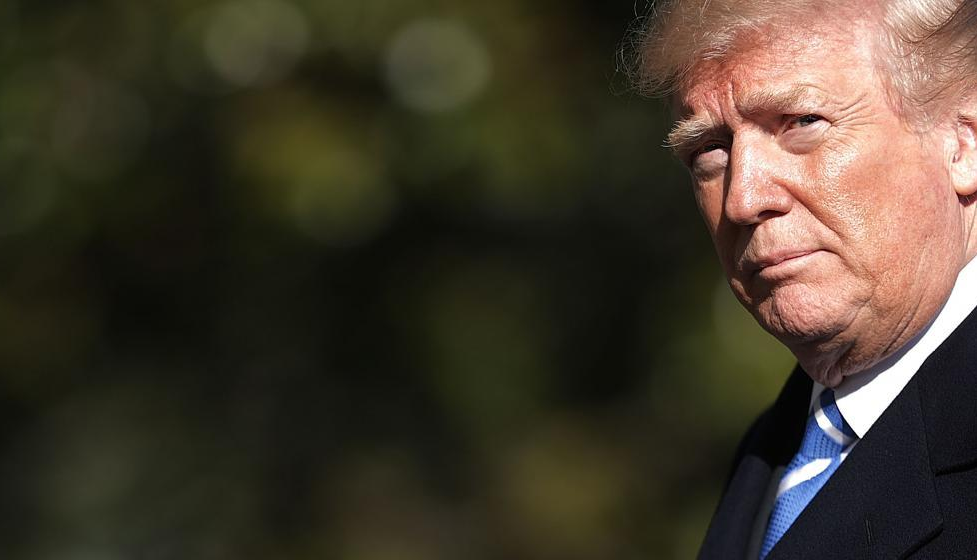 In Arizona last night, President Trump called Saudi Arabia’s explanation of journalist Jamal Khashoggi’s death a “good first step” and said he would work with Congress on a U.S. response, the AP reports.  Asked if he thought the explanation was credible, Trump said: “I do. I do.”  Meanwhile, a “well-wired Republican” texts Mike Allen the reason Trump is buying the Saudis’ story: “Constraining Iran is the priority and Saudi is a critical ally in that effort. That ‘trumps’ the horrible human rights violation.”

"The king has put an end to attempts to deny Khashoggi’s murder or to deflect blame on Turkey and Qatar," says @hxhassan: https://t.co/kBCVlT4Ys6

New York Times: “Each morning, Jamal Khashoggi would check his phone to discover what fresh hell had been unleashed while he was sleeping. He would see the work of an army of Twitter trolls, ordered to attack him and other influential Saudis who had criticized the kingdom’s leaders. He sometimes took the attacks personally, so friends made a point of calling frequently to check on his mental state.”

“Mr. Khashoggi’s online attackers were part of a broad effort dictated by Crown Prince Mohammed bin Salman and his close advisers to silence critics both inside Saudi Arabia and abroad. Hundreds of people work at a so-called troll farm in Riyadh to smother the voices of dissidents like Mr. Khashoggi. The vigorous push also appears to include the grooming — not previously reported — of a Saudi employee at Twitter whom Western intelligence officials suspected of spying on user accounts to help the Saudi leadership.”

The US-Saudi alliance is bad and dumb and we should not do it anymore. https://t.co/JdDFlvYojA

Turkey will “never allow a cover-up” of the killing of Saudi journalist Jamal Khashoggi in Saudi Arabia’s consulate in Istanbul, a senior official in Turkey’s ruling party said Saturday after Saudi Arabia announced hours earlier that the writer died during a “fistfight” in its consulate, the AP reports.

“The critical reaction by Numan Kurtulmus, deputy head of the Justice and Development Party, suggested that Turkey… was not prepared to go along with the Saudi version of what happened to the writer…. He also said that Turkey would share its evidence of Khashoggi’s killing with the world and that a ‘conclusive result’ of the investigation is close.”

Reuters notes that Saudi officials “provided no evidence to support its account of the circumstances that led to Khashoggi’s death.”

CNN’s Chris Cuomo invited Rep. Greg Gianforte (R-MT) to body slam him after President Trump praised the Republican congressman at a rally this week for assaulting a reporter.

“Here we have a situation where the president goes to Montana and praises again a Republican congressman for body-slamming a reporter, and we’re supposed to be the mob? Give me a break.”

Nate Silver: “The fundraising numbers are so good for Democrats — and so bad for Republicans — that it’s hard to know quite what to make of them. From a modeling standpoint, we’re extrapolating from years in which fundraising was relatively even, or from when one party had a modest edge, into an environment where Democrats suddenly have a 2-1 advantage in fundraising in competitive races. Moreover, this edge comes despite the fact that a large number of these competitive races feature Republican incumbents (incumbents usually have an easier time raising money than challengers) and that most of them are in red terrain.”

“If Democrats beat their projections on Nov. 6 — say, they win 63 House seats, equalling the number that Republicans won in 2010, an unlikely-but-not-impossible scenario — we may look back on these fundraising numbers as the canary in the coal mine.”

“That data, plus Democrats’ very strong performances in special elections, could look like tangible signs of a Democratic turnout surge that pollsters and pundits perhaps won’t have paid enough attention to. Right now, in fact, the polls are not showing a Democratic turnout advantage.”

Paul Kane: “The House is undergoing one of the most significant shake-ups in power since the Republican revolution of 1994, no matter who wins the majority in next month’s midterm elections.”

“After capturing the House for the first time in 40 years, Republicans literally had no one on their side in 1995 who had ever served in the majority and had to learn on the fly, leading to some critical stumbles.”

“More than 70 lawmakers who took the oath in January 2017 have already either resigned from office, decided to not run for reelection, lost in primaries or are running for another office. Add 30 House incumbents running for reelection in toss-up races, and it potentially could be a historically large freshman class.”

Buoyed by the backlash against President Donald Trump and the anger of women voters, House Democrats are eyeing key pickup opportunities all around the country. Here are 15 of them: https://t.co/F4oaYM8m38

New York Times: “Republican leaders are increasingly worried that their candidates for governor and Senate are in political trouble across Michigan, Pennsylvania, Minnesota and other states that the party prizes, and that the difficulties could spill into House races that the G.O.P. needs to win in November to keep control of the chamber.”

“Their concerns also extend to Democratic-leaning states like California, Illinois and Virginia, where top-of-the-ticket Republicans are running well behind in polls — allowing Democrats to focus millions of dollars of spending as well as campaign time and turnout efforts in hotly contested House districts in hopes of knocking off G.O.P. incumbents.”

Dan Balz: “If you haven’t looked up recently, President Trump is everywhere. He is campaigning across the country at a frenetic pace. His White House has clamped down on news briefings, but he is giving interviews by the bushel. He is gaggling seemingly nonstop with reporters. He can’t stop talking.”

“These days have begun to feel like those in the last weeks of the 2016 presidential campaign, when Trump displayed more energy and stamina that rival Hillary Clinton, showing that he was prepared to take risks with his schedule and even toss in a head fake or two. He knew the electorate and the states he needed to win and went after them relentlessly. He’s doing the same today.”

“No president in modern memory has done what Trump is doing right now. Despite an approval rating that has been underwater since the start of his presidency, he has chosen to make the coming midterm elections all about him. Not that they weren’t already, but few presidents have so willingly personalized a midterm the way this one has. It’s another example of Trump as rule-breaker in chief.”

Employees at Sinclair Broadcast Group, the largest owner of television stations in the U.S., say that the company orders them to air biased political segments, and that it feeds interviewers questions intended to favor Republicans, NYer reports. https://t.co/D5lCMzceeO

CNN: “One suburban Georgia county has become a flashpoint for concerns over voter suppression for rejecting hundreds of mail-in absentee ballots weeks before Election Day.”

President Trump slammed migrants who want to come to the United States, the Washington Post reports.

Trump claimed “cuckoo” Democrats want to give illegal immigrants the right to vote, along with “free welfare, free health care, and free education” and a luxury car, like a “Rolls-Royce, made not in America, so I hope that’s not what we do.”

Josh Hawley (R) has criticized Sen. Claire McCaskill (D) repeatedly “for using a private plane to travel around Missouri. But the Republican Senate hopeful isn’t above taking a ride in a private plane himself,” Politicoreports.

“Hawley received an in-kind contribution of $5,225 for a charter flight in September on a plane owned by lobbyist Travis Brown and his wife, according to public records. Hawley attended a West Virginia fundraiser on that day, social media posts show, before returning to Springfield, Missouri that night – and posting a Facebook video of him driving into the city for a rally with President Donald Trump the next day.”

David Leonhardt: “If Republicans do manage to keep both chambers of Congress, it would cause a political shock. So far, much of the speculation has focused on what a Democratic House takeover might mean — attempts to rein in Trump’s executive actions, subpoenas, investigations, maybe even impeachment. But it’s important to understand that a Republican victory would also change Washington.”

“It would be validation for Trump, who could then brag that he had defied the experts once again. It would mean he had outperformed Barack Obama, Bill Clinton, Ronald Reagan, Lyndon Johnson and Harry Truman, all of whom suffered drubbings in the first midterm election of their presidency. It would embolden Trump to push even harder toward the America he wants — where corporate oversight is scant, climate change is ignored, voting rights are abridged, health care is a privilege, judicial independence is a fiction and the truth is whatever he says it is.”

With defeat in Texas likely, it's becoming increasingly clear that Beto O'Rourke has a back-up plan: the 2020 Democratic presidential nomination. https://t.co/mWSAaupDll pic.twitter.com/U1goiaNkBc

“Special counsel Robert Mueller’s investigation is scrutinizing how a collection of activists and pundits intersected with WikiLeaks, the website that U.S. officials say was the primary conduit for publishing materials stolen by Russia,” the Wall Street Journal reports.

“Mr. Mueller’s team has recently questioned witnesses about the activities of longtime Trump confidante Roger Stone, including his contacts with WikiLeaks, and has obtained telephone records.”

Alaska Gov. Bill Walker (I) announced he is dropping his bid for re-election, and is endorsing Mark Begich (D) against Mike Dunleavy (R), the Anchorage Daily News reports.

Walker made the announcement three days after former Lt. Gov. Byron Mallott (I) stepped down from both his office and the re-election campaign over unspecified “inappropriate comments” he made to a woman.

Said Walker: “In the time remaining, it has become clear we cannot win a three-way race. The decisions was made that at this point, Begich has the better odds. Alaskans deserve a competitive race and Alaskans deserve a choice other than Mike Dunleavey.”

More than 7,000 people have died crossing the U.S.-Mexico border in the past two decades. @ievaju shares what she learned as a volunteer EMT on both sides of the wall: https://t.co/HKnDliw7qS

“Democrats have yet to win a House majority and Nancy Pelosi’s return as speaker is by no means certain, but already she has one eye on the exits,” the Los Angeles Times reports.

Said Pelosi: “I see myself as a transitional figure. I have things to do. Books to write; places to go; grandchildren, first and foremost, to love.”

“By implicitly limiting her time as speaker, Pelosi could ease the pressure to stand aside by signaling her willingness for a new and younger generation of leaders to take over sooner rather than later.”

“After President Trump’s popularity on social media helped propel him to an upset victory in 2016, Democrats vowed to catch up. Two years later, their efforts appear to be paying off. A New York Times analysis of data from the Facebook and Instagram accounts of hundreds of candidates in next month’s midterm elections reveals that Democrats — and especially Democrats running for House seats — enjoy a sizable national lead in engagement on the two influential platforms.”

There’s one more reason O’Rourke should represent Texas in the U.S. Senate: He would help to serve as a check on a president who is a danger to the republic. Cruz is unwilling to take on that responsibility. Indeed, the man who delighted in calling the Texas senator “Lyin’ Ted” all through the 2016 presidential campaign, who insulted Cruz’s wife and his father, is bringing his traveling campaign medicine show to Houston next week to buoy the Cruz campaign. The hyperbole, the hypocrisy and the rancorous hot air just might blow the roof off the Toyota Center.

While the bloviations emanate from the arena next week, imagine how refreshing it would be to have a U.S. senator who not only knows the issues but respects the opposition, who takes firm positions but reaches out to those who disagree, who expects to make government work for Texas and the nation. Beto O’Rourke, we believe, is that senator.