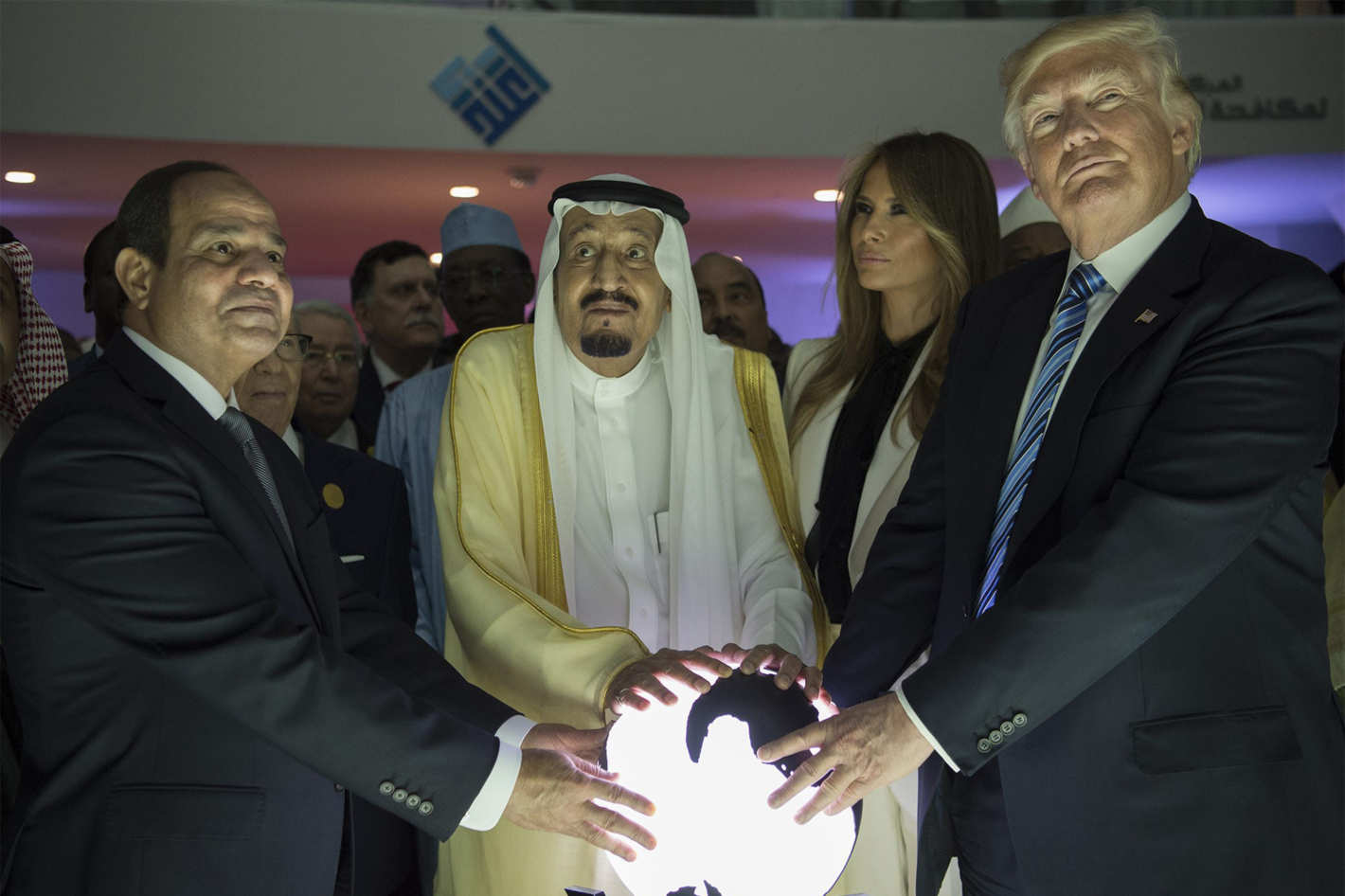 THE SAUDI-TRUMP COVER UP OF A MURDER GARNERS REPUBLICAN ACCOMPLICES.  On Thursday evening, Donald Trump went to Montana to make jokes about assaulting journalists and the rally crowd responded by laughing and making threats against the reporters on hand at the event. If Trump and his followers seemed particularly cruel … that’s exactly where the whole Republican Party is going. Because even as the evidence piles up that Washington Post columnist Jamal Khashoggi was brutally murdered inside the Saudi consulate on orders from crown prince Mohammed bin Salman, Republicans are planning their response — to be accomplices to the Sauder Murder Prince by smearing Khashoggi.

“A cadre of conservative House lawmakers allied with President Trump has been privately exchanging articles from right-wing outlets that depict Khashoggi as allied with terrorists — false and distorted claims that have begun to flare into public view as conservative media figures have amplified them,” the Washington Post reports.  “Khashoggi, a dissident journalist, is believed to have been killed and dismembered by Saudi operatives.  The purpose of the campaign is to make the gruesome dismemberment of the US resident acceptable, make Saudi actions ugly but necessary, and most of all to make Trump’s continued refusal to speak out against bin Salman acceptable.

Meanwhile, according to the New York Times, “[i]n conversations with allies, the president has begun to distance himself from Prince Mohammed, 33, saying he barely knows him. And he has played down the relationship that Mr. Kushner has cultivated with the Saudi heir.”

Saudi royals have finally settled on the lie they wish to tell the world about the brutal bone saw murder of U.S. journalist Jamal Khashoggi. Yes, that’s right. They will now admit he is dead, but here is their story, in a nutshell, via CBS News.

They report: “Discussions that occurred between the reporter Jamal Khashoggi and the people that were questioning him while he was in the Saudi consulate in Istanbul led to an argument and fighting with hands which led to his death.”

TRUMP THREATENS MILITARY ACTION AGAINST MEXICO, LIES ABOUT DEMOCRATS.  President Trump warned that he may take military action to stop immigrants from crossing the southern border into the U.S. if Mexico does not take action to stop the “onslaught,” The Hill reports.

Trump also blamed Democrats for the “assault on our country,” adding that illegal immigration is “far more important” to him than trade or the newly-negotiated trade pact with Mexico and Canada.

Hey, everyone. This is important. In a Friday news dump, the Justice Department just issued a document saying Putin's information war on America "continues to this day" and is targeting the 2018 midterms. Please read and pass on. https://t.co/3wzVXrPsTd

“The Justice Department on Friday charged a Russian woman for her role in a conspiracy to interfere with the 2018 U.S. election, marking the first criminal case prosecutors have brought against a foreign national for meddling in the upcoming Midterms,” the Washington Post reports.

“The charges against Elena Khusyaynova came just as the Office of the Director of National Intelligence warned that it was concerned about ‘ongoing campaigns’ by Russia, China and Iran to interfere with the upcoming Midterm elections and even the 2020 race — an ominous warning that comes just weeks before voters head to the polls.”

DEMS POISED TO RECAPTURE THE MIDWEST.   “Democrats are poised to chip away at Republican statehouse dominance in next month’s midterm elections, with wins appearing likely in some of the biggest states in the industrial Midwest,” Politico reports.

“But aside from those contests, the gubernatorial map remains remarkably fluid deep into the fall campaign. Strategists and operatives in both parties say the races in politically consequential states like Florida, Georgia, Iowa, Nevada, Ohio and Wisconsin — all of them currently led by GOP governors — are still neck-and-neck.”

Can change wait? Read @RyuSpaeth on the campaign slogan that captures the promise and impatience of today's Democratic Party. https://t.co/qOmtVnwW16 pic.twitter.com/fLZTtIXpj0

RUSSIAN OLIGARCH SET UP SHELL US CORPORATION BEFORE THE TOWER TREASON MEETING.  “A Russian billionaire who orchestrated the June 2016 Trump Tower meeting formed a new American shell company a month beforehand with an accountant who has had clients accused of money laundering and embezzlement,” the Guardian reports.

“The billionaire, Aras Agalarov, created the US company anonymously while preparing to move almost $20m into the country during the time of the presidential election campaign… Agalarov’s previously unreported shell company is another example of intriguing financial activity around the time of the Trump Tower meeting.”

Trump’s boosters in the conservative movement work furiously to try to convince the marks that they’re in on the con. https://t.co/THBpDjXcBN

MUELLER IS PRESSING MANAFORT ON ROGER STONE INFO.   Special counsel Robert Mueller’s team has been asking its latest cooperating witness, Paul Manafort, about former Trump associate Roger Stone, ABC News reported.   According to multiple sources familiar with the matter who spoke to ABC News, Mueller’s interests in Stone are tied to his contacts with WikiLeaks founder Julian Assange and his leak of Hillary Clinton’s campaign emails.

Manafort and Stone have been longtime friends and former business partners. It’s unclear if Manafort has shared any information about Stone with Mueller’s team, but Stone told ABC he’s “confident” Manafort is “aware of no wrong doing on my part during the 2016 campaign, or at any other time, and therefore there is no wrongdoing to know about.”  “Narratives to the contrary by some in the media are false and defamatory,” Stone said.

Republicans are running away from the economy. @alex_shephard on Trump & co.'s divisive campaign message: https://t.co/rp70pAtcDC pic.twitter.com/GbcS9yL0tv

TRUMP’S MEDIA BLITZ.   ABC News: “Forget all that ‘the enemy of the people’ talk, Donald Trump has been spending a remarkable amount of time with reporters lately. In fact, ABC News can find no comparable time period when a president of the United States has taken more questions from the news media than Donald Trump has over the past 11 days.”

“ABC News estimates the president has taken nearly 300 questions from reporters in the past 11-day span alone.”

Kamala Harris wants to give working families as much as $500 a month in cash. Me on the Democrats' Trump-sized tax plans: https://t.co/ZYPeX0N0Rp

GOP SENATORS PUSH THROUGH MORE JUDGES.  “A handful of Republican senators did something unusual on Wednesday: With the Senate not even in session, and no Democrats in sight, they convened the Judiciary Committee to advance a half-dozen of Donald Trump’s judicial nominees,” Politico reports.

“For Republicans, there’s nothing that matters more. They aren’t pitching a big visionary agenda to persuade voters to return them to power next year — there’s only passing mention in the midterms of repealing Obamacare, and little talk of making Trump’s border wall a reality. It’s all about the judiciary. Senate Majority Leader Mitch McConnell has given every indication that his primary focus — through Election Day and, assuming Republicans still control the Senate, in the two years to follow, will be the ongoing reshaping of the courts.”

Are you certain to vote?

“Harris, a first-term senator, would still face significant obstacles in each of those states. But as a black woman who has also won statewide elections in California — where the black proportion of the electorate is relatively small — Harris could be well positioned to compete in both the Southeast and the West.”

“Three prominent female Democrats all but openly began running for president this week, taking their most active steps yet to challenge President Trump and claim leadership of a movement of moderate and liberal women that has come to define their party during the 2018 elections,” the New York Times reports.

“Sen. Kirsten Gillibrand (D-NY) campaigned in the early primary state of New Hampshire on Thursday, while Sen. Kamala Harris (D-CA) was poised to visit similarly crucial South Carolina and Iowa. And Sen. Elizabeth Warren (D-MA) left little doubt about her intentions when she released a genetic test indicating she has Native American ancestry — a move to blunt Mr. Trump’s taunts alleging she had mischaracterized her heritage.”

The shouting match between John Kelly and John Bolton actually opens a window on the big, festering lie at the very core of Donald Trump's worldview.

TRUMP CLOSES WITH CONSPIRACY THEORIES AND VIOLENCE.  First Read: “In the final days of the 2016 presidential election, Donald Trump campaigned on brute force… And history appears to be repeating itself in 2018, at least in how Trump was campaigning last night in Montana on conspiracy theories, Hillary Clinton, violence and brute force.”

“And like in 2016, this pure brute force from Trump could work, because there is no equal response from Democrats. If the next 18 days are going to be like last night, Trump’s message will be the dominant one. Are Democratic TV ads on health care, bipartisanship and ‘check and balance’ enough to counter Trump on the campaign trail?”

“If you woke up from a coma and watched Trump’s rally in Montana last night, you’d conclude that the president and his party were off the rails. Instead, given the polling and Senate momentum we’ve seen for the GOP over the past month, it appears that Trump is actually putting the train back on track.”

RUNNING AGAINST PELOSI AND CLINTON WON’T WORK.   Amy Walter: “This election — like every midterm before it — is a referendum on the president. Democrats don’t need to remind their voters of this — their voters have been ready to rebuke Trump since early 2017. Republicans, however, are taking a different tact on dealing with a polarizing president of their own party than previous candidates did under similar circumstances. They aren’t trying to show their independence from Trump – as many Democrats unsuccessfully did with an unpopular Obama in 2010 or Republicans did with an unpopular Bush in 2006. Instead, Republicans are trying to win back their formerly committed GOP voters by stressing the loyalty their Democratic opponent shows to Pelosi.”

“Ultimately, fear of the future unknown is tougher to sell than fear of the present. Which makes the Pelosi-fear-factor ads a tough sell. I still think that Trump’s approval rating in a GOP-held district is a better gauge of whether it is vulnerable, than Pelosi’s image in that district. And, instead of weakening Pelosi, these ads may actually embolden her bid for Speaker. If Democrats win the House, Pelosi will be able to crow to her members — even those who said they’d vote against her — that she was the topic of more ads than Trump — and still won.”

.@TomSteyer now has a list of 6M active names, with info ranging from voter records to Twitter accounts. And if Dems win the House, he’ll activate it to immediately start pressuring new members to back impeachment. I got a tour inside what he’s built: https://t.co/C3TlA0Gu2w

DEMOCRATS AND TRUMP BUILD WAR CHESTS, WHILE REPUBLICANS STRUGGLE.  “Democratic candidates running for Congress this year collectively raised more than $1 billion for their campaigns — a record-shattering sum that highlights the party’s zeal to retake the House and Senate and underscores the enormous amount of money flowing into the midterm races,” the Washington Post reports.

“The $1.06 billion raised through the end of September surpasses the nearly $900 million collected by Republican candidates for Congress in 2012 — previously the largest haul registered by a single party by this point in the election cycle.”

New York Times: “Reports filed this week show that President Trump sits atop a sophisticated data-driven fund-raising machine that has already brought in more than $106 million — a majority of which came from small donors, with none coming from Mr. Trump’s own pocket — and has spent more on his ‘Make America Great Again’ hats, $2 million, than his 2016 effort had spent on the entire campaign in its first report.”

“Even after the costly investments in digital advertising, data analytics and other tools of modern campaigning, the three committees that make up Mr. Trump’s campaign apparatus entered this month with a remarkable $47 million in the bank.”

“But the stockpiling has prompted grumbling among some Republican strategists, who contend — mostly in private — that the cash would be better allocated to the party’s at-risk congressional candidates, many of whom are being drastically outraised by their Democratic opponents.”