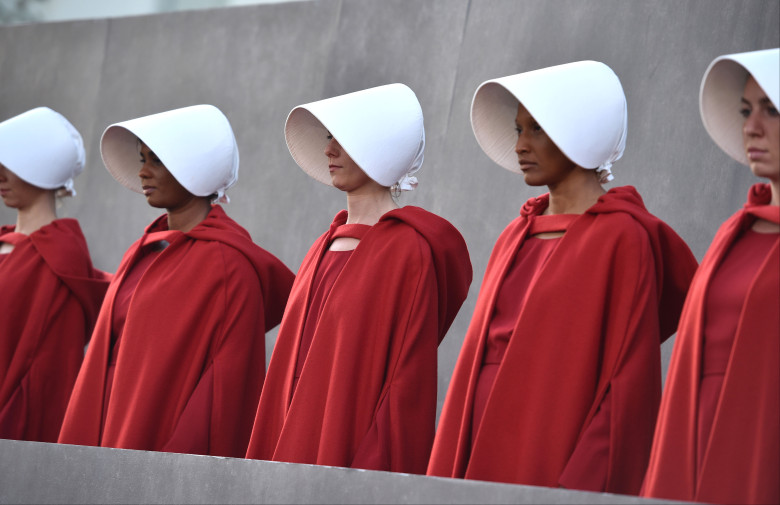 In the Handmaid’s Tale there are the handmaids, the wives and the white men. If you’ve never read the book (or watched the series) you really need to. I read the book years ago and am watching the series now. I am halfway through season 2 and had to take a break. It felt too real.

For those not familiar with the story here’s a synopsis (If you’ve read the book, go ahead and skip this part):

Beginning with a staged attack that kills the President and most of Congress, a radical political group calling itself the “Sons of Jacob” and exploiting religious ideology that closely resemble some traits of Christian fundamentalism (and especially of Christian Reconstructionism) launches a revolution and suspends the United States Constitution under the pretext of restoring order.[7] They quickly abolish women’s rights, largely attributed to financial records being stored electronically and labelled by sex. The new regime, the Republic of Gilead, moves quickly to consolidate its power, including overtaking all pre-existing religious groups, including traditional Christian denominations, and reorganize society along a new militarized, hierarchical model of Old Testament-inspired social and religious fanaticism among its newly created social classes. In this society, human rights are severely limited and women’s rights are strictly curtailed. For example, women are forbidden to read, and anyone caught in homosexual acts would be hanged for “gender treachery”.

The story is told in the first person by a woman called Offred. The character is one of a class of women with healthy reproductive systems, in an era of declining birth rates owing to increasing infertility. These women are forcibly assigned to produce children for the ruling class and are known as “handmaids”, based on the biblical story of Rachel and her handmaid Bilhah. Offred describes her life during her third assignment as a handmaid, in this case to Fred Waterford (referred to as “The Commander”). Interspersed with her narratives of her present-day experiences are flashback discussions of her life from before and during the beginning of the revolution, when she finds she has lost all autonomy to her husband, their failed attempt to escape to Canada, and finally her indoctrination into life as a handmaid by government-trained women called “Aunts”.

Offred describes the structure of Gilead’s society, including the different classes of women and their lives within the new theonomy. The women are physically segregated by colour of clothing—blue, red, green, striped and white—to signify social class and assigned position, ranked highest to lowest. The Commanders’ wives are dressed in blue, handmaids in red, Marthas (cooks and maids) in green. Striped clothing is for all other women (called “Econowives”) who essentially do everything in the domestic sphere. Young, unmarried girls are dressed in white.

The Commander is a high-ranking official in Gilead. Although his contact with Offred is supposed to be limited to “the ceremony”, a ritual of rape intended to result in conception and at which his wife is present, he begins an illegal relationship with Offred. Secret meetings occur in his study, which the Commander’s wife is not permitted to enter. The room is filled with books and is considered a private place for the man of the house. During these meetings, he tries to earn her trust by talking and playing board games such as Scrabble with her. He also lets and watches her read, another offense, as women are not permitted to read and write. The Commander offers her contraband products, such as old (1970s) fashion magazines and cosmetics. Finally, he gives her lingerie and takes her to a government-run brothel called Jezebel’s. This brothel is meant to add variety to men’s sex lives which, as claimed by the Commander, is necessary.

Okay, everybody got it? The Handmaid’s Tale is about a theocratic society where white men control everything, especially women, but are free to break their laws because ‘variety to men’s sex lives is necessary.’ Sound familiar? The handmaid’s are raped every month by these men in a ceremony with their wives present. Most are raped by these men outside the ceremony. ‘Cause, you know, variety.

But it’s the wives that fascinate me in this story. Whereas the handmaids’ lives aren’t reality (yet) and the men’s lives are mostly fantasy (cause, ya know, this does exist now in certain religious circles and domestic abuse situations) readily found in many spaces on the internet, talk radio, and Republican speeches, it’s the wives story that’s most closely based in current reality. During the revolution in the story, the wives fought alongside their husbands, wrote best selling books in defense of the patriarchy, appeared on talk shows, were successful, etc. only to find life very different once their vision was realized. It’s all fun and games until what you preach becomes what you live.

White women always consider ourselves the exception. We are conditioned to believe we are some sort of prize, that what happens to us matters (see: any missing blonde, white girl), that white men have our back. And yet, we were surprised when the WSJ made a rape joke about Susan Collins’ vote for Kavanaugh. White women better wake up and acknowledge our privilege only exists at the hands of white men; that it can be pulled at any minute. Kinda like the way a madonna morphs into a slut when a man decides it so.

I look at my Republican women friends and it amazes me how what they say when their husbands aren’t around is so different than what they say when they are. Abortion is the biggest secret. I’ve stopped being stunned by these women lying to their husbands about their, and their daughter’s, abortions. In fact, I know more “pro-life” women who’ve had abortions than pro-choice women. That probably has a lot to do with being anti-birth control.

Which brings us back to the road we’re on. It’s easy to see what’s coming in regards to women’s reproductive rights. States will pass laws that make abortion unavailable. These cases will make their way to the Supreme Court, where pathological liar, Brett Kavanugh, will uphold these laws. The end goal will be outlawing abortion in these states.

Then what happens? First, poor women will be subject to forced birth. They simply do not have the money or time to travel to a pro-choice state. BTW, the argument that women can travel to another state for their abortions is a quite popular argument right now. It’s also a lie.

Sure, that will be what happens in the short term, but it won’t be the endgame. How could it? If you believe abortion should be outlawed (and many of this crowd think women controlled birth control should be as well. Condoms, for some reason, are a-okay!) then the next step is to stop women from leaving your state for, what you consider, an illegal act.

There will be no exceptions for abortion. Years ago, everyone believed Republicans when they said they supported abortion in the cases of rape and incest. As we’ve seen, they no longer believe that. Hell, they don’t even believe rape happens. Remember “legitimate rape” or “turning lemons (pregnancy from rape) into lemonade, or how pregnancy from rape was “God’s plan”? We need to start believing what these people say.

Trump and Republicans believe there should be punishment for women who have abortions. If you believe them, and you should, then tracking pregnant women is the only way to accomplish this.

We already know that Republicans are going down the gender war path – where men are the true victims and women are the villains who lie to destroy innocent men’s lives. It must be so time consuming for these people to visit all those falsely accused men in prison. I don’t know one man who’s been falsely accused. Hell, I don’t know one man who’s been publicly accused at all. Not one man who’s life has been destroyed. However, I do know men who have raped/sexually assaulted women and gotten away with it. #MeToo

We also know exactly what they want to do to women.

It’s not a coincidence that the chant “Lock Her Up!” now applies to Diane Feinstein.

Expect the “her” in that statement to keep expanding.

16 comments on “On The Road To Gilead”