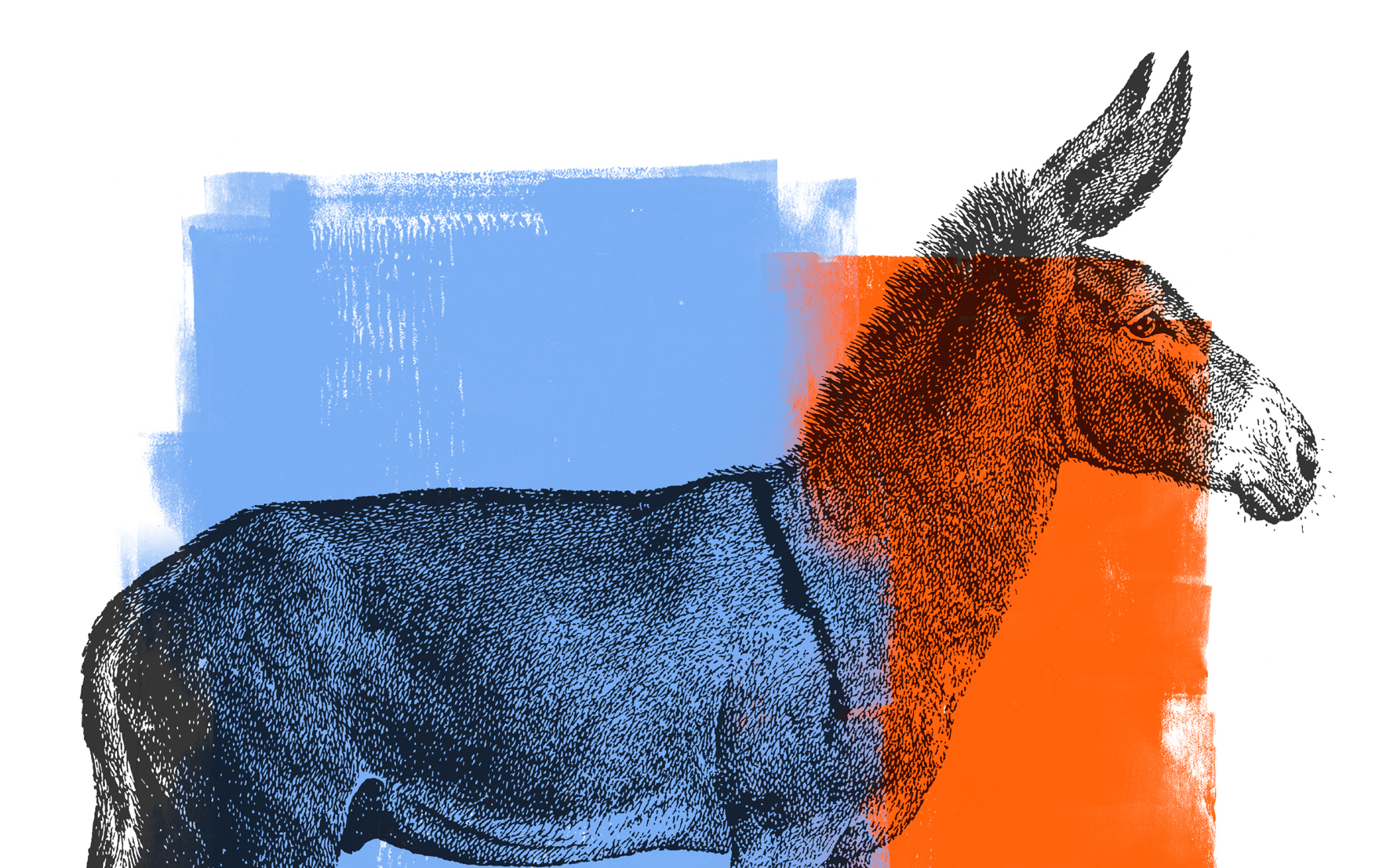 A new CNN poll finds that 51% of Americans oppose Brett Kavanaugh’s confirmation to the Supreme Court, up from 39% who opposed it in early September, after his initial confirmation hearing but before accusations of sexual misconduct emerged.

Support for Kavanaugh’s confirmation has merely inched up, by contrast, from 38% backing him in early September to 41% now.

Reuters: “Earlier this year, [Republican Congressman] Brat’s seat was considered safe. But if a so-called ‘blue wave’ materializes, it would roll through a district like his, which includes pockets of suburban voters who increasingly have been turning away from Republicans.”

“Democrats have poured resources not only into Brat’s district, but others that have come onto their battleground list, in places such as Pennsylvania, North Carolina, Southern California and other parts of Virginia such as the district currently represented by Republican Scott Taylor.”

Bad news for Republicans in a Washington Post-Schar School survey of 69 battleground House districts. Republicans currently hold 63 of the districts polled compared with just six for Democrats, but the poll finds a four-point lead for Democrats, 50 percent to 46 percent. If that doesn’t sound like much, consider this: “in 2016 these same districts favored Republican candidates over Democratic ones by 15 percentage points, 56 percent to 41 percent.”

WAS A RUSSIAN BANK TALKING TO THE TRUMP CAMPAIGN?  The New Yorker reports on a team of computer scientists sifting through records of unusual web traffic in search of a connection between a Russian bank and Donald Trump’s 2016 presidential campaign.

“Examining records for the Trump domain, Max’s group discovered D.N.S. lookups from a pair of servers owned by Alfa Bank, one of the largest banks in Russia. Alfa Bank’s computers were looking up the address of the Trump server nearly every day. There were dozens of lookups on some days and far fewer on others, but the total number was notable: between May and September, Alfa Bank looked up the Trump Organization’s domain more than two thousand times.”

“Only one other entity seemed to be reaching out to the Trump Organization’s domain with any frequency: Spectrum Health, of Grand Rapids, Michigan. Spectrum Health is closely linked to the DeVos family; Richard DeVos, Jr., is the chairman of the board, and one of its hospitals is named after his mother. His wife, Betsy DeVos, was appointed Secretary of Education by Donald Trump. Her brother, Erik Prince, is a Trump associate who has attracted the scrutiny of Robert Mueller, the special counsel investigating Trump’s ties to Russia.”

RUSSIAN-TRUMP COLLUSION CONTACT KILLED BY PUTIN.  “A Russian official accused of directing the foreign operations of Natalia Veselnitskaya, the lawyer who met senior Trump campaign officials in 2016, has plummeted to his death in a helicopter crash,” the Daily Beast reports.  “Russian Deputy Attorney General Saak Albertovich Karapetyan was exposed in a Swiss court this year for a plot to enlist another nation’s law-enforcement official as a double-agent for the Kremlin.”

RUSSIAN OLIGARCH CONNECTED TO TRUMP COLLUSION HAS HIS PROPERTY SEIZED.  “A sprawling mansion on the Upper East Side has been frozen as part of a hard-core battle between the US government and Russian oligarch Oleg Deripaska,” the New York Post reports.

“US officials say Deripaska, an aluminium billionaire, is close both with Russian mob leaders and Russian president Vladimir Putin — and that he is on the sanctions list because he is allegedly involved in murder, money-laundering, bribery and racketeering.”

“Deripaska also had President Trump’s ex-campaign manager Paul Manafort — who has been convicted of crimes including money-laundering and who is cooperating with US special counsel Robert Mueller’s Russia probe — on his payroll for years.”

Collins' speech — saturated in ugly misdirection and bad faith — was the perfect capstone to the Party of Trump's handling of this whole affair.

Yet for all that, this fight was worth having. And it continues.

WARREN SPENDING HEAVILY ON NATIONAL FACEBOOK ADS.  Sen. Elizabeth Warren (D-MA) “has emerged this year as the third-highest spender on digital ads — behind only President Trump and Beto O’Rourke, a Texas Democrat who is running in the country’s highest-profile Senate race,” the Boston Globe reports.

“In the last two weeks alone, Warren has run 401 separate digital ads on Facebook, seen by as many as 10 million people. These aren’t all geared for Massachusetts: Her ads are getting four times as many eyeballs in other states.”

TRUMP’S NEXT FOUR WEEKS.  First Read: “A surprising development in the Kavanaugh-Ford story was how it overshadowed President Trump. Yes, he mocked Ford, and he gave that bizarre, hour-long news conference at the UN. But he wasn’t the main story — the way he’s been most of his nearly two years in office. Remember this about 2016: Not only did Hillary-Comey dominate the last two weeks of that presidential election, but it also coincided with Trump being incredibly disciplined during that stretch. Can he do it again?”

ROSENSTEIN’S WILD RIDE ON AIR FORCE ONE. Deputy Attorney General Rod Rosenstein and President Trump “planned to travel to Florida together on Air Force One Monday morning, a week and a half after the two were scheduled to discuss remarks Mr. Rosenstein had made about the president’s fitness for office and an offer to secretly tape conversations with him,” the New York Times reports.  In the days following those revelations, Mr. Rosenstein told senior White House officials, including John F. Kelly, Mr. Trump’s chief of staff, that he wished to resign.

KAVANAUGH SUPPORTERS THANK AVENATTI.   “Michael Avenatti was a hot conversation topic Saturday night at Trump Hotel, where administration officials gathered for happy hour with advisers from the outside groups who poured money and energy into confirming Brett Kavanaugh to the Supreme Court,” according to Jonathan Swan.  “At one point in the evening, a senior person at one of the outside groups joked that Avenatti might have been on the Republican payroll.”

Said one source: “You guys put Avenatti up to it, right?”

LOOK AT WHAT YOU MADE HER DO:  “In a stunning turnaround from her refusal to discuss anything related to politics, Taylor Swift revealed whom she’s voting for in the 2018 midterms,” the Washington Post reports.

“The pop megastar, who just wrapped up a 40-date stadium tour across the country, posted a long Instagram caption Sunday night. In it, Swift, who is registered to vote in Tennessee, gave a detailed explanation about why she’s voting for Democrats Phil Bredesen for Senate and Jim Cooper for the House.”

"The Soros caricature has extra resonance in the battle to redefine the modern GOP," says @MattWelch: https://t.co/NKh2cKl6rO

Pelosi began her release by writing that Kavanaugh’s confirmation “has wounded the very soul of justice in our country” and commending the “dignity and bravery” of Christine Blasey Ford.

RICE CONSIDERS SENATE RUN IN MAINE.  Susan Rice, a former national security adviser to President Obama, said that she will decide after the November elections whether to launch a bid to unseat Sen. Susan Collins (R-ME), claiming the lawmaker has “betrayed women across this country,” the Washington Post reports

Susan Collins’ 2020 challenger already has a $3 million campaign fund, thanks to her vote on Kavanaugh https://t.co/nBKjzIqije

MCCONNELL TO VIOLATE HIS OWN GARLAND RULE IF GOP RETAINS SENATE.  Talking Points Memo: “Senate Majority Leader Mitch McConnell (R-KY) would not commit to holding open any Supreme Court vacancy under President Trump created in a presidential election year, the way he blocked President Obama’s nominee Judge Merrick Garland, ostensibly because the seat had opened after the presidential primaries had started.

“Who controls the Senate when you have a vacancy that close to an election makes a big difference,” McConnell said at a press conference Saturday after the Senate narrowly confirmed to the Supreme Court Judge Brett Kavanaugh. “There’s not a doubt in anybody’s mind, I am sure, that if the shoe was on the other foot in 2016, and it had been a Republican president making the nomination to a Democratic Senate, it wouldn’t have been filled.”

Josh Marshall: “In little more than two years, the theft of the Garland seat and the tainted 2016 election have together forced a massive redirection of the jurisprudential course of the country. Mitch McConnell shows up again and again in the process, first as the key driver of the theft of the Garland seat and second as a significant player blocking a bipartisan response to Russian intervention in the election. His fingerprints cover both events.”

MEDIA IGNORES TRUMP’S TAX CRIMES.  Media Matters: “Donald Trump rose to prominence and the presidency on the strength of his self-proclaimed mastery of The Art of the Deal. It was that business acumen, Trump claimed, that allowed him to turn a paltry loan from his father into a vast empire. But last week, The New York Times revealed that Trump was not the self-made billionaire he had claimed to be but rather the recipient of at least $413 million from his father, in part through tax schemes the paper described as “outright fraud.”

“The next day, perhaps in an effort to regain momentum, the Times republished its story in a separate section. But that morning, Meet the Press, This Week, Face the Nation, and Fox News Sunday — weekly talk shows that focus on politics and historically set the news agenda for the week — all completely ignored it.”

THE CORRUPTION OF THE GOP IS COMPLETE.  Jennifer Rubin: “The Republican Party’s Trumpization is complete. It’s not a conservative party, or a small government party or an anti-authoritarian party (to the contrary!). It has become the caricature of the left from days gone by — all power, no principle, dismissive of courtesy and reasoned persuasion. Anger, not ideas, is its animating force. We have a nativist party that views America not as a creedal nation, but as a white Christian nation that is diminished by immigrants and is threatened by outsiders. If it possesses any coherent philosophy, it is one of victimhood — which in turn justifies any and all bad behavior.”

“Four weeks from this Wednesday (the day after the midterm elections), sorry, will commence the lead-up to the 2020 presidential race. Any Republicans thinking of challenging President Trump because they recoil from the party of Trump is, I hate to break it to them, out of luck. The party wants the mocking cruelty, the attacks on the press and on women, the protectionism and the white nationalism. These things define it.”

FURTHER BLURRING THE LINE BETWEEN FOX NEWS AND THE GOVERNMENT.  “Months after leaving the White House, Hope Hicks will head to Fox to become its new chief communications officer,” CNBC reports.  “Hicks’ move represents a swap of sorts. After she left the White House, former Fox News executive Bill Shine took over a role similar to hers, as deputy chief of staff for communications.”