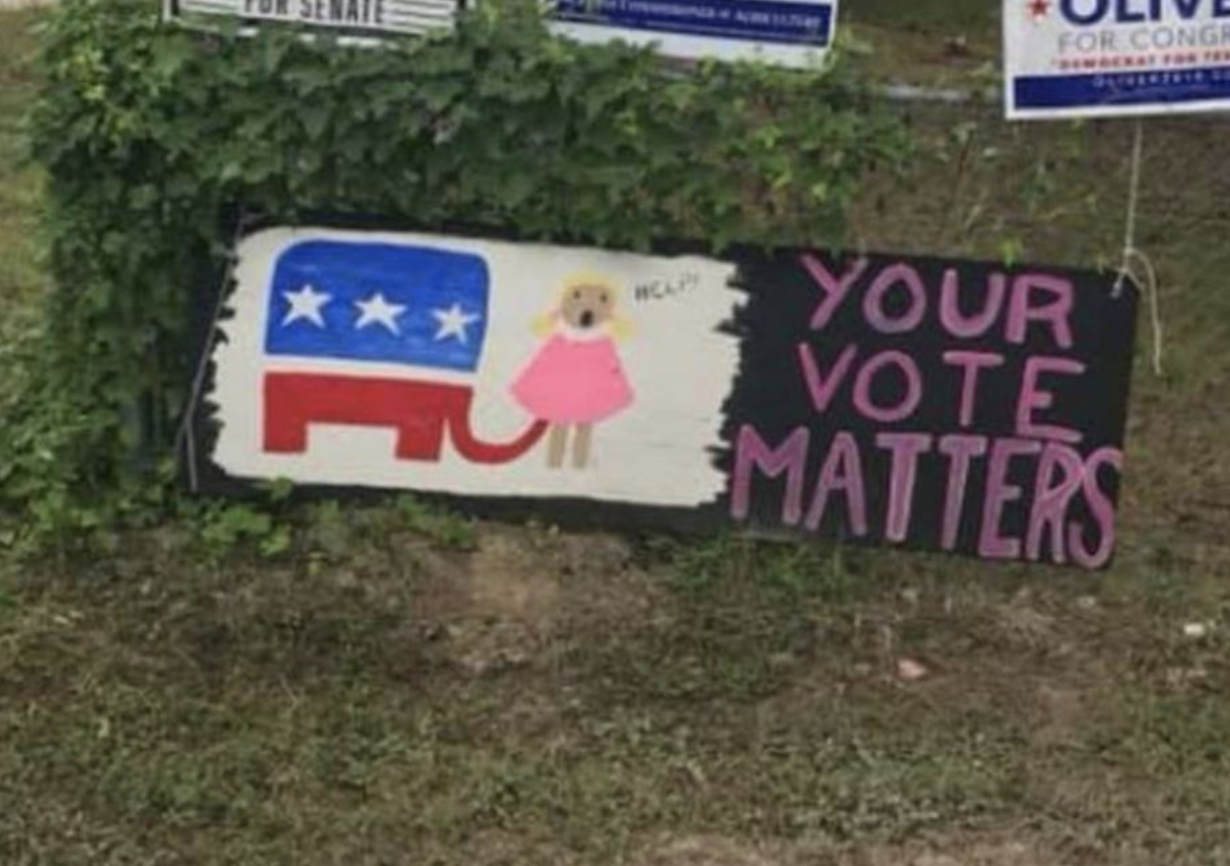 Aaron Blake: “Republicans face a difficult 2018 midterm election in about one month’s time. But on its eve, the GOP just secured its greatest amount of political power and leverage since at least the Great Depression.”

“The new, clear-cut 5-4 conservative majority on the Supreme Court replaces a more nominal 5-4 court, in which Republican appointee Anthony M. Kennedy served as a swing vote and sometimes sided with the court’s more liberal justices. Things can always change, but Kavanaugh is expected to be a much more reliable vote for conservative issues.”

“Assuming the court is more tilted toward the GOP going forward, that delivers the GOP the last vestige of power in Washington that had thus far eluded it. While justices are technically nonpartisan, experts say this is shaping up to be the first reliably conservative Supreme Court since at least the New Deal era more than 75 years ago. By some measures, the court was already more conservative than it was then — at least before high-profile decisions legalizing same-sex marriage nationwide and upholding Obamacare — and it’s likely to be even more so now.”

According to a source with direct knowledge, Chief of Staff John Kelly recently formed a small working group to start preparing for the possibility that Democrats will soon sic Congress' top investigators on Trumpworld. https://t.co/q03lCNq6YU

Jonathan Swan: “According to a source with direct knowledge, Chief of Staff John Kelly recently formed a small working group to start preparing for the possibility that Democrats will soon sic Congress’ top investigators on Trumpworld. Senior White House staff have an offsite weekend retreat scheduled for late October. The agenda is expected to include a discussion of investigations under a Democratic-controlled House, according to the source.”

“White House officials have been telling us for weeks they were worried that Kelly hadn’t been taking the threat seriously enough. This is the first time I’ve learned new information to suggest that they’re preparing.”

Wall Street Journal: “A veteran Republican operative and opposition researcher solicited and raised at least $100,000 from donors as part of an effort to obtain what he believed to be emails stolen from Hillary Clinton, activities that remain of intense interest to federal investigators working for special counsel Robert Mueller’s office and on Capitol Hill.”

“Peter W. Smith, an Illinois businessman with a long history of involvement in GOP politics, sought and collected the funds from at least four wealthy donors as part of the plan to obtain Mrs. Clinton’s stolen emails from hackers just weeks before election day in 2016.”

.@RadioFreeTom: “The Republican Party, which controls all three branches of government and yet is addicted to whining about its own victimhood, is now the party of situational ethics and moral relativism in the name of winning at all costs. So, I’m out.” https://t.co/D8s80niOq0

Frank Bruni: “But Graham is special. He really is. I can’t think of another Republican whose journey from anti-Trump outrage to pro-Trump obsequiousness was quite so illogical or half as sad, and his conduct during the war over Kavanaugh completed it. For the president he fought overtime, he fought nasty and he fought without nuance.”

”In so doing, he distilled our rotten politics — its transactional nature, its tribal fury, its hysterical pitch — as neatly as anybody in the current Congress does.”

Said Trump: “This is one of the reasons I chose him is because there is no one with a squeaky clean past like Brett Kavanaugh. We’re very honored that he was able to withstand this horrible, horrible attack by the Democrats.”

Trump also insisted women were “extremely happy” about Kavanaugh’s confirmation because they’re apparently relieved the men in their lives are less likely now to be accused of sexual assault.

President Trump explained that he mocked Christine Blasey Ford, the woman who accused Brett Kavanaugh of sexual assault, in an effort “even the playing field,” The Hill reports.

For anyone who missed it last week, the ⁦@nytimes⁩ reprints the extraordinary journalistic investigation of Trump's dubious tax schemes in today's print paper. A must-read by ⁦@DavidBarstow⁩ ⁦@susannecraig⁩ ⁦@russbuettner⁩ pic.twitter.com/g6KPF091bB

Said Collins: “I found Dr. Ford’s testimony to be heart-wrenching, painful, compelling, and I believe that she believes what she testified to.”

But she added: “I’m 100 percent certain that this did not happen.”

Must-watch: John Dickerson fact-checks Senate Majority Leader Mitch McConnell (R-KY) on Fact the Nationon his claim of a historical precedent for blocking Merrick Garland’s appointment to the Supreme Court during the 2016 presidential election.

McConnell got very angry when Dickerson pointed out that President Dwight D. Eisenhower, a Republican, named William Brennan to the court in 1956 by recess appointment just before that year’s presidential election. Brennan began serving immediately, and was formally nominated and confirmed the next year.

And a quality quote that Mitch will regret from Saturday:    “These things always blow over.”

Said one attendee: “This whole thing feels like a therapy session and Sen. Booker is the therapist.”

Its members resent women. They scorn women. They exclude women. They use women to maintain their grip on power. But they do not respect them. https://t.co/OBUaVx0hEk

Nate Cohn: “A favorable national environment, strong Democratic candidates and a wave of Republican retirements have combined to produce a long list of vulnerable Republican seats. But Republicans remain competitive in the districts that will decide control.”

“The sheer number of highly competitive districts means a wide range of possible outcomes. Democrats could win in a landslide, or Republicans could run the table and narrowly retain a majority. Both possibilities are evident in data collected from The New York Times Upshot/Siena College surveys in battleground districts.”

Dana Milbank and Susan Collins’ “declaration of cowardice.”  “After Sen. Susan Collins announced on the Senate floor Friday that she would cast her deciding vote to confirm Brett M. Kavanaugh, Senate Majority Leader Mitch McConnell (Ky.) rose to liken her to another Republican from Maine, Margaret Chase Smith, “the first member of the United States Senate to take on Joseph McCarthy . . . this demagogue and the tactics that he employed.”

“We are Republicans. But we are Americans first,” Smith said 68 years ago. “I don’t want to see the Republican Party ride to political victory on the Four Horsemen of Calumny — Fear, Ignorance, Bigotry and Smear.”

Many liberals instinctually shy away from anything that seems overly partisan. But that will be essential if American democracy is to survive the Trump era. https://t.co/akh3wdcTfO

Ruth Marcus on the poisoning of the Supreme Court.  ““The Supreme Court must never, never be viewed as a partisan institution,” Judge Brett M. Kavanaugh observed at the start of his testimony before the Senate Judiciary Committee.  That was Sept. 4, just over a month ago, but it feels like an eternity — before the country was convulsed by accusations of sexual assault against the Supreme Court nominee, now on the brink of becoming the nation’s 114th justice.

Before Kavanaugh’s volcanic, partisan attack on the Judiciary Committee’s proceedings as the product of “a frenzy on the left to come up with something, anything to block my confirmation.”  This is a dangerous, even scary, moment for the court — one in which Kavanaugh’s admonition against seeing the court in partisan terms seems laughably naive.”

Arwa Mahdawi on the system behind the men.  “If you are very clever and work very hard, you can achieve anything. We know this because successful people are always telling us so. They got where they are because of their work ethic: rich parents, the right connections and random chance had little to do with it.

See, as exhibit one, man of the moment Brett Kavanaugh. You know, the judge who really likes beer and seems to hate women having autonomy over their reproductive systems. When Kavanaugh appeared before a committee to defend himself against accusations of sexual assault, in between sniffles he argued that he has earned everything he has achieved, including his undergraduate place at Yale University. “I have no connections there,” he said. “I got there by busting my tail.”

Let’s move from Kavanaugh to an equally delightful master of the universe: Donald Trump. One of Trump’s favourite subjects of conversation is how he is a self-made billionaire who got to the big league off the back of his abnormally high IQ and a negligible $1m loan from dad. Which, by the way, he paid back with interest. I hate to call Trump a shameless liar, but evidence suggests his self-made schtick is fake news. An investigation by the New York Times found Trump actually received about $413m (£317m) in today’s money from his dad, most of which was from dubious tax dodges. You need to have a passion for alternative facts to square that with being “self-made”.”

Graham: "I think Dr. Ford was treated well. I think the roles were reversed: The slut whore drunk was Kavanaugh." pic.twitter.com/NuIEW2498i