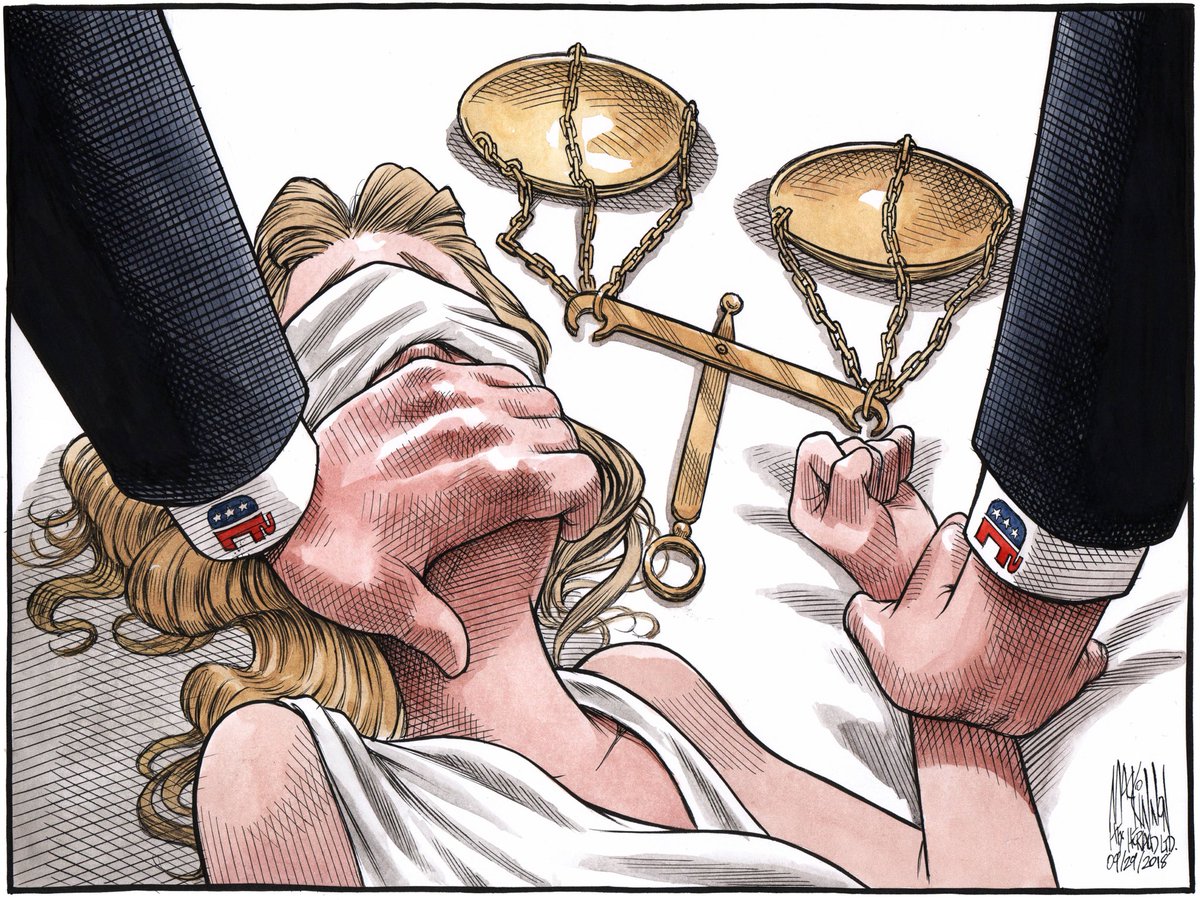 “The White House is limiting the scope of the FBI’s investigation into the sexual misconduct allegations against Supreme Court nominee Brett Kavanaugh,” NBC News reports.

“While the FBI will examine the allegations of Christine Blasey Ford and Deborah Ramirez, the bureau has not been permitted to investigate the claims of Julie Swetnick, who has accused Kavanaugh of engaging in sexual misconduct at parties while he was a student at Georgetown Preparatory School in the 1980s… A White House official confirmed that Swetnick’s claims will not be pursued as part of the reopened background investigation into Kavanaugh.”

Why not?  Because she is represented by Avanatti?

Avenatti said Saturday that he has “yet to hear from the FBI” — even after the agency reopened its investigation of the Supreme Court nominee, ABC News reports.  Avenatti, who represents Kavanaugh accuser Julie Swetnick, said on Saturday that he was ready to disclose to the FBI “all information and witnesses in our possession.”

The FBI has reached out to Deborah Ramirez, a woman who has accused Supreme Court nominee Brett Kavanaugh of sexual misconduct while they were students at Yale University, the Washington Post reports.  “The FBI has begun contacting people as part of an additional background investigation of Kavanaugh.”

“That’s what’s so disturbing. [Brett Kavanaugh] barely even had to try. And he’s still headed for a plumb lifetime position,” writes @hhavrilesky https://t.co/4kfY5oCmbf

Sen. Elizabeth Warren (D-MA) made her most definitive indication to date that she is mulling a run for the White House in 2020, telling a town hall crowd Saturday that she will take a “hard look at running for president” after the Nov. 6 midterm elections, the Boston Globe reports.

“Until now, Warren has responded to questions about her presidential ambitions by insisting she is focused on winning her re-election in November. On Saturday, she linked her potential interest in the nation’s highest office to the damage she sees President Trump doing to the country and, more recently, how Republicans have handled the sexual assault accusations against US Supreme Court nominee Brett Kavanaugh.”

Good.   David Atkins on Facebook made a point that I highly agree with: “I’m not voting for a man in the 2020 primary unless something really forces my hand to. [It’s one of the] biggest reasons I just can’t with Bernie 2020. He made a crucial contribution to the political moment and I was thrilled to vote for him in 2016. But America desperately needs a woman president now as an antidote to all this bullshit. It’s crucial.  Harris, Gillibrand and Warren are all at least OK. But of the three, Warren has by far the best politics and the best grasp of how to make structural progressive policy a reality.”

Column: Do we really want a man consumed with rage, self-pity and hate on the Supreme Court? https://t.co/OPFLe74Ki9 (via @AbcarianLAT)

Liz Swisher, a former Yale classmate of Supreme Court nominee Brett Kavanaugh, told CNN that she believes he lied under oath when testifying about his drinking to the Senate Judiciary Committee this week.

Said Swisher: “He drank heavily,” adding that he was a “sloppy drunk.”

She went on: “I don’t buy it. That’s not the Brett I knew, as soon as I met him in college. It’s not the Brett I saw during four years at Yale. And I don’t think many of his answers were credible. To lie under oath, to lie about that, then what else is true?”

The Republican Party has surrendered itself to a Trumpian agenda of the restoration of America’s traditional hierarchies of race and gender, and of vengeance against those who would threaten those hierarchies. Kavanaugh is a fitting champion for that. https://t.co/pkaUaDTGVk

“Track Palin was busted Friday night after Alaska State Troopers responded to a report of a disturbance at his home in Wasilla. Cops say their investigation revealed he assaulted a female acquaintance at the residence, then took her phone away when she tried to call authorities.”

“Track allegedly resisted the troopers while being placed under arrest as well.”

We’re entering into a period of social unrest. The Thursday's hearing is akin to throwing a Molotov cocktail on an already smoldering fire. https://t.co/P905gzYyvS

A new Change Research poll finds 51% of Americans wouldn’t vote to re-elect their senators if they vote to confirm Brett Kavanaugh.

A new YouGov survey finds that Americans believe Christine Blasey Ford was telling the truth about Kavanaugh assaulting her by 41% to 30%, while they are split on Kavanaugh’s honesty, 35% to 38%.

However, among those who reported having personally watched at least some of the hearings, 52% to 36%, that they believed Ford, while they were split 44% to 46% on whether they believed Kavanaugh.

The confirmation of an alleged sex criminal and self-professed enemy of the Clintons — who spent his final confirmation hearing telling bald-faced lies — will mobilize Democrats against Roberts’s majority in an unprecedented (and wholly avoidable) way. https://t.co/HD3LovNCAP

“An attorney for Leland Keyser stated plainly in a letter to the Senate Judiciary Committee that his client, a friend of Christine Blasey Ford, does not ‘refute’ Blasey’s sexual assault claim against Supreme Court nominee Brett Kavanaugh,” the HuffPost reports.

Walsh added that “the simple and unchangeable truth” is that his client is “unable to corroborate” Ford’s account because she does not remember it.

Said Pelosi: “I couldn’t help but think that if a woman had ever performed that way, they would say ‘hysterical.’”

Pelosi also said that she believed Kavanaugh’s testimony proved that he could not serve on the Supreme Court, because it showed that he is biased against Democrats.

She added: “I will say this — if he is not telling the truth to Congress or to the FBI, then he’s not fit not only to be on the Supreme Court, but to be on the court he’s on right now.”

Kavanaugh's plan to be confirmed to is be the Trumpy justice. It might work. https://t.co/dsSoj5BXem pic.twitter.com/6H59tWARi0

Jim VandeHei: “Imagine if Brett Kavanaugh had offered his emotional, tearful, you-ruined-my-life opening speech to the Judiciary Committee — and then called for a quick FBI probe to clear his name and perhaps find the true assailant. He would have looked confident, humble, even a tad heroic, given the president who nominated him opposed the FBI probe.”

“Well, he and Republicans had an epic failure of imagination: Instead, they were forced reluctantly and publicly into what should have been a fairly easy-to-anticipate moderate compromise: agree to a vote after a quick FBI probe.”

“Instead of looking hungry for truth, Kavanaugh heads into the week looking fearful of findings.”

Kavanaugh shredded the claim to judicial independence that he used as an excuse to skate past Jeff Flake’s questions, and myriad other questions, to get through his first hearing earlier this month. https://t.co/I5Mm54cOs6

“President Trump on Saturday kicks off a week of rallies in five friendly places around the country, seeking to shore up support ahead of congressional elections even as the fate of his pick to fill a Supreme Court vacancy remains unclear,” Reuters reports.

“Trump travels first to Wheeling, West Virginia on Saturday, where Republicans are trying to unseat Democratic Senator Joe Manchin, one of a handful of senators seen as key swing votes that will determine Kavanaugh’s appointment.”

“Trump will then hold evening rallies in Johnson City, Tennessee on Monday; Southaven, Mississippi on Tuesday; Rochester, Minnesota on Thursday; and Topeka, Kansas next Saturday.”

A federal district judge in Washington has ruled that a group of nearly 200 Democratic senators and representatives have legal standing to sue President Donald Trump to prove he violated the U.S. Constitution’s emoluments provision banning the acceptance of gifts from foreign and domestic interests.

The U.S. District Court Judge Emmet Sullivan on Friday found that lawmakers have adequately shown that they’ve suffered harm from the president’s alleged violation of the emoluments clause, which prohibit government officials from accepting benefits from foreign governments unless a majority of both houses of Congress consent.

The ruling was the second time a federal court judge has decided to advance such unprecedented constitutional lawsuits against the president.

Mike Allen: “If Kavanaugh is confirmed, Democrats could be expected to question the legitimacy of his swing Supreme Court vote. Congress degraded itself yesterday. And the Trump White House of course has serious credibility issues.”

“So the United States of America will be three-for-three in diminished trust in its branches of government.”

David Wasserman: “To Dems who can’t believe what they’re watching, remember: a majority of the Senate now represents 18% of the population and answers to a subset of voters that is considerably whiter, redder and more rural than the nation as a whole. That’s the reality of our times.”