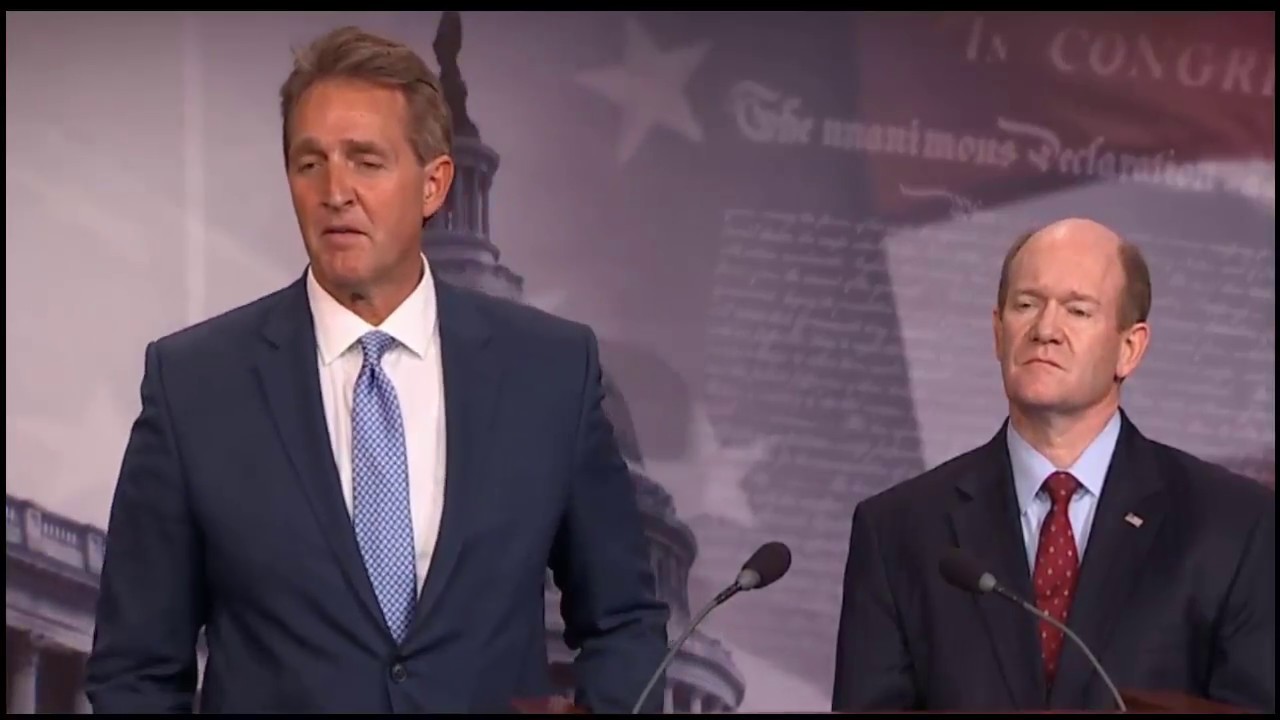 Senate Republican leaders formally agreed “to reopen the FBI background investigation of Judge Brett Kavanaugh after two key Republicans suggested they would not vote to confirm him to the Supreme Court without additional information on his alleged sexual misconduct while he was a teenager,” the Washington Post reports.

“Republican leaders said they still plan to move ahead with a procedural vote on Kavanaugh’s nomination on Saturday but will postpone a final vote on his confirmation that they had hoped would take place Tuesday.”

They were forced to after Collins, Manchin and Murkowski all supported Flake’s motion to delay the vote.  If McConnell and Trump powered through disregarding the Flake-Coons Deal, then the nomination would have failed on Tuesday.

BuzzFeed breaks down the dramatic moment when Sen. Jeff Flake (R-AZ) delayed the nomination of Brett Kavanaugh to the Supreme Court.

Mike Allen: “What if the week ends with the investigation ongoing, or if the probe uncovers new evidence outside the existing claims?”

“Such a delay presents both peril and promise for Kavanaugh. On the one hand, it means investigators will likely talk to Mark Judge. On the other hand, if a probe doesn’t turn up new evidence, it gives senators on the fence an easier time voting yes.”

Mark Judge, the man who was said to be present when Brett Kavanaugh allegedly sexually assaulted Christine Blasey Ford, was in Washington, D.C., meeting with his lawyer Friday afternoon, the HuffPost reports.

Judge arrived at the law firm just as the Senate Judiciary Committee was preparing to vote to advance Kavanaugh’s Supreme Court confirmation.

His lawyer issued a statement saying Judge “was willing to cooperate with any law enforcement investigation, so long as it took place ‘confidentially.’”

New from @RonanFarrow and me: E-mails Show That Republican Senate Staff Stymied a Kavanaugh Accuser’s Effort to Give Testimony https://t.co/iK2eql8AWA

The New Yorker reports that email correspondence between Deborah Ramirez’s legal team and Republican and Democratic Senate staffers “shows that a Republican aide declined to proceed with telephone calls and instead repeatedly demanded that Ramirez produce additional evidence in written form. Only then could any conversation about her testimony proceed. The exchange culminated in a breakdown of communication between the two sides, as Republican and Democratic staffers traded accusations of stonewalling.”

Ramirez told the New Yorker that Supreme Court nominee Brett Kavanaugh, her classmate at Yale, “had exposed himself at a drunken dormitory party, thrust his penis in her face, and caused her to touch it without her consent as she pushed him away.”

Sen. Jon Tester (D-MT) came out strongly against Brett Kavanaugh on Friday, saying he could not vote to confirm him to the Supreme Court over “concerns” about the judge’s record and the sexual assault allegations against him.

Sen. Joe Donnelly (D-IN), another red-state Democrat who voted to confirm Neil Gorsuch, also announced his plan to vote against Kavanaugh on Friday.

“While I would gladly welcome the opportunity to work with President Trump on a new nominee for this critically important position, if Judge Kavanaugh’s nomination comes before the full Senate for a vote under these circumstances, I will oppose it,” he said in a statement, in which said the sexual misconduct allegations facing Kavanaugh were “disturbing and credible” and deserved investigation by the FBI.

There was, in Brett Kavanaugh’s Trumpian performance, not even a hint of the composure one would think a potential Supreme Court Justice would have carefully cultivated. https://t.co/lZEg6WYDh8

“Kiah Morris, the only African-American woman in the Vermont House of Representatives, announced her resignation, a month after she ended her re-election bid because of what she described as a yearslong campaign of racially motivated harassment and threats,” the New York Times reports.

As Morris told the Washington Post: “The sacrifices were becoming too great.”

A new Florida Chamber of Commerce poll shows Andrew Gillum (D) has increased his lead over Ron DeSantis (R) in the race for governor to 6-points, 48% to 42%.

A reopened FBI background check on Kavanaugh may turn up nothing. But more time means more digging — including by reporters.

“A Russian-born American businessman who gave hundreds of thousands of dollars to support Donald Trump’s run for president in 2016 offered to brief a high-ranking Russian official during the final months of the campaign,” according to a series of emails reviewed by NBC News.

“The businessman, Simon Kukes, a Houston-based oil executive, sent an email to the official in Moscow in July 2016, boasting of his connections to the Trump campaign and requesting a face-to-face meeting.”

America, an influential Jesuit magazine, has rescinded its endorsement Judge Brett Kavanaugh to be on the Supreme Court.

“We continue to support the nomination of judges according to such principles—but Judge Kavanaugh is not the only such nominee available. For the good of the country and the future credibility of the Supreme Court in a world that is finally learning to take reports of harassment, assault and abuse seriously, it is time to find a nominee whose confirmation will not repudiate that lesson.”

“The super PAC will cancel its planned TV advertising for both members, a move that comes as the party refocuses its funds on races that leaders feel confident they can win — and away from those it sees as out of reach. The organization had $1 million in TV advertising reserved for Coffman and $2.1 million for Bishop, dollars that will now be redistributed elsewhere.”

President Donald Trump has signed an $854 billion spending bill to keep the federal government open through Dec. 7, averting a government shutdown in the weeks leading up to the November midterm elections.  That’s according to a White House official, speaking on condition of anonymity to discuss the action.

Trump’s signature avoids a shutdown before the Nov. 6 elections that will determine control of Congress. But he has expressed frustration that the bill doesn’t pay for his long-stalled wall along the U.S.-Mexico border.

“I remember thinking how some powerful men who see themselves as victims become so convinced that what they did was not wrong that it becomes indistinguishable from thinking they did not do it at all.” https://t.co/xzTtQXW9b0

Yale Law School, where Judge Kavanaugh studied, on Friday called for further investigation into the allegations against the Supreme Court nominee, the Wall Street Journal reports.

Said law school dean Heather Gerken: “Proceeding with the confirmation process without further investigation is not in the best interest of the Court or our profession.”

What happens next depends on what form the FBI investigation takes, what it produces, and how seriously various senators take the results https://t.co/L6VVrl3dUJ

First Read: “Another thing that struck us yesterday was just how empty questioning from the Democrats on the committee was. With some exceptions (Klobuchar comes to mind), they mostly lectured Kavanaugh and their Republican colleagues rather than trying to land a punch.”

“One obvious question not asked: Why do you think Dr. Ford is so certain that it was you? Another: Why couldn’t your July 1 calendar entry, which references some of the individuals Dr. Ford named, be the event in question? The GOP-hired attorney — who ironically did more damage to Kavanaugh than any Democratic senators — got close to addressing that July 1 question, but then Graham stole the show.”

“A federal judge on Friday gave the go-ahead to a lawsuit filed by 200 congressional Democrats against President Trump alleging he has violated the Constitution by doing business with foreign governments while in office,” the Washington Post reports.

“The lawsuit is based on the Constitution’s emoluments clause, which bars presidents from taking payments from foreign states. Trump’s business, which he still owns, has hosted foreign embassy events and visiting foreign officials at its downtown D.C. hotel.”

“The decision opens up yet another legal front for the president, who is now facing an array of inquiries into his business, his campaign and his charity.”