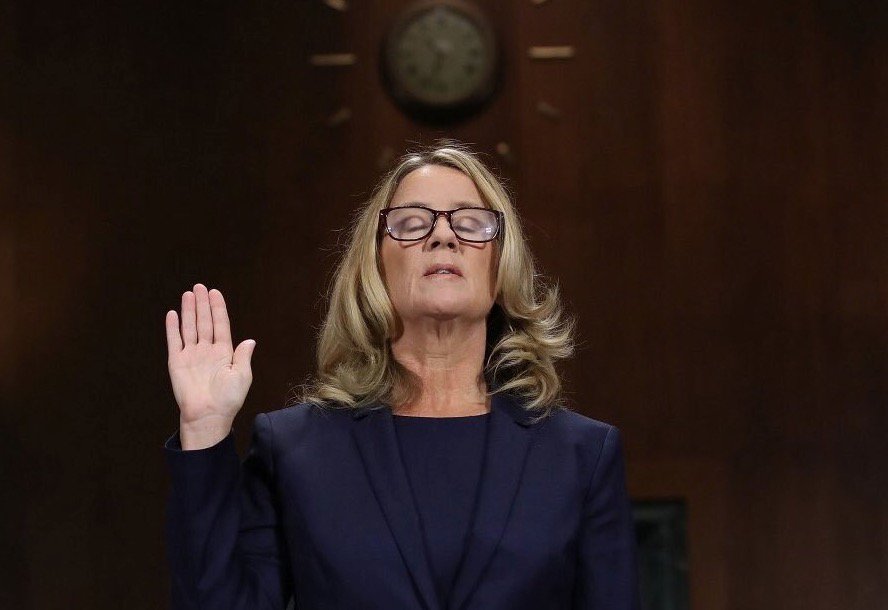 I believe her.  No one who watched her wrenching testimony could do otherwise.  It was as credible as you can ever get in life.   Judge Kavanaugh’s unhinged yelling angry response was exactly the response of an entitled piece of shit white man who has never once faced a consequence of any kind in his life for his actions.  How dare she or they deny ME my seat on the Supreme Court.  That was and is his attitude, and the Dr. Jekyl and Mr. Hyde nature of the pre accusation Kavanaugh and the post accusation Kavanaugh made Dr. Ford’s testimony and the other allegations all the more credible.  If the guy is this nasty and unhinged when he doesn’t get what he wants when he is sober, imagine how he is when he is drunk?

Judge Kavanaugh also revealed himself to be a partisan hack in his testimony, clearly showing animus to the left and Democrats.  So much for being a neutral jurist who is independent umpire who calls balls and strikes, like he pretended to be pre accusation.

He does not have the temperment to be a judge, let alone a Justice.  He must be impeached from the Circuit Court and disbarred immediately.

Markos Moulitsas examines the scenarios for the Republicans after yesterday’s hearings:

1. Forge ahead and confirm. Base is mollified, they have their pro-Trump vote on the high court, but they take a massive hit among white suburban women—the one demographic group that appears swingy at the moment. (Every other group is locked in and refusing to budge.) Republicans have already been losing those white suburban women this cycle. If they lose them long-term, their path to power is severely complicated.

2. Pull the nomination. Base is apoplectic, but they still have time to replace him with someone who isn’t rapey. The base remains furious at capitulation to the liberals, likely exacerbating losses this November. Red-state Democrats don’t have to vote against a Trump nominee, also helping their re-election efforts. Replace Kavanaugh with a female conservative, and Republicans can start working to win back those suburban white women ahead of 2020. Red-state Dems would likely play along.

3. Force a losing vote. Senate Majority Leader Mitch McConnell has threatened a vote whether he has the votes or not, in large part to force those red-state Dems into casting difficult votes. However, how difficult are those votes if it’s a bipartisan show of opposition? As of now, it’s not clear that Republicans have the votes, and it’s also not clear that the likes of Ted Cruz would be helped by such a vote. Too many Republican fates are in the hands of those suburban white women. Pissing them off could be more deadly than trying to keep the base in line.

And one more point: Kavanaugh’s story isn’t over. If and when Democrats take either chamber of Congress, investigations into his rapey past will continue. Criminal referrals will be made, and state authorities in Maryland have already indicated willingness to investigate. ”

Why Brett Kavanaugh's hearings convinced me he is guilty https://t.co/1WLrCFfuDS pic.twitter.com/MIGZucuUZh

Jonathan Chait: “Why do I believe Kavanaugh is lying? The charges are credible, and his accusers are willing to put themselves at risk, with no apparent gain to bring them to the public. Kavanaugh has said too many things that strain credulity for all them to be plausibly true. He almost certainly lied about having had access to files stolen by Senate Republicans back when he was handling judicial nominations in the Bush administration. His explanation that the “Renate Alumni” was not a sexual reference is difficult to square with a fellow Renate Alumnus’s poem ( “You need a date / and it’s getting late / so don’t hesitate / to call Renate”) portraying her as a cheap date. His insistence “boof” and “devil’s triangle” from his yearbook were references to flatulence and a drinking game drew incredulous responses from people his age who have heard these terms. His claim that the “Beach Week Ralph Club” was a reference to a weak stomach seems highly unlikely.

The accretion of curious details ultimately overwhelms the small possibility that he is a man wronged. The conviction he summoned is the righteous belief of an adult who feels he should not be denied the career reward due to him by the errors of his youth, and who decided from the outset to close the door to that period in his life. Perhaps he believes he has made amends for his cruelty. I see a liar who has the chance to prove his good faith innocence, and has conspicuously refused.

Sen. Lindsey Graham (R-SC) “erupted in anger during his turn to question Supreme Court nominee Brett Kavanaugh on Thursday, marking a pivotal turn away from the GOP’s previously measured attempt to rely on outside counsel for questioning the high court nominee,” Politico reports.  “It was a stunning moment, but one that had been coming for days for anyone watching the 63-year-old senator closely.”

“A furious Graham accused Senate Democrats of ‘the most unethical sham since I’ve been in politics’ — an effort to ruin Kavanaugh’s reputation and sink his nomination for the Supreme Court.” Said Graham: “What you want to do is destroy this guy’s life, hold this seat open, and hope you win in 2020.”   Hey Lindsay.  Merrick Garland.  And go fuck yourself you cowardly closeted traitor.

Chris Wallace calls the structure of the hearing a "disaster for the Republicans." pic.twitter.com/qEFn4OCrAa

Playbook: “There are a lot of Republicans who are already hoping that the White House will pull Brett Kavanaugh’s Supreme Court nomination — ‘today,’ as one put it to us…. Factions in and around the White House — Trump allies — are getting concerned. As we said this morning: It’s hard to see what Kavanaugh can do to change the strikingly difficult political dynamics. He has already said, without a doubt, that he did not do anything — that has left him no wiggle room. We’ve not spoken to a single Republican so far who thinks this is going well for them. Most think it’s an abject disaster.”

Graham: Blasey Ford just as much a victim as Brett Kavanaugh. Democrats owe her an apology. pic.twitter.com/MjUhZsOlcL

Emerging from a closed-door meeting late Thursday, GOP senators said the Senate Judiciary Committee would meet Friday morning to consider the nomination and a procedural vote by the full Senate would occur on Saturday, the Washington Post reports.

It's not hard to see why Republicans had hoped to avoid this hearing — because, throughout the spectacle, it wasn’t hard to see their party’s bad faith https://t.co/cTTLlxgFVI

Said Trump: “Judge Kavanaugh showed America exactly why I nominated him. His testimony was powerful, honest, and riveting. Democrats’ search and destroy strategy is disgraceful and this process has been a total sham and effort to delay, obstruct, and resist. The Senate must vote!”

Josh Marshall on Kavanaugh’s unhinged performance: “It had been telegraphed that he wanted to show more emotion than he had in earlier testimony. He certainly managed that. He testimony seemed openly partisan, showing his roots as more of a political operative than a jurist. His testimony was almost the definition of someone who lacks a judicial temperament. For all this though I also know I was not the intended audience. For that audience of Republican senators and Republican voters I do think he went some way to at least stabilizing the catastrophic damage he suffered this morning.

I think he quickly lost ground in his only questioning from Democrats. Yelling works better in a statement of defense than it does in a question and answer with a senator. Feinstein asked a straightforward question. He did not answer it.

Another point. There were various moments, bread crumbs spread through the statement that suggested Kavanaugh does not think he’ll ever make it to the Supreme Court. And I think this assumption shaped his testimony. He looked like someone cuing up another career.”

Sen. Bob Corker (R-TN) announced that he will vote for Supreme Court nominee Brett Kavanaugh, after the judge testified in response to allegations of sexual assault, The Hill reports.

Kavanaugh's partisan rage may please Trump and satisfy the Senate GOP, but it was completely improper for a sitting judge and a would-be justice https://t.co/ENTkQMeXzc

“Sen. Jeff Flake, seen as a key swing vote who could either put Brett Kavanaugh on the Supreme Court or kill his chances, is not committing to voting for the nominee at a Friday morning Judiciary Committee markup,” Roll Call reports.

“The Arizona Republican sounded very conflicted Thursday evening following a meeting of the Senate Republican Conference after the Judiciary panel spent nearly nine hours Thursday hearing from Kavanaugh and Christine Blasey Ford, who has accused him of sexually assaulting her at a party decades ago when they were both in high school.”

USA Today: “Flake spoke for only one minute and said little. His brief, but likely vital appearance, near the end of the daylong hearing lent a cliffhanger quality to a nomination still hurtling toward a dramatic finish.”

New York Times: “With millions of Americans alternately riveted and horrified by the televised drama, Dr. Blasey and Judge Kavanaugh left no room for compromise, no possibility of confusion, no chance that they remembered something differently. In effect, they asked senators to choose which one they believed. And in that moment, these two 100 percent realities came to embody a society divided into broader realities so disparate and so incompatible that it feels as if two countries are living in the borders of one.”

“It has become something of a cliché to say that the United States has become increasingly tribal in the era of President Trump, with each side in its own corner, believing what it chooses to believe and looking for reinforcement in the media and politics. But the battle over Judge Kavanaugh’s Supreme Court nomination has reinforced those divisions at the intersection of sex, politics, power and the law.”

The American Bar Association has asked the Senate Judiciary Committee to suspend its consideration of Brett Kavanaugh’s nomination to the Supreme Court until an FBI investigation is completed into multiple sexual assault allegations.

The four-paragraph letter, addressed to Senate Judiciary Chairman Chuck Grassley, R-Iowa, and ranking Democrat Sen. Dianne Feinstein, represented a stunning turn of events. The ABA had bestowed its highest rating of unanimous, “well-qualified” for the Supreme Court, and Kavanaugh pointed to the ABA’s support during Thursday’s proceedings.  So did Lindsay Graham in his unhinged defense of Kavanaugh.

“Each appointment to our nation’s Highest Court (as with all others) is simply too important to rush to a vote,” ABA President Robert Carlson wrote in the letter. “Deciding to proceed without conducting additional investigation would not only have a lasting impact on the Senate’s reputation, but it will also negatively affect the great trust necessary for the American people to have in the Supreme Court.”

“A man who owns strip clubs in Cleveland has flown Republican Senate nominee Jim Renacci to more than a dozen campaign events since July, including one Tuesday after the congressman from the Akron area skipped two roll-call votes to campaign in Ohio,” the Columbus Dispatch reports.

“Renacci said he paid a total of about $2,500 between January and June for the trips provided by Don Ksiezyk, who owns the Peek-A-Boos and the Bug-A-Boos clubs in Cleveland.”