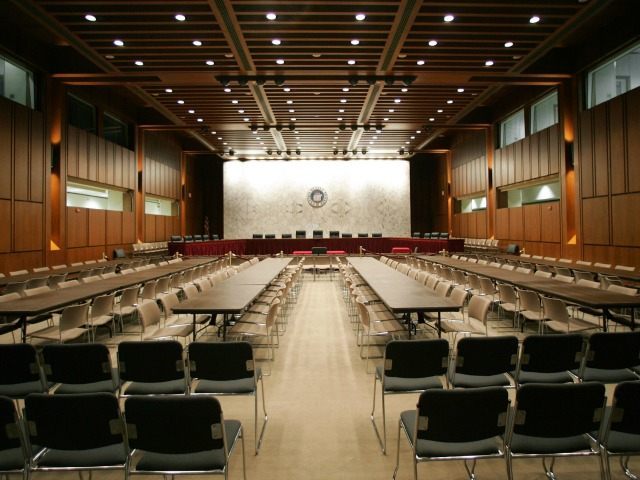 Republican investigators on the Senate Judiciary Committee are looking into “at least one additional allegation” of misconduct against Supreme Court nominee Brett Kavanaugh, NBC News reported Wednesday. Unnamed sources told NBC News that Kavanaugh denied the new allegation in a phone call with committee investigators Tuesday.  The allegation involves an incident in 1998 when the nominee was working for Ken Starr:

“According to an anonymous complaint sent to Republican Sen. Cory Gardner of Colorado, Kavanaugh physically assaulted a woman he socialized with in the Washington, D.C., area in 1998 while he was inebriated. The sender of the complaint described an evening involving her own daughter, Kavanaugh and several friends in 1998.  “When they left the bar (under the influence of alcohol) they were all shocked when Brett Kavanaugh, shoved her friend up against the wall very aggressively and sexually.”  “There were at least four witnesses including my daughter.” The writer of the letter provided no names but said the alleged victim was still traumatized and had decided to remain anonymous herself.”

President Trump said that the accusations against Judge Brett Kavanaugh, his Supreme Court nominee, “are all false,” but also said that he “can always be convinced” after watching the testimony of Christine Blasey Ford, who has accused the judge of attempted rape, the New York Times reports.

“In a rambling and combative news conference during which he lashed out against Democratic senators, Mr. Trump said that his own opinion about Judge Kavanaugh’s case is affected by the many allegations of sexual misconduct that have been leveled against him by women in the past.”

“Supreme Court nominee Brett Kavanaugh testified behind closed doors and under oath on Tuesday about allegations that he was present at parties in the 1980s where women were targeted and gang-raped,” Time reports.

“Speaking under penalty of felony to Judiciary Committee investigators, Kavanaugh denied the allegations. His latest round of sworn testimony took place one day before Julie Swetnick came forward publicly with a third round of allegations about Kavanaugh’s sexual behavior in high school and college.”

For the first time in ages, President Trump held an extended, solo press conference on Wednesday. It was full of baffling non sequiturs and defamatory insults https://t.co/xv1xpxhTGh

Sen. Susan Collins (R-ME), “who could determine whether Brett Kavanaugh gets a lifetime seat on the Supreme Court, raised serious concerns at a private meeting about the newest allegations of inappropriate behavior against the nominee — and questioned why the Senate Judiciary Committee had not subpoenaed a close friend of the federal judge,” CNN reports.

“Collins appeared unnerved by the latest allegation, citing in particular that it was a sworn statement sent to the panel, which carries with it the possibility of perjury for lying to Congress.”

Trump admits sexual assault allegations against him have affected his defense of Kavanaugh https://t.co/ssxX6pfkbr

Emily Jane Fox: “Seven Holton alums recently shared their experiences of sexual assault with me. Many had not spoken of the incidents since they occurred in high school or shortly thereafter. All of them said that they had not widely shared their stories out of shame, embarrassment, and fear of backlash. And they all felt compelled to come forward now to support their fellow alum, Dr. Christine Blasey Ford, and to change the culture of silence and misogyny they’ve experienced.”

Mark Judge's girlfriend is prepared to speak to FBI about what Judge told her about group sex episodes as part of a renewed background check investigation, her lawyer has informed the Judiciary Committee.

I've obtained the letter to the committee:https://t.co/Tm0coSd6MC

Greg Sargent: “The onetime girlfriend of Mark Judge, who is alleged by Christine Blasey Ford to have been present while Brett Kavanaugh sexually assaulted her in the 1980s, has emerged as a pivotal if hidden figure in this whole affair — and now she’s prepared to speak to the FBI and the Judiciary Committee about what she knows, according to a letter from her lawyer that I’ve obtained.”

Sen. Jeff Merkley (D-OR) “will announce that he’s seeking an injunction in federal court designed to stop a final vote on Brett Kavanaugh, asserting an obstruction of his constitutional duty to advise and consent on nominees,” Politico reports.

“Merkley’s still-pending filing in the U.S. District Court for the District of Columbia comes as Senate Republicans vow to push ahead with a vote on President Trump’s Supreme Court nominee in the coming days — and hours before a landmark hearing slated with Christine Blasey Ford, who has alleged a decades-old sexual assault by Kavanaugh.”

Such a lawsuit won’t go anywhere.   It will be dismissed on “Political Question” and “Separation of Powers” grounds, which means the Court will not resolve a matter that is properly left to the legislature and its procedures.

Trump: Women are the angriest about how Judge Kavanaugh is being treated. pic.twitter.com/9DNHzwpiTL

NBC News: “Senate Republicans don’t yet have the votes to confirm Supreme Court nominee Brett Kavanaugh, even as Majority Leader Mitch McConnell is projecting a public face of certainty.”

“But while vote-counters are closely watching a few GOP senators considered to be most threatening to the confirmation, several more Republicans are monitoring events as they unfold and want to see how the hearing with Kavanaugh and Christine Blasey Ford, who has accused him of sexual assault in high school, will play out on Thursday.”

Said Sen. Bob Corker (R-TN): “I know the media keeps characterizing three or four people, but I feel like it’s a large number of them that want to see firsthand the accusation and the rebuttal, and again, will be looking at it in a very sober way. So I think it’s much larger than you think.”

Trump says China is interfering in the 2018 midterms: "They do not want me or us to win" https://t.co/ePSY1BzKEa

Playbook: “The White House and Hill Republicans say they think President Trump will sign the spending package that the House will pass today to avert a partial government shutdown. But there is a palpable fear lingering in the Capitol that Trump will want to distract from the Brett Kavanaugh hearing, and will do so by vetoing the bill, plunging the nation into crisis 41 days before Election Day. A few White House sources say the fear is unfounded, but a lot of people are on edge at the moment and that fear won’t lift until Trump’s signature is on the bill.”

Speaker Paul Ryan said President Trump has told him he will sign a spending bill to avert a government shutdown, the Washington Post reports.   Said Ryan: “I’m confident he will sign it. … This funds our military, this funds opioids, this does a lot of the things that we all want to accomplish together and we’ve had very good conversations with the president.”

.@RonBrownstein has this right but, if anything, understates the degree to which l’affaire Kavanaugh will reverberate well into the 21st century regardless of whether he ends up on the Supreme Court. This will not be a mere asterisk or footnote in historyhttps://t.co/IAwuWUEnRT

Sen. Dianne Feinstein told Politico that she has now identified another area in which she believes Brett Kavanaugh was not truthful in communications with senators.

“She said that by directing officials to speak to reporters during the investigation of President Bill Clinton, Kavanaugh may have violated grand jury secrecy laws — even though he told her and Sen. Sheldon Whitehouse (D-RI) he never broke those rules.”

I just finished reading the testimony that Dr. Ford will give tomorrow in front of the Senate Judiciary committee. Heartbreaking, terrifying. Completely. Gutting.
My heart hurts for Dr Ford. https://t.co/wwSG1N8JQA

“The House GOP’s campaign arm pulled the plug on its remaining ad buys last week for the Pittsburgh media market, where Rep. Keith Rothfus (R-PA) is desperately fighting to hang on to his seat in a race against Rep. Conor Lamb (D-PA),” The Hill reports.

“It’s grim news for Rothfus, who has largely been seen as a dead man walking since redistricting left him with a Democratic-leaning district and a difficult opponent in Lamb.”

“For the GOP, it’s likely a sign of things to come as the party seeks to target its money toward the races most likely to save its majority. Democrats need 23 seats to take back control of the House, and the GOP is defending dozens of seats that are seen as vulnerable.”

At one point during his press conference, Trump claimed that the sexual-misconduct allegations against him have shaped his view of Brett Kavanaugh, his Supreme Court nominee, @GrahamDavidA writes: https://t.co/A9xQRGUjWS

John Clune, the attorney for Deborah Ramirez, Judge Brett Kavanaugh’s second accuser, told the Today Show that Ramirez would be willing to testify about her allegations: “She would be willing to testify but we can’t even talk with the Senate Judiciary Committee about what that would look like and they certainly haven’t invited her, so at this point it’s a moot question.”

He added that his client would prefer an FBI investigation first: “It’s the only intelligent way to get to the truth of what happens.”

Axios: “Emails show negotiations between Ramirez’s attorney and Republicans on the Senate Judiciary Committee are at an impasse. Republicans have requested that Ramirez provide evidence of her allegations before moving forward, while her legal team has requested an FBI investigation.”

New York Times: “Mr. Trump’s aggressive comments on Tuesday came after privately expressing concern that Judge Kavanaugh had been too weak during an interview on Monday night on Fox News. The judge denied the allegations against him in a calm way, growing a little emotional at the end, but the president and some of his advisers worried that he was not forceful or indignant enough. Judge Kavanaugh repeated some of the same scripted lines repeatedly, to the point that some of his allies believed it came across as robotic.”