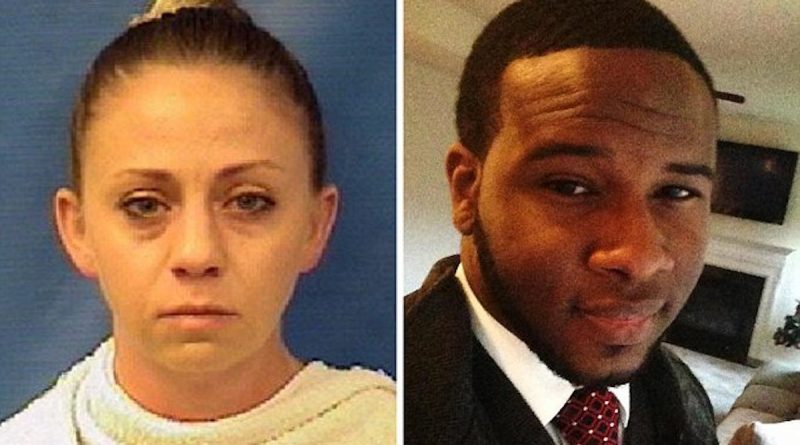 I can’t come up with one valid excuse for killing a man in his own home, but Amber Guyger is sure trying.

By now, everyone has heard the story of Amber Guyger killing Botham Jean in his own home – a story Guyger keeps changing.

What’s more confusing is Guyger’s ever-evolving story. She went from claiming she “struggled with the lock” to the state of Texas affidavit claiming the door was ajar. She told Texas Rangers on the search warrant affidavit filed on Saturday that she was “attempting to enter the apartment with a set of keys” when Jean “confronted the officer at the door.” Which statement is true? Why do the events of that day keep changing?

According to the police affidavit, Guyger claims that she accidentally parked on the fourth floor of her building after working a 15-hour shift and walked to what she thought was her apartment to find the door ajar. She claimed in the affidavit that the lights inside the apartment were off and that she gave verbal commands before firing her service weapon, killing Jean.

The door matters. If it was locked (1st story) and her key didn’t work, then her first thought would be to blame the key/lock and think she’d have to call someone in maintenance to let her in. Anyone who’s been in this situation (most likely in hotels) knows that they check all sorts of things if their key doesn’t work – the room number, the paintings on the wall, decorative plants, anything to confirm they are at the correct door. Guyger only needed to look down at the bright red doormat to know she was at the wrong door.

There’s also her statement that Jean confronted her at the door – but that, of course has changed. She ends up (finally) with the door being ajar, because if it was ajar then her first thought is danger.

As a cop’s kid, I know procedure – and procedure has her calling this in before entering the apartment. But Amber didn’t call the “ajar” door in.

There are also witness:

Merritt also noted that the two witnesses who claimed to have heard knocks on Botham’s door and a female voice shouting, “Open up. Let me in,” before shots were fired are female roommates and neighbors of Botham.

Both roommates were home at the time, but one roommate was closer to the incident and told Merritt “the voice didn’t sound like an officer command; it sounded like someone who wanted to be let into the apartment,” the attorney said.

The woman also told Merritt that after the gunshots she heard a man’s voice say, “Oh my god. Why did you do that?”

And… there were noise complaints.

“The only connection we have been able to make is that she was his immediate downstairs neighbor,” family attorney S. Lee Merritt told CNN host Brooke Baldwin on Tuesday.

Like I said, I don’t know what happened. What I do know is that I don’t believe Amber Guyger’s ever-changing story.

6 comments on “I Don’t Know What Happened In Botham Jean’s Apartment, But Amber Guyger’s Story Doesn’t Add Up”